How portrayals of the NFL are shaping criminal justice reform

From ads to documentaries, the issues of criminal justice are portrayed in simplistic and highly political ways 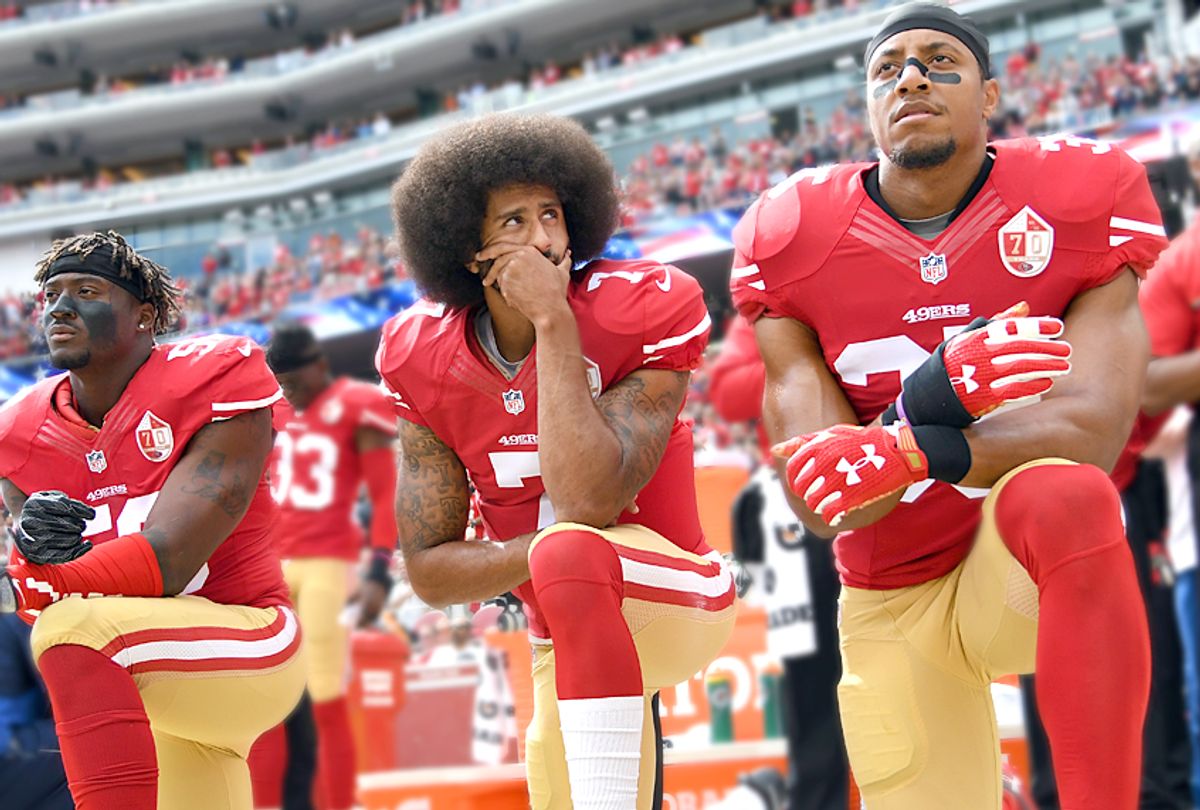 During the Super Bowl, crime and criminal justice reform were front and center in an ad supporting Donald Trump's campaign for re-election. Commercials for the NFL's Inspire Change program (the league's social justice initiative) also highlighted these issues. Inspire Change was created in partnership with the Players Coalition, a group founded in 2017 amid Colin Kaepernick's iconic protests.

These ads appeared as we were still digesting the unsettling Netflix true crime series about former NFL player Aaron Hernandez, who was convicted of murder in 2015 and died by suicide in 2017.

Having conducted research on the media coverage of Hernandez, we are left wondering how the true-crime documentary and Inspire Change ads are connected.

Inside the mind of a killer?

"Killer Inside: The Mind of Aaron Hernandez" explores aspects of his life as potential explanations for his demise: the death of his father, his years in the University of Florida football program, his drug use and acquaintances with criminal records and his chronic traumatic encephalopathy (CTE) diagnosis. The series also foregrounds revelations that Hernandez had sexual relationships with men. It questions how his actions might have been influenced by life as a closeted gay man in a notoriously homophobic football culture.

The series does not arrive at a clear conclusion for what happened to Hernandez. This has been a source of frustration for critics who have panned "Killer Inside" for needlessly complicating what they consider to be the seemingly obvious root causes of Hernandez's crimes.

These criticisms, however, offer a misguided suggestion that clear answers are possible, even in cases as complicated as Hernandez's. This aligns with what we found in our research. Our study shows that journalists made causal inferences about how Hernandez's volatile upbringing or CTE symptoms prompted his violent actions. These inferences tended to rest on rudimentary allusions: either racialized stereotypes about Hernandez falling into "gangsta life" after his father's death or simplistic assumptions about brain damage causing criminal acts.

"Killer Inside" offers something more complex. It reflects what we and some criminologists have argued: that our knowledge of specific acts of crime is usually partial. The commentators in the film — police officers, attorneys, academics, friends and family members and even recordings of Hernandez himself — provide only fragments of the events, possible motivations and social forces that affected Hernandez.

"Killer Inside" helps viewers see how causes of deviant behaviour are rarely straightforward.

Scholars have argued that in the absence of perfect evidence we often depend on familiar stories about crime to piece together a version of events. In this way, "Killer Inside" relies heavily on popular narratives of crime and punishment. It attempts to add intrigue by emphasising Hernandez as uniquely committing crimes as an active player — even though the NFL has a sordid history of players coming under criminal investigation. The portrayal of Hernandez's trials brings to mind an episode of "Law & Order" with dramatic courtroom scenes interspersed with comments from officials and attorneys.

The Netflix documentary shows the trial of Hernandez as a drama like an episode of "Law and Order" when the truth about the criminal justice system is often more complicated.

"Killer Inside" also taps into the allure of deep dives into intimate details of Hernandez's life. This format follows true crime conventions and mirrors the storytelling dynamics of popular television shows such as "Criminal Minds." In fact, the series subtitle, "The Mind of Aaron Hernandez," puts focus squarely on his psyche and sells the series as providing windows into his innermost thoughts.

In doing so, "Killer Inside" lacks critical reflection on the criminal justice system. Although the series points to problems within college and professional football, it does not consider how the justice system often fails to counteract cycles of violence or support victims. We see this in the portrayal of the family of Odin Lloyd, the man Hernandez was convicted of killing. Their pursuit of justice is shown to be resolved through what is ultimately a punitive reform to the Massachusetts criminal code: the repeal of abatement, a law that dissolves convictions under appeal upon a defendant's death.

"Killer Inside" positions the Hernandez story firmly outside of broader criminal justice debates.

This lack of critique is perhaps not surprising. But it still perpetuates an unquestioned vision of criminal justice narrowly built around identifying and punishing perpetrators. This vision draws attention away from social structures and institutions that contribute to inequitable practices of criminalization.

If the Hernandez documentary is the crime story that everybody's talking about, then the film's narratives can influence other conversations about criminal justice reform. This is especially important as we see this issue implicated in election campaign messaging.

"Killer Inside" informs a cultural context in which politicians can co-opt criminal justice reform as an election issue while still reinforcing misguided assumptions about violent crime, ignoring policing's racist origins and propping up individualized, behaviour-based solutions to systemic problems.

These approaches to criminal justice reform lose sight of the calls for systemic change central to Black Lives Matter and Kaepernick's protest. These movements both highlight how common reformist agendas, such as anti-bias training or diversity initiatives, are not enough to stop police violence.

As we encounter campaign messages built on individual stories of wrongs being righted, we should ask critical questions about how presidential contenders — President Trump chief among them — reaffirm systems and practices that unjustly oppress and criminalize many persons and communities.

Yet, as the NFL continues to face questions about the Hernandez case and Kaepernick's unsigned status, the coexistence of "Killer Inside" and the Inspire Change ads is a reminder of football's power to influence politics. We can believe current and former players are doing meaningful work through Inspire Change. That said, we must first acknowledge that the NFL has also undermined calls for police accountability by stifling protest.

In an election year, these connections show how political conversation around criminal justice is shaped by conversations happening far off the campaign trail.