This isn't an election: It's a civil war, and our side isn't necessarily winning

Trump has cut the heart out of our democracy, and he's not finished. If we don't end him, we lose everything 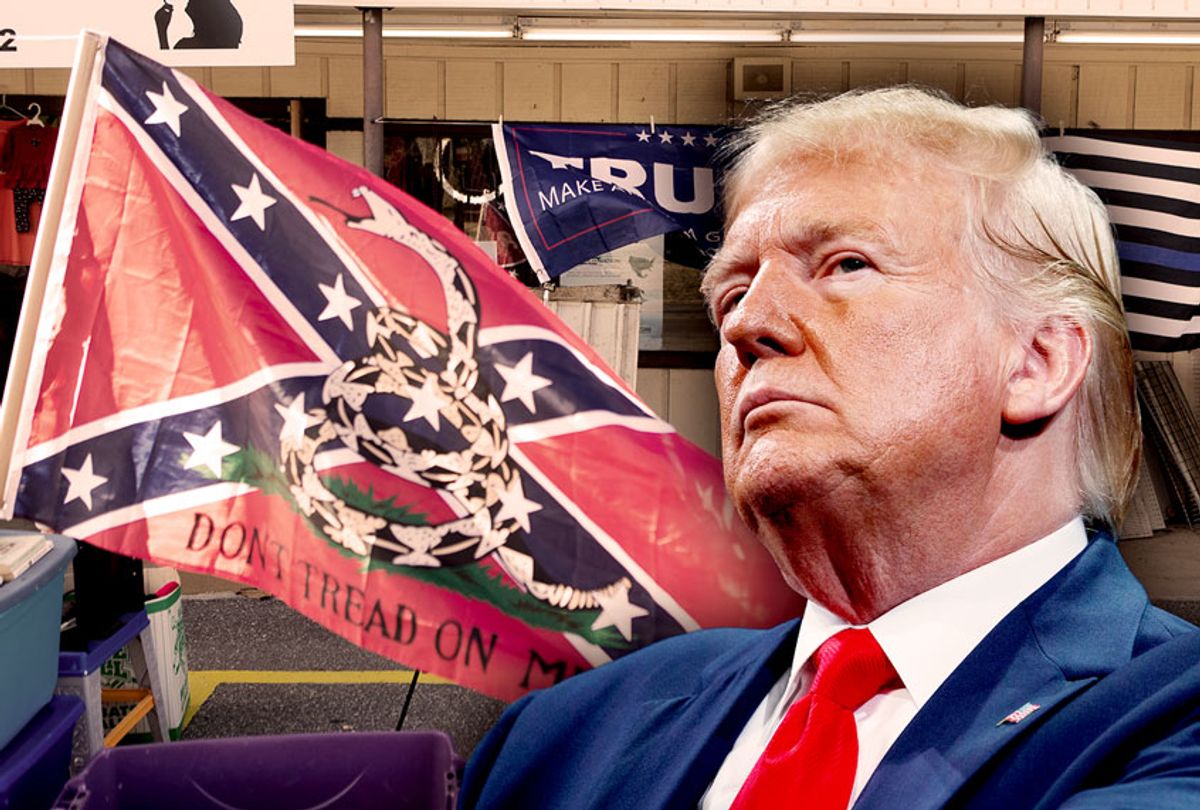 In what amounted to a casual aside at his rally in Colorado Springs on Thursday night, Donald Trump drew the battle lines in this election as clearly as I've heard them drawn yet. Facing another of his virtually all-white audience in the city that is headquarters to multiple fundamentalist sects and several Christian megachurches, Trump waved his arms and asked, "By the way, how bad were the Academy Awards this year?" The crowd jeered loudly. "Did you see it? And the winner is … a movie from South Korea! What the hell was that all about?" he went on with undisguised disgust. "We got enough problems with South Korea with trade. On top of that, they give them best movie of the year? Was it good? I don't know. Let's get 'Gone With the Wind'! Can we get 'Gone With the Wind' back, please?"

Trump may as well have waved a Confederate battle flag. The crowd knew exactly what he meant. "Make America Great Again" now had a point of origin, and the greatness they yearned for had not been expressed by the Oscar win of "Parasite" director Bong Joon-ho or, God forbid, the election of Barack Obama, but by Rhett Butler and Scarlett O'Hara.

Trump is letting us know that he and his base don't think of this as an election. It's a civil war. They want to turn the clock back to the time that Negroes knew their place and women were happy making biscuits in the kitchen and employers could pay their workers anything they wanted and the question of who got to vote was decided by a few white men in a smoke-filled room.

Look around you. With William Barr at the Justice Department and Brett Kavanaugh and Neil Gorsuch on the Supreme Court and Senate Republicans voting in lockstep with Mitch McConnell, living in Donald Trump's America feels like the South won the Civil War. If we don't get our shit together and drive him from office at the ballot box in November, we'll lose this one, too.

Trump made use of an enemy foreign power, Russia, to win election in 2016, and if what the intelligence community told the Congress this week is correct, he's in the process of doing it again. There won't be any investigation of foreign interference this time. What did the Mueller investigation accomplish? Sure, there were a few months when it looked like it would go somewhere. I mean, Trump's people had been running all over the place meeting with Russians in cigar bars, and Roger Stone was on the phone to WikiLeaks, and there was a department of the FSB (Russia's equivalent to the CIA) devoted to hacking the Democrats and a whole goddamned building in St. Petersburg posting on Twitter and running Russkie bots through Facebook. And then Trump fired Jim Comey and had Sergey Kislyak and Sergey Lavrov into the Oval Office, where he told the two Russians the "pressure is off."

And then Trump's hand-picked shithammer, William Barr, dug a hole right under his office window in Washington and threw Mueller's 400 pages in, shoveled in some dirt, and it was like the whole thing had never happened.

The stunning thing is, Trump keeps getting caught and nothing happens. His entire administration leaks like a collapsed dam. Every time he does something cruel or stupid or even illegal, somebody calls a reporter or blows a whistle. Look at the Ukraine scandal. Everything from Trump's phone call to Ukrainian President Volodymyr Zelensky to Rudy Giuliani's latest bowel movement was exposed, and yet the effort to impeach him was doomed from the start.

Even the House testimony by 10 people from Trump's own administration had no effect, like the appearance by my old friend Bill Taylor. I kept waiting for him, or one of them anyway, to get up there and metaphorically grab the members of the committee by the lapels and yell, "Don't you see what the fucker did? He bribed a foreign government using our tax dollars to help him get elected!"

Then the impeachment trial in the Senate took place, and Adam Schiff got up there and said exactly that, and what did they do? Republicans voted in lockstep to acquit him and nothing happened. There were no consequences for Trump, and now he's unbound. He's going to accept Russian help with his campaign right out in the open, and he'll stand up at one of his rallies and look into the cameras and say, "I did it, and fuck you."

Donald Trump is who he always was: a mobbed up grifter from New York who learned from his father that you can welch on debts, pay people off and game the system, and when you get caught, walk away. If you're outrageous enough about it, people will be so stunned they are unwilling or unable to act. Trump's old pal Roy Cohn was a past master at this. I covered him while I was on the staff of the Village Voice. He used to travel around the country giving speeches in smaller cities to Republican gatherings that were all impressed they could get Roy Cohn to come to Sheboygan or Zanesville and speak at their fundraisers. He would meet a local banker over rubber chicken and talk him into a signature loan for 50 or 100 grand, and he'd take the money and stiff them every time. He was sued over and over again by these little local banks, and he never paid a cent.

That's Trump's philosophy in a nutshell: do whatever you want and say "Fuck you." He's getting away with it the same way he got away with stiffing contractors and welching on bank loans and going into bankruptcy and taking out more loans and when they come due saying "Fuck you."

I think we stand a chance to beat him, but we'll have to dig ourselves out of a deep, deep hole when he's gone. Some of us never will: The children ripped from their mothers' arms at the border, the voters who will go to the polls and be turned away, the poor who will go hungry when their food stamps are cut, the land and water and air that will be despoiled, the species that will go extinct, the companies that will fail, the women whose health clinics will close, the hopes that will be dashed and gone away forever.

Trump has cut the heart out of America. He's turning our democracy into a dictatorship, and he's not finished.