Is Trump trying to turn the Border Patrol into a "national police" force? At least his fascism isn't subtle 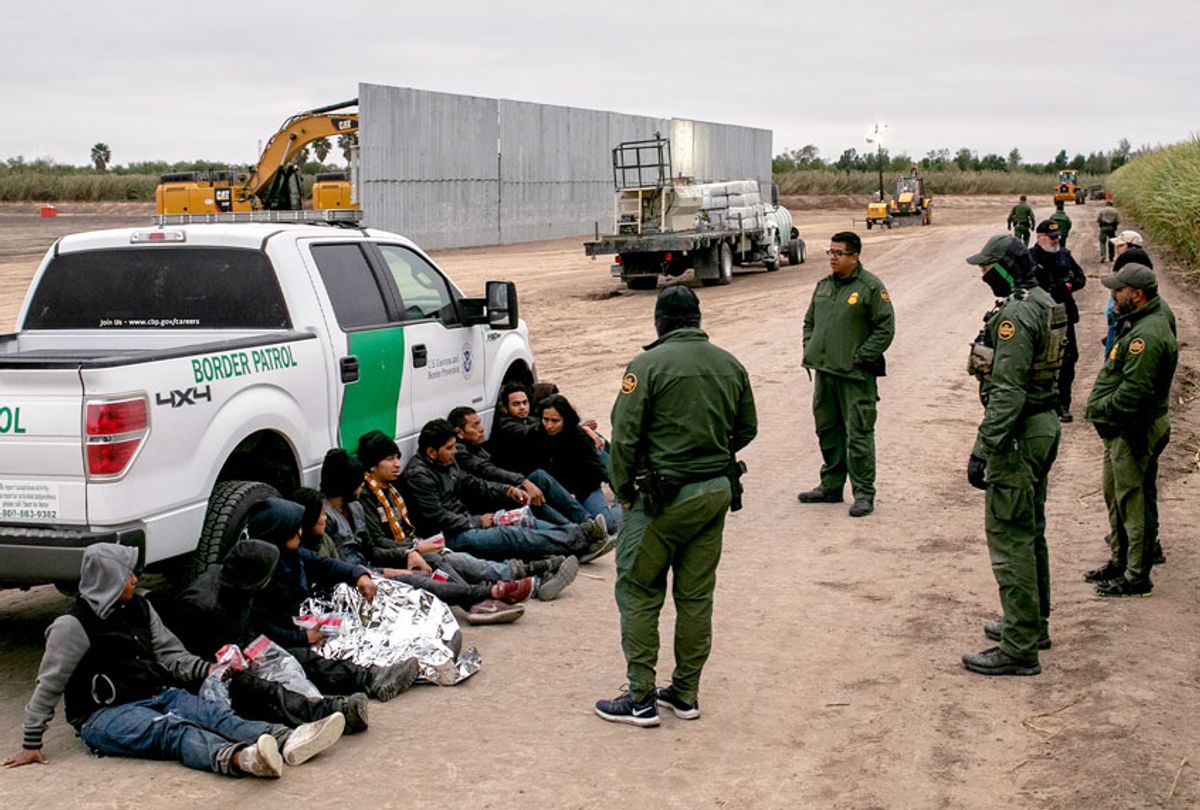 U.S. Border Patrol agents detain undocumented immigrants caught near a section of privately-built border wall under construction on December 11, 2019 near Mission, Texas. The hardline immigration group We Build The Wall is funding construction of the wall on private land along the Rio Grande, which forms the border with Mexico. The group, led by former Trump strategist Stephen Bannon claims to have raised tens of millions of dollars in a GoFundMe drive to build sections of wall along stretches of the U.S. southwest border with Mexico. (John Moore/Getty Images)
--

The authoritarian does not make idle threats. He makes promises and then follows through on them.

Three years into Donald Trump's term, and with eight months to go until Election Day 2020, the gears of his cruel machine grind on. He and it will never be satisfied.

Trump's proposed 2021 federal budget includes billions of dollars to expand his system of detention centers and concentration camps, build more of his wall along the U.S.-Mexico border, and deploy more ICE, Border Patrol and other paramilitary forces.

Last week, the Trump administration announced that elite Border Patrol units would be deployed to "sanctuary cities" such as Chicago, New York, Los Angeles, San Francisco and elsewhere, where they will be used to assist regular ICE agents.

This is the next stage in the Trump regime's campaign of violence, threats, intimidation, harassment and brutality against nonwhite migrants, immigrants and refugees.

[R]ecently spent some time talking privately with a former Washington DC CBP senior management official. This is what stuck with me: Border Patrol does not believe they are a civilian law enforcement agency. They believe they are kin to the Marine Corps.

Border Patrol believes it is not required to answer to local police, FBI, CIA or any other law enforcement agency. They claim to be the "premiere" law enforcement agency [sic], superior to all others. They say they will become a "national police force." To be used by a president to enforce laws even among citizens.

Last year it was reported that Donald Trump's ICE enforcers — a group that works in tandem with the Border Patrol — would soon be training in facilities designed to simulate the buildings they might encounter in American cities and towns, often hundreds of miles from the Mexican border.

Elite Border Patrol and ICE shock troops are trained in the tactics, strategies and weaponry used by special forces and other commandos. An ability to simulate raids and other operations in and against "sanctuary" cities enhances their capabilities.

It is important to make clear that "sanctuary city" is itself a misnomer. These are not hives of murderers, rapists and other evildoers — the people from Latin America who Trump and his minions describe, in classic eliminationist rhetoric, as "snakes," "invaders" and vermin – but rather communities where local governments have decided not to cooperate with federal law enforcement in harassing residents.

The Trump regime's use of elite Border Patrol enforcers and other agents of the state to hunt down nonwhite people who are marked as being "illegal" is not new.

Some historical analogies can mislead, granted, but we should be mindful of the lessons from history that can shine light on our current humanitarian crisis. The first is that evils we had thought long banished from civilized societies can reappear, and with alarming speed. From concentration camps for Uighurs in China, the largest mass-detention since the Holocaust, to migrant detention centers in America, we're seeing an increase in the systemic internment of human beings worldwide. In the US, perhaps the most fraught example is Fort Sill, Oklahoma, an Army post proposed as a migrant detention center. Fort Sill symbolizes a bloodline of state-sponsored cruelty throughout American history, first as a reservation for dispossessed Native Americans, then as an internment camp for Japanese-American citizens during World War II, and now in its present planned use by ICE as a holding pen for migrants. ...

The second lesson from history is how quickly such measures can be accepted as necessary, even "natural." That ordinary people of any ethnicity or nationality can partake in and support evil actions at any time is not news to historians. The blithe assurance of top advisers like Stephen Miller and senior bureaucrats like Kirstjen Nielsen who devise cruel policies to suit the needs of the system they're working within, and implement them seemingly without thought, recalls Hannah Arendt's "banality of evil." More shocking is that many border patrol agents appear not only to be following orders but, according to a recent ProPublica report, have paraded their own racist, misogynistic, and sadistic tendencies in Facebook posts. That the Trump administration has announced new nationwide raids by ICE agents recalls the kidnappings and roundups by nineteenth-century slave-catchers and federal marshals.

Who will be hunted down by Trump's elite ICE enforcers and their confederates?

The targets will most certainly not be the undocumented immigrants aliens from Eastern Europe, Ireland and Italy who can be found in Boston, New York, Chicago and other American cities. Trump's targets are nonwhite people.

As historian Richard Frankel explains in his new book "States of Exclusion: A New Wave of Fascism," the Trump regime's coordinated campaign of violence and stochastic terrorism against nonwhites and other groups deemed to be Other is a recurring and central feature of racial-authoritarian regimes. Frankel writes:

For Trump, "making America great again" means making it a white, Christian, male-dominated society. With the authoritarian powers he desires, he could maintain the appearance of democracy, while in reality, only "real" Americans would enjoy certain rights. The rest, having been pushed to the margins of society, would be subject to the whims of Trump's autocratic regime. And those pushed beyond the boundary? They would no longer be of any concern to "real" Americans. It's a vision reminiscent of Hitler's effort to create his ideal national community — a society in which only "real" Germans would enjoy the benefits of citizenship.

Right now there are no trains taking tens of thousands of people to some horrible destination. But that's no reason for complacency. Americans right now are being stripped of their citizenship. They are being "legally," if not yet physically, removed from the national community that Donald Trump, Stephen Miller, and others hope to forge. They are Hispanic Americans. But for those who are not Hispanic, that is also no reason for complacency. For the president considers many more people — American citizens all — to be undesirable, damaging, dangerous elements, who must be removed."

In fact, as revealed by a recent trove of emails Trump adviser Stephen Miller actually wants to use trains to deport migrants, immigrants and refugees because it would serve as a tactic of terror and intimidation given that imagery's evil history.

Racial authoritarianism is not an abstract concept. It is both a noun and a verb. In the United States and elsewhere, it takes the form of both structural and interpersonal violence against nonwhite people in service to a belief and a goal that white people should always and forever be the dominant group in American society – even if that means that the country is no longer a democracy. To accomplish that goal the Trump regime, its allies, and enforcers are participating in a campaign of "soft ethnic cleansing" against non-whites.

There are many examples:

Republican policies of voter suppression and intimidation (and in some cases outright vote theft and fraud) against nonwhites and other Democratic Party voters, the gutting of civil rights programs, and the enactment of policies that will disproportionately hurt nonwhite people are all part of an effort to overthrow America's multiracial democracy to ensure that white people (and specifically rural conservative white Christians) remain in disproportionate control of the country's political, economic and social power.

The "Muslim ban" and other changes to the country's immigration policies ordered by Donald Trump (and as urged by Stephen Miller) also serve the goal of maintaining a white majority through the soft ethnic cleansing of nonwhites and other racial "undesirables" (e.g., Muslims).

In these discussions about assaults on the rule of law, democratic norms, the Constitution, America's multiracial democracy, and the country's political culture and traditions more generally, one should always ask "What is this an example of?"

The question and its answer help us to see the truth in a moment of malignant reality where the truth — along with empirical reality itself — is under siege in the Age of Trump. Loss of perspective is one of the primary means through which authoritarianism becomes normalized within a society.

Trump's latest assaults against nonwhite people are of course an example of demagoguery, cruelty and the use of the law to advance inhumane ends that run contrary to the common good as well as international law and civil rights. But Trump's decision to use elite Border Patrol enforcers in a campaign of terror against "sanctuary cities" is another example of the gross hypocrisy of the American right-wing.

For many decades (if not much longer, if one goes back to the antebellum period) the American conservative movement has raged about the "evils" of "big government" and the need to defend and protect "states' rights." But such outrage is always contingent and circumstantial.  In practice, the American right and white America more generally are willing to embrace "big government" when it serves their goals.

Trump is deploying federal forces to counter how sanctuary cities have decided to manage their own local affairs. Trump has threatened to delay or withhold federal disaster assistance and other aid to the people of California and Puerto Rico because he views them as "enemies" of his regime.

Trump believes that the Constitution gives him unlimited power to act as he wishes unopposed and without limits. This, of course, is a lie. Last Wednesday, Donald Trump even threatened a federal takeover of San Francisco and Los Angeles because of the homelessness crisis in those two cities.

Trump and the Republican Party love "big government" if it means advancing their goals of taking away women's rights to control their own bodies. Likewise, "big government" is desirable if it means oppressing nonwhite people, gays and lesbians, and other marginalized groups. Big government is fine if it means that Trump and his agents can interfere in the efforts of individual states to protect their elections from foreign interference, or to take other lawful actions that run counter to Trump and his regime's personal or political interests.

In his farewell address, George Washington warned that political parties and their resulting polarization would, "make the public administration the mirror of the ill-concerted and incongruous projects of faction, rather than the organ of consistent and wholesome plans digested by common counsels and modified by mutual interests. However combinations or associations of the above description may now and then answer popular ends, they are likely, in the course of time and things, to become potent engines, by which cunning, ambitious, and unprincipled men will be enabled to subvert the power of the people and to usurp for themselves the reins of government, destroying afterwards the very engines which have lifted them to unjust dominion." (Emphasis added.)

Washington was warning the American people about men such as Donald Trump.

On Election Day 2020 the American people must vote against Donald Trump as if their personal safety, security and freedom depend on it. After all, they do. If Trump is not stopped, his machinery of cruelty will at some point gobble all of us up. No voter or pundit or observer can claim defense of ignorance or surprise because Trump, the wannabe dictator, is neither subtle nor covert with his plans and ultimate goals.