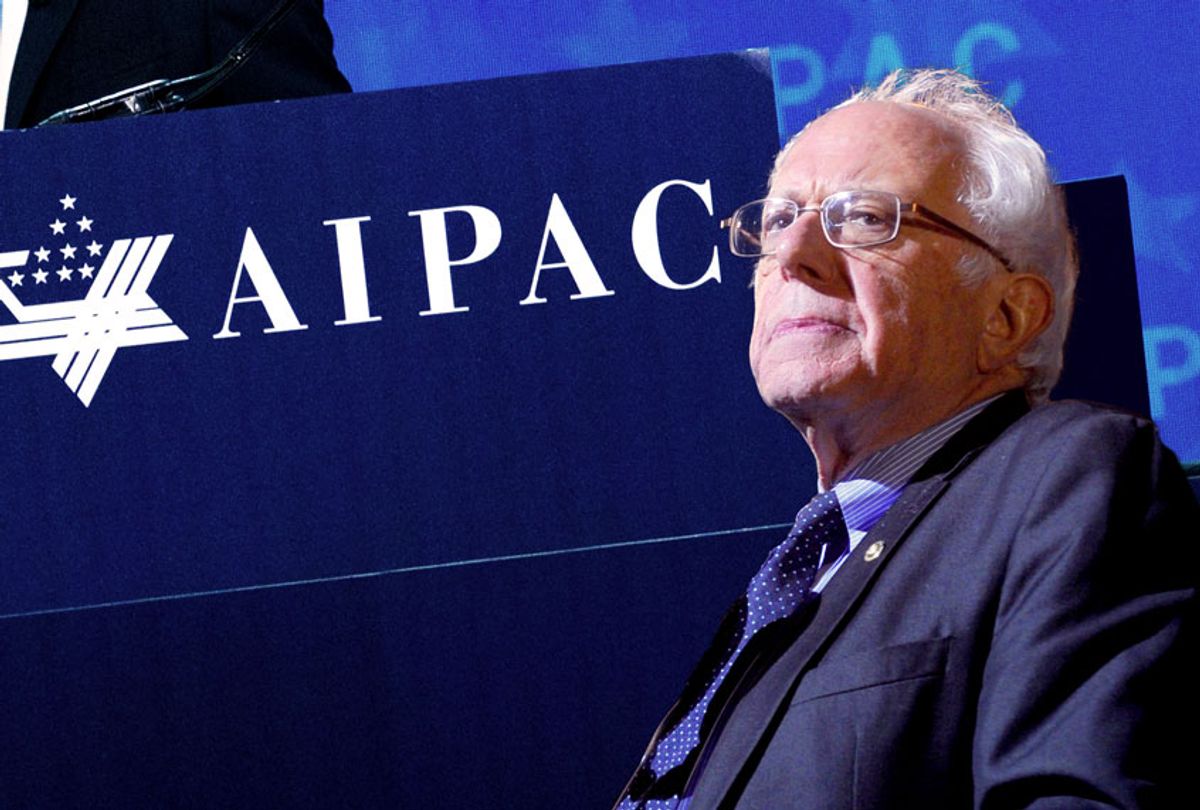 Sen. Bernie Sanders, the apparent frontrunner in the Democratic presidential race, said on Sunday he would not attend this year's American Israel Public Affairs Committee (AIPAC) conference, saying that the group offers a platform to leaders who "express bigotry."

Sanders wrote on Twitter that he would not attend the conference held by the pro-Israel lobbying group because he is "concerned about the platform AIPAC provides for leaders who express bigotry and oppose basic Palestinian rights." The comment appeared to reference Israeli Prime Minister Benjamin Netanyahu, who Sanders ripped as "racist."

Sanders is far from the first Democrat to criticize AIPAC. Rep. Betty McCollum, D-Minn., ripped the organization as a "hate group" that was "weaponizing anti-Semitism" after it tried to "demonize" what she called her "support of human rights for Palestinian children." The group issued an apology after it came under fire for ads that accused "radical" Democrats in Congress of posing a threat "maybe more sinister" than ISIS. Numerous Democratic candidates did not attend the conference last year, including Sen. Elizabeth Warren, former South Bend, Indiana, mayor Pete Buttigieg, Sen. Kamala Harris, Sen. Kirsten Gillibrand and former HUD Secretary Julian Castro, along with Sanders, Warren has also said she would not attend this year either.

Sanders has repeatedly criticized the group, which has reportedly helped fund attack ads against him in key primary states, and is certainly no fan of Netanyahu.

"I am not anti-Israel. But the fact of the matter is Netanyahu is a right-wing politician who I think is treating the Palestinian people extremely unfairly," Sanders said at a CNN town hall event last year. "What I believe is not radical. I just believe that the United States should deal with the Middle East on a level playing field basis."

AIPAC issued a statement in response to Sanders' comments on Sunday calling his remarks "truly shameful."

"Senator Sanders has never attended our conference and that is evident from his outrageous comment," the group said. "By engaging in such an odious attack on this mainstream, bipartisan American political event, Senator Sanders is insulting his very own colleagues and the millions of Americans who stand with Israel."

Sanders' comments came under criticism from Jonathan Greenblatt, the head of the Anti-Defamation League, who called his remarks "offensive."

"At a time when we see a surge of real hate across the U.S., it's irresponsible to describe AIPAC like this," he said.

The progressive Jewish group IfNotNow, on the other hand praised Sanders' statement. "We are grateful for your commitment to freedom and dignity for all Palestinians and Israelis," the group said.

AIPAC has long been controversial for what many see as an outsize influence on American foreign policy.

Jewish activist Rafael Shimunov argued that Sanders' position on Israel and Palestine is "completely in line with Israel's own peace movements, including Prime Minister, heads of security, and Supreme Court."

"But when uttered in the U.S., [Sanders' positions] are called anti-Semitic at worst and naive at best," he added.

Progressive Jewish activist Ady Barkan urged other candidates to skip AIPAC. "fFor me, being Jewish means struggling for justice and liberation," he said in a statement. "AIPAC is a central pillar of the occupation and it is long past time to dismantle both."

"Last year, AIPAC gave press credentials to TruNews — a site so anti-Semitic that it was just banned from YouTube," added fellow Jewish activist Sophie Ellman-Golan. "This year, AIPAC has ramped up its attacks on anyone who doesn't unconditionally support the Israeli government. Those are not my Jewish values."