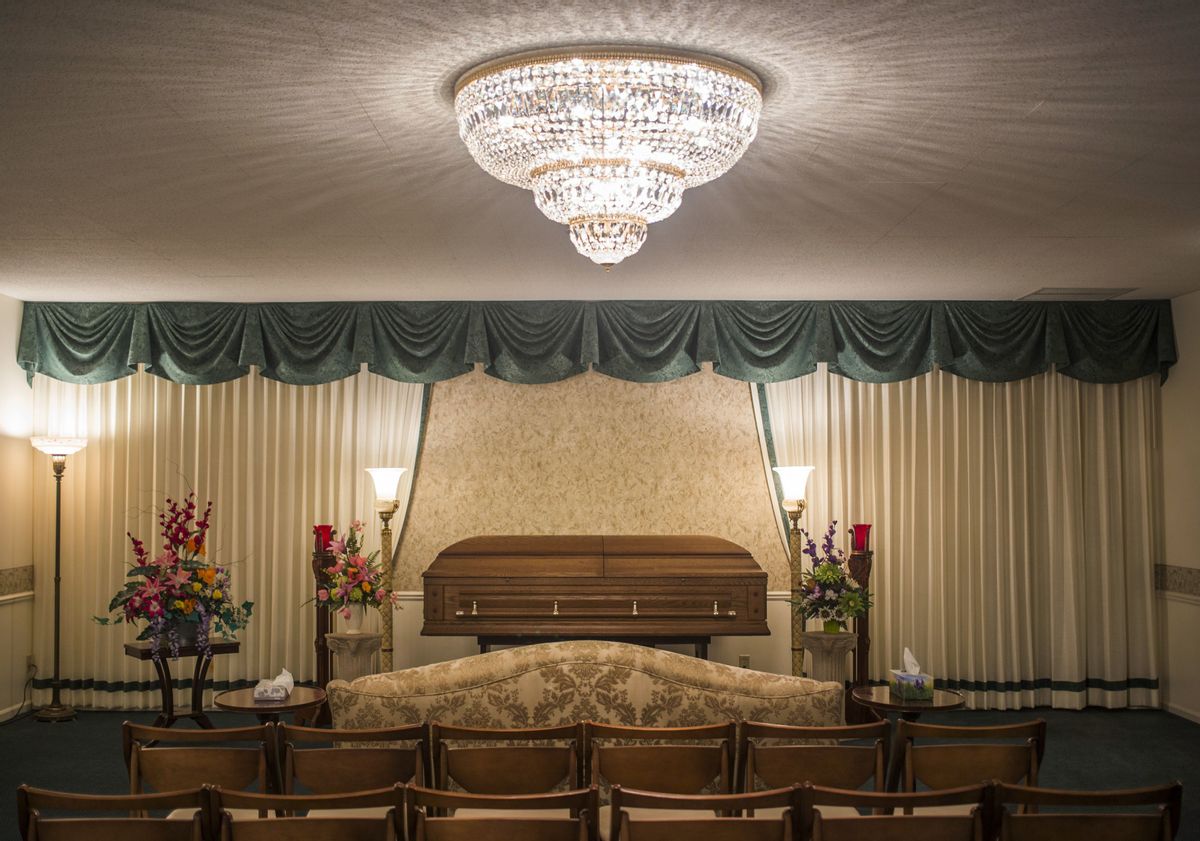 This Monday, Jan. 25, 2016 photo shows a room inside a funeral home in Saginaw, Mich. According to a study by the government released on Thursday, Dec. 8, 2016, life expectancy in the United States has fallen for the first time in more than 20 years. (Katy Kildee/The Saginaw News - MLive.com via AP) (AP)
--

When a family member dies, the last thing relatives want to do is shop around for an affordable casket. Now a new report has found that funeral homes that fail to provide easy access to their prices online tend to charge significantly more than homes that clearly list their fees.

The report by two nonprofits, the Funeral Consumers Alliance and the Consumer Federation of America, focuses on California and illustrates the huge pricing gulf for the same services among 120 mortuaries in the state. For instance, the cost of a simple cremation ranged from $525 to $4,115, while the cost of burial without a casket ranged from $495 to $4,715.

"If you don't take control by comparing prices, it's very easy to pay four, five, six times what we consider to be a reasonable rate," said Josh Slocum, executive director of the Funeral Consumers Alliance. "I do not think $4,000 is a reasonable price for cremation."

Nationally, wide pricing disparities for funeral services have prompted consumer advocates and regulators for years to push for greater transparency.

In 2013, California became the first and only state to require some form of online pricing disclosures. Under the law, a funeral home is required to either post a complete general price list on its website, or list 16 kinds of services and merchandise, along with a note saying the price list is "available upon request."

Advocates like Slocum see the latter requirement as a "loophole."  The newly released report surveyed 120 funeral homes in California and found that 34 of them did not list their prices online. And homes with prices disclosed online "tended to charge much lower prices than did those who used a loophole in the state law to hide their prices."

"To their credit, most of the funeral homes decided to post their prices," said Stephen Brobeck, a senior fellow at the Consumer Federation of America. "But about a third chose to use the loophole to hide their prices."

Bob Achermann, the executive director of the California Funeral Directors Association, objects to that characterization.

"It's not a loophole, it's the way the law is written," he said. He defended the right not to post prices online, saying, "We believe in offering funeral homes flexibility."

A survey conducted by the National Funeral Directors Association last year found that only 17 percent of customers visited or called more than one funeral home when planning a funeral. Of those, more than half – 58 percent – said it was either "easy" or "very easy" to obtain pricing information.

"People with a little bit of patience can look around and make decisions," said Achermann. "What someone wants to pay is really a matter of preference."

Most of the funeral homes without posted prices are part of Dignity Memorial, the largest chain in the U.S. with more than 1,500 homes. The company is owned by Service Corporation International, a publicly traded company based in Houston. According to the report, the cost for basic services at Dignity Memorial homes in California is 48 percent higher than the average home that does post its prices.

Dignity Memorial did not respond to requests for comment.

Slocum noted that funerals are not like other purchases for consumers. They're something that a person typically only pays for once or twice in a lifetime. And shopping for one is not exactly a happy occasion.

"There's a reason why funeral homes are regulated," said Slocum. "Their customers are grieving people that are buying something for a dead person. This is an emotion that is not duplicated in any other transaction. Grief compromises your rational frame of mind."

The federal government is considering its own changes to pricing disclosure requirements for funeral homes.

In 1984, the Federal Trade Commission passed the "funeral rule," which among other things mandates that mortuaries offer customers the ability to purchase separate services a la carte, as opposed to a package-only deal. The rule also states that funeral homes must hand over a price list to any customer. But the law hasn't been updated since 1994, which means it says nothing about price disclosure online.

Earlier this month, the FTC announced  it will seek public comment and consider making changes to the funeral rule. The Funeral Consumers Alliance has urged the FTC to make funeral homes disclose their prices on their websites. Two commissioners released statements saying they would like to see the rule updated. Commissioner Rebecca Kelly Slaughter said, in her statement, "I worry that the rule is now showing its age, and I look forward to hearing from commenters about what a funeral rule for the twenty-first century should look like."