Please, can we not let the 2020 election turn into another Boomer Greatest Hits retread?

Free advice for Bernie Sanders: This election has to be about the 21st century, not "We Didn't Start the Fire" 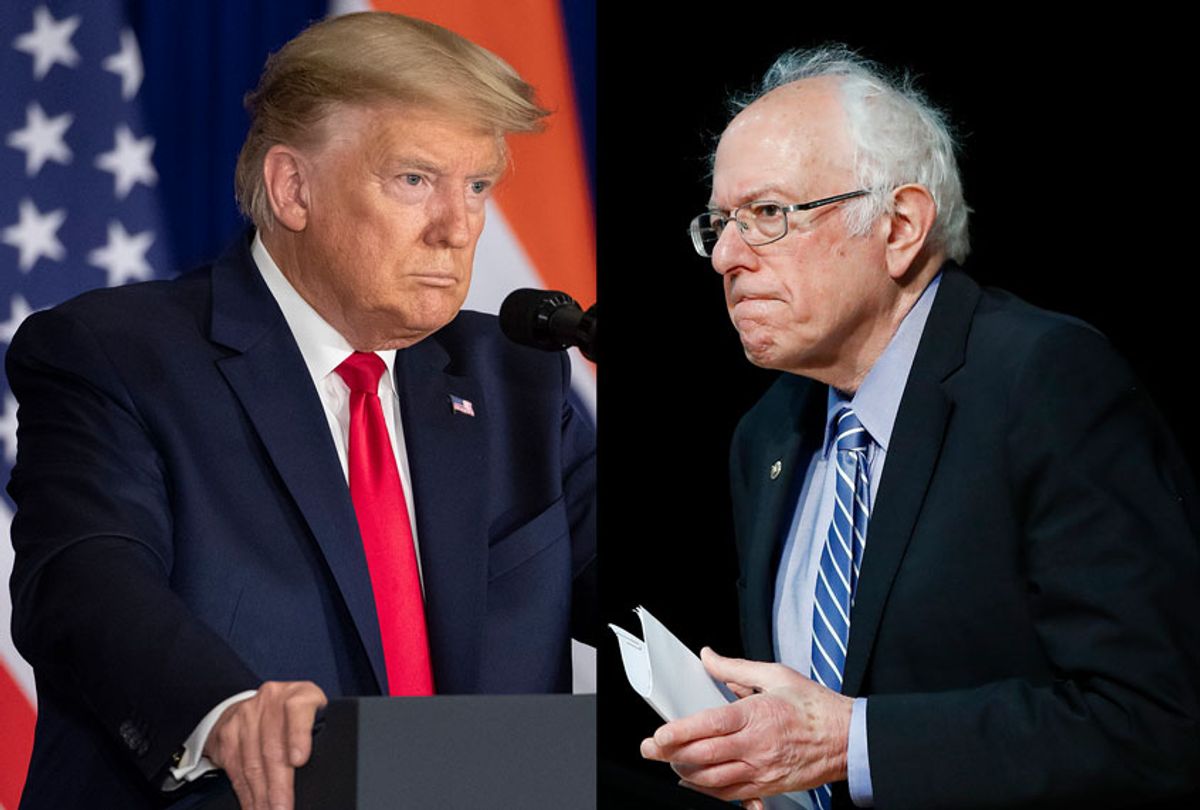 On Monday morning, feeding my unhealthy habit, I pressed the Twitter application on my iPad and was immediately confused. The year, as far as I knew, was 2020, yet there was a vicious debate scrolling in my feed over the civil war that engulfed Nicaragua when I was a small child. Red-hot arguments about the Sandinistas versus the Contras were being rolled out, as if that conflict was being freshly fought, instead of part of the era when MTV actually played music videos.

Swiftly, the provocation that set off this re-litigation of this proxy Cold War conflict became clear: Republican-turned-Never-Trumper pundit Ana Navarro-Cárdenas, a Nicaraguan-American, had tweeted Sunday night that she was in the second grade when the Sandinistas brought in the "Cuban education model" under which children "had to recite communist, revolutionary, anti-American slogans."

It appeared she was responding to comments from Sen. Bernie Sanders of Vermont, the current frontrunner in the Democratic primary, on "60 Minutes" Sunday night. Sanders was asked to respond to an '80s-era video in which he said that the reason Cubans hadn't turned against Marxist dictator Fidel Castro was that he "educated their kids, gave them health care." When host Anderson Cooper asked modern-day Sanders about it, Sanders said that while he denounces "the authoritarian nature of Cuba," it's not "a bad thing" to have "a massive literacy program," even if it was Castro who had done it.

Watching all this go down, my mental state is reduced to that gif of Tommen Lannister on "Game of Thrones" jumping out a window. The issue isn't that Sanders is wrong in his analysis or that Navarro's critics were wrong to point out that the U.S.-supported Contra rebels were worse than the Sandinistas. No, the problem is that if we let the 2020 election turn into yet another debate rehashing the political controversies of the baby-boom era, then Donald Trump is going to win.

Look, American politics has a boomer problem. The infamous narcissism of that generation, combined with the tendency of national politicians to be on the older side, means that election after election becomes not about the future, but about the past: Boomers fight and refight the battles of their youth and early middle age, like an elderly couple who are still bickering about some slight from their first year of marriage.

It's a politics that is no doubt satisfying for the Me Generation, who enjoys reliving those "We Didn't Start the Fire" political hits. And it's fun for political nerds of the younger generations, such as those Twitter warriors currently showing off their supposed historical knowledge by debating the Sandinista revolution and the right-wing counterattack. But holy crap, it's a politics that is extremely irritating to most potential Democratic voters, who want their politics to be about the future, not rehashing the past.

The former mayor of South Bend, Indiana, and current Democratic primary candidate Pete Buttigieg — who is 38 years old — touched on this point in Tuesday night's debate, when the subject of Sanders's comments on Cuba came up: "This is not about what coups were happening in the 1970s or '80s, this is about the future. This is about 2020. We are not going to survive or succeed, and we're certainly not going to win, by reliving the Cold War."

Buttigieg, who is loathed by the smart set of progressive Twitter, got dragged for this comment and accused of "red-baiting." That's fun for them, but frankly irrelevant to nearly all the 49.71% of the U.S. population that was born after 1980, and sees the Cold War mostly as the background for period pieces like "The Americans." Hell, I was born in 1977 and it's mostly an abstraction to me, nearly as distant as World War II is to the oldest boomers.

Sanders — who is technically too old to be a boomer, but was in the thick of political activism in the prime Boomer years — has attracted a large following of young people in no small part because he has largely avoided, until now, this tedious politics of revisiting the battles of the '60s, '70s and '80s. Even though it's a cliché among his supporters to say he's been saying the same thing for 40 years, he really does a great job of speaking almost strictly in terms of the present day and the future.

That's threatening to get derailed by this Cuba nonsense, which is being imposed on Sanders against his will, but which he is not doing a good job of shoving away. On the contrary, as this past week has shown, once baited into a Boomer Greatest Political Hits debate, Sanders has a hard time pivoting back to the 21st century.

On Monday, Sanders continued to argue the point, noting that Castro had "formed the literacy brigade" and that "teaching people to read and write is a good thing."

In the debate Tuesday, Sanders responded to the Cuba baiting by insisting that "when dictatorships, whether it is the Chinese or the Cubans, do something good, you acknowledge that. But you don't have to trade love letters with them."

The issue here isn't that Sanders is wrong on the substance. He's not. The issue is that, by getting sucked into debating Cuba-U.S. relations during the Cold War, Sanders is letting this election get boomerized. Unfortunately, history also shows that it rarely works out for Democrats when elections get swamped by boomers rehashing decades-old political debates.

From the time I was old enough to vote until Barack Obama ran for president, the debate that bogged down every presidential election was the Vietnam War, which literally ended before I was born. One white male Boomer candidate after another — Bill Clinton, George W. Bush, Al Gore, John Kerry — got caught up in ugly debates about whether they served, whether they dodged the draft, or whether they served with honor. It was demoralizing to those of us who were too young to care about such matters, since we were more worried about whether we would get health care or have a job after college.

When Barack Obama ran in 2008, a friend noted to me he was just glad that Obama had been too young for the draft during the Vietnam era, which meant we could finally have an election about something else than boomer navel-gazing about that traumatic conflict. Obama's popularity with young voters probably owed a lot to this freedom he had to wrest himself away from the constant rehashing of Cold War politics and, instead, talk about the future.

After that brief respite, however, we're looking at the strong possibility of another election between two older men who are easily defined in these boomer-centric ways.

For Trump, that's not a problem — in fact, it's his brand. "Make America Great Again" is about tapping directly into the most right-wing version of boomer nostalgia. Trump loves talking about urban life as if he's describing the plot of a "Dirty Harry" movie. He rants and raves about "political correctness." which is another boomer retread from the '80s and '90s, come back in zombie form for our current era. Keeping our country from progressing into the future, but instead keeping us stuck in a horrific time loop of politics from a bygone era, is exactly what works for Trump. He's dying to make the 2020 election all about that.

Arguably, this is a big part of why Trump won in 2016. Hillary Clinton was bogged down in all those boomer fights from the '90s over the '60s — not to mention current boomer fights about the '90s. Her inability to escape the gravitational pull of being a controversial figure at the height of '90s boomer narcissism sank her ability to generate anything close to the enthusiasm Obama had created.

If Sanders can't find a way to get that albatross off his neck, it's going to hurt him badly, especially with those younger voters that his campaign is banking on turning out. Millennials and the emerging Gen Z voters want to hear about Sanders' plans for universal health care and free college education. They aren't going to be nearly as keen on listening to endless political squabbles that should have shut down decades ago. Hell, even the forgotten Gen-Xers are generally not big fans of watching our boomer elders act as if all relevant politics ended in 1995.

My advice, if anyone is interested, is for Sanders to stop trying to defend his past comments on Cuba or Nicaragua, and instead call out this 20th-century rehash for what it is: A pointless distraction. The smart thing to do is to swipe Buttigieg's language about how he doesn't want to relive the Cold War but to talk about the future. Sanders is excellent at mocking bad questions from journalists and refocusing the discussion on his talking points. There's no reason he can't do it when people ask him about past debates over communist dictatorships.

Of course, it isn't too late, either, for Democratic voters to take another look at candidates who — by virtue of their age or having spent the prime boomer years as apolitical law professors — have no Boomer baggage to worry about. But since such a sudden shift in tides is unlikely at this point, it would be great if Sanders could figure out how to avoid talking about politics from 30 or 40 years ago. He needs to focus on what will win, which is talking about politics in the 21st century, where his side has most of the strongest arguments.