The CDC issued a public health safety warning about possible pandemic. Trump is pissed that it scared investors 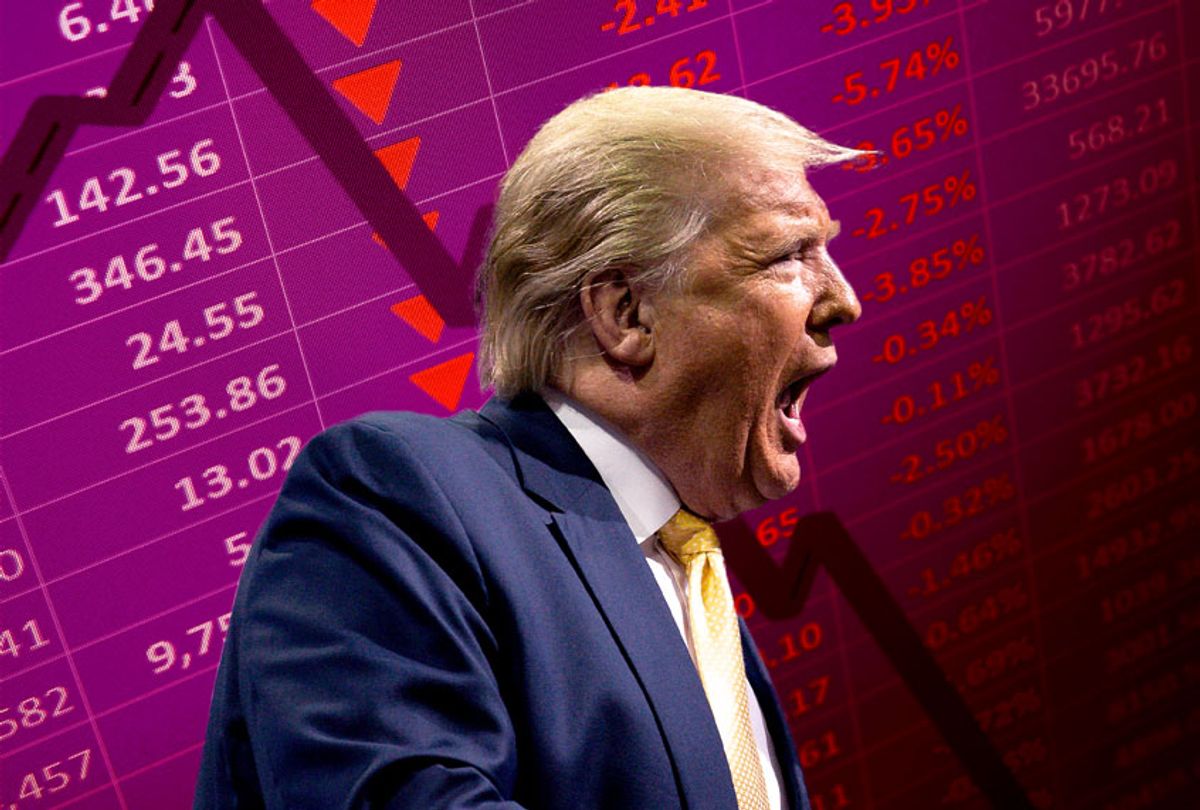 President Trump lashed out at Democrats and the media after the stock market plunged amid fears of a coronavirus pandemic.

The Dow Jones fell by more than 1,000 points on Monday and nearly another 900 points on Tuesday as investors reacted to the virus that appears to be spreading rapidly around the world. Trump grew "furious" over the stock market slide, The Washington Post reported, and blamed the Centers for Disease Control and Prevention (CDC) for issuing "extreme warnings" that he believes "spooked investors." White House officials are also unhappy about how Health and Human Services Secretary Alex Azar has handled the administration's response.

Trump, who spent months attacking former President Barack Obama over his handling of the Ebola outbreak in 2014, has repeatedly sought to downplay the threat posed by the virus.

He pushed a widely disputed claim that the virus would go away on its own when the weather got warmer and falsely claimed during his trip to India that the number of cases in the U.S. had fallen. In fact, the number has continued to rise, and there are now more than 50 cases in the U.S.

The CDC further undercut Trump's rosy predictions on Tuesday when it announced that an outbreak in the US was likely inevitable.

"It's not so much a question of if this will happen anymore but rather more a question of exactly when this will happen and how many people in this country will have severe illness," Dr. Nancy Messonnier, the CDC's head of the National Center for Immunization and Respiratory Diseases, said during a press briefing on Tuesday. She added that Americans should prepare to telecommute to work, have their kids attend "teleschool," and avoid large gatherings of people at places like churches if the virus spreads in this country.

Harvard epidemiologist Marc Lipsitch told The Atlantic that an outbreak in the U.S. and all around the world was probably inevitable because many people who contract the virus do not show any symptoms even as they spread it to others. Lipsitch estimated that 40% to 70% of the world's adult population may get infected. He stressed that many people would not get ill and that the virus has a much lower fatality rate than previous outbreaks like SARS (severe acute respiratory syndrome) and MERS (Middle East respiratory syndrome). More than 80,000 people around the world have been infected with coronavirus and nearly 3,000 have died, according to the World Health Organization.

Lipsitch warned the real number of cases in the U.S. may be much higher than is known because most states do not have coronavirus tests. The CDC also came under fire after it sent out faulty testing equipment, further delaying the ability to identify infected patients.

The Trump administration has continued to deny that there was any reason to panic despite the CDC's warning.

Gene Sperling, a former top economic adviser in the Obama and Clinton administrations, told the Washington Post that Trump and his advisers lost credibility on the issue by trying to downplay the threat.

"You don't want to overly feed the darkness, but if you seem like all you do is happy talk then you lose credibility," he said. "You get a three-hour high from your happy talk, but lose the long-term ability to be seen as serious, factual and potentially reassuring at a later point when it might be justified. This White House may already be in danger of losing the capacity to be seen as serious."

Republicans have increasingly stepped up criticism of the Trump administration, warning that top officials seem clueless on the threat posed by the virus and expressing concern over the lack of preparation to deal with an outbreak. But the White House pointed the finger at Democrats, accusing them of stoking fears.

"Unfortunately what we are seeing today is a political effort by the Left and some in the media to distract and disturb the American people with fearful rhetoric and palace intrigue," White House spokesman Judd Deere told the Post. "The United States economy is the strongest in the world thanks to the leadership and policies of President Trump. The virus remains low risk domestically because of the containment actions taken by this Administration since the first of the year."

Trump claimed on Twitter that cable news outlets were "doing everything possible to make the Caronavirus [sic] look as bad as possible, including panicking markets."

But investors continue to express concern over what the future holds and don't see Trump as particularly credible on the issue.

"The CDC is probably more credible about the risks from the coronavirus than anything the Trump economic officials say," MUFG Union Bank chief economist Chris Rupkey told the Post.

Congressional leaders also slammed Trump for not being aggressive enough in his response. The administration asked Congress for $2.5 billion to fight the virus, with some of the money coming from funds intended to fight Ebola. Democrats, along with many Republicans, say that's not nearly enough.

Senate Minority Leader Chuck Schumer, D-N.Y., announced on Wednesday that he will seek $8.5 billion to respond to the outbreak.

Trump announced that he would hold a press conference on the coronavirus Wednesday evening. On Tuesday, he dismissed comparisons between his response to the outbreak and Obama's response to the Ebola outbreak.

"There's a very good chance you're not going to die," he said. "It's just the — it's very much the opposite."