Trump had a great time being hosted by Hindu nationalist Narendra Modi: Just another strongman yanking his chain 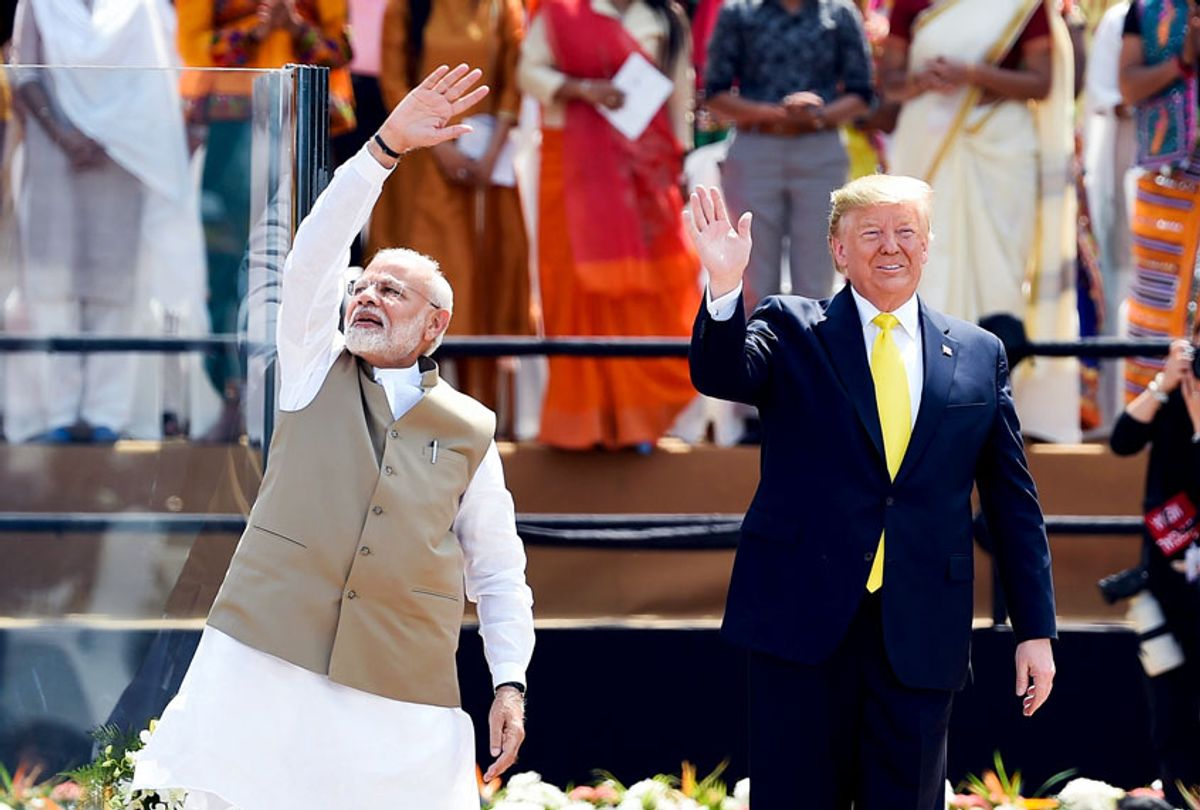 US President Donald Trump (R) and India's Prime Minister Narendra Modi wave at the crowd during 'Namaste Trump' rally at Sardar Patel Stadium in Motera, on the outskirts of Ahmedabad, on February 24, 2020. (MONEY SHARMA/AFP via Getty Images)
--

There has been a lot of discussion over the past few days about Bernie Sanders' comment on "60 Minutes" that the authoritarian Cuban leader Fidel Castro had boosted literacy among his people. Sanders is a self-described democratic socialist so I suppose it's not surprising that this would attract some attention, but his comment really wasn't anything a standard-issue liberal wouldn't have made. In fact, the most revered Democrat in America, Barack Obama, said pretty much exactly the same thing when he moved to normalize relations with Cuba in his final years in office.

Nonetheless, the subject was raised again at the presidential debate on Tuesday night when the moderators asked Sanders whether Americans could trust that a socialist would give authoritarians a free pass.

I don't know whether anyone's noticed this, but Fidel Castro is dead. It's interesting that such a dull observation about literacy programs in communist countries would cause such hand-wringing when you consider that our current president's favorite global leaders are all authoritarian strongmen who are very much alive. In fact, Donald Trump was being fêted and fluffed by one of those at the very moment the press was calling for the smelling salts over Sanders' mundane comments.

Trump was on a state visit to India, which he's been very excited about ever since Hindu nationalist Prime Minister Narendra Modi came to America and filled a stadium in Texas with 50,000 people, promising Trump he would deliver something even better when the president visited India. Last week, even as our entire country was riveted by the prospect of the Department of Justice and the office of the director of national intelligence being corrupted by Trump cronies and character assassins, Trump himself couldn't stop talking and tweeting about his upcoming state visit, telling the press corps on the airport tarmac that while India "treats us very badly," he likes Modi a lot. Why?

Modi did end up putting on quite a show. The Indian government built walls to block visibility of poor neighborhoods along the parade route and filled that new stadium with 100,000 people singing along to the Village People's "Macho Man" as Trump entered the stage. He gave a rambling speech, blessedly avoiding his usual rally insults and digressions, managing throughout to mutilate every Indian word he haltingly tried to pronounce. (Well, he managed to say the words "Taj Mahal" but then he once bankrupted a casino by that name, so it was somewhat familiar. )

The crowd began leaving in large numbers halfway through, but Trump didn't seem disturbed. He had gotten what he wanted, a gigantic public spectacle in his honor.

Like the Saudis and the Chinese, the Indians have Trump's number. Give him a big pageant and you have him eating out of your hand. Show him around and he'll embarrass America. Classless as always, Trump didn't even think to honor Mahatma Gandhi or his message when he visited the legendary Indian independence leader's ashram. But then Gandhi believed in nonviolent resistance which, in Trump's worldview, means he was a loser.

Modi has understood what he was dealing with from the beginning. Recall this:

As they met during the president's first visit to Asia in October 2017, Narendra Modi spelled out his concerns about China's ambitions in the region, which Trump replied to by saying, "It's not like you've got China on your border."

In their book, "A Very Stable Genius," two Washington Post reporters detail how "Modi's eyes bulged out in surprise" at Trump's apparent failure to understand that his country did indeed share a border with China, a line that extends some 2,500 miles.

That anecdote shows that even when Trump has business dealings in foreign countries he knows nothing about them. He literally couldn't find India on a map despite the fact that the Trump Organization has more business there than in any other country outside North America. In fact, his son Donald Jr. caused quite a stir when he traveled to India in 2018 to promote some Trump properties, despite the family's protestations that they had abandoned foreign business ventures while the president is in office. It's easy to see why Trump would be anxious to please the leader of an enormous nation with a fast-growing middle class, and it isn't because he is concerned with the geopolitical implications of a U.S.-Indian partnership.

Trump is likewise unconcerned with human rights violations, either in India or anywhere else. In the past he's excused Russia's authoritarian President Vladimir Putin's killing of journalists, admired Philippine President Rodrigo Duterte's violent crackdown on drug users and, of course, has relentlessly bragged about his bromance with Kim Jong-un, the sociopathic leader of North Korea. We can add to that list Chinese President Xi Jinping, Brazil's thuggish Presidnt Jair Bolsonaro and Turkish President Recep Tayyip Erdoğan, all of whom know that Trump is a fool. Modi is just the latest of those to flatter him and shame America in the process.

It's never been so starkly demonstrated how little Donald Trump cares about anything but himself as it was in India this week. As he was being unctuously massaged and fawned over by the Indian government, there was mass violence in the streets of New Delhi against India's Muslim minority, spurred on by Modi's recent decree that threatens their citizenship.

Trump could not care less.

We all know, including Modi, what Trump's "travel ban" was all about. In his campaign he was very clear. On Dec. 7, 2015, a day which will live in infamy, he went on stage in Mt. Pleasant, South Carolina, and said:

Donald J. Trump is calling for a complete shutdown of Muslims entering the United States until our country's representatives can figure out what the hell is going on. We have no choice, we have no choice.

Of course Trump didn't say anything to Modi about his increasingly violent anti-Muslim Hindu nationalist movement. He doesn't know the first thing about Hinduism, of course. But he agrees with a vicious crackdown on Muslims.

Trump had to water down his "Muslim ban" somewhat in order for the Supreme Court to put some lipstick on it and call it constitutional. But he got 'er done. And he's sent a message to every strongman in the world that the U.S. will reward them for such actions as well. You just have to give President Trump a little sugar and put on a little show.