This pillar of the American safety net originated as a solution to the paradox of hunger in the midst of plenty. 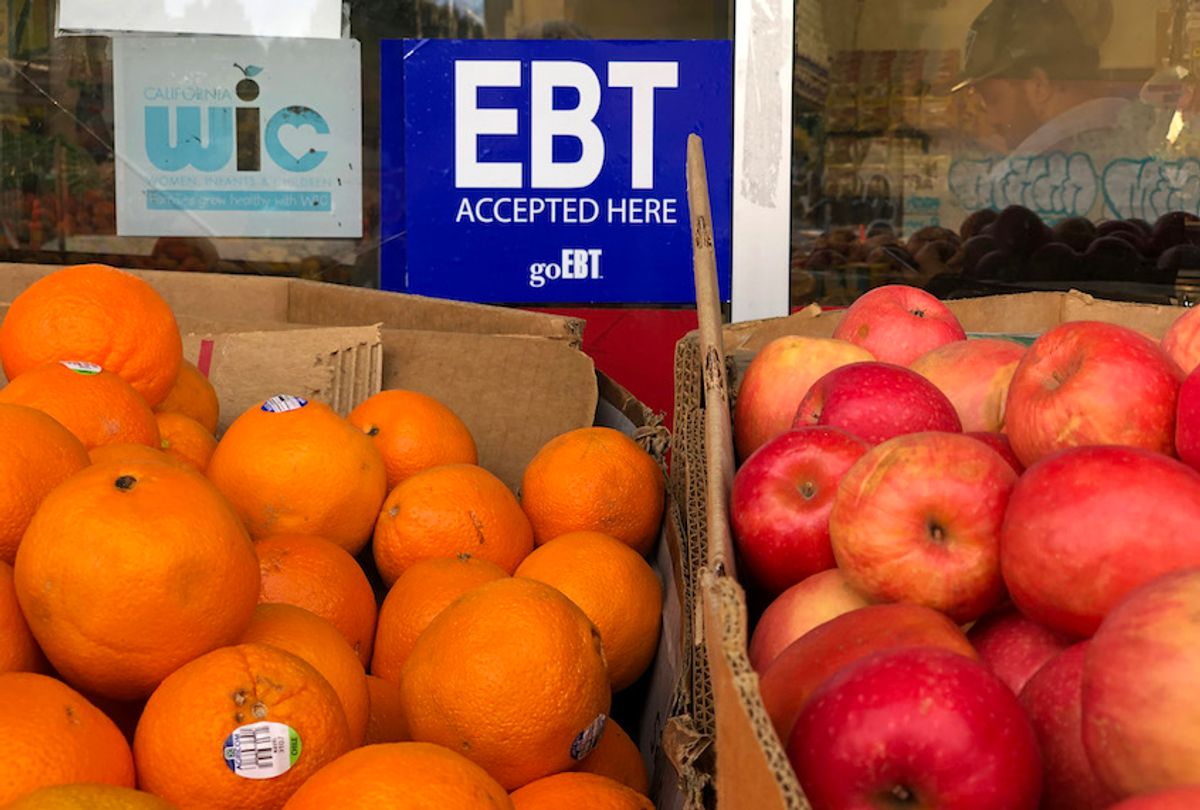 A sign noting the acceptance of electronic benefit transfer (EBT) cards that are used by state welfare departments to issue benefits is displayed at a grocery store on December 04, 2019 in Oakland, California. (Justin Sullivan/Getty Images)
--

Trump administration officials are trying to cut enrollment in the Supplemental Nutrition Assistance Program, known as SNAP but still sometimes called "food stamps." They say that too many people are getting this aid in a strong economy.

In December 2019, Agriculture Secretary Sonny Perdue announced changes that require more SNAP recipients to work or lose their benefits. While speaking with reporters, he alluded to what he called the "original intent of food stamps" — moving "more able-bodied recipients off of SNAP benefits toward self-sufficiency."

The Trump administration is also seeking to take more executive actions that would cut back the eligibility of some elderly, disabled and working poor households. All told, these measures could affect up to 10 million people. And the government is taking additional steps bound to discourage legal immigrants from seeking SNAP and other food assistance.

But while researching the history of food stamps and writing a book about the topic, I have found the government didn't create this program to push people into jobs, as Perdue suggests, but to help those in need get enough to eat.

In the 1950s, improved farming practices helped American farmers grow way more food than they could sell. To keep the price of commodities like wheat and corn from tanking, the government had to buy and hold the surpluses. At one point storage costs alone were over $1 billion a year.

Yet, millions of Americans went hungry. Journalists found children within blocks of the Department of Agriculture rummaging through the garbage for food. Many missed school for lack of energy.

Welfare benefits in many states were too small to allow families to buy enough food. In at least a dozen states, families that included an adult capable of work could not even get cash assistance. But there weren't enough jobs to go around during recessions or in depressed areas. Coal country became a symbol of the problem. Shocks to the industry led to widespread and long-term joblessness. The workers ran out of unemployment benefits and their families struggled to eat.

The government found that local stores also benefited from increased sales, and the effects boosted local economies. Supporters argued a national program would both improve social welfare and provide a new way to cushion the blow from economic downturns. Congress made the program permanent in 1964.

In the late 1960s, an influential CBS documentary, an investigative report from a panel of doctors and congressional investigations shocked the public with heartbreaking images. These reports painted a stark picture of widespread hunger and ailments caused by poor diets in the richest country in the world.

Responding to pressure from the public, President Richard Nixon pledged to end hunger in America, declaring "That hunger and malnutrition should persist in a land such as ours is embarrassing and intolerable."

By 1974, poor people in every county in the nation could get food stamps — the only anti-poverty assistance with uniform national benefit and eligibility standards. Unlike most social programs targeting the elderly, disabled, children and parents, the government intentionally made food stamps available to almost all low-income people. By 1980, the U.S. had made big strides toward eliminating severe malnutrition and reducing hunger.

But many poor people still didn't get food stamps because recipients had to spend a share of their income to buy them. A 1977 law ended that requirement and made it easier to enroll. These changes and a souring economy sent the number of people on food stamps soaring to over 22 million in 1981, from 17.65 million in 1979.

As the number of people getting food stamps grew, so did suspicions that some who didn't need or deserve the help were abusing the program. Critics then and now felt food stamps encouraged dependency and discouraged work.

Presidents Gerald Ford and Ronald Reagan and conservatives in Congress tried to reduce the number of Americans getting food stamps and crack down on fraud. But the program continued to grow amid a weak economy.

A 1996 welfare reform package passed by a Republican-led Congress and reluctantly signed by President Bill Clinton cut benefits, denied food stamps to most legal immigrants and limited adults who were able-bodied, childless and unemployed to three months of food stamps over three years. It also made it easier for states to deny food stamps to some people.

To combat fraud, the law required states to replace paper stamps with electronic benefit cards by 2002. The share of food stamp benefits sold for cash or illegally exchanged at stores plummeted from 3.8 cents on the dollar in 1995 to 1 cent in 2005.

Part of the drop in use of food stamps was due to a booming economy. But the share of those eligible for the program who actually got food stamps also fell steeply from 75% in 1994 to 54% in 2001. Lawmakers and other policymakers grew concerned that families facing hunger were falling through the cracks.

Regulatory changes and a 2002 law signed by President George W. Bush made signing up for food stamps and staying on the program easier. Benefits for most legal immigrants were restored. The law also gave the states more flexibility and incentives to enroll more people.

The 2008 farm bill made more people eligible for help and increased benefits. It also changed the name of the program to the Supplemental Nutrition Assistance Program to ease the stigma associated with it.

The number of people getting these benefits increased in seven out of the eight years of George W. Bush's presidency, even in good economic times. The share of people eligible for the program who enrolled soared from 56.4% in 2003 to 70.6% in 2008 — and continued to rise to 83.8% in 2017.

After the Great Recession hit at the end of 2007, the number of people on food stamps grew steeply from 26.3 million to a peak of 47.6 million in 2013 — roughly 15% of the population. A 2009 economic stimulus bill signed by President Barack Obama temporarily increased benefits and suspended the three-month time limit for unemployed adults without children through 2013. Government economists determined that SNAP spending was more effective than any other federal program in fighting the economic downturn, increasing consumer spending and creating jobs.

Despite the improving economy and the expiration of stimulus provisions, almost 8 million more people remained eligible in 2017 than before the economy hit the skids: 45.2 million versus 37.2 million in 2007. This mostly happened because of changing demographics, low wages and other factors, rather than expanded eligibility.

The Trump adminstration's proposed 2021 budget would cut SNAP spending by nearly 30% over the next 10 years. However, it seems unlikely that Congress would approve that funding level.

I'm concerned that if the White House gets its way, either through the budget process or other means, it would increase food insecurity now and make the program less responsive to the next economic downturn.