The U.K. government has said it will not appeal the court’s decision. 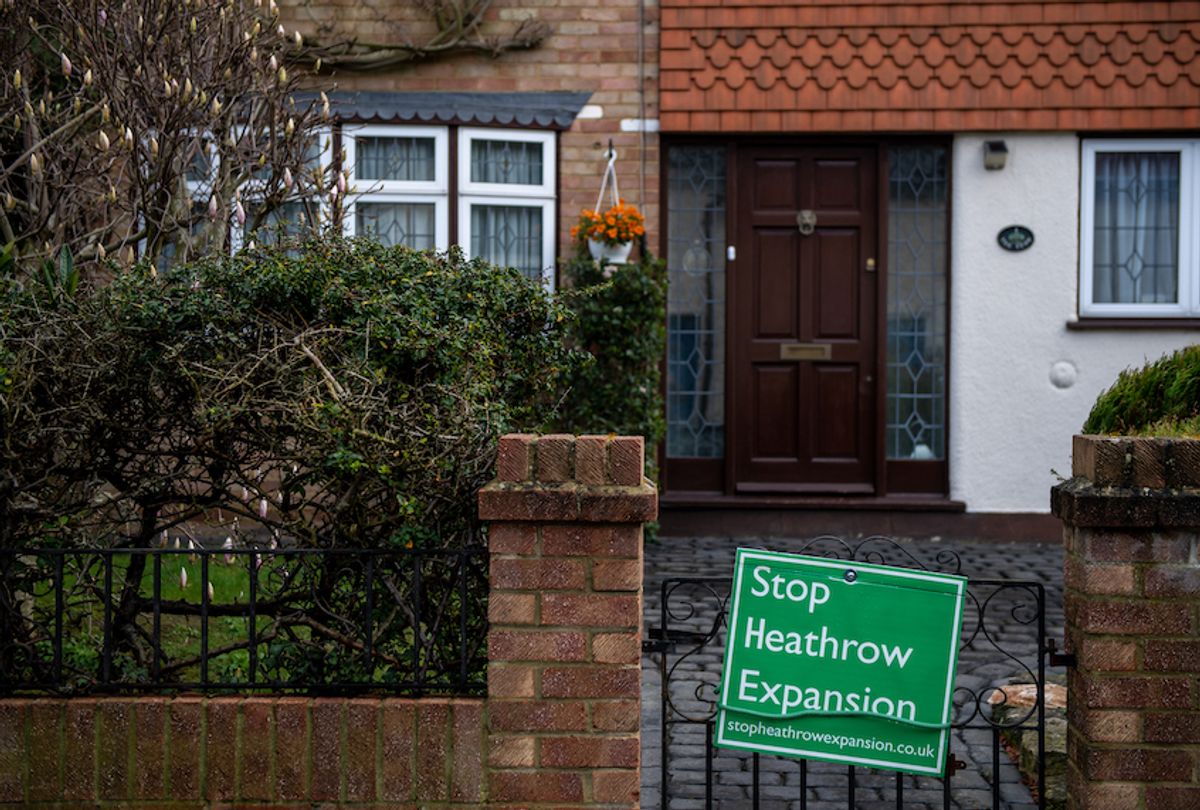 Protest posters in the village of Harmondsworth, which was under threat of demolition because of plans for a third runway at Heathrow airport on February 27, 2020 in London, England. (Chris J Ratcliffe/Getty Images)
--

Terms like "flight shame" might be new to many of us, but environmental activists have been waving their arms about the aviation industry's ginormous carbon footprint for decades. And on Thursday, they triumphed in a fight over an airport expansion at London's Heathrow Airport that's been brewing for years.

In a historic decision, the United Kingdom's Court of Appeal ruled that a controversial plan to build a third runway at Heathrow is illegal because it fails to take into account the country's commitment to cutting carbon emissions under the landmark Paris Agreement. The U.K. government has said it will not appeal the court's decision.

Heathrow is already one of the busiest airports in the world, and the expansion would have brought in about 700 more planes per day, undoubtedly leading to a boom in emissions. Plaintiffs argued this runs counter to the law the U.K. passed last June to align its climate policy with the Paris Agreement. That law requires the U.K. to bring its contribution to global warming down to net-zero by 2050 by vastly reducing its emissions and offsetting any remaining greenhouse gases through other solutions like tree planting and carbon capture technology.

The court's decision is a big deal, and not just for the U.K. This is the first time a court has cited the Paris Agreement to strike down a major infrastructure project — or any project — and could have implications all over the world. As more and more countries, states, and cities enact their own climate policies, courts will inevitably be asked to adjudicate projects that expand the use of fossil fuels, which could be anything from airport expansions to new gas pipelines to highways.

We've gotten a taste of cases like this in the U.S., where we don't even have national emissions targets. Last year a U.S. district court temporarily blocked oil and gas drilling on public land in Wyoming because the Bureau of Land Management didn't assess the emissions footprint of the projects. The decision was based on a requirement in the National Environmental Policy Act, a requirement which the Trump Administration is now trying to toss out. But in places like the European Union that remain members of the Paris Agreement, the Heathrow decision will only make challenges to emissions-increasing projects look stronger.

The ruling was also a major victory for Friends of the Earth and Greenpeace, plaintiffs in the suit that have been fighting the project for more than a decade. In 2007, activists clashed with police after setting up camp near Heathrow for a week of protests against a proposed expansion. In 2008, members of the activist group Plane Stupid climbed to the roof of Parliament and unfurled a banner that read "no 3rd runway at Heathrow."

In 2009, the actress Emma Thompson helped activists buy a piece of land where the runway would have been built to delay its development. Then there was the custard incident, in which activist Leila Deen threw green custard onto then-Business Secretary Peter Mandelson as he was on his way into a "low-carbon summit." Deen called it a "lighthearted way of making a very serious point" about what she called the government's hypocritical policy on climate change, since Mandelson was a supporter of the third runway at Heathrow.

So does the ruling put an end to the protests? In a blog post about the decision, Greenpeace cautioned against celebrating too soon. While the government doesn't plan to appeal, the company that owns the airport does. The government also has the option of pushing the project forward by submitting an amended plan that shows how a third runway could comply with the country's commitment to the Paris Agreement.

But there doesn't look to be much appetite for reviving the fight. When he was mayor of London, now-Prime Minister Boris Johnson railed against the proposed runway, saying he would lie down "in front of those bulldozers and stop the building, stop the construction."

It would also be a bad look given that the U.K. is hosting the next Conference of the Parties, the U.N.'s annual climate change conference, in November.