Buttar's primary against the Speaker of the House seemed like a long shot last time — but is it in the age of AOC? 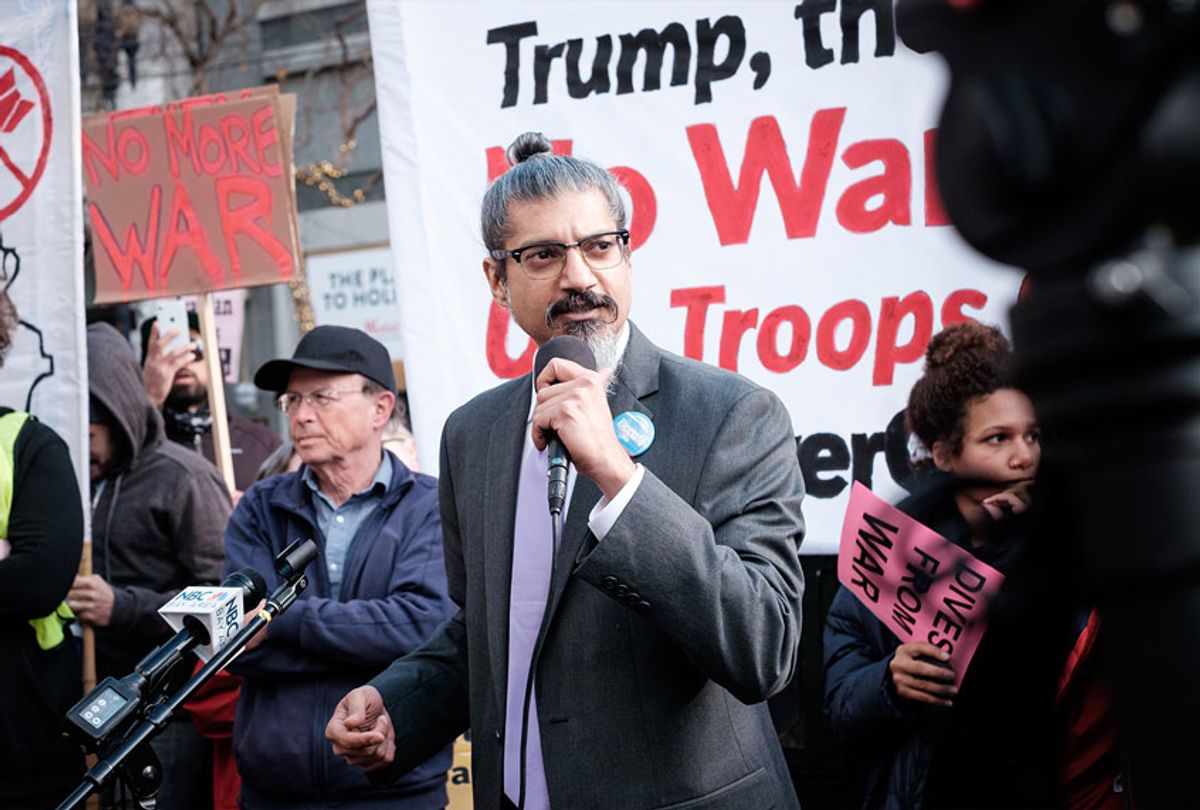 I wasn't surprised when Shahid Buttar suggested meeting at Coffee to the People, an inconspicuous coffee shop in San Francisco's Haight District. Sandwiched in-between a gentrified neighborhood up the hill, Cole Valley, and homeless camps in Golden Gate Park, the shop's populist name and unassuming vibe symbolize what could have been — or what could be — in a city that is torn between its counterculture roots and outrageous tech wealth.

It also embodies the spirit of Buttar's campaign to unseat Rep. Nancy Pelosi, a campaign that is not merely about the Speaker of the House, but also about the centrist agenda she cosigns. This marks Buttar's second bid to represent California's 12th District in the U.S. House, which Pelosi has held since 2013; though this time, the level of interest and energy in Buttar's campaign is different. The Buttar campaign has received donations from 13,000 individuals, and has amassed over 1,500 volunteers in San Francisco. In total, his campaign has raised an estimated $525,000 from 13,000 individual donors. It is a people's movement, driven by progressives and lefties who don't see Pelosi as the brave hero going toe-to-toe with Trump, a narrative often suggested in the media. If he is successful in defeating her in the primary, or at least placing second next to Pelosi, he will have a legitimate shot at winning the general election. One might be drawn to recall 2018, when Alexandria Ocasio-Cortez unseated Democratic Caucus Chair Joe Crowley via first besting him in the 2018 primary.

Much of Buttar's campaign rhetoric involves contrasting himself with Pelosi, which is why I asked him when we met over coffee: "Why should San Franciscans vote for you instead?"

"I really root it in her long-standing service to conservative policies," Buttar said, sitting at a table with two volunteers for his campaign. "A lot of the people who might see her as a hero base that impression on headlines; peering beyond the headlines reveals a different picture."

Buttar pointed to her opposition to universal healthcare, hesitance to the Green New Deal, and support for Trump's trade policy. "Given what I would describe as the legitimacy crisis in a leadership of the Democratic Party that's proven all too willing to put Wall Street before Main Street and to put particularly the Beltway before San Francisco, I think people who look beyond the headlines see the more complete picture," Buttar said. "All of those are dimensions of unfortunate opposition between Pelosi as the institutional leader of the Democratic Party and the rank and file progressives that fuel it."

But what about Pelosi leading the Trump impeachment?

"The impeachment process that Nancy Pelosi brought, in addition to being a year late, affirmatively excluded his [Trump's] corruption from the process," Buttar said. "It focused entirely on a political crime inviting foreign interference in a U.S. election, and that is a crime."

In a sense, Buttar's political story begins before he was born. Buttar's parents, who belong to a sect of Islam called Ahmadiyya, migrated from Pakistan to Great Britain to escape religious persecution. Buttar was born in London. When he was 2, the family left Britain to move to Rosebud, Missouri, where they lived until he was 10 years old. From there they moved to the South Side of Chicago, and then the North Side. But when he was a freshman at the University of Chicago, he experienced housing instability when his family's home was foreclosed upon, which put him on a different path.

"At the University of Chicago, I had $600 in my pocket that I'd earned, saved up that summer; I maxed out on all the aid that was available to me, and my parents didn't have a dime," Buttar recalled. By working and taking night classes to finish his undergraduate degree at Loyola, Buttar got back on his feet. A few years later, he was mugged by Chicago police officers.

"Between having experienced the economic marginalization forces people endure, and then having a very direct experience of sort of Kafkaesque authoritarianism, both of those experiences inflected my perspective," Buttar, who is now 45, said. "Then working for Chicago financial institutions and witnessing the precursors to the 2008 financial crisis, that radicalized me;  I went to law school to bust big corporations, then the set of events while I was in school, particularly the 9/11 attacks and the Patriot Act brought that set of issues really, I wouldn't say drew my attention away from the economic crisis, but it expanded my concerns around economic inequality to particularly focus on the constitutional crisis that's only grown deeper in the years since."

Buttar moved to California to attend law school at Stanford University. After graduation, he took jobs that presaged his work today: He defended Jason West, mayor of New Paltz, New York, after West began conducting same-sex marriage in his jurisdiction; he went on to work as staff counsel for advocacy group Muslim Advocates; later, he became advocacy director for the digital civil rights group Electronic Frontier Foundation. Buttar's bread and butter, however, are the political issues that have most affected his life — namely, housing. When asked about the Bay Area's housing crisis, and what can be done about it from a federal level, he offered a multi-pronged solution.

"The easiest thing that we can do at the federal level is to take the local initiative that we've already passed — this is Prop F, the right to civil representation for people facing eviction — and make that federal," Buttar said. "It will require a resource grant to basically incentivize states to provide that opportunity to residents, but that's something Congress can do."

He added: "The only places in the country at the moment that have a right to civil representation for people facing eviction are San Francisco and New York; that should be a national right."

"The last thing that we could do is to reinvest in social public housing," Buttar said. "This would be housing owned not by nonprofit property developers, as in the case of the Community Development Block Grant, but rather housing owned by we the people; that's going to require a process innovation, particularly in terms of building a structure to hold federal properties accountable to local communities."

Given his personal experiences with crooked cops, Buttar is passionate about reforming policing and the criminal justice system. His 30-point criminal justice reform platform includes "creating a national registry of killer cops," he said.

Indeed, it is his campaign's focus on human rights before corporate and military interests that appeal to his voters, many of whom see Pelosi as cosigning the latter. Chris Do, who has been volunteering for Buttar's campaign, told me this is especially an important issue to him as a Vietnamese immigrant whose parents were refugees from the Vietnam War.

"I feel like Shahid especially talks a lot about ending the military industrial complex, and I often feel like that's something that's often missed in many media sources, the bipartisan agreement to go to war and spend billions and billions of dollars on war instead of reinvesting it on domestic policies such as the Green New Deal, or housing, or Medicare for All — when we have money to do it but we lack the political will to do so," Do said.

Grace McKenzie, another volunteer on his campaign, agreed.

"I find it super-ironic that when of the earliest things you learn in school is this concept of sharing, cooperating, and treating other people as you want to be treated yourself. It seems the older you get, the further you get away from that lesson learned," McKenzie said. "It doesn't even make economic sense, because in the Medicare for All paradigm, we're just talking about economic principles like economies of scale — where if you pool your resources, things become cheaper because demand goes up."

Buttar isn't the only progressive challenging Pelosi in the California Primary on March 3. Agatha Bacelar is also a challenger, but Buttar's campaign has drawn from the pool of Bernie Sanders supporters, among whom Buttar counts himself a member. (Buttar already refers to as "President Sanders.") His organizing prowess has given him celebrity clout in San Francisco. In the middle of our interview, a young man came up to Buttar to express his heartfelt support. "I really think one of these days it'll happen, and no one will see it coming, where it's like, 'Oh, yeah, this dinosaur lost by a huge margin,'" the stranger said before ambling off.

"I already represent the city," he said. "Just not formally."