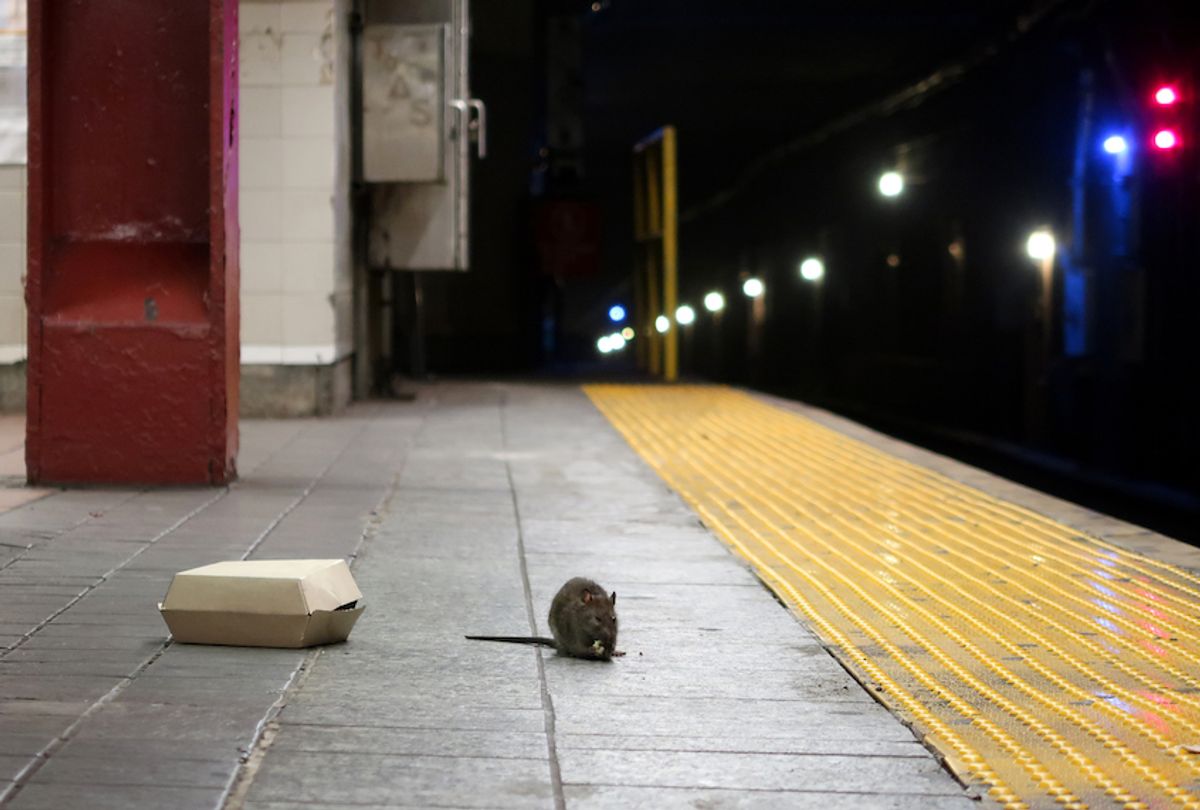 A rat eats on the platform at the Herald Square subway station in New York City on July 4 2017. (Photo by Gary Hershorn/Getty Images)
--

For centuries, rats have thrived in cities because of human behavior. In response, humans have blamed the rats and developed techniques for poisoning them.

We research urban rat populations and recognize that rats spread disease. But they are fascinating creatures that think, feel and show a high level of intelligence. Public concerns about rat poison harming wildlife are growing – a trend that we believe could eventually lead to rodenticide bans in many parts of the world. Without poison as an option, humans will need other rat control methods.

Rats' many negative traits are well known. They are among the most detrimental invasive animals in cities. Urban rats are like disease sponges, congregating in the foulest reaches, where they pick up harmful pathogens. They carry the antibiotic-resistent MRSA (methicillin-resistant Staphylococcus pseudintermedius). Inside the rat gut, MRSA can interact with other diseases like ingredients in a mixing bowl, creating newer bugs that can be transported from septic systems into homes.

But common approaches to managing rats often fail to address the most important factor contributing to infestations: humans and the prolific quantities of food that they waste. The more research we do on rats in New York City and worldwide, the more we realize that rat behaviors contribute less to infestations than do humans.

Piles of trash near large homeless camps in Los Angeles encourage rats and the diseases they carry.

On Jan. 4, 2020, Malibu, California banned rodenticides due to their harmful effects on nontarget wildlife, such as mountain lions. This came after the California Assembly passed a bill to ban rodenticides statewide; the measure died in the State Senate, but could reappear this year.

If curbs on use of rat poison start to spread, communities will need other ways to manage infestations. Rats cost the world's economy billions of dollars yearly, mostly from contaminating food in warehouses, restaurants and home kitchens. The costs of illnesses vectored by rats are unknown because medical providers treat many sicknesses without knowing what caused them. As human populations become increasingly clustered in cities, these effects could increase.

Meanwhile, climate change is shortening winter seasons that limit rat reproduction. Globalization, climate change and inability to use rodenticides could result in a "perfect storm" of vulnerability to rodents on a scale humans have not experienced since the Middle Ages.

Research shows that to address this problem effectively, people must start by understanding the ecology of wild rodents. Rats adapt to human food sources and reproduce at remarkable rates. If enough food is present, a single Norway rat (Rattus norvegicus) can give birth to up to 12 pups in a litter. And each well-fed pup could give birth to 12 pups of its own in as few as six weeks.

We believe the key to controlling rats is appreciating a key point: Because rats have short life spans of one to two years and reproduce often, they adapt quickly to changing environments. In our view, until people change their behavior, they may fail at controlling rat numbers.

Current mechanisms for rat control are more reactive than proactive. Urban hygiene has become big business for exterminators, but does little to control rat populations.

A typical approach is to take action once rodent populations are high enough that their presence cannot be ignored. But rats are mostly nocturnal, small and elusive, so they typically are noticed only after their numbers are already high.

This reactive approach makes any control measures – excluding rats from buildings and feeding sites, setting poison baits, introducing predators, asphyxiating them with dry ice (frozen carbon dioxide) or treating them with immuno-contraceptives – comparable to putting a bandage on a cancer.

In our lab, we study the scents that rats prefer. As nocturnal animals, rats have poor vision and rely on olfaction to identify potential mates, habitats and food sources. 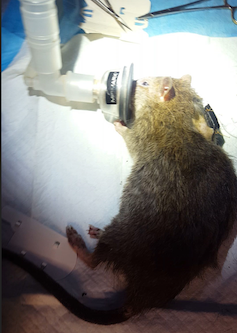 Molly, a rat in the authors' study, wearing a GPS tag. Determining what scents rats are attracted to could aid the development of rat control tools. Michael Parsons, Author provided

Many city dwellers eat when they are busy, stuck in traffic or otherwise on the run. They drop wastes, such as grease-soaked napkins and hot dog buns, onto streets, playgrounds and subway tracks. Even highly conscientious people may hastily toss uneaten food and wrappers onto the top of an overflowing rubbish bin when they are stressed for time.

People who are working and caring for families do not take time to think about what unseen rats are doing. But our research convinces us that society can learn to stop feeding rats inadvertently. Pest management professionals, academics, policymakers and citizens can all help advance this goal, because people can radically change the ways in which they handle and dispose of food.

We believe that giving people incentives to create sanitary environments is an effective and socially progressive strategy. Here is one example: Because so much of the rat problem in New York City is driven by curbside garbage sitting outdoors overnight, we suggest hiring unemployed or homeless individuals as evening sentinels. They would move garbage bags from the curbside into guarded common areas and then return them to the curb for early morning collections.

Some cities could establish citizen rat patrols that would train residents to identify and notify property owners when they detect that rats are present. The typical indicators are barely noticeable openings appearing around buildings, or dark grease stains on sidewalks, parks or undeveloped lots. This approach eliminates the social stigma often associated with rats by showing people how to take proactive steps before an infestation develops.

Rats cause very expensive problems, but they also are surprisingly engaging animals that exhibit human-like qualities, such as remorse and empathy. Scientists have trained them to drive tiny cars. As evidence that rats are thinking, feeling beings accumulates, we expect that it could make many communities more reluctant to poison them.

In our view, since rats are deeply rooted in human society, people need to understand how their own actions encourage rat behavior. We want to encourage brainstorming about this issue and help identify the most promising ways to manage urban rat problems effectively and humanely.