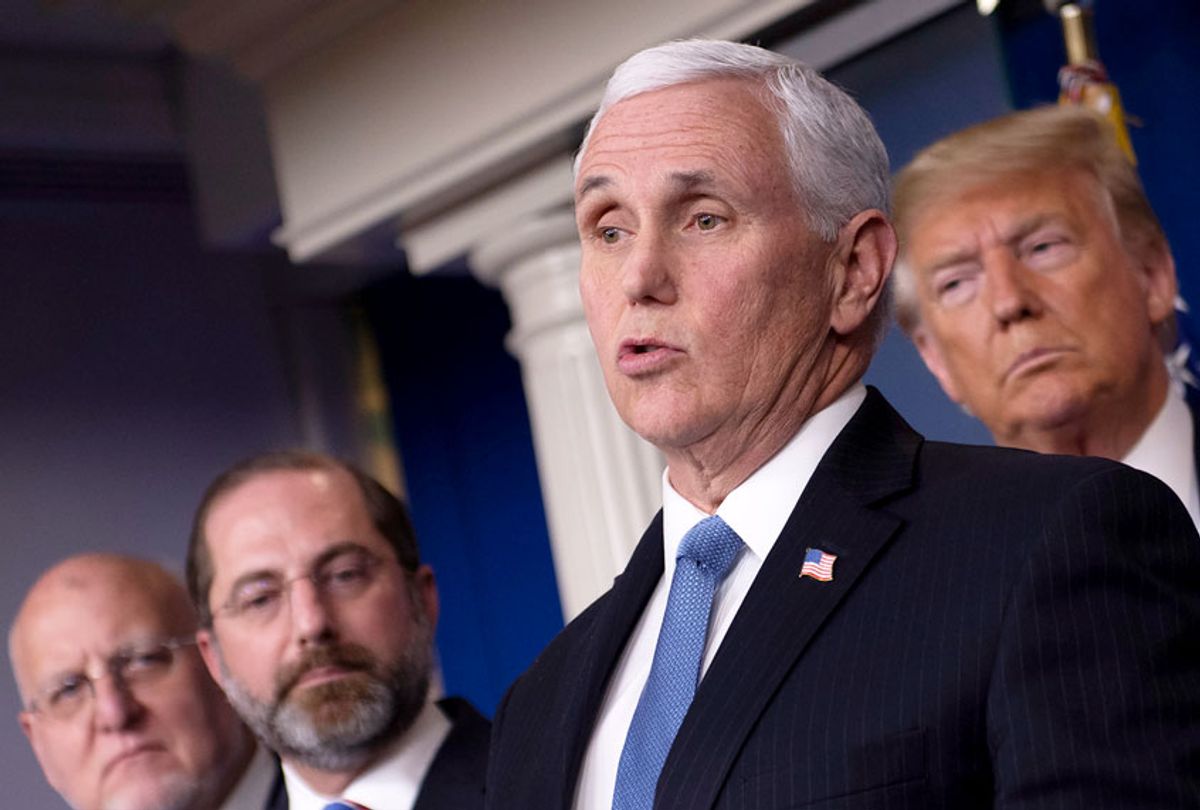 Last Wednesday as the stock market dropped precipitously for the third day in a row, President Trump was reluctantly forced to admit that the nation was in the midst of a major global public health crisis. So he held a desultory press conference, handed out some misinformation and blamed Democrats for the stock market slide. And then he named Vice President Mike Pence to be the point man for the crisis, reportedly because he thinks Pence "doesn't have anything else to do." It was hardly reassuring. In fact, Pence might be the very last person one would want to put in charge. His history with public health is abysmal.

When a rural county in Indiana had an HIV outbreak during Pence's tenure as governor, he completely dropped the ball. And he's lying about it. He told Fox News host Sean Hannity last week, "I don't believe in needle exchanges as a way to combat drug abuse, but in this case, we came to the conclusion that we had a public health emergency, and so I took executive action to make a limited needle exchange available."

That is a terrible spin. FactCheck.org reports:

An unusually high number of HIV cases in Scott County, Indiana, was first spotted by health authorities in November 2014. Pence did not declare a public health emergency and authorize a needle exchange program for the county until March 26, 2015.

A 2018 study by Yale University researchers, published in the medical journal The Lancet HIV, concluded prompt action could have dramatically reduced the seriousness of the outbreak."... It was a total collapse of public health leadership and a dereliction of duty in Indiana," one of the study's authors, Yale epidemiologist Gregg Gonsalves, told the Washington Post. "They could have avoided this epidemic if science took the lead instead of ideology."

Pence is not a believer in science so it's unlikely that epidemiology is something he believes is particularly valuable. He wrote an op-ed back in 2000 asserting that "smoking doesn't kill." A couple of years later, he told CNN that condoms were "very poor" protection against sexually transmitted disease, and that "the only true safe sex is no sex." He has said that global warming is a myth and he doesn't believe in evolution. It's hard to imagine a worse person the president could have chosen to run the response to a pandemic.

Whatever Pence is doing as the "Coronavirus Czar" he certainly doesn't seem to be keeping the boss informed. On Friday, Trump headed out to troll the Democratic presidential candidates in South Carolina, holding a big rally there on the night before the primary even though the Republicans had canceled theirs. He stopped to talk to reporters briefly and once again misinformed the public about the crisis, saying there were only 15 cases in the U.S. and all those people except one were getting better and in great shape. He took credit for closing the borders "early,"saying, "Otherwise it could be a different story."

Later that night, Trump told his screaming rally-goers that the Democrats were perpetrating another hoax, leaving it unclear whether he meant they were making up the epidemic or falsely accusing him of mishandling the crisis. Either way, it was outrageously irresponsible for the president of the United States to use the word "hoax" in that context.

No doubt he had been listening to various Fox News hosts, all of whom were busy convincing their audience that the media and the Democrats were out to destroy the president. Medal of Freedom winner Rush Limbaugh said the virus had been "weaponized as yet another element to bring down Donald Trump" and tried to discredit Dr. Nancy Messonnier, who leads the CDC's National Center for Immunization and Respiratory Diseases, because she is Rod Rosenstein's sister. Donald Trump Jr., as usual, took it to the next level:

Many Trump supporters on social media have apparently concluded that the virus itself is some kind of liberal hoax perpetrated to hurt Trump:

By Saturday, between Trump's hoax comment and reports that Pence had issued orders that no public health officials were allowed to speak publicly without clearing it through him, the situation was hurtling out of control and the White House scheduled another press conference. Trump struck a slightly more sober tone but it became clear that for doctors and other scientific experts to do their jobs, they would have to genuflect to the president's greatness prior to being allowed to deliver information to the public.

Dr. Anthony Fauci, the director of the National Institute of Allergy and Infectious Diseases, denied that he'd been muzzled. But in fact, Fauci had been scheduled to appear on the five Sunday morning shows and canceled them all. Mike Pence showed up instead. It wasn't pretty.

The vice president of the United States was not able to say that Democrats aren't rooting for millions of people to die so they can stop President Trump from all his winning. He too is muzzled. They all are.

More importantly, Pence is spreading more misinformation. When queried by Fox News host Maria Bartiromo as to why the U.S. has been so slow to administer tests, compared with other countries, he had a slick misdirection at the ready:

Concerning domestic testing, Pence revealed that "we believe we are in the process of resolving the issues about testing kits" that have been sent to states.

"Yesterday, we have now approved a new arrangement so that states can conduct these tests on their own," Pence said. "As we speak, literally more than 15,000 kits are going out to the relevant areas, and we'll soon be sending another 50,000 that are going to be made commercially available out to states."

When Bartiromo pushed back, saying only 500 people had been tested in the U.S. and that other countries allow drive-through testing or testing at home, Pence noted that "we've actually screened 47,000 people coming through designated airports in the country."

It sounds as if he's initiating yet another Trump administration cover-up. Airport screening is not testing. It's not even close, particularly now that we know the virus can be spread by people who have no symptoms.

The fact is that the U.S. bungled the testing protocol. It has cost valuable time, and will probably cost lives:

The World Health Organization (WHO) has shipped testing kits to 57 countries. China had five commercial tests on the market 1 month ago and can now do up to 1.6 million tests a week; South Korea has tested 65,000 people so far.

Authorities are sorting this stuff out now, but the idea that the U.S. response has been "the best in the world," as Trump has claimed, is obviously nonsense. His designated point man is spinning like a top, insisting that everything is going swimmingly.