Legal abortion is gone for many women, but the problem is about to get exponentially worse

Author Carole Joffe spoke with Salon about how we're already in a post-Roe v. Wade world, despite a March 4 case 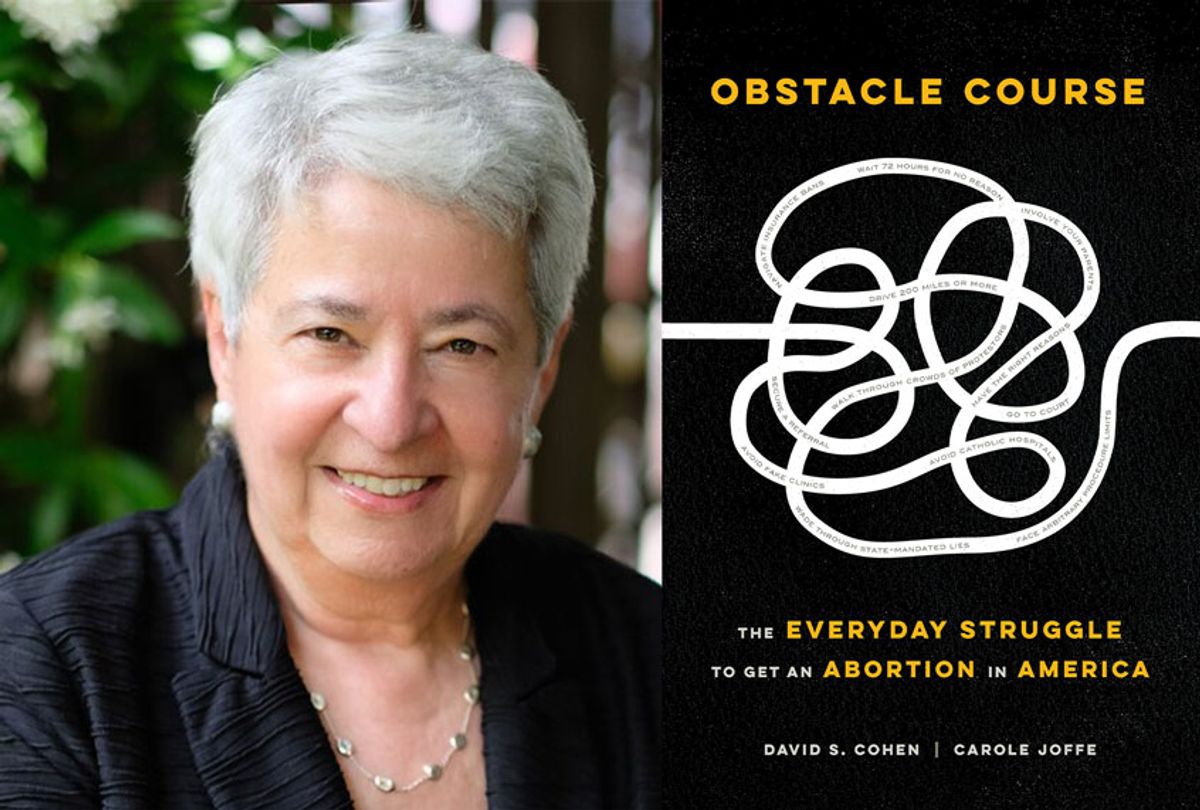 "Obstacle Course: The Everyday Struggle To Get An Abortion In America" by Carole Joffe and David S. Cohen (Provided by publicist)
--

With everything going on in the news these days, most Americans have no idea that the religious right is, after over four decades of trying, quietly on the verge of ending Roe v. Wade as we know it. The case is being heard March 4, and is called June Medical Services vs. Russo. Even though the Supreme Court ruled, a mere four years ago, that the state of Texas couldn't use medically unnecessary regulations on abortion clinics as a backdoor way of banning abortion, Louisiana thought they'd take another go at it.

What changed? Not the medical science or rationale for these backdoor bans. No, it was the makeup of the court. With Donald Trump appointee Brett Kavanaugh on the bench instead of Justice Anthony Kennedy, anti-choice activists believe they have just enough votes to end Roe in all but name — precedent be damned.

But, as reproductive health researchers Carole Joffe and David Cohen argue in their new book, "Obstacle Course: The Everyday Struggle To Get An Abortion in America," for many women in America, it's already a post-Roe world. Years of state Republican legislators passing restrictions on abortion in a piecemeal fashion has created a situation where the procedure may be legal, but out of reach for millions of women. The court's expected ruling this year will simply make this already terrible problem much worse.

Joffe spoke with Salon about what life looks like when legal abortion access is denied to so many.

On March 4th the Supreme court will be hearing a case called June Medical Services vs Russo. It's about Louisiana state regulations that threatened to shut down abortion clinics in that state. So what's this case about and how worried should we be about it affecting access to abortion in the U S?

Well, I think we should be very worried on two counts. One, the case ignores Supreme Court precedent, in the 2016 case Whole Women's Health vs. Hellerstedt. The court decided, that if you're going to impose restrictions, there had to be evidence and the benefits to women had to outweigh the cost.

Put more colloquially, the courts said to state legislators, you can't make s**t up. Scientific experts, both medical and social science, showed that these restrictions would impose hardships, and that there was no medical benefit.

So, reasonably enough, people in the pro-choice movement thought this was settled. And now just a few years later, here comes the state of Louisiana totally ignoring it.

There's another, less noticed, aspect of this case that in some ways is even more troubling. And that is the issue of whether or not abortion providers have standing to bring cases on behalf of their patients.

The overwhelming amount of abortion litigation are brought by providers. Pregnant women have very little incentive to go before a court. Court cases take a long time. By then they will lose their window to have for the case to be resolved in their favor. A lot of pregnant people simply don't want to come forward and be in the headlines and subject themselves to all kinds of trolling and attacks. So if the idea that abortion providers can no longer bring suit on behalf of their patients is very, very troubling.

The state of Louisiana is claiming that all providers really care about "is providing as many abortions as possible" and being "free from government oversight." And that's absolutely not true.

Abortion providers don't care about doing as many abortions as possible. Over the years studying this field, I found numerous examples of when patients are ambivalent, the providers will encourage women to take their time, to go home, think about it.

One provider we quote in the book told us she has nightmares on doing an abortion on someone who didn't want it.

It's such a weird stereotype. I recently visited an abortion clinic in Philadelphia and was talking to the workers and all they were talking to me about was how, after they do abortions, they really try to get the women to have a conversation with them about contraception. Which strikes me as not the conversation you'd be having, if you were trying to do more abortions, right?

It's the standard of care, that you should initiate conversations about contraception if the patient is open to that.

Currently abortion is harder to get than it ever has been since it was illegal. Why is it so hard to get, despite Whole Women's Health?

The number of abortions before Roe, I mean no one knew exactly how many, but there were reasonable estimates, and some people put it as high as a million, which is more than we have today. A lot of that is better contraceptive methods available. But some of the decline in abortions has to do with self-managed abortions. People are ordering drugs used in medication abortion off the internet. No one's officially counting them.

The reason it's so hard to get an abortion is a decline in the number of abortion facilities. We have six states with only one clinic. If Louisiana wins its case, there will be only one facility left in Louisiana.

The key point is that so many abortion patients now are poor. The Guttmacher estimates are that 50% of abortion patients live below the poverty line. Another 25% are classified as working poor. So for these people not having enough money to pay for abortion is only the beginning. Thirty-three states now do not use Medicaid dollars for abortion.

Here you're talking about very poor women, who very likely don't have cars, have to depend on somebody else to drive them. Many of these women are in rural states where there's not good public transportation. Add to that the factor of a waiting period some states impose.

Sixty percent of abortion patients are parents. You're poor. You have children. You need to go away from your home. You need to figure out someone who will drive you. And we heard heartbreaking stories of people who have boyfriends or family members will say, yeah, I'll drive you and then literally don't show up.

If you're working, you're losing wages. You have to pay for childcare. Plus, you get to the city where your abortion will take place and they tell you, we'll counsel you today, but you can't have the procedure till tomorrow or the day after. Or, if you're in the state of Utah three days from now.

All these things cost money. That's part of the reason it's so hard to get an abortion.

This gives you a sense of just the obstacle course that women have to go through. It's unconscionable. I mean, no other part of the healthcare system is like this.

We're looking at June Medical Service as this turning point where the Supreme Court might functionally ban or reverse Roe vs. Wade. If they won't ban abortion outright, they will allow states to use red tape to get rid of legal abortion services within their borders. But it sounds like functionally for a lot of women, abortion is all basically banned already.

You mentioned women using pills online. They're obviously not getting those directly from doctors, right? They're buying them from India or Mexico or someplace like that. Does this concern you?

Now what do I think of self-managed abortion from getting the medications online through the mail? The good news here is that this is actually quite safe.

People have actually tested the quality of the drugs that are available online. Many people in the pro-choice movement were afraid that people, desperate women, would send in money and then just get sugar pills or aspirin. It turns out that the stuff that's being sent, by and large, is of good quality. So that's very reassuring. If you compare self-managed abortion now using these pills with what happened before Roe, it's night and day.

Your readers presumably have all heard the tales of the "back-alley butchers." I mean they weren't the only people doing illegal abortions, but that was a big part of it. Many women died, many more women were injured.

The relatively speaking good news is that people using these pills will not have the same level of injury. The bad news potentially is that I believe there'll be much more legal surveillance of  this practice. In 1962, when you attempted to do your own abortion, that was very dangerous medically. But there were very few prosecutions.

We don't know how much legal prosecution there would be if you go to an ER and you're bleeding too much. Will the doctor be forced to report you?  If he or she advises you, will they be seen as accomplices in abortion, in those states that have banned it? We face a very uncertain legal environment, both for women and for providers.