The CDC has detailed case files on coronavirus patients. Why has it withheld that information for weeks? 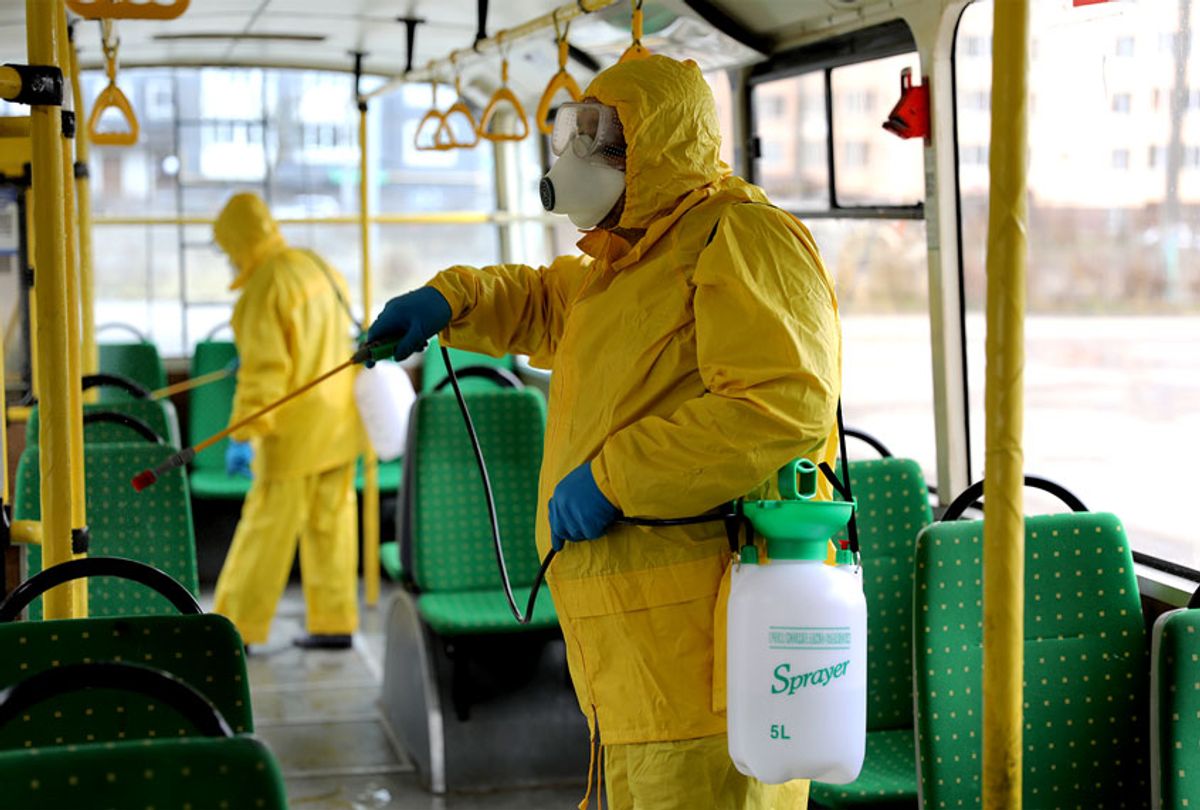 Employees wearing protective gear spray disinfectant to sanitize a passenger bus as a preventive measure against the coronavirus in Lviv, Ukraine, Tuesday, March 3, 2020. Ukrainian Chief sanitary and epidemiological doctor Viktor Liashko has just reported its first confirmed case of the new COVID-19 coronavirus, saying a man who recently arrived from Italy was diagnosed with the virus. (AP Photo/Mykola Tys)
--

The Centers for Disease Control and Prevention has withheld "crucial" information about the coronavirus from doctors, medical experts warn.

"It's a medical truism that it's absolutely essential that physicians with experience with a particular condition disseminate information to others," Dr. Irwin Redlener, the director of the National Center for Disaster Preparedness at Columbia University, told the network. Not sharing this information is "inexplicable and inappropriate," he added.

Dr. Anthony Fauci, the director of the National Institute of Allergies and Infectious Diseases, has said reports on the cases are forthcoming. Health officials in three states and multiple hospitals said they shared patient information with the CDC, but the agency has not released it. Doctors told CNN they could not understand why.

"If you're a doctor dealing with this in the emergency department, you want to know what we've already seen in the United States," Dr. Paul Offit, an infectious disease expert at Children's Hospital of Philadelphia, told the network. "You want to know what symptoms were common? Are there any markers that give a sense when a mild case is likely to progress to a severe case? What do you need to worry about?"

The lone detailed report on a U.S. coronavirus case was published in the New England Journal of Medicine on Jan. 31, describing the condition and treatment of a 35-year-old Washington state man who recovered from the virus at a hospital. Most of the other medical information is related to cases in China, where the outbreak began.

The CDC has already been criticized for sending faulty tests to state labs, a move which delayed the ability to identify new cases. The agency required states to send their tests to a lab in Atlanta, but a top federal scientist warned that the test kits may be contaminated, Axios reported.

The CDC courted further controversy Monday after its website stopped displaying the number of Americans who have been tested for the coronavirus.

"Americans are dying. We deserve to know how many people have been tested," Rep. Mark Pocan, D-Wis., said in a letter to CDC Director Robert Redfield. "Knowing that CDC testing is keeping pace with the likely number of cases is imperative to maintaining public trust."

The CDC also abruptly postponed a press briefing on the coronavirus response without explanation Monday.

The moves came after researchers found the coronavirus likely spread undetected in Washington state for weeks amid concerns that the CDC was not allowing certain patients with symptoms to get tested. Researchers estimate there are hundreds more cases in the U.S. that have not been identified. The CDC also released a patient from isolation who later tested positive for the coronavirus.

The news, which came after reports that coronavirus response chief Vice President Mike Pence required all health officials to clear their public statements with his office, drew questions of whether the CDC was intentionally withholding information.

"Is this administration muzzling the CDC because they care more about optics than patients?" Daily Beast editor Molly Jong-Fast asked.

"There's no useful information coming out of our government on the coronavirus because the government has no information to share. The government has no information to share because it isn't testing people. It isn't testing people because they haven't distributed tests. They haven't distributed tests because they bungled them," he tweeted. "They bungled the tests because there's no competent management. There's no competent management because Trump chose appointees based on loyalty. He used this criterion because he's corrupt. Also because he's incompetent."