In "The Power Worshippers," Katherine Stewart shows what really motivates the Christian right — and it's not Jesus 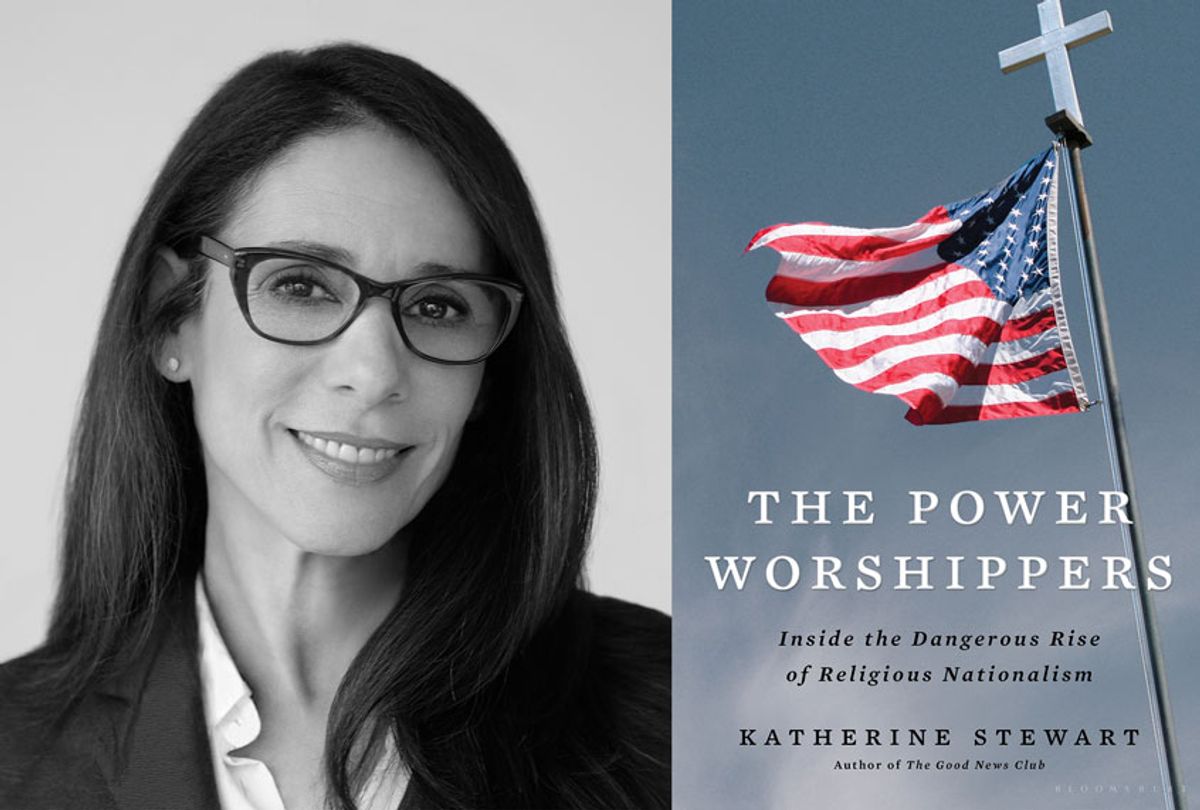 "The Power Of Worshippers: Inside The Dangerous Rise Of Religious Nationalism" by Katherine Stewart (Provided by publicist)
--

It's one of the most enduring conundrums of the Donald Trump era: How is it that the Christian right, the self-appointed monitors of American morality, have come to so enthusiastically back a thrice-married chronic adulterer who lies as easily as he breathes?

Author Katherine Stewart has the answer: Because the true god these folks worship is power. In her book, "The Power Worshippers: Inside the Dangerous Rise of Religious Nationalism," Stewart details how she traveled around the country, getting to know the various Christian conservative figures that are whipping support for Trump and his agenda. She deems the "Christian nationalists" and demonstrates how their supposedly Christian values always come second to their endless quest for power.

Stewart spoke with Salon about her new book. This interview has been edited for clarity and length.

In the intro of the book you write that most Americans view the Christian right as a  "cultural movement centered on a set of social issues, such as abortion and same-sex marriage." But in fact, it's a political movement and its ultimate goal is power. What do you mean by that?

I think when we think of the religious right, we're often thinking of a cultural movement or social movement that works from the bottom up, expressing the anxieties and reactions of a particular group in American society to change social realities, focused on issues like reproductive rights or same-sex marriage. But Christian nationalism really works from the top down. It actively shapes and manipulates its target population, and it often shifts its target.

When movement leaders are talking to the congregants or to pastors who speak to congregants, it's all abortion all the time. The foot soldiers may even believe that they're fighting for things like a ban on abortion or same-sex marriage, but the leaders have actually consciously reframed these issues in such a way that they can control the vote of a large subsection of the American public. They use that to solidify and maintain political power for themselves and their allies, to increase the flow of public and private money in their direction, and to enact economic policies that are favorable to their funders.

Tell me more about that. How does someone argue that there's something Christian about, say, low tax and low regulation?

Someone like Ralph Drollinger — who targets political leaders at the top levels of government — he's got this Bible study group in the Capitol that's been attended by at least 11 members of Trump's cabinet, including Mike Pence. He also has Bible study groups targeting the Senate and House of Representatives, and they're very well-attended. So he's arguably one of the most politically influential pastors in America.

He argues that social welfare programs have no basis in Scripture. He says that the government should not directly fund needs for the poor. He says the responsibility to meet the needs of the poor lies first with a husband and a marriage, second with a family if the husband is absent, and third with the church. He says nowhere does God command the institutions of government or commerce to fully support those with genuine needs.

These policies are incredibly favorable to the plutocratic fortunes that are funding the movement. The movement wouldn't be what it is without some subsection of very wealthy individuals and extended families that are supporting the movement financially. I'm thinking of like the DeVos, Prince families, the Green family, and so many others that I described in my book.

These families, in turn, benefit from a deregulation of lack of environmental control regulation, low taxation, and minimal workers' rights. Drollinger himself derived a lot of his early funding from agribusiness kings, people who own large agribusiness conglomerates in Central Valley, California, and the San Joaquin Valley. So it's a kind of economic policy that actually is favorable to many of the big-picture funders of the movement.

We also have to recognize that the role of public money is absolutely huge. A lot of the calls for "religious freedom" that characterize much of the activism of the movement today are often seen, rightly so, as a demand that conservative Christians should be able to discriminate against LGBT Americans, nonreligious women and members of the religious minority groups.  But even more than that, activists have their eye on a vast potential flow of public funds in the future. This is one of the reasons why the calls for religious freedom are just like this ever-louder drum beat that we're hearing in so many places.

This agenda has been made really explicit in the field of public education where activists are determined to expand access to public funds in the form of vouchers. They've actually placed a key voucher case before the Supreme Court, which they hope will allow a greater funnel of funds in their direction.

The United States spends something like $700 billion a year on K-12. So Christian nationalists realize that, if they can get their hands on a small portion of that in the name of religious liberty, the money will flow without end. So when you look at the larger demands of the movement, it's not just about these culture war issues, it's about public policy, foreign policy, and it's about money.

Christian nationalism is a political ideology. It says that what makes the United States distinctive is not our democratic system of government, or our Constitution, or our history of assimilating diverse people in a pluralist society. Instead, it insists that the foundation of legitimate government is bound up inextricably with the reactionary understanding of a particular religion. It basically says that the U.S. was founded on the Bible, and can only succeed if it stays true to that foundation.

It's also not just an ideology, but a device for mobilizing and often manipulating large segments of the population and for concentrating power in the hands of this new elite. Vladimir Putin in Russia, or Viktor Orban in Hungary, or Erdogan in Turkey tie themselves closely to religious conservatives in their countries, to consolidate an authoritarian form of power. We're seeing this today with Trump's alliances, with our own religious conservatives.

You write that America's conservative churches have been converted into "loyal cells of a shadow political party." What do you mean by that?

Leaders of the movement have figured out that pastors drive votes, and so they organize pastors into these networks, to get them on the same page politically. They give them tools through networks of conservative churches in order to do that, to help them turn out votes for hyper-conservative candidates.

Recently, I found myself at a small church in rural North Carolina, with dozens of evangelical pastors from the area. I was at an event sponsored by an organization called Watchmen on the Wall, which is an initiative of the Family Research Council, which is one of the largest and most powerful policy groups of the Christian right.

Watchmen on the Wall claims to have over 25,000 pastor members. They get all these pastors networked together, and they have these presentations where they tell them what issues matter and how to turn out the vote on these "biblical issues." There wasn't a slightest doubt about which way these pastors were expected to tell their congregations to vote.

They were instructed to form what they call culture impact teams within their churches. They have to figure out which members of their congregation are politically active, well-connected with other members, and motivated to get them to vote according to "biblical values." They gave these pastors these booklets, 200 pages of material that help them form these culture impact teams.

They actually give them tools to get them out to vote. They give them tens of thousands of voter guides, and pastors were encouraged to take as many as they could use and hand out.

Your chapter on the anti-abortion movement in the book is titled "Inventing Abortion." You write that it's a myth that the movement was a reaction to a sincere belief in protecting fetal life. Tell me more. What is this Christian right obsession with abortion? Where does it come from? What is it actually about?

At that time that Roe v. Wade passed, the abortion law reform really conformed with the Republican party's support for Protestant values, birth control. Billy Graham in 1968 said, "In general, I would disagree with the Catholic stance. I believe in Planned Parenthood."

The most liberal abortion law in the country was signed in 1967 by California's Republican governor, Ronald Reagan. Barry Goldwater, who is this great conservative hero, supported abortion law liberalization early in his career. His wife, Peggy, was a co-founder of Planned Parenthood in Arizona.

When Roe v. Wade passed, in fact, there was a wire service run by the Southern Baptist Convention. The bureau chief of the Baptist Press wrote a piece saying that religious liberty, human equality, and justice are advanced by the Supreme Court decision.

This was not an issue that united the Republican party at all, until activists from the new right got involved and were really searching for an issue that could unite the party.

At the time, they'd come together out of concern that institutions like Bob Jones University would be deprived of their lucrative tax advantage. But they knew that preserving tax advantages for racially segregated academies is not going to be an issue that could really unite the party. So they kind of looked around for an issue that could unite conservative Catholics and conservative Protestants.

Bit by bit, they settled on abortion and sort of purged the Republican party of its pro-choice representatives. They needed a single issue that they could get people to vote on, and abortion became that issue.

Let's talk about Donald Trump. He's obviously not a religious man. He knows little of Christian theology. He can't even get the terminology right. He can't really even be bothered to pretend otherwise. So how is a man like that such a hero to the Christian nationalists?

First, the movement realizes that much of their agenda is advanced through the courts and he's delivering them everything that he promised.

I was at a Road To Majority conference, that's Ralph Reed's conference, right before the election. Trump held up a list of justices and he said, "I'm going to choose Supreme Court justices from this list," and every single one of them was pro-life. Of course, the issue wasn't just abortion, but abortion becomes code for the entire agenda.

There's that transactional side of it. But I think that there's another side too. Trump's anti-democratic attributes are a vital part of his attraction for this movement.

This movement doesn't really believe in modern representative democracy. At bottom, they sound as though they prefer autocrats. In fact, what they really want is a king. Paula White is always calling Trump a king. Ralph Drollinger is always talking about kinging and kings. Trump has been referred to as King Cyrus.

The thing about kings like Cyrus is that they don't have to follow the rules. They are the law. Trump understands this longing for the hard hand of the despot. That is what has made him such an attractive leader to this movement.