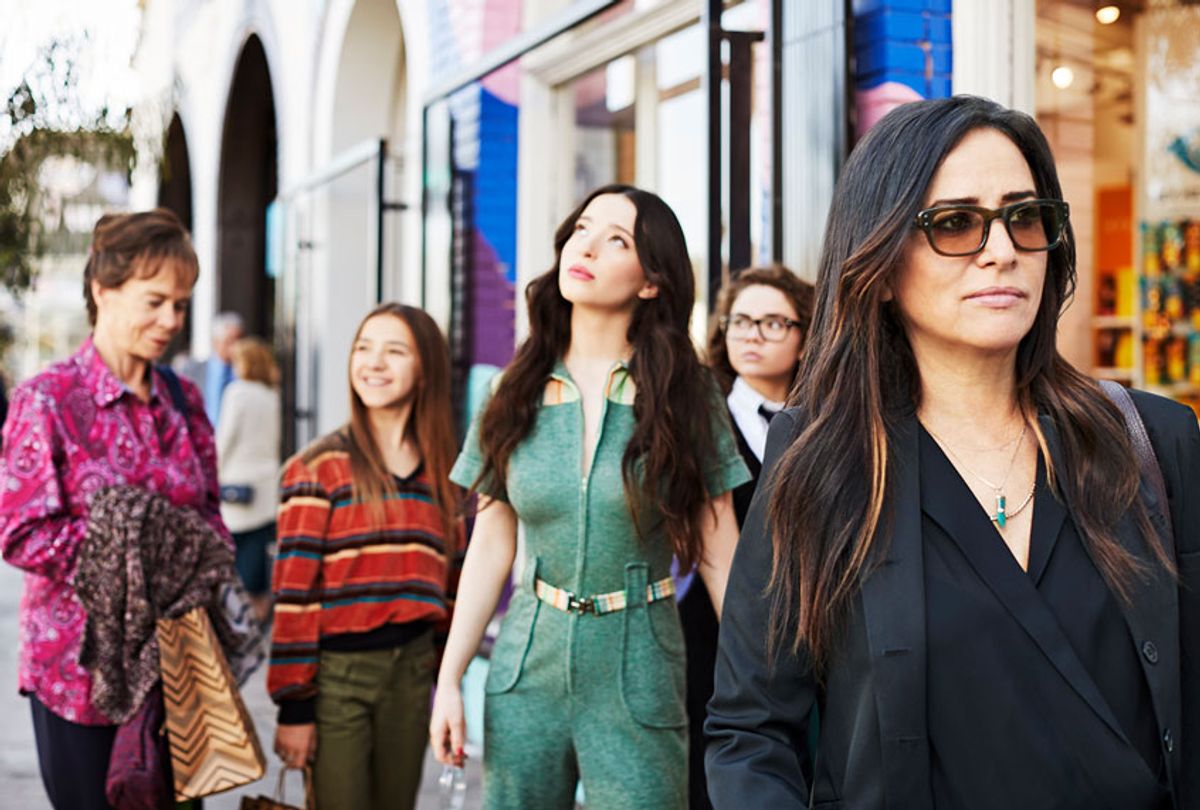 Among the first details that distinguishes the fourth season of "Better Things" from the previous three is the rain. It's not quite heavy, just noticeably emphasized. Drops come down in sheets in one scene and sprinkles in another, adding a touch of shimmer to the pavement outside or employed to emphasize the warm escape offered by the Fox family's home during the day.

Series creator Pamela Adlon wasn't forced to work around the inclement weather – it's a conscious, creative choice, the silent story underneath the larger life arcs Season 4 explores. On the day I arrive on the show's Panorama City set in California, the crew had only recently installed a device known as a rain cloud over the front entry. Adlon sees me and grins.

"I'm so glad you're here to see this!" Then, seconds after she gives the word, the waterworks begin, and it's raining indoors.

To Adlon, this trade mechanism still counts as a touch of magic. It's an illusion created by plumbing, sure. In her eyes, the stand-in for the audience until episodes debut on FX, it's a storm happening with the absence of cloud and sky. "Isn't this cool?" she bellows enthusiastically and I, a woman who only a couple of hours prior was in a city associated with endless precipitation, could only agree.

Adlon's wellspring of awe at the minute elements of all that goes into producing an episode of television is a good thing, because a jaded director can spell the death of an artistic work. And every new season of "Better Things" represents a fresh artistic excursion for Adlon, who took sole control of the series' creative direction in Season 3.

The resulting 12 half-hours earned near universal acclaim for their cinematic and stylistic adventurousness, drawing influence from independent filmmakers such as her primary influence, John Cassavetes. The overwhelming consensus at the time was that Season 3 was Emmy-worthy, but those in charge of nominations missed that message.

Adlon shrugged it off. "It's extremely like cheeky for anybody to feel like they deserve an Emmy or a nomination or anything. Like, I'm gonna name a show that I love so much: 'Catastrophe.' It's never gotten any love from the Emmys at all. And so why the f**k would I presume that my show would be anywhere near getting a nomination?"

Keep in mind, "Better Things" was already one of the best series on television before that. Therefore to say that it exceeds its prior greatness in the fourth season episode made available for review is to be expected at this point. This is not to imply that Adlon takes the show's creative success and her fan's support for granted. Still, she knows she's baking up goodness.

"In terms of this season, I've never felt the way I feel now about making my show. Like it's just, it's flowing," she says as we walk through the set, a replica of the original location reconstructed to scale. "Of course I have my obstacles, but it feels totally different. I've never been so in love with what I'm going into it with it – I  mean, I loved the scripts last season. I love everything about it. I love the scripts from the season before, but there is a different feeling. "

Remember, it's still raining indoors . . .  which inspires Adlon to usher us into Sam's bedroom to conduct our interview. Where else does a person want to be when it's pouring outside your window?

Some transparency is called for here. Salon visited "Better Things" prior to the third season, when many industry eyes were on the show, and Adlon, as it continued on without its co-creator and proved without a doubt that said co-creator basically served as training wheels on a cycle that was ready for professional racing. I also moderated a panel with her last spring, each attended by loyal, passionate fans attuned to the series' emotional resonance.

Once "Better Things" was placed completely Adlon's hands it became even more emotionally honest and complex. She's also evolved the levels of fun she's having with it, placing what she calls "visual worms" throughout the season – random recurring touches only faithful viewers notice. Characters touching the statue at the top of the stairs is one. The rain is another, along with random, immature little visual pranks that pop up on the walls.

Diehards should also take note of the art this season, because Sam has made a few additions. An unintentionally funny one is a modern picture of two figures that, as someone pointed out to Adlon, looks like a version of her hugging her character Bobby from "King of the Hill."

Every new season of Adlon's FX series further deepens the intimacy between Adlon's Sam and her daughters Duke (Olivia Edward), Frankie (Hannah Alligood) and Max (Mikey Madison) and her mother Phil (Celia Imrie), but also with the audience. Therefore, this new season confidently opens with a wordless, three minute and 30 second camera sweep set to Warren Zevon's "Steady Rain" that soars from the rainy Los Angeles outdoors into Sam's home, and that choice needs no explaining. If we didn't know it before, this sequence speaks the show's central purpose.

"It's very visceral," Madison says in another interview. "It's not all black and white, and not everything is explicitly stated. It's just something you have to know in your gut. Our style is to present something and then to just leave it and let people soak in it."

The rain plays into this. When Sam picks up two of her girls and she tells them it's been raining while they've been away, their answer isn't relief at missing it. It's slight disappointment.

"That's so cozy," says Frankie. "I wish it would rain like this all the time."

As we're curled up in Sam's bed, Adlon recalls being inspired by deluges that followed the wildfires in 2018.  "I was evacuated two times," she said. "And this on top of the s**t that went down the last two years. The rain, it was like a miracle. It was this biblical gift after the biblical, horrible s**t."

"Better Things" debuted in 2016, and aired an episode in which Sam endures sexual harassment while she's filming a show. That season ended as America was still reeling from having elected a man who presented himself as a xenophobic racist, and was heard on tape giggling about grabbing women by the p***y.

Can something feel like ancient history and yet still very much a current crisis? Yes, and that's why Adlon constructed "Better Things" and the adventures of Sam and her daughters and mother to be an escape.

Adlon candidly admits she doesn't like speaking to the specific problems of the here and now, "because it's too gross . . . but you said the term 'making space,' you know, in my show," she said. "That's there on purpose, I call it breathing, you know? And that's a thing I wanted – I wanted to leave air, you know. I want to keep the show timeless and built to last."

Adlon considers her show to be "a place where people can go and there's a little bit of magic, but it's all rooted in this reality that I think is what people crave and why they feel so deeply about it. Because, um, there's really something for everybody in the show, and they can get off in different ways."

"I feel like people are almost pit against each other right now . . . because of differences of beliefs, when in reality, I feel like they should be embracing them because life's too short not to." This observation is from the 13-year-old Edward, who was all of nine when "Better Things" debuted.

During a conversation with Edward and her TV sisters Alligood and Madison, it was obvious that growing up in a time of cultural unease has been somewhat more manageable by being able to exist in the "Better Things" world. "People could be thinking the same exact thing about something, but they're not listening to each other. I think the show can help people do that, because they can see how the same things happens with sisters or with actual, like, adults."

Adlon also characterizes "Better Things" as a "PBS guide to parenting hidden in, like, a funny, off-kilter, raunchy, you know, delight." Sam is not a "conventional" TV mother. Neither is Phil typical, or her daughters or her friendships. Instead, she feels real enough for anyone who is done with trying to adhere to expectations of perfection. The Fox family is maturing, before our eyes – Season 3 was Sam's journey to 50, and in these new episodes she's leaping, both boots on, into her own midlife crisis.

Max, her oldest daughter, is figuring out what it means to be an adult and the wages of independence. Frankie heads toward her 15th birthday with more of a solid sense of her identity, and maybe slightly more appreciation for her mother along with the same, ponderous load of self-entitlement that drives Sam crazy.

Even Duke, the reliably sweet youngest, is starting to act like a teenager, which Edwards welcomes. "No relationship is always perfect, in my opinion," she said. "There's always going to be a bump in the road somewhere. So I feel like it's healthy to have some strain, which you'll see in Season 4."

Alligood agrees. "Everyone's getting more honest and more comfortable with themselves, and growing together more," she said.

Back at the set visit, Alligood is in a scene that shocks Sam into the realization that her girls are not only growing up but, inevitably, on the verge of growing beyond her. "I gave a pep talk to Hannah the other day because she's so phenomenal," Adlon said. "Where she has come from, from Season 1 to now. When we started, she never would have been able to do that scene. Now she does more, she lives in the world of the character."

She says the same of all her TV daughters, and Imrie, whose character is contending with a medical condition this season but refuses to become less stubborn. In this world and family Adlon has created, Sam's frustrations are part of the spell she's casting. As agonizing as the strain can get, the joy that follows feels infinitely sweeter – kind of like monsoons after hellfire.

"That was the thing I wanted," she says. "It rains the whole time – it's raining in California. But it's also cleansing, you know?"

Season 4 of "Better Things" premieres with two episodes starting at 10 p.m Thursday, March 5 on FX, and the next day on FX on Hulu.