7 disturbing moments from Trump’s visit to the CDC 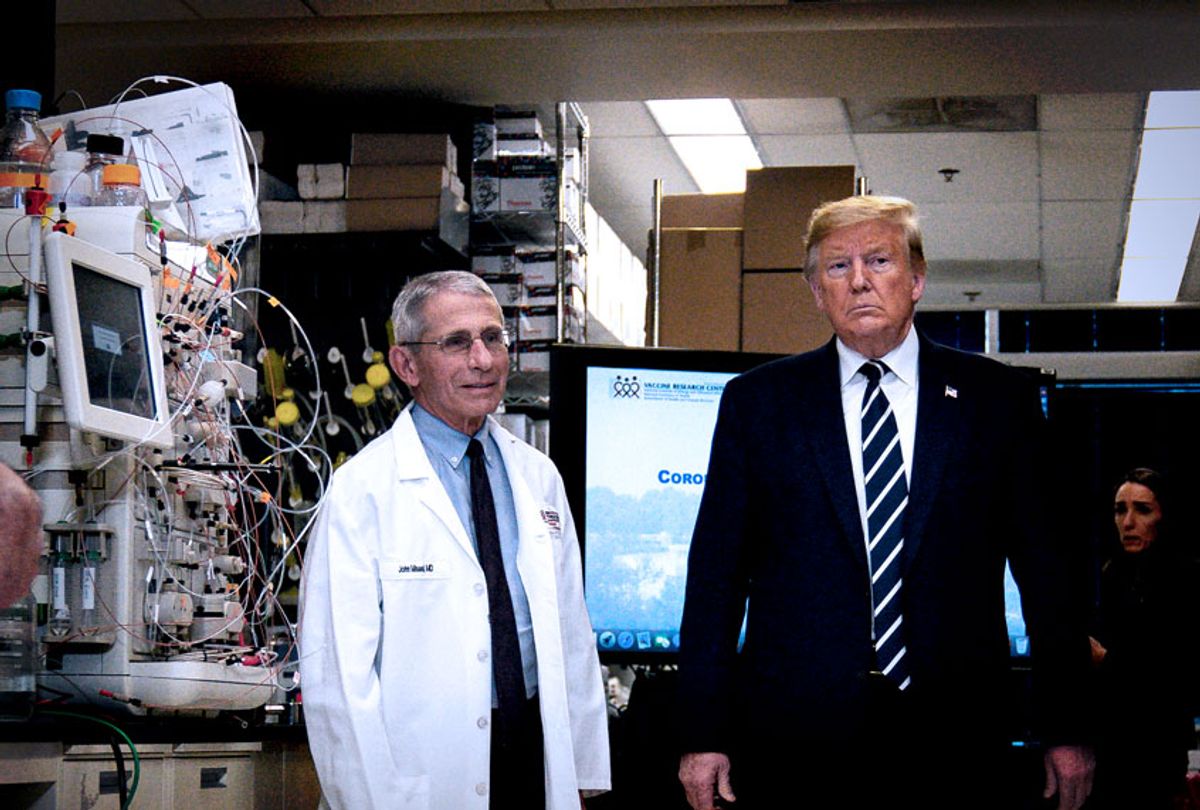 As the administration tries to cope with the ballooning coronavirus crisis, President Donald Trump visited the Centers for Disease Control and Prevention on Friday to assess the response.

Unfortunately, the visit did not inspire confidence in the president's management of the situation. In fact, it included more of the disinformation campaign Trump has been engaging in to diminish the negative impact the reality of the crisis might have on his public standing.

Here are seven of the most ridiculous and disturbing moments:

1. Trump arrived wearing a campaign hat to the CDC.

While the president is, of course, allowed to wear whatever clothing he wants, it was in particularly bad taste to flout his campaign slogan "Keep America Great" hat as he manages a major public health threat. It shows, as his actions do on a daily basis, that he's unable to differentiate his role as president from his political interests in a campaign.

2. Trump lied and said anyone who wants to get tested for the virus can be tested.

Health and Human Services Secretary Alex Azar was trying to explain the status of the federal government's testing operations, which have lagged far behind what medical professionals have needed. But Trump cut him off with an outright lie.

"Importantly: Anybody, right now, and yesterday, anybody that needs a test gets a test. They're there. They have the tests. And the tests are beautiful," Trump said.

AZAR tries to explain that more tests are coming, but Trump waves him off to jump in.

TRUMP: "Anybody that needs a test gets a test…. the tests are all perfect like the letter was perfect. The transcription was perfect. Right? This was not as perfect as that but pretty good." 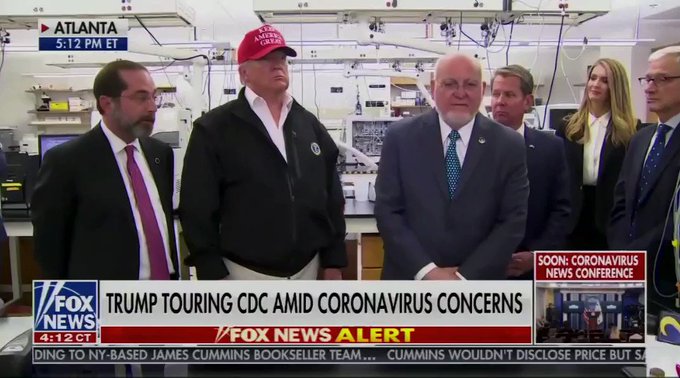 4,205 people are talking about this

3. Trump compared the tests to the conduct that got him impeached.

"The tests are all perfect. Like the letter was perfect. The transcription was perfect, right? This was not as perfect as that but pretty good," he said, referring to his infamous July 25 phone call with Ukrainian President Volodymyr Zelensky. (The call was not, it should be said, perfect.)

4. Trump cited Fox News for data on the virus, rather than the administration he leads.

While standing in a CDC building, Trump seemed to think his favorite network was the best source of information.

"As of the time I left the plane with you," he told reporters, "we had 240 cases. Well, that's at least what was on a very fine network known as Fox News. You love it. But that's what I happened to be watching." 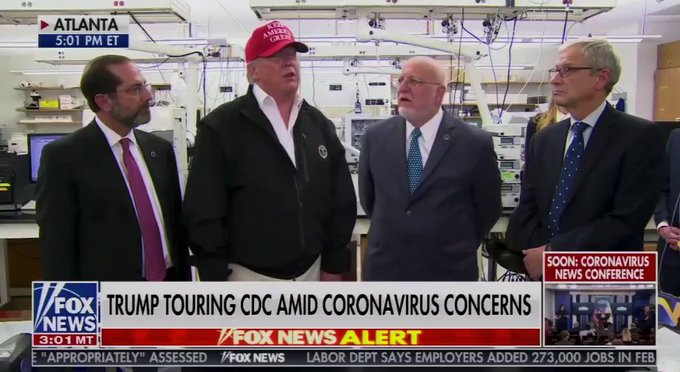 670 people are talking about this

5. Trump went off on a tangent about the ratings for his Fox News town hall.

"How was the show last night?" Trump said of his town hall to a reporter. "Did it get good ratings, by the way?"

"I don't know," a reporter replied.

"Oh really? I heard it broke all ratings," he said. "But maybe that's wrong. That's what they told me, I don't know. I can't imagine that."

6. Robert Redfield, the director of the CDC, said the "most important thing" he wanted to say was praise of Trump.

"First I want to thank you, for your decisive leadership and helping us put public health first. I also want to thank you for coming here today and sort of encouraging and bringing energy to the men and women that you see that work every day to try to keep America safe," he said.

It was a shameful display of sycophancy and ego-stroking. The country would have been much better served to see that one of the government's top public health officials doesn't feel the need to debase himself in front of the president.

At CDC, Trump is flanked by AZAR and REDFIELD — two officials facing most scrutiny over coronavirus response.

TRUMP: Doctor, do you want to make a little statement?

REDFIELD: First I want to thank you, for your decisive leadership…that's the most important thing I want to say. 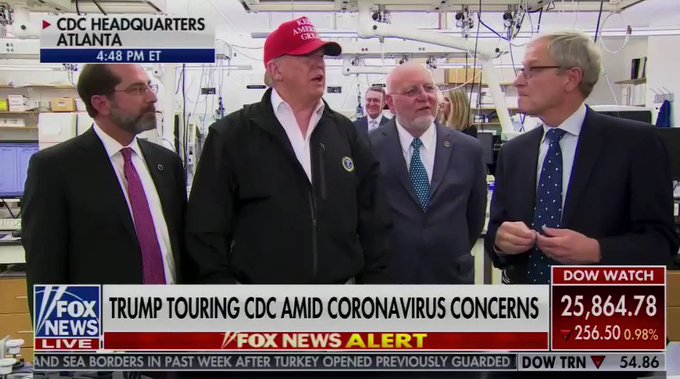 2,098 people are talking about this

7. Trump lashed out at Washington Gov. Jay Inslee, who is dealing with a major outbreak in the state.

"I told Mike [Pence] not to be complimentary of the governor because that Gov is a snake, OK? Inslee," Trump said. "Let me just tell you: We have a lot of problems with the governor, and the governor of Washington, that's where you have many of your problems, OK? So Mike may be happy with him, but I'm not, OK?"

Trump smears Jay Inslee, governor of the state at the heart of the coronavirus outbreak: "I told Mike [Pence] not to be complimentary of the governor, because that governor is a snake." 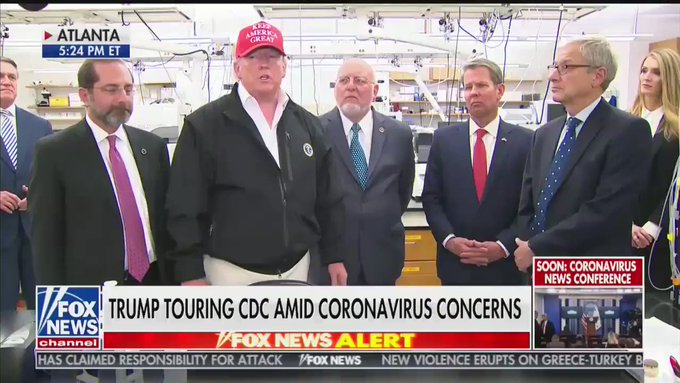 3,819 people are talking about this