"Young people, workers, communities at the frontlines of the #ClimateEmergency are taking it to the streets." 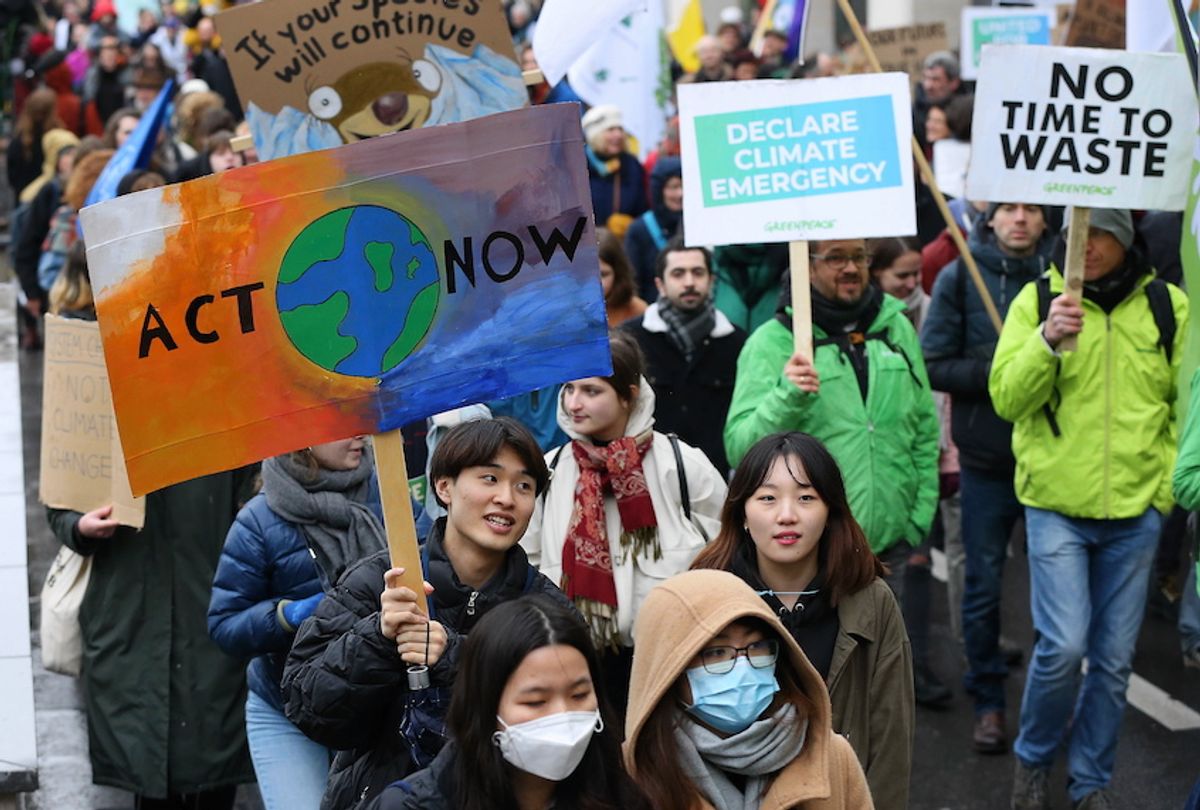 People take part in a "Youth Strike 4 Climate" protest against global warming and climate change outside the Central Station on March 6, 2020 in Brussels, Belgium. (Dursun Aydemir/Anadolu Agency via Getty Images)
--

As the home to multiple European Union institutions, Brussels is considered the E.U.'s de facto capital. The Brussels Times reported that protesters traveled from all across Belgium to participate in the demonstration. Sophie Vandeveugle, a 21-year-old from Namur, told the newspaper, "I'm here as a symbolic measure, because I don't think politicians are listening."

Some climate strikers came from other countries, like 22-year-old Anna of Vienna, Austria. "I'm here because of the E.U. Green Deal, it's not enough, and if this will be the last we will hear about it, then it's very sad," Anna told the Times. "We need decisive and radical action now, not in 50 years; it is too late for a smooth transition."

The demonstration came as the European Commission, the E.U.'s executive branch, continues to endure criticism from climate activists that the European Green Dealintroduced in December by Commission President Ursula von der Leyen isn't adequately ambitious. A draft of the E.U. climate law, the centerpiece of the deal, was unveiled Wednesday.

On Friday, as Common Dreams reported, the climate lobbying watchdog InfluenceMap revealed that representatives of oil giant ExxonMobil met with commission officials who were finalizing the European Green Deal last fall in an effort to ensure that vehicles in Europe will keep running on fossil fuels rather than transitioning to electric.

Critics of the E.U. Green Deal charge that its call for net zero greenhouse gas emissions by 2050 "equals surrender." In an open letter Tuesday, 17-year-old Thunberg and 33 fellow climate strikers wrote: "It means giving up. We don't just need goals for just 2030 or 2050. We, above all, need them for 2020 and every following month and year to come."

Thunberg founded the Fridays for Future movement and has traveled the world to pressure people in power to take the climate crisis more seriously.

After joining the march, she delivered a speech to fellow strikers in Brussels Friday:

"People constantly tell us that we are exaggerating or that we are just naive children, but all we are doing is telling people in power to unite behind the science and give us a safe future," Thunberg told the crowd. "I don't think that is too much to ask for."

"And it does seem like we understand the science better than most, to judge from their actions," she added. "Our house is on fire and this week the European Commission proposed a European climate law which basically says that we will once again wait a few more years to start putting the fire out—and that is not how you act in a crisis, because time is a luxury that we do not have."

Backed by cheers, Thunberg vowed that "we will be a constant reminder that they are failing us every Friday when we strike." This week marked the Nobel Peace Prize nominee's 81st climate strike, which she started outside the Swedish parliament in 2018.

The Brussels-based advocacy group Friends of the Earth Europe pointed out in a tweet Friday that the climate strike closed out Europe's warmest winter on record, according to findings published Thursday by the Copernicus Climate Change Service (C3S), which is implemented by the European Center for Medium-Range Weather Forecasts (ECMWF) on behalf of the European Commission.

"Europe has been experiencing its mildest winter on record. Whilst this was a truly extreme event in its own right, it is likely that these sorts of events have been made more extreme by the global warming trend," C3S director Carlo Buontempo said in a statement Thursday. "With C3S data, individuals, institutions, and policymakers can make informed decisions based on the evolving climate temperatures."

The stated mission of C3S is "to support adaptation and mitigation policies of the European Union by providing consistent and authoritative information about climate change."

Mauro Facchini, Head of the Earth Observation Unit at European Commission Directorate-General's DEFIS, said Thursday that "now more than ever, the role of Copernicus is becoming more important. The European Commission relies on programs like Copernicus and institutions like the ECMWF to provide quality assured operational data to support the development of a climate-resilient society."

"Copernicus will effectively contribute to the implementation of the European Commission Green Deal in various sectors," Facchini added.