Isaac Asimov, the candy store kid who dreamed up robots

Our most durable ideas about robots don’t come from science, but the imagination of sci-fi pioneer Isaac Asimov 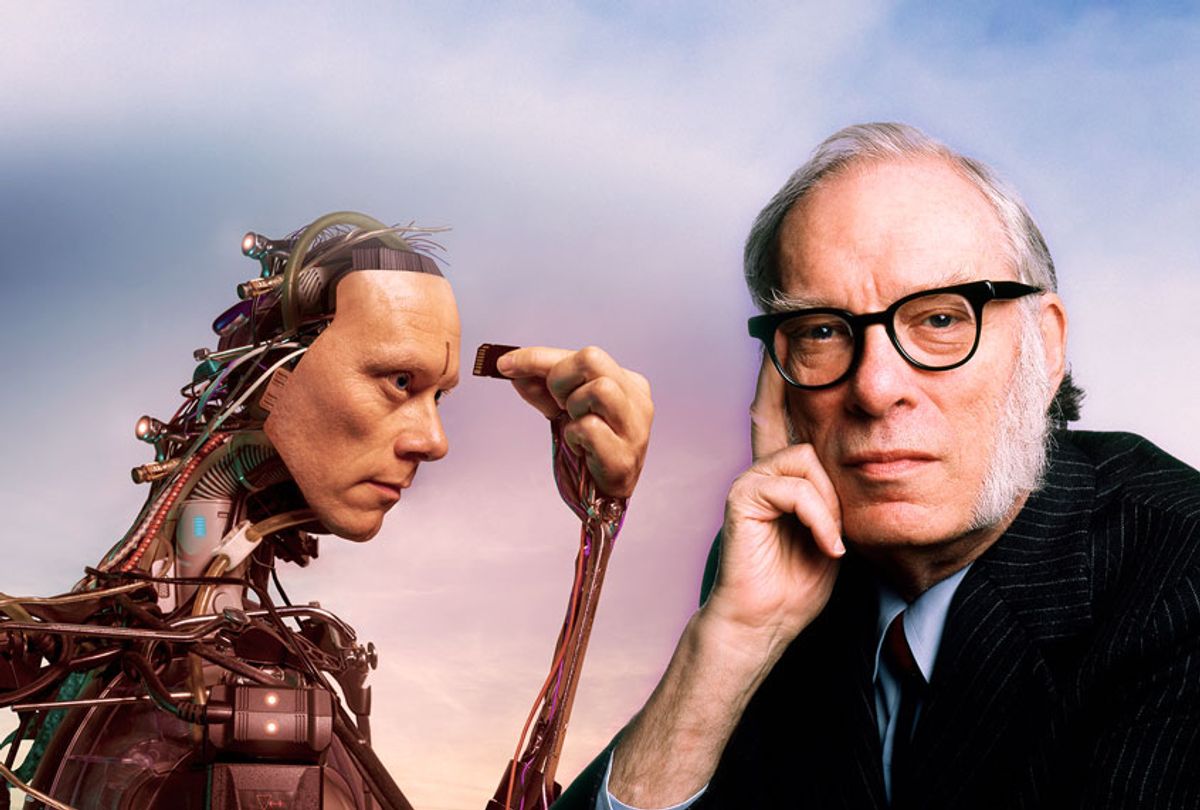 This excerpt is adapted from “Generation Robot” by Terri Favro. Published by Skyhorse Publishing, 2020. All rights reserved.

The year 2020 marks a milestone in the march of robots into popular culture: the 100th anniversary of the birth of science fiction writer Isaac Asimov. Asimov coined the word 'robotics', invented the much-quoted Three Laws governing robot behavior, and passed on many myths and misconceptions that affect the way we feel about robots today.

A compulsive writer and homebody—possibly, an agoraphobic—Asimov hated to travel: ironically, for a writer who specialized in fantastic tales often set on distant worlds, he hadn't been in an airplane since being flown home from Hawaii by the US Army after being released from service just before a test blast of the atomic bomb on the Bikini Atoll. (Asimov once grimly observed that this stroke of luck probably saved his life by preventing him from getting leukemia, one of the side effects that afflicted many servicemen who were close to the blast.)

By 1956, Asimov had completed most of the stories that cemented his reputation as the grand master of science fiction, and set the ground rules for a new field of study called "robotics," a word he made up. Researchers like Marvin Minsky of MIT and William Shockley of Bell Labs had been doing pioneering work into Artificial Intelligence and Robotics since the early 1950s, but they were not well-known outside of the scientific and business communities. Asimov, on the other hand, was famous, his books so commercially successful that he quit his job as a tenured chemistry professor at Boston College to write full-time. Asimov's 1950 short story collection, I, Robot, put forward a vision of the robot as humanity's friend and protector, at a time when many humans were wondering if their own species could be trusted not to self-destruct.

Born in January 1920, or possibly October 1919—the exact date was uncertain because birth records weren't kept in the little Russian village where he came from—Asimov emigrated to Brooklyn in 1922 with his parents. Making a go of life in America turned out to be tougher than they expected, until his father scraped together enough money to buy a candy store. That decision would have a seismic impact on Isaac's future, and on robotics research and the narratives we tell ourselves about human-robot relationships to this day.

As a kid, Isaac worked long hours in the store where he became interested in two attractions that pulled in customers: a slot machine that frequently needed to be dismantled for repairs; and pulp fiction magazines featuring death rays and alien worlds. Soon after the first rocket launches in the mid-1920s, scientists announced that space travel was feasible, opening the door to exciting tales of adventure in outer space. Atomic energy—the source of the death rays—was also coming into public consciousness as a potential "super weapon." But both atomic bombs and space travel were still very much in the realm of fiction; few people actually believed they'd see either breakthrough within their lifetimes.

The genre of the stories in the pulps wasn't new. Fantastical tales inspired by science and technology went back to the publication of Mary Shelley's Frankenstein in 1818, which speculated about the use of a revolutionary new energy source, electricity, to reanimate life. Jules Verne, H. P. Lovecraft, H. G. Welles, and Edgar Rice Burroughs all wrote novels touching on everything from time travel, to atomic-powered vehicles, to what we now call genetic engineering. But the actual term, "science fiction," wasn't coined by any of them: that distinction goes to Hugo Gernsbeck, editor of the technical journal, Modern Electrics, whose name would eventually be given to the HUGO, the annual award for the best science fiction writing.13

Gernsbeck's interest in the genre started with a field that was still fairly new in his time: electrical engineering. Even in 1911, the nature of electricity was not fully understood, and random electrocutions were not uncommon; electricians weren't just tradesmen, but daredevils, taking their lives in their hands every time they wired a house or lit up a city street.14 Gernsbeck, perhaps gripped by the same restless derring-do as his readers, wasn't satisfied with writing articles about induction coils. In 1911, he penned a short story set in the twenty-third century and serialized it over several issues of Modern Electrics, a decision that must have baffled some of the electricians who made up his subscribers. At first, Gernsbeck called his mash-up of science and fiction "scientifiction," mercifully changing that mouthful to "science fiction." He went on to publish a string of popular magazines, including Science Wonder Stories, Wonder Stories, Science, and Astounding. (Gernsbeck's rich imagination didn't stretch far enough to come up with more original titles.)

Asimov's father stocked Gernsbeck's magazines in the candy store because they sold like hotcakes, but he considered them out-and-out junk. Young Isaac was forbidden to waste time reading about things that didn't exist and never would, like space travel and atomic weapons.

Despite (or possibly because of) his father's objections, Isaac began secretly reading every pulp science fiction magazine that appeared in the store, handling each one so carefully that Asimov Senior never knew they had been opened. Isaac finally managed to convince his father that one of Gernsbeck's magazines, Science Wonder Stories, had educational value—after all, the word "science" was in the title, wasn't it?15

Isaac sold his first short story when he was still an eighteen-year-old high school student, naively showing up at the offices of Amazing Stories to personally deliver it to the editor, John W. Campbell. Campbell rejected the story (eventually published by a rival Gernsbeck publication, Astounding) but encouraged Isaac to send him more. Over time, Campbell published a slew of stories that established Isaac, while still a university student, as a handsomely paid writer of science fiction.

When you read those early stories today, Asimov's weaknesses as a writer are painfully glaring. With almost no experience of the world outside of his school, the candy store, and his Brooklyn neighborhood— and no exposure to contemporary writers of his time like Hemingway or Fitzgerald—Isaac fell back on the flat, stereotypical characters and clichéd plots of pulp fiction. Isaac did have one big thing going for him, though: a science education.

By the early 1940s, Asimov was a graduate student in chemistry at Columbia University, as well as a member of the many science fiction fan clubs springing up all over Brooklyn whose members' obsession with the minutiae of fantastical worlds would be familiar to any ComicCon fan in a Klingon costume today. Asimov wrote stories that appealed to this newly emerging geeky readership, staying close enough to the boundaries of science to be plausible, while still instinctively understanding how to create wondrous fictional worlds.

The working relationship between Asimov and his editor, Campbell, turned into a highly profitable one for both publisher and author. But as Asimov improved his writing and tackled more complex themes, he ran into a roadblock: Campbell insisted that he would only publish human- centered stories. Aliens could appear as stock villains but humans always had to come out on top. Campbell didn't just believe that people were superior to aliens, but that some people—white Anglo-Saxons— were superior to everyone else. Still a relatively young writer and unwilling to walk away from his lucrative gig with Campbell, Asimov looked for ways to work around his editor's prejudices. The answer: write about robots. Asimov's mechanical beings were created by humans, in their own image; as sidekicks, helpers, proxies, and, eventually, replacements. Endowed with what Asimov dubbed "positronic brains," his imaginary robots were even more cleverly constructed than the slot machine in the candy store.

Never a hands-on guy himself, Asimov was nonetheless interested in how mechanisms worked. Whenever the store's one-armed bandit had to be serviced, Isaac would watch the repairman open the machine and expose its secrets. The slot machine helped him imagine the mechanical beings in his stories.

Although Asimov can be credited with kick-starting a generation's love affair with robots, he was far from their inventor. (Even I, Robot borrowed its title from a 1939 comic book of the same name written by a pair of brothers who called themselves Eando Binder, the name eventually bestowed on the beer-swilling, cigar-smoking robot star of the TV show, Futurama.) But in writing his very first robot story, Asimov was both jumping on a new obsession of the 1920s, and mining old, deep myths going back to ancient Jewish tales of the golem, which was a man made of mud and magically brought to life, as well as stories as diverse as Pygmalion, Pinocchio, and engineering wonders like the eighteenth century, chess-playing Mechanical Turk, and other automatons.

Robots have an ancient history and a surprisingly whimsical one. Automatons have been frog marching, spinet playing, and minuet dancing their way out of the human imagination for hundreds, if not thousands, of years, but it wasn't until the machine age of the early twentieth century that robots appeared as thinking, reasoning substitute humans. The word robot—Czech for "mechanical worker"—wasn't coined in a patent office or on a technical blueprint, but as the title of a fantastical play by Karel Capek, Rossum's Universal Robots, which was first performed in 1920, the reputed year of Isaac Asimov's birth. In adopting robots as his main characters, and the challenges and ethics of human life in a robotic world as one of his central themes, Asimov found his voice as a writer. His robots are more sympathetic and three-dimensional than his human characters. In exploring the dynamics of human-robot partnerships—as Asimov would do particularly well in detective/robot "buddy" stories, such as his 1954 novel Caves of Steel— he invented a subgenre within the broader world of science fiction.

Asimov's humanoid robots were governed by the Three Laws of Robotics. More whimsical than scientific, they established ground rules for an imaginary world where humans and mechanical beings coexisted. Eventually, the Three Laws were quoted by researchers in two academic fields that were still unnamed in the 1940s: artificial intelligence and robotics.

First published by Astounding magazine in 1942 as part of Asimov's fourth robot story "Runaround", the Three Laws stated that:

According to Asimov's biographer Michael Wilson in Isaac Asimov: A Life of the Grand Master of Science Fiction (New York, Carrol & Graff, 2005), "Asimov was flattered that he had established a set of pseudoscientific laws. Despite the fact that in the early 1940s the science of robotics was a purely fictional thing, he somehow knew that one day they would provide the foundation for a real set of laws."

The Three Laws would continue to appear not only in the world of robot-driven books and films—like Aliens (1986), where the laws are synopsized by the synthetic human Bishop when trying to reassure the robot-phobic heroine Ellen Ripley—but by some real-world roboticists and AI researchers, who are now considering how to develop a moral code for machines that may one day have to make independent, life-or-death decisions.

Terri Favro is the author of “Generation Robot: A Century of Science Fiction, Fact, and Speculation” (published 2018; updated in 2020 by Skyhorse Publishing).