Think this primary season is gut-wrenching? I was there for the trauma of 1968

If you supported Sanders or Warren, I've been there — and it was much worse. Keep fighting; our planet needs you 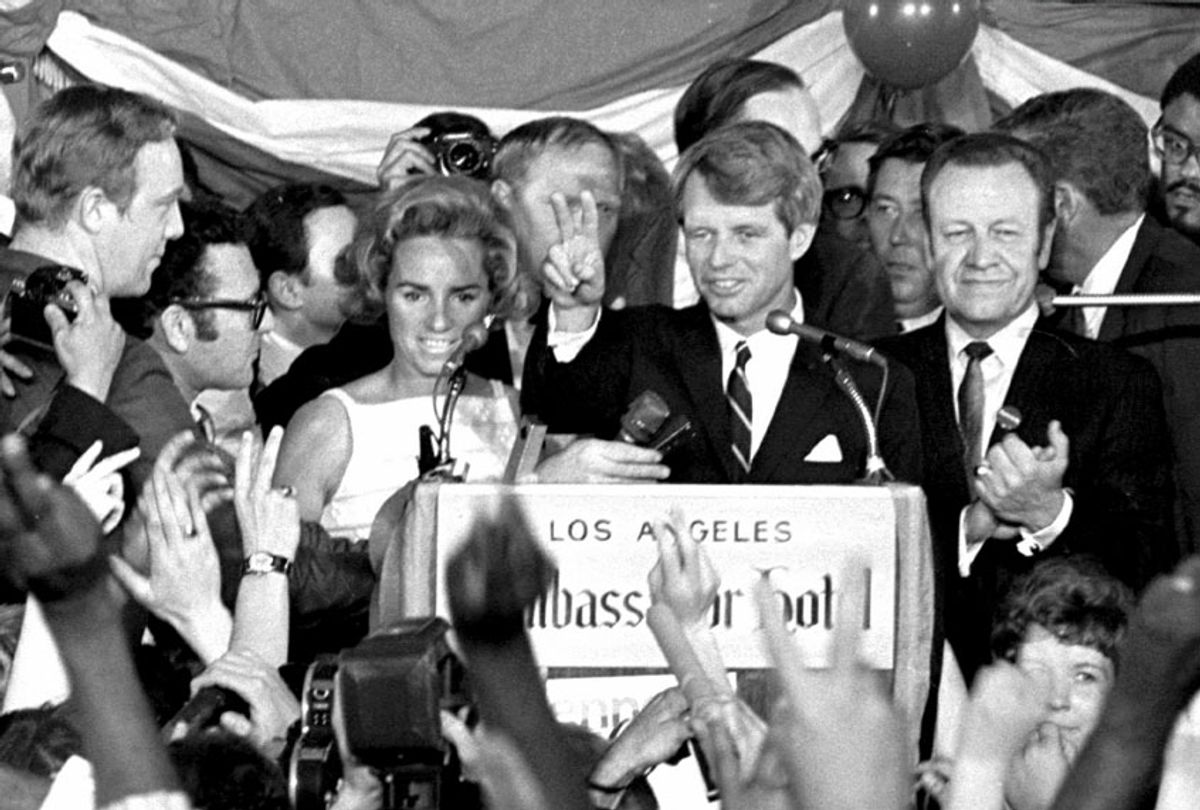 This June 5, 1968 file photo shows Sen. Robert F. Kennedy speaking his final words to supporters at the Ambassador Hotel in Los Angeles, moments before he was shot on June 5, 1968. At his side are his wife, Ethel, left, and his California campaign manager, Jesse Unruh, right. Football player Roosevelt Grier is at right rear. Associated Press Hollywood reporter Bob Thomas was on a one-night political assignment in June 1968 to cover Kennedy’s victory in the California presidential primary when mayhem unfolded before his eyes. (AP Photo/Dick Strobel, File)
--

An earlier version of this article was published at Insider NJ. Used by permission.

In all likelihood, the days since the California primary have been tough for millions of supporters of Bernie Sanders and Elizabeth Warren. They have invested their time, money and passion in a primary process that seems hell-bent on delivering former Vice President Joe Biden as the antidote to President Trump.

Yes, Sanders won California — but lost 10 out of the 14 Super Tuesday states. He now has no realistic pathway to the nomination. Warren didn't come close to winning her own state, let alone others. As expected, she withdrew from the race later in the week.

On the way from New Jersey into New York on Wednesday morning, I was overcome with emotion reflecting on what was one of the darkest and most defining moments of my life a half-century ago.

It was the morning after the 1968 California Democratic primary, when it was clear that Robert F. Kennedy was in grave condition, having been shot after celebrating his pivotal California primary win after midnight on June 5.

My mother, Patricia (who had almost become a nun before I entered the world), had always encouraged my unnatural and precocious obsession with politics. She had paid me 25 cents to name all the presidents, the states and their capitals. For an additional quarter, I named all the members of John F. Kennedy's cabinet.

I don't think she ever forgave herself for letting me stay up to watch the returns with her, and the brutality of what unfolded. For us, for the nation, this political murder was not a one-off.

Talk about winning not being everything.

RFK's assassination has to be taken in the context of just how blood-soaked our politics was and really always has been, if you include our further-notice wars.

Just a few years before Bobby Kennedy's death, I had been left alone to watch my brothers and sisters, so my parents could go to mass at St. Catherine's in Glen Rock, New Jersey, to pray for the soul of JFK, who had been shot in Dallas. We watched on live TV as Jack Ruby shot Lee Harvey Oswald, the president's apparent assassin.

Just two months before RFK's murder, in April of 1968, I had gone with my father and a delegation from the Knights of Columbus to the African-American neighborhood on Broad Street in Ridgewood, to join a multi-racial ecumenical march on the Sunday after Dr. Martin Luther King Jr.'s murder.

Over a half-century later, I can still recall the birds chirping as I held my father's hand in a sea of strangers. I can still hear the sound of what memory informs me was thousands of shoes shuffling on the blacktop, all headed in one direction.

Both my parents are gone now, and they left me one enduring gift: They didn't try to protect me from the absolutely cutthroat nature of American politics, and the belief that I had a moral obligation to get in the knife fight.

In the aftermath of the 1968 Spring of Death, to their everlasting credit, my parents let me get engaged full-bore in local protests against the Vietnam War.

You think Twitter is mean? Try walking with peace activists in the streets of northwest Bergen County around that time, as Nixon's "silent majority" let you have it from the sidewalk for not "supporting our boys in Vietnam" and "giving comfort to the enemy."

Sometime in high school, as I was reading the inaccurate accounts of the protests I had attended, I gravitated to journalism. I came to see the power in being the person who digests current events and distills them as news.

It helped that local journalism paid 10 cents a column-inch, plus $5 if you took a picture with the story. So as a high school kid working for the Ramsey-Mahwah Reporter (with a very patient editor, Stephanie A. Ralston), I had a seat at the reporter's table covering borough council meetings.

I had standing, sitting at the press table, when I couldn't even drive.

As I found my voice and the power of the printed word, my family came apart. My father, who had actively campaigned for RFK in the New Jersey primary — held the same night as California — was really never the same again.

The textile industry was being exported overseas, and he soon lost his job. Alcohol was his medication of choice to relieve the stress of having brought six kids into the world and not being able to financially support them in a country that really didn't care one way or the other. He started living in his car, or in rooming houses.

The first elected official I ever met, as a teenager, was Bergen County Sheriff Joe Job — when he served me the foreclosure papers on our family's home.

We moved into rental housing in Ramsey along the Erie-Lackawanna tracks, living with my mother and my five brothers and sisters, where I went to high school. I cobbled together a living by getting a good union job across the street in the Shop Rite that the Inserra family owned.

I wanted to be a lawyer, like Bobby Kennedy, but the economics of being the oldest of six kids in a single-parent household put that out of reach. I was happy I could afford the $350 for tuition at Ramapo College.

In the decades since I have worked all kinds of jobs: classical dance, roofing, farming, carpentry, loss prevention, government, soil mining, timber harvesting. But I was always writing, and always asking myself how I know what I know, as all good journalists should.

I hope that young activists and supporters of Warren and Sanders do not become discouraged the way I did when Humbert Humphrey got the 1968 Democratic nomination, clearing the path for the national trauma of Richard Nixon's presidency.

Just know this: Your cause is just, and this country has been a mess for a long time. As Dorothy Day, the founder of the Catholic Worker, put it, "Our problems stem from our acceptance of this filthy, rotten system."

Don't ever accept it. Stay fully engaged, because to disengage is to succumb to the fear.

Destiny is counting on you. The hopes of all our ancestors reside in you.

Oh, and I'm sorry about the planet we are leaving you.