Right-wing conservatives canceled the Dixie Chicks, but the band is back and full of feminist fury 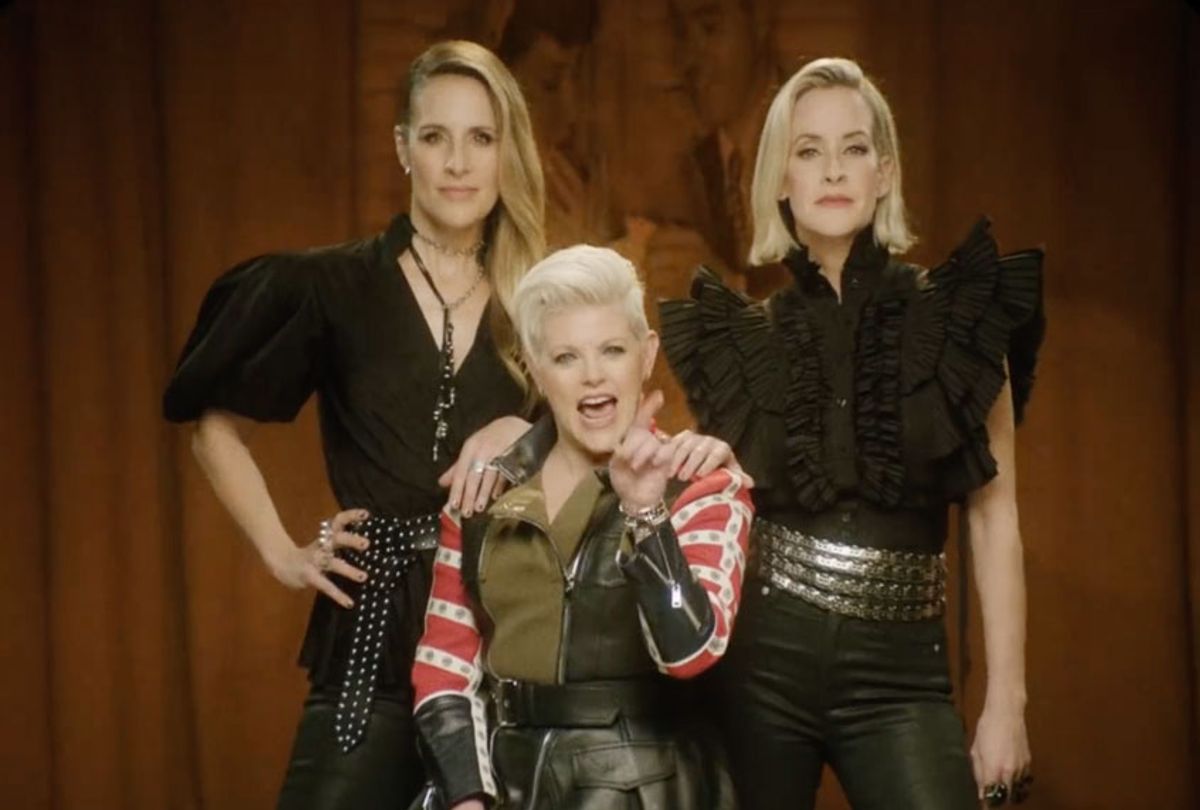 The way right-wing America, in a surge of reactionary political correctness, canceled the Dixie Chicks is a legend, one that has calcified in the years since into a simplistic morality tale about the efforts to silence critics of the Bush administration and the Iraq War.

The story goes like this: The Dixie Chicks were a popular and uncontroversial country-western band, up until the fateful day in 2003 that lead singer Natalie Maines told a crowd in London that she and her bandmates, all Texans, "do not want this war, this violence, and we're ashamed that the President of the United States is from Texas."

What happened next: Right-wing America, in full pro-war fever, erupted in outrage. Dixie Chicks CDs were burned, radio stations pulled their songs, and while they put out one more album, the stress of it all caused the band to mostly peter out.

As a fellow Texan who was living in Austin at the time, I can say that the real story is more complicated. The Iraq War was, in many ways, just an excuse. A lot of conservative country fans, especially men, had been aching to ruin the Dixie Chicks for a long time. Like many female country artists before them, the Chicks had been viewed as a threat, in part because they upstaged male artists by being better musicians, and in part because they were suspected of having feminist leanings. They were victims of the same forces that have led country radio to heavily limit how many songs by women get played, lest tender male egos get too ruffled.

Now the band is back, after 14 years of not releasing new material, with a single and upcoming album both titled "Gaslighter." The song's lyrics, about a bad and lying ex, are clearly personal to Maines. Her ex-husband, actor Adrian Pasdar, removed all doubt of that by trying to block the song from release.

But it's also clear that the title, which refers to a term feminists have introduced into the lexicon to describe how bad men bamboozle their victims and others to hide their abusive behavior, positions the song as a feminist anthem. The video makes more clear that this is meant as an angry lambast for all women who are sick of being harassed or abused and then told they're just imagining their own lives. The Dixie Chicks, it appears, may be returning just in time to provide a soundtrack for country fans looking for a little #MeToo music.

But none of this should be a surprise. This feminist vibe of the Dixie Chicks is why a lot of men hated them back in the day and couldn't wait to exile them from the world of country music. This is a band that played the Lilith Fair, after all. But what really pissed a lot of men off was their 1999 song "Goodbye Earl," an irresistible ditty about two women who murder an abusive husband and "don't lose any sleep at night" because "Earl had to die."

I used to sing karaoke at this bar outside of Austin, and a couple of women I hung out with would often sing this song. And when they would, men would ask me why we liked that "man-hating" song. I found their anger bizarre, since the fictional Earl is so violent he "walked right through that restraining order and put her in intensive care." But the distinction between hating abusers and hating men was lost on these men, whom I suspect, all these years later, were telling on themselves.

(These same men never had a problem with the many, many murder ballads in country music about men killing women, mostly for cheating but also, in "The Red-Headed Stranger" by Willie Nelson, for attempted horse theft.)

Nothing new about this, as female artists such as Dolly Parton, Loretta Lynn, and Bobbie Gentry have all done their time putting up with suspicion and anger because they have songs with lyrics celebrating women's independence and suggesting that it might not be cool that men have so much power over women's lives. I suspect that's one reason so many cheating songs by women focus their ire on the "other woman" and not the man, lest fragile male egos get ruffled. Even modern variations, like Carrie Underwood's "Before He Cheats," that do focus anger at the man make sure to lob insults at the other woman (a 'bleached blonde tramp" who "can't shoot whiskey") to make the anger at the man go down more easily.

There's a long-standing history of country artists smuggling progressive ideas into songs by writing lyrics that are just vague or ambigious enough to create a shield against conservative griping. For instance, there's a lot of country "girl power" songs that celebrate female strength, like "I'm A Survivor" by Reba McEntire, but they rarely issue a direct challege to male abuses that require women to be such survivors.

This is-this-or-isn't-it-progressive dance is evident in the song Maines was introducing when she insulted Bush, which was "Travelin' Soldier," a song about a young man who dies in the Vietnam War. It was totally possible for conservatives to hear that song not as an anti-war song, but as a sentimental tribute to the sacrifice of men who die in war. But Maines, by denouncing the Iraq War, ripped away that plausible deniability.

The cancellation of the Dixie Chicks by right-wingers was about sending a message to other country musicians. There's little doubt that country musicians tend, being creative types, to lean more left than their fan base, and by making an example of the Dixie Chicks, conservatives sent a message to other musicians to keep any progressive notions under wraps.

But because they are marked as "bad girls" whose progressive views aren't in question, the Dixie Chicks are also uniquely placed to offer a real challenge to this fear of country musicians to be too overt in questioning conservative politics or oppressive power structures. And it's delightful to see that, after all these years, they show no interest in trying to present themselves as chastened and ready to pretend to be "apolitical," i.e. not interested in challenging conservatives.

That much was evident in 2016, when the Dixie Chicks backed up Beyoncé at the Country Music Awards in a shatteringly spectacular performance of "Daddy Lessons" from Beyoncé's smash hit album "Lemonade." Conservatives were outraged, and in that outrage, exposed their racism, because they can't admit that  Beyoncé played a better country song than most of the people on the Country Hot 100. But the performance itself was spectacular, and even more of a call-out of country music's timidity than most people realize. "Daddy Lessons" samples "Long Time Gone," a 2002 Dixie Chicks song that criticizes modern-day country as music that "ain't got no soul."

The kowtowing to conservatism is no doubt part of the reason that country music has long had a no-soul problem. When country music has power, it's because it draws on the stories of real people's struggles and triumphs. But you can't draw on that power when tiptoeing around the easily hurt feelings of people who don't want to hear about economic injustice, oppression, violence, or any of the other inevitably political forces that shape people's lives.

But the Dixie Chicks are back and unapologetic. And they're joining up in what may be a mini-feminist revolt in country music, led by artists like Miranda Lambert, Kacey Musgraves, and the Highwomen who are performing music with meatier ideas about women's lives — even if telling those truths is regarded as "man-hating." Maybe these women can make permanent changes to a genre that often threatens to censor itself into frivolousness.