Why is Bernie losing? Because he's not running against a woman

Bernie Sanders is doing much worse against Joe Biden than he did against Hillary Clinton. Notice the difference? 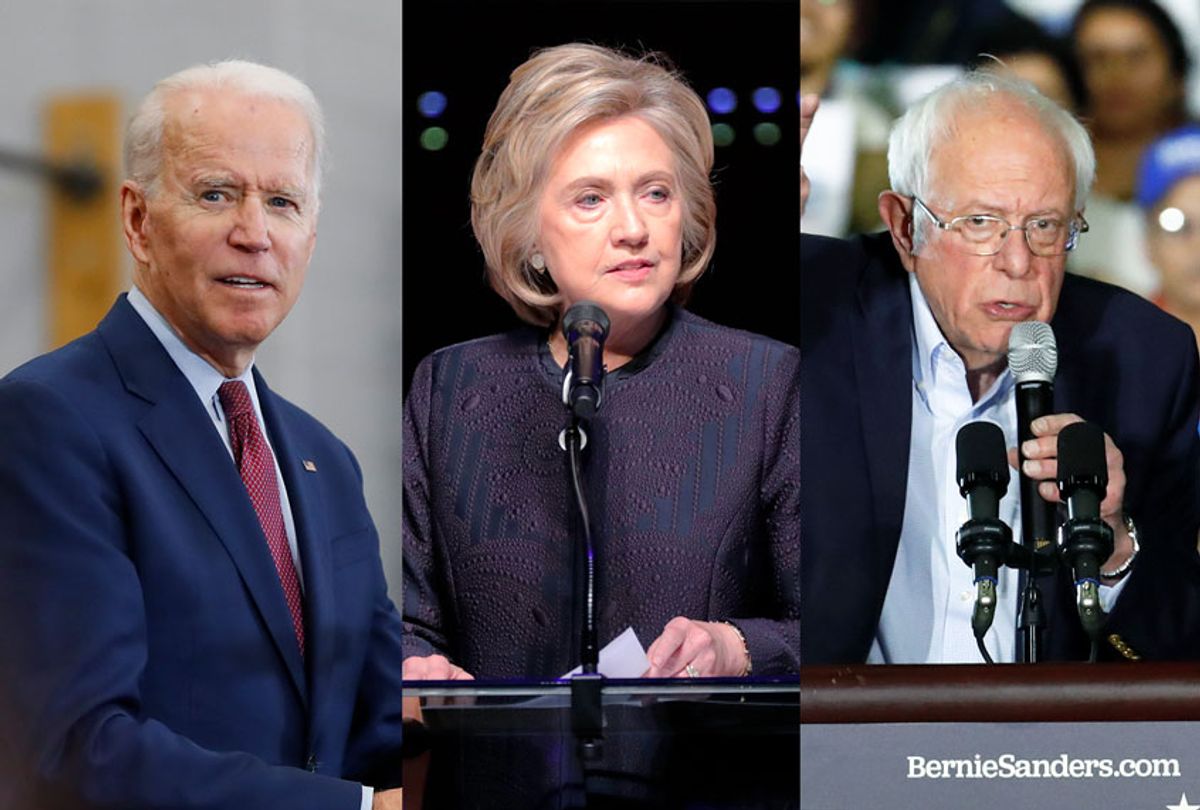 On Tuesday night, Sen. Bernie Sanders of Vermont did something out of character for a politician: He stayed silent.

Sanders needed to meet or outperform his election results from his 2016 Democratic primary race against Hillary Clinton, especially in Midwestern states like Michigan and Missouri. He didn't. Instead he saw his share of the vote shrink dramatically in his contest with former Vice President Joe Biden. (Sanders had won roughly half the vote against Clinton in both those states. That fell to 36.5% in Michigan and 35% in Missouri.)

Rather than make the customary speech to supporters, urging them to rally for the next round of primaries, Sanders instead flew home to Vermont. Early on Wednesday afternoon, he held a press conference making clear he will stay in the race for now, although even the mathematical possibility of victory is almost gone.

It's not surprising that Sanders felt gut-punched. In 2016, the argument was that he performed well against Clinton in those two states — beating her in Michigan, equaling her in Missouri — because voters, especially white Midwestern voters, were angry at the Democratic establishment for being too timid and hungered for Sanders' economic populism. After Clinton lost to Donald Trump in November 2016, Bernie's more trollish supporters harassed Clinton supporters with cries of "Bernie woulda won," leaning on the claim that she lost these white Midwestern voters due to "neoliberalism."

These 2020 Midwestern losses smash that theory to bits. Historically, Biden hasn't just been to the right of Sanders, but also clearly to Clinton's right as well. In a "neoliberal" contest between Clinton and Biden, Biden is the clear winner. Biden supported the devastating GOP bankruptcy bill, which Clinton voted against. Biden has openly flirted with cuts to Social Security, which Clinton has never supported. Biden was ranked more liberal than 69% of the Senate, but when both were members of that chamber, Clinton was ranked more liberal than 84% of the Senate.

No, Sanders did well in these Midwestern contests in 2016 for a simple reason: He was the man in the race.

The difference we see right now is in white voters, especially white men, who bailed out on Sanders in large numbers now that they've got another white man to vote for.

Virtually every category of white voter swung 20+ net points in Michigan from 2016 to 2020 via @CNN exit polls: pic.twitter.com/bxws1HqVSj

As Ezra Klein of Vox put it on Twitter, we're looking at "a natural experiment in — to put it gently — the role gender plays in voter preferences" What that experiment reveals is that Biden is far outperforming Clinton, even though "Clinton was a sharper candidate with more support from party leadership and more money." Add to that the fact Sanders should arguably be a stronger candidate than he was in 2016 — he has far more money and universal name recognition — and the overall picture is looking mighty sexist.

There's no point in hiding how enraging this is for many women. For four years now, feminists have argued that sexism played a major role both in the ugliness of the 2016 primary and in Clinton's loss in the Midwest to Trump. In response, we have been gaslit and harassed, told we were imagining things, told that sexism isn't a factor anymore, and that Trump's victory was about "economic insecurity" instead.

But we were right. It was about gender the whole time.

At least it was in these much-watched Midwestern states. The data elsewhere shows a more confused picture, particularly in earlier contests where more candidates were on the ballot. In other states Biden won, like Texas, the effect is more muted — Sanders got 41% of white voters in 2016, but 30% this time, for instance. That's probably because Texas Democrats of all races are more cosmopolitan, while rural Democrats still have a lot of power in the Midwest.

Still, white male identity politics mattered a lot in Oklahoma, where Sanders saw his share of white voters drop from 56% to 25%. And it mattered in Tennessee, where Sanders saw white voters leave him, dropping him from 42% to 26% of those voters. And while Sanders is set to win the lily-white state of North Dakota, he still dropped from 64% to 53% in those four years.

To be certain, there are plenty of other factors impacting this race. Many of the people voting for Biden this time also voted for Clinton in 2016, suggesting that voting for a man was less important to them than voting for a standard-issue Democrat. (This was especially true of black voters.) Turnout continues to be high, especially in states like Michigan, but the percentage of that turnout that is young voters continues to plummet.

Overall, this paints a picture similar to the one we saw in the 2018 midterms: Everyday Democrats are alarmed by Trump and turning out in huge numbers, because they want to do whatever they can to get Trump out of office. Not all of them are motivated by sexism, and in fact, about half of Sen. Elizabeth Warren's former supporters have broken for Biden. Many of the suburban women activated by their anger over Trump were probably never going to vote for Sanders in any race, but voted for Biden because they don't have an alternative. All these things are contributing to Biden's rapidly increasing share of the delegate count.

But Michigan and Missouri were a neat scientific experiment all the same. Sanders did remarkably well in both states in 2016, and argued that his economic populism rather than his gender was the reason. We got to re-run the experiment in 2020, but with a more conservative male opponent this time. The result? Biden did way better than Hillary Clinton, despite being clearly more conservative, in the same head-to-head match-up.

Does this mean Americans can never elect a female president? No. Clinton got nearly 3 million more votes than Trump in 2016. Partisanship appears to matter more than gender when it comes to general elections. Some states, like Texas, present data that suggest gender wasn't much of a factor in the primary. But in the Midwest, which is where Clinton lost in 2016, gender seems to have mattered a lot.

It should be indisputable now that a strong preference for white male leaders is still guiding Democratic primary voters, at least in some parts of the country. It's still an open question whether Biden can do better than Clinton did in the general election in those states where, as we all know, she lost by razor-thin margins that allowed Trump to win the election. Is being a white man with a D next to your name all it takes to beat Trump in those key Midwestern regions? I suppose we'll find out.