In "The Ones We've Been Waiting For," Charlotte Alter profiles the crop of young leaders that herald real change 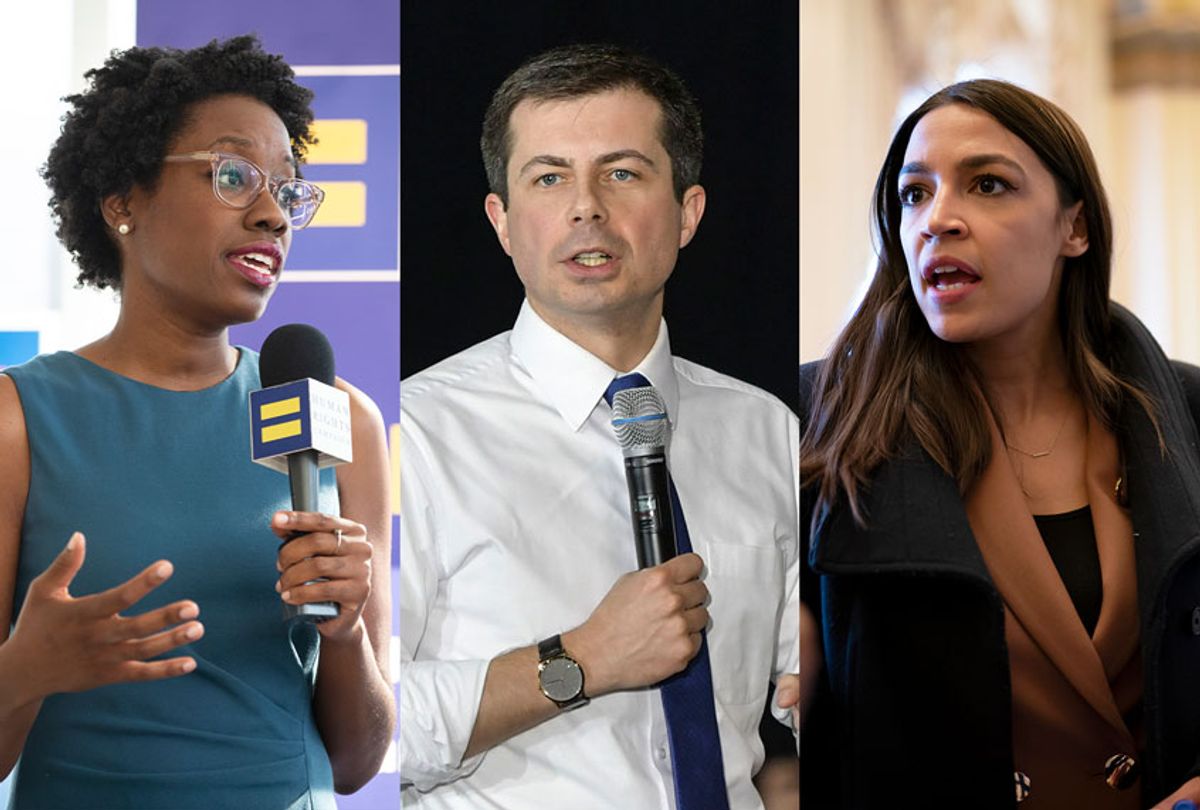 The already scatterbrained president of the United States is 73 years old. The two men left standing in the Democratic primary are closer in age to 80 than 70. A number of people have criticized the American government for being a gerontocracy, run by elderly people who are refusing to move out of the way for the younger generations.

Time correspondent Charlotte Alter takes a more optimistic view. While criticizing the grip that elderly people have on government, she also believes time itself will make it so that younger generations, especially the millennials, will get their chance in the sun. Her new book, "The Ones We've Been Waiting For: How a New Generation of Leaders Will Transform America" profiles a wide range of millennial leaders from across the political spectrum, from Democratic Reps. Alexandria Ocasio-Cortez and Lauren Underwood, to former South Bend Mayor and presidential candidate Pete Buttigieg, to Republican Rep. Dan Crenshaw. Alter demonstrates how this necessary generational shift will change the shape of what we consider politically possible in the U.S.

Alter spoke to Salon about her book and about the challenges that come with another election full of people that were born before the advent of color television. This interview has been edited for clarity and length.

Your book focuses on how the millennial generation — the only one so far to outnumber the boomers — are finally reaching for political power. What does this generational shift say about our political landscape?

Right now we're looking at a presidential race, where everybody is very old. The Democratic race has boiled down to two men that are so old that they aren't even boomers. Trump, of course, is in his seventies. Also, congressional leadership is old. Mitch McConnell is 78. Nancy Pelosi is 79. How is this altering their political views or framing their understanding of current politics?

Socialism is a good example of this. In some ways, Bernie Sanders is an exception to that, because he's somebody who identifies as a democratic socialist, despite the fact that he grew up during the Cold War when socialism had such a negative connotation in the United States. Sanders is a generational outlier when it comes to his attitudes about socialism.

But when you see, for example, this vote breakdown that we have been seeing in these primaries, of older voters gravitating towards Joe Biden and younger voters gravitating towards Bernie Sanders, a lot of that has to do with connotations around socialism. Older people who grew up during the Cold War, when they think of socialism, they think of gulags and bad shoes and waiting in line for a loaf of bread and going to a reeducation camp. They think of the Soviet Union and China and Cuba.

When millennials think of democratic socialism, they think of places in Northern Europe where there's free childcare and universal health care and easy access to higher education. Socialism for this group, has lost its sting.

The oldest millennials were eight or nine when the Berlin Wall fell. They don't  have the same context for that world.

Technology is another area where we're seeing a generational breakdown. Even though Sanders has a very online following, he himself is not a digitally savvy person.

Alexandria Ocasio-Cortez (a Democratic congresswoman from New York) is a digital native who really knows how to use technology.

Joe Biden, certainly, is not, like, firing up the tweets.

Joe Biden, Bernie Sanders and Donald Trump were all born before the bikini was invented. They were not vaccinated against polio when they were babies, because it wouldn't be invented. Some of them were almost in college when Barbie was invented. They just are from another time.

Sanders is somebody who happens to have ideas that are very much of this moment and that's why he's got so much traction with younger voters. But, one of the points of this book is that no matter who gets elected president in 2020, that same person is not going to be in charge 10 years from now. The older our leadership gets, the closer we are to a turnover.

I'm Generation X. We get completely forgotten in all of this. All Generation X candidates got run out of the race early. Why do you think this seems to happen?

I don't necessarily think that millennials will come before Generation X. It's very likely that, after the boomer president, we'll be looking at a Kamala Harris or a Cory Booker or a Ted Cruz. I'm not arguing that the next president will be a millennial. There is a deep bench of highly qualified Gen X politicians who are definitely ready to take the mantle. I'm not arguing that millennials should cut in line.

I also just think from a pure numbers perspective, part of the reason that Gen X gets overlooked is because there are just fewer of them. Millennials are like a reverberated baby boom, because they're the kids of the baby boomers.

Gen X absolutely is almost certainly more likely to take up the mantle before millennials will.

I'm just going to go ahead and say it right now: I think there will be a millennial president before there's a Gen X president.

The youngest person that you profile in this book is Alexandria Ocasio-Cortez, who was born in 1989. And she's called, by all sorts of people, an icon of her generation. How representative is she and in what way?

I always am wary of holding up one person as representative of an entire generation. Generations are not monolithic. That's part of the reason why I chose 10 people for this book. But she certainly is representative in a couple of ways.

This is the most diverse generation in history, until the generation that comes right after it. She is a young Latina woman. She is more demographically representative of the Bernie Sanders movement than Bernie Sanders himself is.

Her political positions on Medicare-for-All, a Green New Deal, student loan forgiveness are very much in line with where many — but not all — of her millennial peers are.

She's representative in her use of social media. I found her personal Facebook, from before she was in Congress, where she was posting all of these videos of her trips to Standing Rock and her trip to the Women's March. She had live-streamed these very important political moments for her, and she was not even running for Congress yet.

Watching those videos, you can really get a sense of how her political identity and her political presentation has evolved. But, it's also interesting how much it hasn't.

That's true for a lot of millennials. This is the first fully digitally native generation, which means that pretty much everybody with a social media account has grown up having a portion of their life that is for public consumption. A part of them is public facing, even if they're not a celebrity.

It seems kind of seamless for a lot of them.

Some of these millennials don't have to be media trained. They're more instantly camera ready than some of their predecessors. Social media has trained an entire generation how to pose for a camera, how to speak in public, how to package your ideas for public consumption, how do you ask people to do things, whether it's click a link or donate or come to this event.

Pete Buttigieg is somebody that you profile for this book. He positioned himself early on an icon of generational change, the opportunity to pass the baton, etc. And yet, most of his support was actually coming from older people. Meanwhile, Sanders, like you said, was pulling from younger people. What do you make of that?

Older people loved Pete Buttigieg, partly because he was an old person's idea of what a young person should be. When I talked to voters at many different candidates events, age, as an issue, was more important to older voters than for younger voters. In terms of not wanting a president who's that old. Right?

It became clear to me in my conversation with these voters that they understood the toll age takes on your mind and your body, and they were uncomfortable with somebody who was 10 or 15 years older than them taking on the most challenging job on the planet. It becomes more real to them, because they're experiencing it themselves. Younger voters don't know really what age means on a firsthand basis, and are more willing to just write it off.

Pete Buttigieg was for universal healthcare, even if he wasn't for the exact Medicare-for-All plan that Warren and Sanders were advocating. He wanted massive student loan forgiveness. He wanted massive government action on climate change. He wanted a massive government jobs program to help build infrastructure and care for seniors. Those are things that a moderate 30 years ago would never have been asking for. Even though he's not of the left, he is an example of how far the party has moved to the left.

I want to ask about the phrase "OK boomer." There was this pitched battle going around the internet, where people were defending this phrase on the grounds that there are now three generations of people living in the boomers' shadow. We deserve to have our fun. Meanwhile, boomers said it was prejudiced and cruel to say such a thing. I want to hear your opinion on this.

Railing against boomers doesn't really do anything. It's a waste of time. That's why I wrote a book that was about lifting up and examining millennial attitudes, rather than attacking boomers.

But I also think that there is real criticism there of some of the decisions that boomer politicians, in particular, have made over the course of the last 40 years, that have led us to some of the places we are, particularly on education and climate change.

The sensitivity to it, with boomers getting really upset about it? It's like, come on. I saw that somebody said that it was akin to a racial slur. That's totally ridiculous.

Age is something that will happen to everybody. I'm sure, in 30 or 40 years, our kids will be saying, "Okay, millennial." We'll just have to deal with it.

People making such a huge deal out of it is ridiculous. There are legitimate criticisms about the ways that boomers have run this country. But I also think that blaming individuals for decisions that elected officials, who happen to be their age, made is not particularly productive.