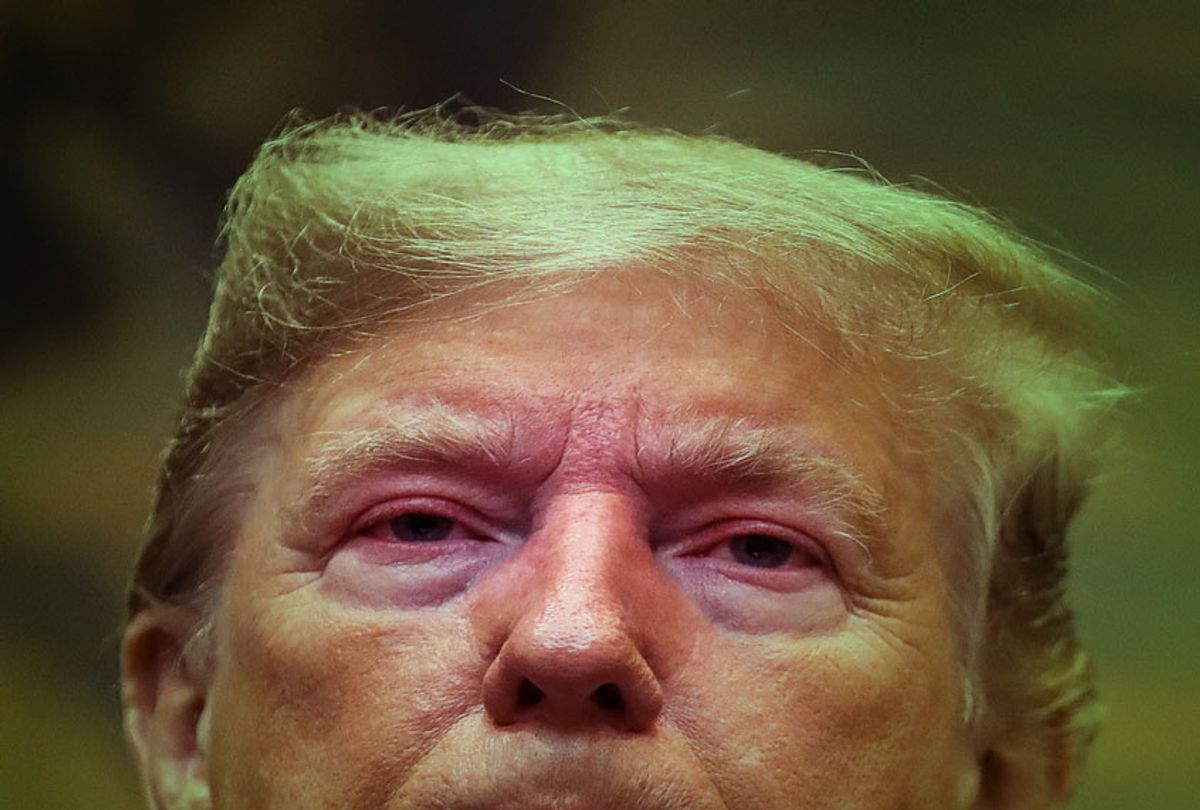 Two of the five city employees said they personally took bribes to lower the assessment on a Trump property; the other three said they had indirect knowledge of the payments.

The city employees were among 18 indicted in 2002 for taking bribes in exchange for lowering the valuations of properties, which in turn reduced the taxes owed for the buildings. All of the 18 eventually pleaded guilty in U.S. District Court in Manhattan except for one, who died before his case was resolved.

No building owners were charged, though the addresses of some of the properties involved became public. Trump Organization buildings were not on that list. No evidence has emerged that Donald Trump personally knew of or participated in the alleged bribery.

Asked to provide evidence or name the agencies that allegedly cleared the company, Garten did not provide additional details, saying, "I was referring to the different investigations conducted by the state and federal authorities at the time." (Here is the company's full statement.)

The moment that corrupt assessors told their co-conspirators that the Trump Organization had agreed to pay bribes was memorable, said Frank Valvo, a former city assessor who served a year and a half in prison for his role in the scheme.

The excitement was palpable in the office, Valvo recalled, as one of the assessors broached the news. "He says, 'We got Trump!'" Valvo recalled. "Wow. Holy Smokes."

Two former city employees, speaking on the condition of anonymity, told ProPublica and WNYC that they accepted money from middlemen representing the Trump Organization to lower assessments on 40 Wall St. after Trump took over the skyscraper in 1995.

The assessors' scandal burst into the news just months after the Sept. 11 attacks, revealing deep-seated corruption in the city's sprawling bureaucracy with potential fallout for some of Manhattan's wealthiest landholders. A joint city and federal investigation found that the assessors took more than $10 million in bribes over 35 years and changed the assessed value of at least 562 properties.

Valvo told ProPublica and WNYC, "I'm guilty of what I did. I'm not going to hide that." He said he's speaking because he's now 88, and he "wants the truth to come out" about the property owners. (To hear more from Valvo, listen to this week's episode of "Trump, Inc."

The two employees of the assessors office who said they personally received bribes for Trump properties said they met with middlemen, or bag men, for various property owners, who would hand them envelopes of cash. In exchange, the city employees treated the middleman's clients favorably when calculating the buildings' tax assessments. One such middleman, they said, was a tax consultant, Thomas McArdle, whose name later surfaced in connection with the bribery scheme.

One of the two assessors recalled receiving a list of about 20 properties from McArdle; 40 Wall St. was on it, he said.

Another said that at one meeting, he looked in the envelope and asked for more money. The middleman responded by telling him that Donald Trump thought the employee should be making the assessment changes for free.

Apart from the two employees who say they took bribes, and Valvo, a fourth former assessor said he could confirm that Trump Organization property was involved but declined to provide additional details. A fifth former assessor said he remembers Trump Organization properties being talked about in the office as among those whose assessments were lowered in exchange for bribes.

Another convicted assessor, Joe Iovino, said he "did not know of any Trump Properties" paying bribes. The remaining living assessors either declined to comment or did not respond to multiple requests for interviews.

The former Trump Organization employee said that when he worked at the company, Donald Trump arranged for an employee to meet with McArdle, the alleged middleman. (The extent of Trump's knowledge, if any, as to the ultimate purpose of this alleged meeting is unknown.)

During the subsequent alleged meeting, which Trump did not attend, McArdle received a check, and the employee passed along what the former employee said he knew to be "bogus information" to McArdle. The false information was intended to be passed on to the assessors, according to the former employee, to give them a pretext to lower the tax valuation for the Plaza Hotel, which the Trump Organization then owned.

McArdle, who was a cooperating witness in the bribery case, died in 2013 and was never charged. When the scandal erupted, according to the former Trump Organization employee, Trump expressed concern that he had signed checks payable to McArdle. His staff told him not to worry because executives of the Plaza had signed the checks, the employee said.

On Tuesday evening, the Trump Organization's Garten sent an email stating, "We reviewed our accounting records and we have no record of any payment ever being made to Tom McArdle."

ProPublica asked whether the records search included those from the Plaza Hotel, as well as whether the records indicated if the company had paid McArdle's firm rather than McArdle personally. Garten replied, "Regarding Trump Plaza, as I said, we have no records of any payments to Mr. McArdle."

Historical tax assessment data for the Plaza shows its valuation dropping noticeably during the Trump Organization's seven-year ownership. But it's hard to discern whether the changes in valuation were due to any assessors' scheme or changes in market conditions — or both. The Plaza's valuation dropped by about 40% over two years, for example, but that also coincided with the hotel's 1992 entry into bankruptcy. The assessments began rising again on its 1994 tax bill, when the hotel was back on the market. It sold in 1995.

In the case of 40 Wall St., the assessment also dropped. The decrease actually began before Trump took control of the building, which was then in distress, after he retroactively appealed the tax bill for what the Trump Organization said were fully legitimate reasons. The valuation stayed low, then climbed markedly beginning in 2000 — the same year the investigation into the bribery scheme began gaining traction.

The Trump Organization, in its statement for this article, attributed the Plaza's rise to fluctuations in the city's economy at the time. At 40 Wall St., the rise in valuations in the 2000s occurred after the building was renovated and signed a slew of new deep-pocketed tenants, which would be expected to drive up the assessment.

In 2007, Trump was questioned under oath about McArdle in an unrelated deposition for a lawsuit he filed against journalist Timothy O'Brien. Here's the full exchange between a lawyer for O'Brien and Trump, according to a transcript of the deposition:

Q. Ever heard the name McCardle? A. No. Who is McCardle? Q. Thomas McCardle. A. It sounds vaguely familiar, but I don't remember. Q. Former New York City tax assessor's office, then tax consultant? A. I don't know the name. Q. Was caught up in a scandal in the early 2000s regarding tax assessors? A. I think he is a man that represented many, many real estate people in New York. He represented some of the biggest real estate companies in New York. I don't know if he represented us or not, but I don't remember that. Q. Did you ever make any payments to Mr. McCardle? A. I don't even remember ever — I don't even know that name. I think I read the name because there was some kind of tax scandal going on, and he was involved with various real estate people. I don't know the name. I don't know that we ever used him. Q. Do you recall — A. He was a consultant of some kind. Q. Yeah. A. No, I don't remember ever having used him. But he was used by many major real estate companies in New York.

Prosecutors never pursued property owners over the bribes. One of the alleged architects of the scheme, an 85-year-old former assessor named Albert Schussler, who had become a middleman between assessors and owners, had a fatal stroke the night before he was scheduled to talk to prosecutors. His death hampered the case against owners, lawyers said.

"You'd love to follow the rainbow to the very end and get every person along the way who has been committing crimes, but unfortunately it's not possible," said Sharon McCarthy, the assistant U.S. attorney who led the prosecution of the case, in an interview with academic researchers in 2014. "The person who dealt directly with the property owners is Albert Schussler, and he passed away, so we lost the ability to go after anyone else."

McCarthy told ProPublica and WNYC that she could not discuss any part of the case that isn't in the public record.

After the devastation wrought in lower Manhattan by the 9/11 attack, fighting terrorism became the urgent focus. City Hall, worried about lower Manhattan, tried to prop up developers.

The federal and state statutes of limitations for bribery have expired, so no property owners face any risk of prosecution.

After the indictments, two Trump entities sued New York City, claiming that he had not paid bribes to lower assessments and thus the Trump World Tower near the United Nations was unfairly valued by assessors higher than it should have been.

When Trump filed the suit, he was quoted in The New York Times saying, "It is impossible for any one of those property owners who used Schussler not to have known what was going on."

The entity that owned the Trump World Tower separately sued the city seeking a tax break for creating affordable housing, and the city ultimately settled both suits together. Trump's company received a tax break worth more than $100 million. The 13-page agreement did not mention or address the merits of Trump's claims that the Trump World Tower suffered because of Trump's asserted unwillingness to pay any bribes.

The assessors each pleaded guilty and most of them served between one to three years in prison. The Finance Department said that they had deprived the city of $160 million in tax revenue over the four years prior to the indictments and millions more in the decades before that. They are still paying restitution.

"Trump, Inc." is a production of WNYC Studios and ProPublica. Support our work by visiting donate.propublica.org or by becoming a supporting member of WNYC. Subscribe here or wherever you get your podcasts.

Stay up to date with email updates about WNYC and ProPublica's investigations into the president's business practices.