As the global war on drugs fades away, the only people who benefited were drug traffickers 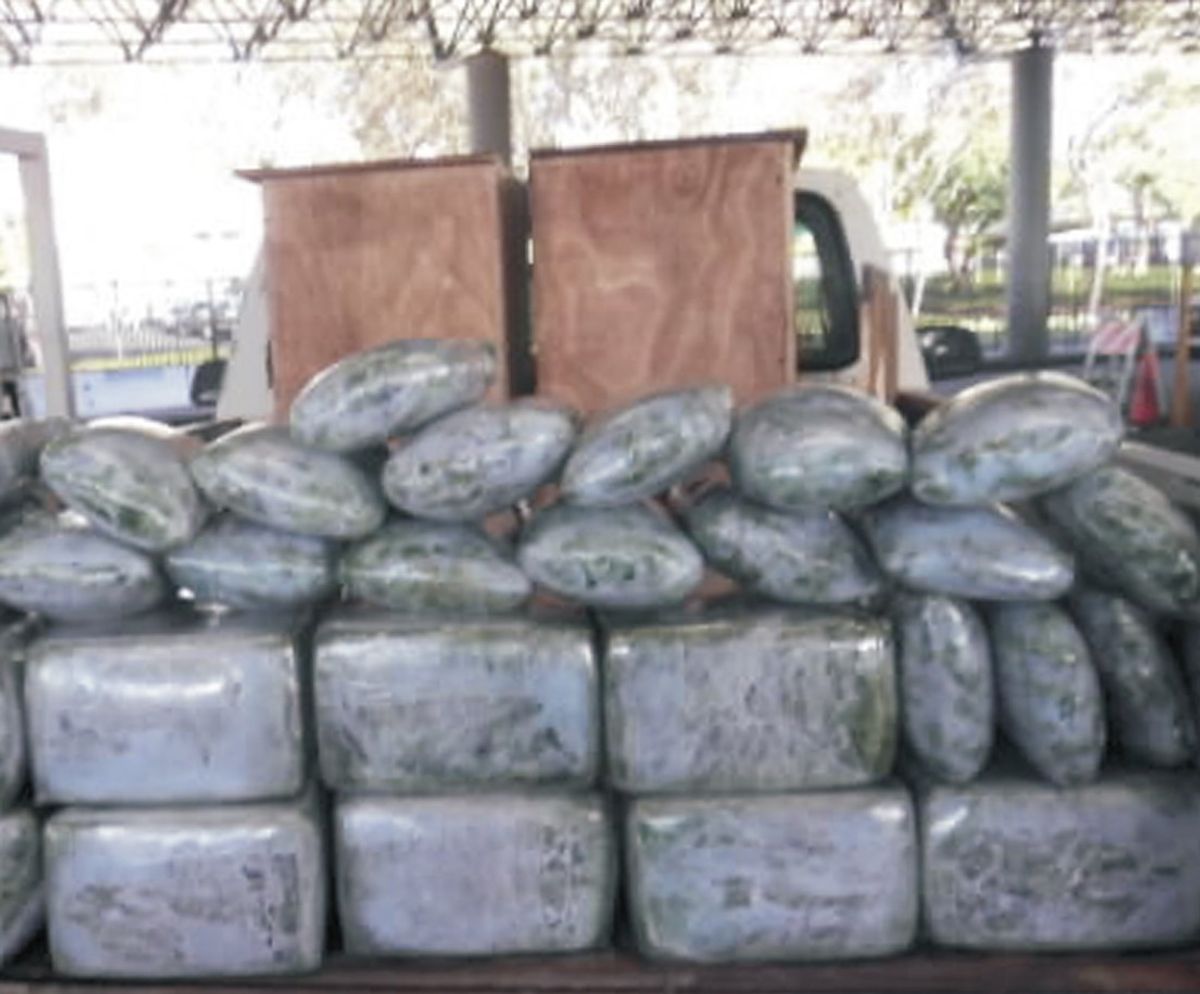 TO GO WITH NARCOTRAFICO AVISOS - This Sept. 7, 2010, photo provided by the U.S. Immigration and Customs Enforcement shows more than 110 kg of marijuana seized from a vehicle that attempted to enter the U.S. near San Diego. The driver of this vehicle had stated he responded to a newspaper ad allegedly placed by drug smugglers to recruit drivers to unwittingly take drugs across the border. Smugglers are advertising in Mexican newspapers for jobs as security guards, housecleaners and cashiers to recruit the unemployed and underemployed to drive drug-laden vehicles into the United States. Starting this week in April 2012, U.S. Immigration and Customs and Enforcement began warning job applicants in two Tijuana newspapers that they may be unwitting targets for drug cartels. (AP Photo/U.S. Immigration and Customs Enforcement) (Associated Press)
--

America shows signs of emerging from the century-long shadow of drug prohibition, with marijuana leading the way and a psychedelic decriminalization movement rapidly gaining steam. It also seems as if the mass incarceration fever driven by the war on drugs has finally broken, although tens if not hundreds of thousands remain behind bars on drug charges.

Thanks largely (but not entirely) to a century of American diplomatic pressure, the entire planet has been subsumed by our prohibitionist impulse. A series of United Nations conventions, the legal backbone of global drug prohibition, pushed by the U.S., have put the whole world on lockdown.

We here in the drug war homeland remain largely oblivious to the consequences of our drug policies overseas, whether it's murderous drug cartels in Mexico, murderous cops in the Philippines, barbarous forced drug treatment regimes in Russia and Southeast Asia, exemplary executions in China, or corrupted cops and politicians everywhere. But now, a couple of non-American journalists working independently have produced a pair of volumes that focus on the global drug war like a U.S. Customs X-ray peering deep inside a cargo container. Taken together, the results are illuminating, and the light they shed reveals some very disturbing facts.

"Dopeworld" author Niko Vorobyov and "Pills, Powder, and Smoke" author Antony Loewenstein both attempt the same feat — a global portrait of the war on drugs — and both reach the same conclusion—that drug prohibition benefits only drug traffickers, fearmongering politicians, and state security apparatuses—but are miles apart attitudinally and literarily. This makes for two very different, but complementary, books on the same topic.

Loewenstein, an Australian who previously authored "Disaster Capitalism and Profits of Doom," is — duh — a critic of capitalism who situates the global drug war within an American project of neo-imperial subjugation globally and control over minority populations domestically. His work is solid investigative reporting, leavened with the passion he feels for his subject.

In "Pills, Powder, and Smoke," he visits places that rarely make the news but are deeply and negatively impacted by the U.S.-led war on drugs, such as Honduras. Loewenstein opens that chapter with the murder of environmental activist Berta Caceres, which was not directly related to the drug war, but which illustrates the thuggish nature of the Honduran regime — a regime that emerged after a 2009 coup overthrew the leftist president, a coup justified by then-Secretary of State Hillary Clinton, and which has received millions in U.S. anti-drug assistance, mainly in the form of weapons and military equipment.

Honduras doesn't produce any drugs; it's only an accident of geography and the American war on drugs that we even mention the country in the context of global drug prohibition. Back in the 1980s, the administration of Bush the Elder cracked down on cocaine smuggling in the Caribbean, and as traffickers sought to evade that threat, Honduras was perfectly placed to act as a trampoline for cocaine shipments taking an alternative route through Mexico, which incidentally fueled the rise of today's deadly and uber-wealthy Mexican drug cartels.

The drug trade, combined with grinding poverty, huge income inequalities, and few opportunities, has helped turn Honduras into one of the deadliest places on earth, where the police and military kill with impunity, and so do the country's teeming criminal gangs. Loewenstein walks those mean streets — except for a few neighborhoods even his local fixers deem too dangerous — talking to activists, human rights workers, the family members of victims, community members, and local journalists to paint a chilling picture. (This is why Hondurans make up a large proportion of those human caravans streaming north to the U.S. border. But unlike Venezuela, where mass flight in the face of violence and economic collapse is routinely condemned as a failure of socialism, you rarely hear any commentators calling the Honduran exodus a failure of capitalism.)

He reexamines one of the DEA's most deadly recent incidents, where four poor, innocent Hondurans were killed by Honduran troops working under DEA supervision in a raid whose parameters were covered up for years by the agency. Loewenstein engaged in extended communication with the DEA agent in charge, as well as with survivors and family members of those killed. Those people report they have never received an apology, not to mention compensation, from the Honduran military — or from the United States.

While the Honduran military fights the drug war with U.S. dollars, Loewenstein shows it and other organs of the Honduran government are also deeply implicated in managing the drug traffic. And news headlines bring his story up to date: Just this month, U.S. prosecutors in New York accused the current, rightist president of Honduras, Juan Orlando Hernández, of meeting with and taking a bribe from a drug trafficker. This comes after his brother, former Honduran Senator Juan Antonio Hernández, was convicted of running tons of cocaine into the United States in a trial that laid bare the bribery, corruption, and complicity of high-level Hondurans in the drug trade, including the president.

Loewenstein also takes us to Guinea-Bissau, a West African country where 70 percent of the population subsists on less than $2 a day and whose biggest export is cashews. Or at least it was cashews. Since the early years of this century, the country has emerged as a leading destination for South American cocaine, which is then re-exported to the insatiable European market.

Plagued by decades of military coups and political instability, the country has never developed, and an Atlantic shoreline suited for mass tourism now serves mainly as a convenient destination for boatloads and planeloads of cocaine. Loewenstein visits hotels whose only clients are drug traffickers and remote fishing villages where the trade is an open secret and a source of jobs. He talks with security officials who frankly admit they have almost no resources to combat the trade, and he traces the route onward to Europe, sometimes carried by Islamic militants.

He also tells the tale of one exemplary drug bust carried out by a DEA SWAT team arguably in Guinean territorial waters that snapped up the country's former Navy minister. The DEA said he was involved in a "narco-terrorist" plot to handle cocaine shipments for Colombia's leftist FARC guerillas, who were designated as "terrorists" by the administration of Bush the Junior in a politically convenient melding of the wars on drugs and terror.

It turns out, though, there were no coke loads, and there was no FARC; there was only a DEA sting operation, with the conspiracy created out of whole cloth. While the case made for some nice headlines and showed the U.S. hard at work fighting drugs, it had no demonstrable impact on the use of West Africa as a cocaine conduit, and it raised serious questions about the degree to which the U.S. can impose its drug war anywhere it chooses.

Loewenstein also writes about Australia, England, and the United States, in each case setting the historical and political context, talking to all kinds of people, and laying bare the hideous cruelties of drug policies that exert their most terrible tolls on the poor and racial minorities. But he also sees glimmers of hope in things such as the movement toward marijuana legalization here and the spread of harm reduction measures in England and Australia.

Loewenstein has made a hardheaded but openhearted contribution to our understanding of the multifaceted malevolence of the never-ending war on drugs. And I didn't even mention his chapter on the Philippines. It's in there, it's as gruesome as you might expect, and it's very chilling reading.

Vorobyov, on the other hand, was born in Russia and emigrated to England as a child. He reached adulthood as a recreational drug user and seller — until he was arrested on the London Underground and got a two-year sentence for carrying enough Ecstasy to merit a charge of possession with intent to distribute. After that interval, which he says inspired him to write his book, he got his university degree and moved back to Russia, where he picked up a gig at Russia Today before turning his talents to "Dopeworld."

"Dopeworld" is not staid journalism. Instead, it is a twitchy mish-mash, jumping from topic to topic and continent to continent with the flip of a page, tracing the history of alcohol prohibition in the U.S. at one turn, chatting up Japanese drug gangsters at the next, and getting hammered by ayahuasca in yet another. Vorobyov himself describes Dopeworld as "true crime, gonzo, social, historical memoir meets fucked up travel book."

Indeed. He relates his college-boy drug-dealing career with considerable panache. He parties with nihilistic middle-class young people and an opium-smoking cop in Tehran, he cops $7 grams of cocaine in Colombia and tours Pablo Escobar's house with the dead kingpin's brother as a tour guide, he has dinner with Joaquin "El Chapo" Guzman's family in Mexico's Sinaloa state and pronounces them nice people ("really chill"), and he meets up with a vigilante killer in Manila.

Vorobyov openly says the unsayable when it comes to writing about the drug war and drug prohibition: Drugs can be fun! While Loewenstein is pretty much all about the victims, Vorobyov inhabits the global drug culture. You know: "Dopeworld." Loewenstein would bemoan the utter futility of a record-breaking seizure of a 12-ton load of cocaine; Vorobyov laments, "that's 12 tons of cocaine that will never be snorted."

Vorobyov is entertaining and sometimes laugh-out-loud funny, and he brings a former dope dealer's perspective to bear. He's brash and breezy, but like Loewenstein, he's done his homework as well as his journalistic fieldwork, and the result is fascinating. To begin to understand what the war on drugs has done to people and countries around the planet, this pair of books makes an essential introduction. And two gripping reads.