I'm an American living in Italy as the coronavirus took hold. This is what it's like for me

I came to Italy to create and tour a new theatre performance with a group. That's all on hold for now 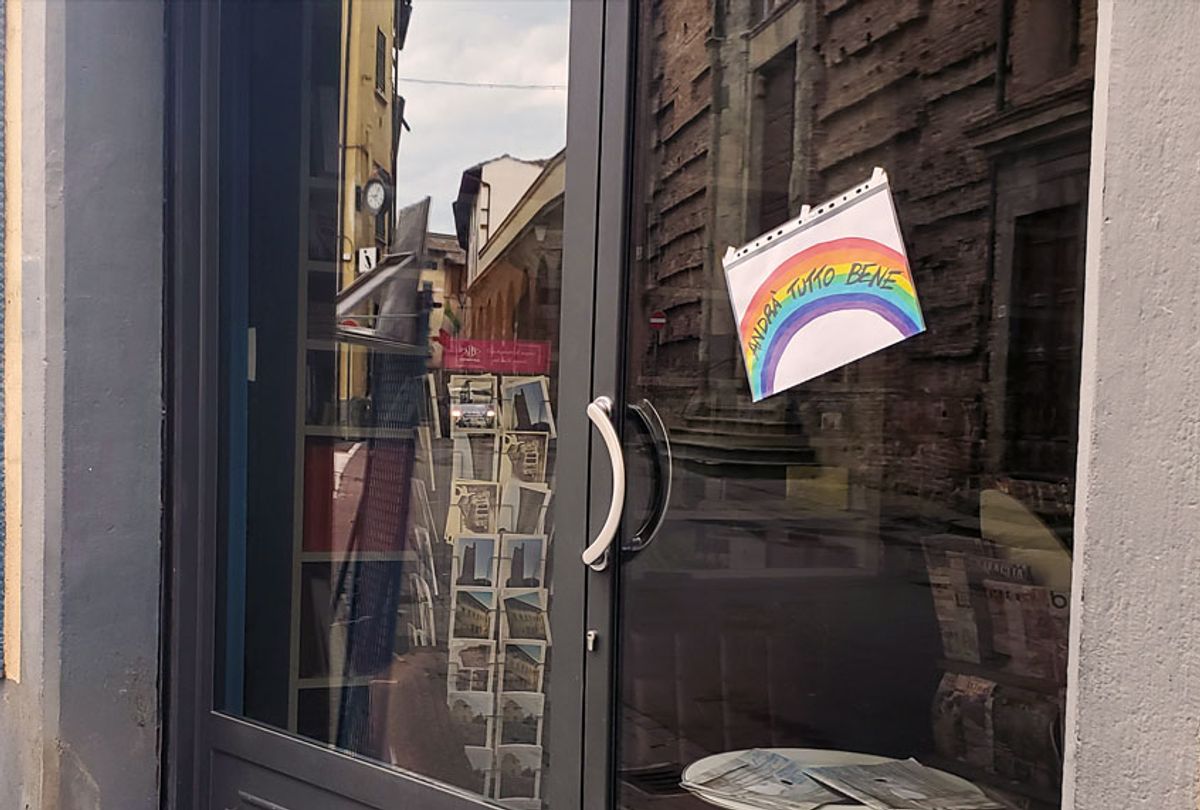 It's 9 p.m. I poke my head out of my apartment door and scan the street. Empty. A misty rain is blanketing the city. I exit quickly and scurry three doors down to where my friends are staying. I have a cup of fresh tea— cinnamon, orange and ginger — and in my back pocket, a slip of paper declaring me as an associate of the Atelier di Matteo Destro, an international theatre studio, which explains my presence in San Miniato in case I get stopped by the Carabinieri (police). And they could stop me — I'm breaking the 6 p.m. government curfew.

I hit the buzzer and hope no one drives by as I wait for Emily (not her real name) or Solene to answer the door. Inside, I know Emily will be packing. In the morning she will travel to Milan, where she will catch a flight to London and then home to San Francisco. Our group is gathering to say goodbye to her. Emily is nervous about her trip — will she get stuck in Milan? Will she be quarantined somewhere else along the way? On the other end her anxious partner, whose small business is being hit hard by the pandemic, waits. They want to be together. I don't blame them. It's an awful time to be alone. Solene opens the door and I jump inside.

This all seems a bit ridiculous. Overwrought and dramatic. And yet out on San Miniato's narrow streets, against the backdrop of these centuries-old buildings, it's easy to imagine myself in a scene from WWII, braving the streets during blackouts and bombings.

In normal circumstances we might gather at one of the local cafés, but the bars are all shuttered. This quaint village, halfway between Pisa and Florence, is currently a ghost town. The town's one food store — more bodega than grocery — is allowed to stay open, as is the hospital. Otherwise all businesses are closed. Rules dictate that people keep at least one meter of distance between them.

Our group of seven theatre-makers, brought to San Miniato by the Atelier, is restless. And bored. All of our plans have changed; mostly, there are no plans. No one is sure when to travel home, or if they can. Our plans — to take a show we'd spent four weeks devising out on tour — were quickly scuttled as government restriction and travel bans took hold of the country. At least now we know what the next few weeks hold: a lot of nothing.

At first, every day was a different story. On February 29, we held our first performance in Pontasieve, a section of Florence. Then our Tourino show the following weekend was cancelled. We still thought our performances in Sicily would move forward, as most of the disruption seemed isolated to the north of the country. But as the hours passed and the virus spread, concern grew. Then Sicily shut down.

We regrouped, updating our show posters and postcards, adding more dates here in San Miniato. We performed twice in a local school. Then the schools closed. On March 7, after obtaining special permission from the mayor, we were allowed to stage a public performance in our workspace. Forty-five people attended, sitting in chairs placed a meter apart. Afterwards we went to Centrali, our favorite local watering hole. It was packed — not a seat or table available. We stood shoulder to shoulder, chatting happily. The next day, all shows were cancelled. Over the next few days, bars and businesses, already operating under the one-meter rule, were ordered to close.

So here I am. Although I had originally been scheduled to depart for home via Florence on April 8, I moved up my return to the U.S. in light of the cancelations and closures and bought a plane ticket from Rome to home — well, Nashville, as close to home as I could afford — to depart March 15.  But after considering my options, I've decided to stay in San Miniato for now. Partly because I'm afraid to travel — I'm worried about moving through airports and anywhere where numerous people congregate. I'm also worried about traveling into an uncertain climate in Nashville, not knowing if I'll be able to travel the last three hours home.

I feel fairly secure in my apartment in San Miniato. I am alone – my roommate, a French national named Roxane, flew to Belgium a few days ago and hasn't been able to come back. (She's working on her own project, a one-woman show with the rather timely theme of Hell.) She had planned a side trip to visit friends in Belgium while we were on the Sicily leg of our tour. She opted to follow through on that trip, and now can't return to Italy. I'm pretty sure I'll be able to stay here until April 8 — maybe even into May, depending on how the situation unfolds globally over the next few days.

So now it's a matter of keeping myself busy. How do I use this time? Even in the best of circumstances I am an anxious person, susceptible to catastrophic thinking. I am also recently divorced, without health insurance, self-employed. But I can't focus on that right now.

Instead I focus on what I'm grateful for: The fact that at I have some contacts here that I call friends. That the TV in my room has one English-speaking channel. That I have access to healthy food. Support from friends and family at home. Grateful that I can go outside for a walk — alone, though, no walking in couples. I'm grateful that I have enough money to manage for a few months. That I don't have children I need to worry about feeding. That I am in a place that hasn't had — at this time — any cases of the virus. I am thankful for a good bed, a cup of hot tea and a general feeling of safety, if not security.

I will not succumb to fear and panic. Instead, I'm avoiding social media when possible — it's a double-edged sword best used wisely. I'm meditating; recently I discovered the Serena Healthy Mind & Body podcast, and it's been a gift over the past several weeks. I have been able to access that quiet place within, the one that's underneath the anxiety — the place that feels grounded and solid, but which is often overshadowed by the chaos. I'm being mindful of my thoughts, which quickly turn to gloom and doom. When that happens, I say out loud, "enough —for the next ten minutes, I free myself from suffering."

Moving helps, too: yoga, playing a game, putting on music and dancing around the kitchen. Don't know what to do next? Do the dishes. Mop the floor. Fold your laundry. Clean your room.

I remind myself it's OK to cry. In the midst of keeping it all together, everyone needs a release. Sometimes a few tears can help. I give myself 30 seconds of acknowledging that I'm having a hard time, that I am hurt. When I acknowledge it and free it, it releases some of the pressure.

I also imagine that there are two of me — the hurt, anxious, scared little girl who needs comforting, and the adult kickass me who can handle anything. I close my eyes and imagine kickass me taking anxious me by the hand and saying, "It's OK. I got this."

It's a good time to remind ourselves we are not alone, even if the streets are empty and our normal work and social practices have been disrupted. We are not unique in our suffering. Lots of people have a hard time handling disruption, fear, and uncertainty. This makes me feel better; it connects me to others. It assures me that I'm not broken, I am human. Just as I am trying to keep it all together, so is everyone else.

Above all, it's the right time to reach out. It's been hard for me to pull back the curtain on my messiness to friends who are used to seeing me as confident and strong. I worry I'll overwhelm them with my anxiety and neediness. And you know, some haven't been able to handle it — and that's OK. But there are others who get it, who have been through their own messiness, who understand and can handle when I admit to feeling overwhelmed and like a complete fuck up. That kind of friendship is a gift we can all extend to each other, even if we can't or shouldn't do it face-to-face for the near future.

Kate B is an actor, public speaking coach and entrepreneur (and now a published writer!) based in Louisville, Kentucky. She thinks the universe is daring her to put her money where her mouth is and go ahead and make that move to Europe. Connect on Instagram @katebvocal.