Bernie was right to stay in for the debate — but after Tuesday, he's likely done

By staying in, Sanders forced Biden to commit to progressive goals on climate, health care and even a female veep 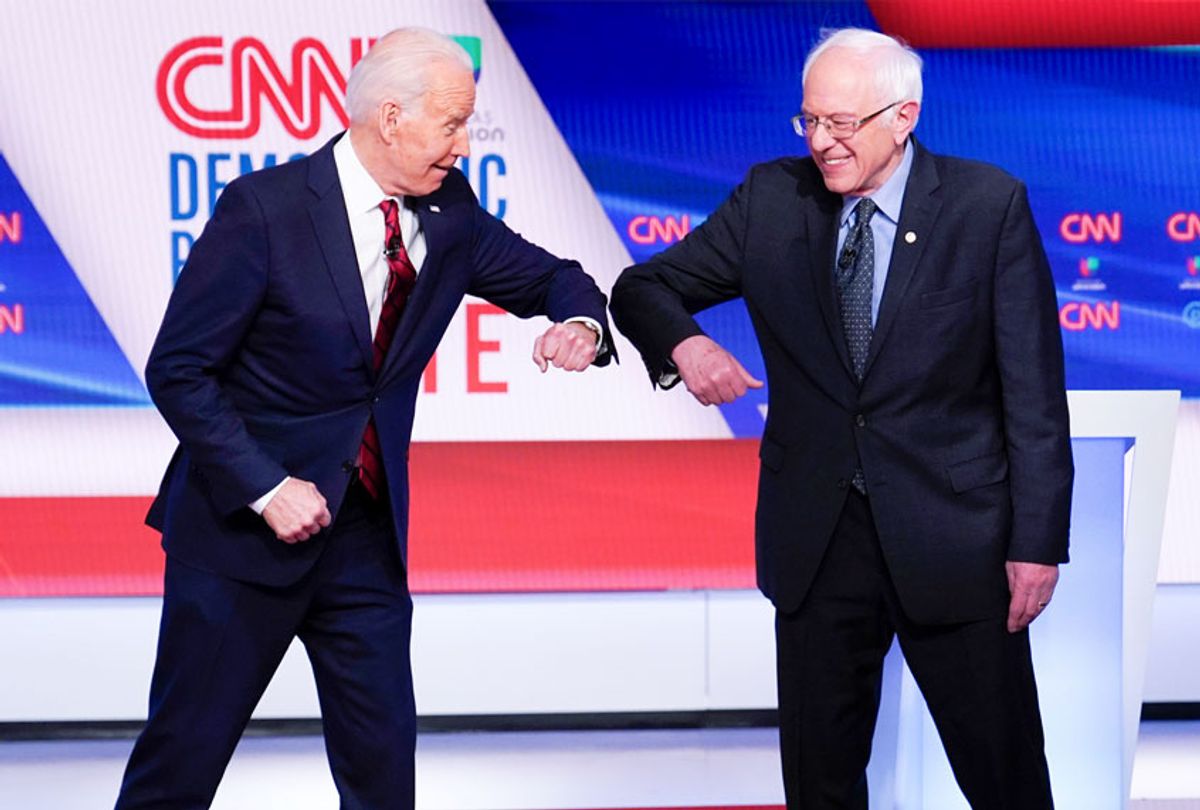 When Sen. Bernie Sanders indicated last week that he was staying in the Democratic presidential primary, even though former Vice President Joe Biden has a delegate lead that is almost certainly insurmountable, lots of people got angry with him.

"The Best Thing Bernie Sanders Can Do Is Drop Out," read a headline for David Frum's piece at the Atlantic.

Jennifer Rubin of the Washington Post argued Friday that Sanders "might want to drop out before Tuesday's contests to avoid a third consecutive week of humiliation."

"Let's shut this puppy down, and let's move on and worry about November," Democratic strategist turned cable news sideshow James Carville snarked on MSNBC after Sanders saw another round of losses last week.

These folks tend to lean conservative, however. Speaker Nancy Pelosi — who, despite the vitriol she gets on social media, is among the more progressive members of the House — publicly declared herself a "grassroots person" and said, "I don't think Bernie Sanders should get out of the race."

In a press conference last week, Sanders admitted things looked bad for him in electoral terms, but insisted that "our campaign has won the ideological debate" and said, "I very much look forward to the debate". He then laid out the questions he wanted to ask Biden before running down a list of concerns, especially on health care and the environment.

Nation writer (and former Salon editor) Joan Walsh responded to Sanders by saying, "it's nice he's giving Biden a takehome exam for the debate on Sunday."

Indeed, Sanders' most realistic hope, going into Sunday's debate in a Washington studio (it was originally slated as a public forum in Phoenix), was to force Biden into a series of promises on progressive agenda items, commitments that can later be used to hold Biden's feet to the fire during the general election campaign and, then (we must hope) when he's president.

On that front, Sanders scored a remarkable success simply by staying in the race. Biden committed to a version of the Green New Deal (though not one as bold as Sanders' plan), noting that his own state of Delaware "is three feet above sea level". Biden continued to criticize Medicare for All, but committed to a solution for universal health care that involves a public option. Biden even committed to having a female running mate, the kind of headline-grabbing promise that he can't back away from — and he likely wouldn't have made if Sanders had dropped out.

Perhaps the biggest coup for progressives, however, came earlier in the day, when Biden's campaign announced that he now supports making public colleges and universities tuition-free for students whose families make less than $125,000 a year. Perhaps more interestingly, Biden also announced that he supports Sen. Elizabeth Warren's plan to undo a 2005 bankruptcy bill that allowed the predatory banking industry to rake in huge profits while leaving ordinary Americans swimming in debt.

Warren, who was still a law professor at that time, fought against this bankruptcy bill for a decade. Most of the Democrats in Congress sided with Warren. But one shining exception was Biden, who not only voted for the bill, but helped draft much of it. (His argument is that he moderated what would have been a much worse Republican bill.) Warren doggedly targeted Biden for criticism of that bill and spent much of the campaign trail highlighting his support for it.

For Biden to come around to Warren's point of view is a huge concession, and a demonstration that his progressive opponents have successfully extracted major leftward commitments from him. Warren, whose endorsement is highly coveted after her withdrawal from the race, might well have been able to move Biden on this front all on her own. But it definitely didn't hurt that Sanders is still in the race, putting pressure on Biden from the left.

Still, the debate itself highlighted why this Tuesday's primaries in four important states — Arizona, Florida, Illinois and Ohio — will probably be the end of the line for Bernie's campaign. Although he may get a decent delegate share in Arizona and Illinois, he's unlikely to win any of those states. His presence of in the race has pushed Biden to the left in important ways, but after Sunday's pledges and another big delegate haul, Sanders' leverage on the former veep will be pretty much gone. More to the point, Sanders kept getting in his own way on Sunday night when it came to getting Biden on the record with future promises, because Sanders kept wanting to talk about the past.

At one point, Sanders rattled off a list of past votes he and Biden both made, where history shows Biden was wrong on and Sanders believes he was right: The Defense of Marriage Act, the Iraq war authorization, various trade agreements. On the first two, there's no doubt that most Democratic voters will agree with Sanders (it's unclear whether voters really have firm opinions on trade policy). But I'm not sure what it buys Sanders to keep harping on these past mistakes. Sanders admitted that Biden had shifted in the right direction and wasn't willing to argue that Biden was untrustworthy or backsliding on his current positions, so this bickering about the past seemed indulgent and petty.

Biden seemed to get this, arguing, "We can argue about the past or the future," and pointing out that Sanders had a less than perfect record on issues like gun control or his past statements about Fidel Castro's regime in Cuba.

In light of the coronavirus pandemic and the economic shocks, this backward-looking discussion felt particularly grim and beside the point. I don't love Biden's past record, but the time has now come and gone past for Democrats to consider or nominate a better candidate with a past that could have withstood such scrutiny. Biden has already committed to more progressive policies going forward, so the only remaining value in such bickering about the past is to help Donald Trump win in November by convincing progressive voters to stay home.

Sanders has done all he can in this race to pull the eventual nominee to the left. If he does poorly in Tuesday's primaries, as is more than likely, it's time for him to bow out gracefully and work on helping unify the party behind Biden. This is doubly true now that the coronavirus epidemic has hampered any ability to hold campaign rallies or engage in face-to-face campaigning that puts people's health at risk. For a candidate who ran on a commitment to national health care, prioritizing people's health in a national emergency is the right move.

During the debate Sunday, Biden complained about Sanders, "I was trying to give him credit for some things — he won't even take the credit."

It's almost time for Sanders to take credit for what he's done to shift America and the Democratic Party and leave the 2020 race. In a country that wasn't in crisis, a drawn-out primary run with virtually no hope of winning might be a justifiable gesture of defiance. But right now, it's a luxury we cannot afford.