In "Pretty Bitches," women confront the words used to put them in their place

"When pretty is 87% of your identity, it cannibalizes your freedom," essay editor Lizzie Skurnick tells Salon 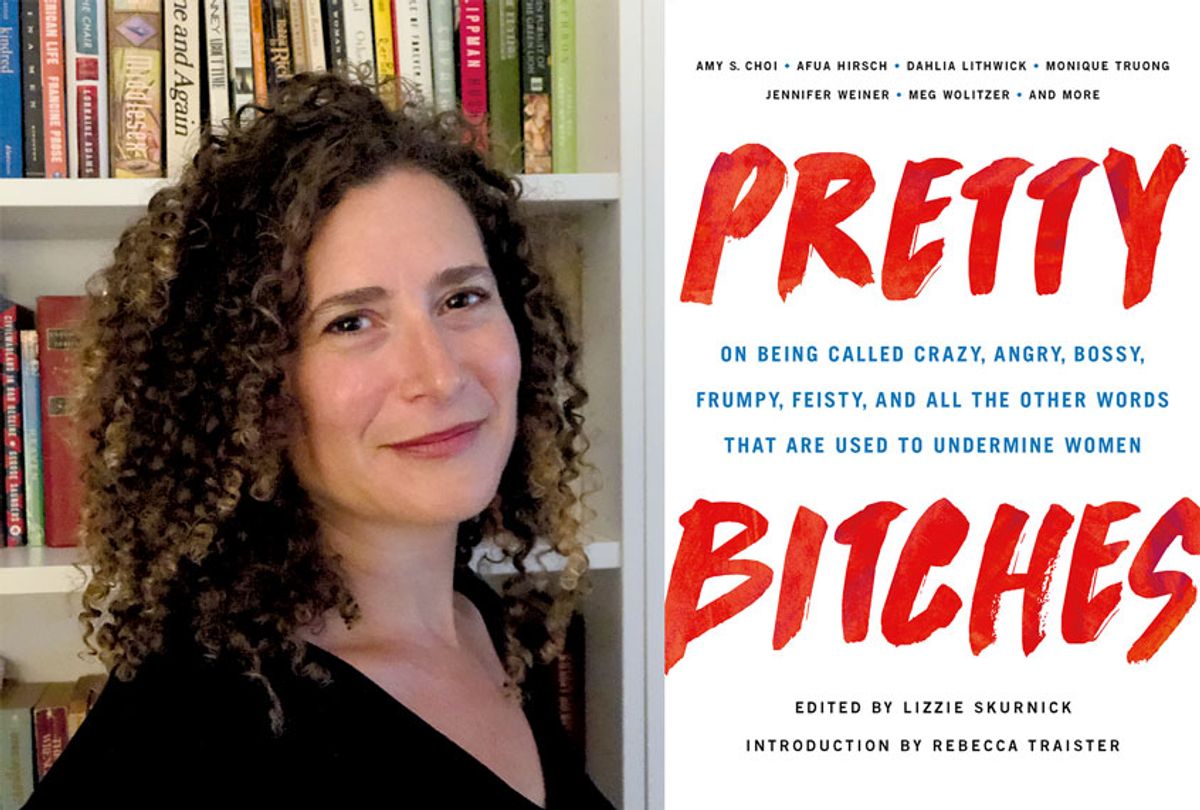 The past couple of decades have firmly laid waste to the idea that only sticks and stones can cause harm. Even as conservatives rail against the supposed evils of "political correctness," they only underline the idea that words have power, or else they would be less inclined to fight to hang onto the power that the use of slurs cause.

In the new essay collection organized by Lizzie Skurnick, "Pretty Bitches: On Being Called Crazy, Angry, Bossy, Frumpy, Feisty, and All the Other Words That Are Used to Undermine Women," various writers look at these words and the impact they have on women. Skurnick spoke with Salon about the book and what it means to be a pretty bitch.

Well, probably for the same reason that people sort of choose the gender binary. It's the first way we describe women: Pretty, not pretty. It's not that pretty is an insult, but that when pretty is 87% of your identity, it cannibalizes your freedom.

A lot of these words, even the ones that are seemingly neutral or even compliments, carry so much weight that they destroy everything else.

What kind of reaction have you been getting to this title?

People love it. Well, women my age, which is 46, in my cohort. You know the conversation's going to be intense. People appreciate it for that. They know this is a book that's really all-in on the question of how important words are.

It's the binary of "pretty" and "bitches." It's happened to me. Someone on the street says, "Oh, you're pretty," and I don't respond. They'll go, "Whatever, bitch." That is a not infrequent occurrence in many women's lives.

Speaking of unpleasant experiences, recently Chris Matthews retired from MSNBC after a journalist, Laura Bassett, wrote a piece about him harping on her looks in the makeup room and saying things like, "Why haven't I fallen in love with you yet?" She was tweeting out a bunch of the angry responses that she got from people saying she's the "purity police," that he was just flirting, women need to learn to react, will act. What would you say to those folks?

Let's say someone says you're filled with curry, or you're like the color tangerine, something that has no meaning. Of course, I'm not going to be insulted. I might wonder what the fuck they were talking about.

But the problem is we know how much our looks are connected to our promotion. We can look with our eyes and see. There's not a lot of ugly journalists, especially not at a young age, who are female. But being in that position will also get you sexually harassed by Matt Lauer.

I remember in the Anita Hill testimony — I was re-watching it recently — and one of those old f***-faced congressman was like, "Well, I mean if there's just a man talking about women's breasts, which men do all the time."

I'm just sitting there thinking that men are really invested in being able to do what they want without even bothering to consider other people. My breasts are not the topic at hand in the workplace. I didn't walk into the board room for you to look at my tits.

Shifting away from sexual harassment, another example is one of the most infamous moments in 2016 when Chuck Todd said that Hillary Clinton was somehow "over-prepared" for a debate. You have some essays in this book that are about similar words that are used against women such as "disciplined," "professional" or "ambitious." They all seem like good things, but they're often used as insults against women, like Chuck Todd did with "overprepared." What's going on there?

Men don't like it when we are equal to them. When it's clear that we are equal — or have surpassed them — they talk about it as if we've gone over the top, it's too much, dial it down.

If you go back to my mother's generation, what used to happen, you had a job in a heavily male industry, they would say, "Well we gave one woman a job, so we can't also hire you." It's just this feeling that they deserve the seat and we don't. So anything we take is really on their sufferance.

Hillary Clinton told that story about taking a law school test and going into the testing room and the men there were furious and said, "You're just taking our seats."

I look back on the boss who felt me up. He was literally not allowing me to do my job. When someone felt me up at my graduation party, it ruined my whole party. I probably remember every time some gross guy felt me up.

We're not over-sensitive. They are stealing an experience from us. It ruins the day.

One of the essays in here is titled "Victim." It's one of the more contentious words. Some people think the word "victim" is a precious commodity, and should only be doled out in the rarest of circumstances. Meanwhile, actual victims often hate that word and are drawn to words like "survivor," even though not all of us survive. So what makes this word so contentious? Why is this such a loaded term?

We always assign women blame for just going about their day, wanting a law degree or sitting in a green room or watching their three kids or doing anything that has nothing to do with anything else. If you have been harmed by a man, as a woman, then it can't be an experience that you get to legislate. Everybody else has to own it too. Just like when you're pregnant, everybody else gets to own that experience.

What was so wonderful about Kate's essay: It really talked about the kaleidoscope effect of thinking about what happened to you. You're not even allowed to find a word that makes sense to you. You have to think about all the ways people respond with what you choose to call your experience being harmed by a man. Everybody has to have their own take on what men are allowed to do to women.

Your essay in this book is about the word "zaftig." I learned a lot from the essay. I didn't know that it was a Yiddish word with a specific meaning.

Isn't it fun to learn that? That's partly why I wrote it. I was like, "I'm feeling crazy about people misusing this word."

It's not bad, if you use it in the way it's really meant, which is like looking at someone's ass and wanting to pinch it.

My grandma thought I was strong, but I also couldn't take the compliment because of how that word is used in our society. And I wish she were alive so I could ask her now.

We define people so much like should lose five pounds, should gain five pounds. But my grandmother seemed to really have a different understanding of how my body should look and why it looks good. I wish it's one that we could all have, because I think we would feel better.

Sometimes I feel like the people who are the most in drag in our society are straight white men, and it's the most boring drag. And I feel like there is an extent to which I think some of them would like to not do it. I think, because of the cage they're in, that that gives them no empathy for the cage they put us in. And if they could see a little bit more how in drag they were, and how restrained they were, I think they would stop feeling so threatened by us, or at least I hope they would.