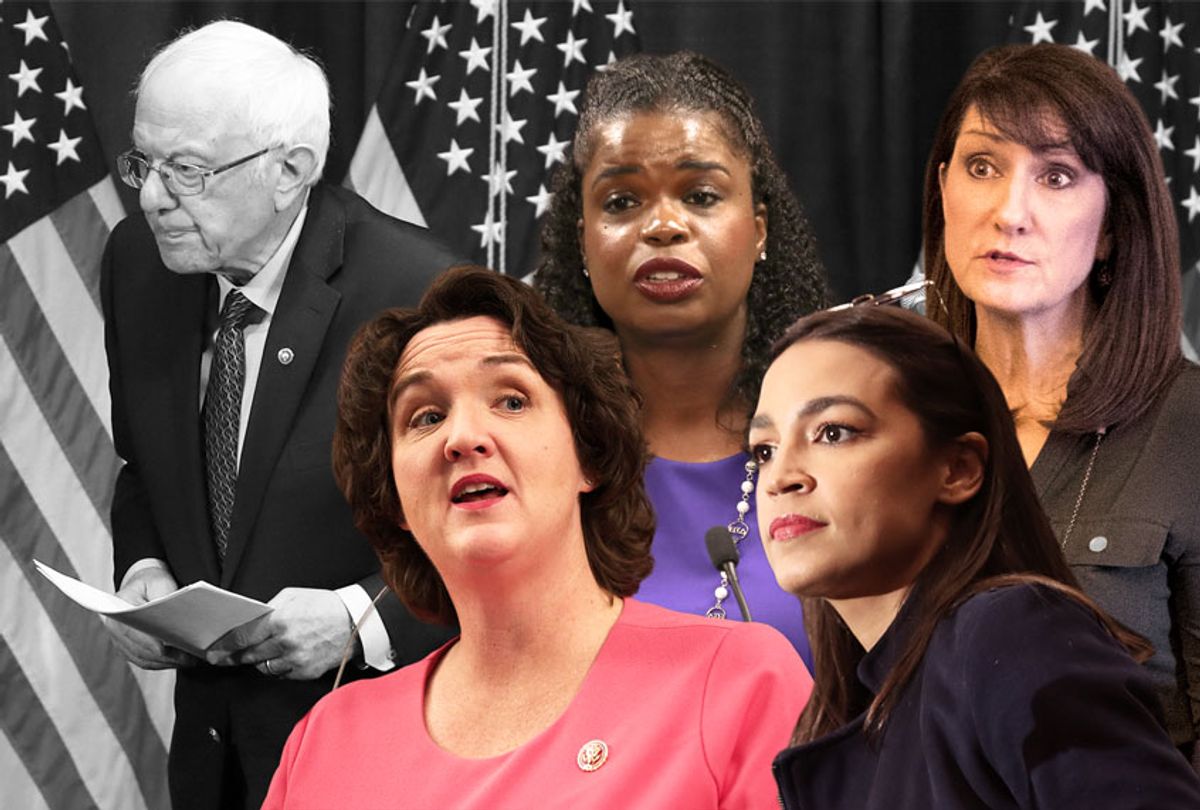 Tuesday night was another round of major losses in the Democratic presidential primary for Sen. Bernie Sanders. Ohio may have delayed its primary, but in the states that still had voting — Florida, Illinois and Arizona — Sanders fell 8-12 percentage points below what he got in the 2016 primary race, despite having four years steadily building his national presence. Former Vice President Joe Biden is now so far ahead in the delegate count so far that for all intents and purposes, it's impossible for Sanders to catch up.

The Sanders ceiling is real. But that doesn't mean that there's no hope for the progressive movement going forward. On the contrary, on the same Tuesday night that likely ended the 2020 Sanders campaign there was a major progressive victory in the Chicago suburbs, as Marie Newman finally ousted Rep. Dan Lipinski, a conservative Democrat who inherited the seat from his father, Bill Lipinski, and has been in the family since 1982.

For years, Sanders and his supporters have asserted that his candidacy is about building a movement, and is much more than cult of personality around Bernie himself. Sanders has even gone so far as to adopt the slogan, "Not Me. Us," complete with ads emphasizing the belief that this is a collective push towards a progressive future.

In the face of his evident primary defeat, therefore, the best thing Sanders can do to prove that this is about "us" and not "me" is to step back as the leader and let others come forward, younger figures who may be better positioned than Sanders to expand the progressive base past that ceiling Sanders keeps hitting. Bernie can do one last, big thing for the progressive movement to which he's dedicated his life in politics:  Let others take over, especially younger women, as we move into the third decade of the 21st century.

Newman's victory over a powerful and well-funded incumbent advantage shows the path forward for progressives trying to pull the Democratic Party to the left. It's a progressivism that puts feminism and racial justice at the center of its political vision, instead of dismissing them with the phrase "identity politics."

Newman is, to be quite clear, extremely progressive, and was endorsed by Sanders himself. She supports Medicare for All, a $15 an hour minimum wage, the Green New Deal, robust anti-corruption legislation, and the 2% wealth tax first concocted by Sen. Elizabeth Warren of Massachusetts, and then embraced by Sanders himself.

But Newman's victory over Lipinski, who voted against the Affordable Care Act, wasn't just the result of support from Sanders and other progressive mainstays like Rep. Alexandria Ocasio-Cortez of New York or the Justice Democrats. Newman also had the support of feminist groups that are sometimes dismissed by the Sanders left as the "Democratic establishment," including NARAL, Planned Parenthood and Emily's List. Even though Lipinski was backed by pro-incumbent groups like the DCCC, the help of these feminist organizations helped push Newman over the top.

Newman obtained this support by being proudly pro-choice, while Lipinski was anti-choice. But the truth is that Newman's entire political history centers around causes with enormous appeal to the Women's March set that is sometimes treated with contempt by the pro-Sanders "dirtbag left." Newman got her start in politics by starting an anti-bullying organization and spent time as a spokeswoman for Illinois Moms Demand Action. She is every inch the "resistance mom" that gets mocked so heartily by the Chapo Trap House crowd.

But she also represents the path forward for actual progressive victories. By putting these so-called "women's issues" at the center of her political identity, Newman was able to attract the kind of broad support that has largely eluded Sanders, and build the kind of coalition that can win big for the progressive cause.

Ocasio-Cortez herself is another example of this. The New York congresswoman revived Sanders' campaign with her early endorsement, and served as his strongest surrogate for months. But, as HuffPost reported last week, things appear to have gotten a bit strained due to those "identity politics" disputes. First, as Vanity Fair first reported, the Sanders campaign allegedly scolded Ocasio-Cortez for a speech she gave encouraging the audience to tip off immigrants in the community if they spot ICE agents. Then she was reportedly angry about the Sanders campaign's much-discussed endorsement by Joe Rogan, whose dude-centric podcast has routinely featured lengthy interviews with blatant sexists and racists, including Alex Jones to Jordan Peterson.

The clash highlighted a real difference in the way that Ocasio-Cortez and Sanders approach progressive politics. For Ocasio-Cortez, these feminist and anti-racist concerns are not secondary to economic populism or democratic socialism. As she explained on Twitter recently, effective organizers "make new people feel like theirs is a movement they want to be part of," a strategy that requires asking themselves, "Who else can we include, and how can we listen and include them?"

As Newman's victory shows, a lot of voters who are primarily motivated by so-called "identity politics" can be brought on board — but organizers need to take them seriously and treat them as full partners instead of the junior league.

The past few weeks have shown other examples of how these female politicians really are blazing a new path forward for progressivism, one that doesn't treat feminism and social justice as boxes to be checked off but as central issues.

Along with Newman, for instance, Chicago prosecutor Kim Foxx won her election against primary challenger Bill Conway. Foxx was viewed as beatable because she had declined to prosecute "Empire" star Jussie Smollett for filing a false police report, after he allegedly faked a hate crime against himself to get sympathetic press coverage. Foxx insisted on standing by her office's promise to prioritize prosecuting violent crime over minor infractions, a choice that  was wildly unpopular after all the sensational media coverage of the Smollett case. She prevailed anyway, a show of faith from Democratic voters in someone who stood by progressive principles, even when the going got tough.

Similarly, Rep. Katie Porter, a California Democrat who won her seat from a Republican incumbent and joined the Progressive Caucus, has been a standout star on Capitol Hill during the coronavirus crisis. Porter, who was a co-chair for the Warren campaign, has embraced that same kind of blended progressivism, where feminism is equal to and intertwined with economic progressivism. She's made her own struggle, as a single mother who escaped an abusive marriage, an inescapable part of her message.

Porter, who studied under Warren in law school, is a pointy-headed policy wonk like her mentor, and fully embraces her no-nonsense image. It doesn't read as "radical," but that is Porter's strength — like Warren, she presents progressive policies as common sense, and can bring people along who might be wary of Sanders-style confrontational politics.

The power of Porter's approach was demonstrated last week, when she used calm but relentless questioning (complete with a whiteboard) to cornered CDC director Dr. Robert Redfield, a Trump appointee with a controversial right-wing past. By showing up with her research in hand and an air of confidence about her, Porter forced the reluctant Redfield to commit to free coronavirus testing for every American who needs it.

Yeah, that's definitely mom-making-you-clean-your-room politics. But it works. Better yet, it's the kind of politics that can help make progressive ideas more appealing to the kind of Democratic voters who have now turned to Joe Biden because they worry that Sanders is more talk than action.

These women are the future of the progressive movement. They're ready to step forward not only to lead it, but to grow it into the future. So it's time for Bernie Sanders to let go. He gave it a good run in the primary, and he'll always be a history-shaping figure on the American left. But he can't win. His energies should now focused on passing the baton to these younger women who can win next time around — or many times — and make the American future he has fought for a real possibility.