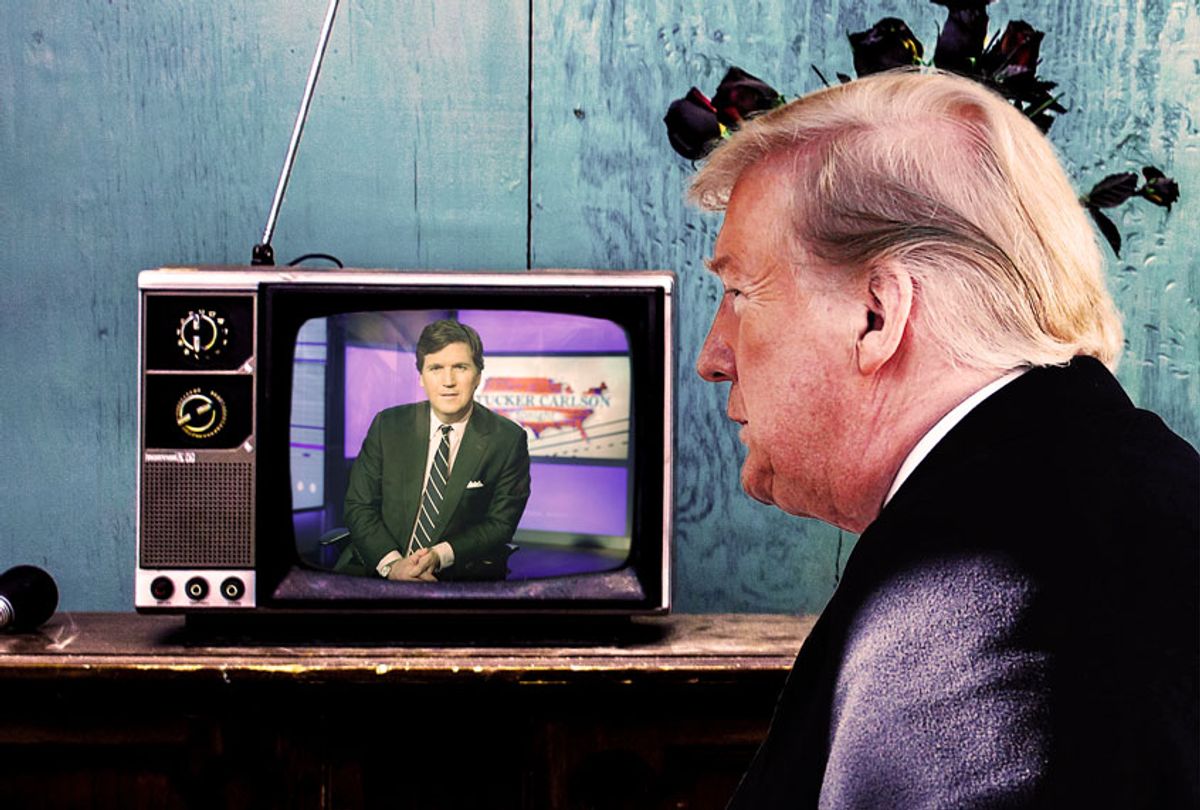 President Donald Trump falsely claimed that he was worried about the new coronavirus before anyone else, but he actually spent weeks trying to publicly minimize the risk posed by the pandemic.

After reporters noted that Trump changed his tone on the public health crisis for the first time on Monday, the president attempted to claim that he had not change his tone at all.

"I've always known this is a real. This is a real. This is a pandemic," Trump insisted after falsely claiming that cases in the U.S. were going down and not up. "I felt it was a pandemic long before it was called a pandemic. All you had to do was look at other countries . . . No, I've always viewed it as very serious. It was no difference yesterday from days before. I feel the tone is similar, but some people said it wasn't."

In the wake of heavy skepticism about his claim, Trump again asserted Tuesday on Twitter that he had "always treated the Chinese Virus very seriously," using a term for the coronavirus which has been condemned as "racist" and "xenophobic."

However, these claims are contradicted by weeks of video of him publicly rejecting the risks posed by the coronavirus in spite of medical experts' constant warnings. Trump claimed the virus might "disappear" and even accused Democrats of pushing a "hoax" by raising alarm over the outbreak.

Asked on Jan. 22 if he worried the coronavirus would become a pandemic, Trump told CNBC: "No, not at all."

"We have it totally under control," the president claimed in the interview and in numerous subsequent appearances.

Trump's claims came after son-in-law Jared Kushner repeatedly assured him that the media was "exaggerating" the threat, according to The New York Times. But the president's dramatic turnaround on the virus occurred after Fox News host Tucker Carlson appeared to call him out on live TV last Monday.

Carlson, who has also insisted on using the racist term "Chinese coronavirus," as Trump recently began doing, said Republicans have "not been especially helpful."

"People you trust, people you probably voted for," he said, "have spent weeks minimizing what is clearly a very serious problem."

White House sources told The Washington Post that the segment was a "turning point" for Trump that "led the president to start to reconsider his position."

In fact, many of the Fox News hosts that echoed Trump's attempts to minimize the risk posed by the virus are now warning their viewers about its severity. Instead of trying to downplay the risk, some of the hosts are focusing on what an "amazing" job Trump has done to counter the virus, even though the U.S. continues to lag behind the rest of the developed world in testing.

The New York Times reported that Trump was further alarmed by a British analysis that showed that 2.2 million Americans would die unless drastic action was taken to contain the spread. The study predicted it would take at least 18 months to combat the virus and develop a vaccine.

A leaked federal government plan outlining the response to the pandemic that was obtained by The Times showed that agencies similarly warned last week that the pandemic "will last 18 months or longer" and might include "multiple waves" that would strain the country's health system.

Governors around the country agreed that the outbreak was likely to overwhelm their hospitals.

"Without immediate action, the imminent failure of hospital systems is all but certain," New York Gov. Andrew Cuomo said in a Times op-ed this week, urging the Trump administration to send in the Army Corps of Engineers to build overflow hospital units.

The U.S. has fewer hospital beds per capita than countries like Italy, where the virus has caused widespread shortages and forced doctors to deny care to some patients, and a chilling shortage of ventilators needed to treat those with severe cases.

Numerous states are beginning to announce that schools will not reopen before June and a growing number of cities and states have shuttered restaurants and bars, banned large public gatherings and urged people to stay home as much as possible.

The closures have devastated millions of employees who may not be able to return to work for months. Trump admitted Monday that the economy could be headed for a recession. Treasury Secretary Steven Mnuchin said at a private lunch with Senate Republicans that the U.S. unemployment rate could reach 20% during the crisis, according to Bloomberg News. A survey of American workers found that 18% have already lost their jobs or had their hours cut since the outbreak began.

Mnuchin announced Tuesday that the government was looking to send people checks of $1,000 or more "in the next two weeks." But Mnuchin privately told Senate Republicans that the checks would not go out until the "end of April," according to Bloomberg. Even that estimate may be overly optimistic, with journalists noting that a similar plan to send checks to Americans during the 2008 recession took two months.

Despite Trump's support for the plan, Republicans like Sen. Lindsey Graham, R-S.C., have already pushed back on the proposal, calling it a waste of resources.

"I said an extra thousand on top of your paycheck is money wasted right now," he said. "I don't think people are looking for a one time check from the government."

Republicans have already gutted the paid sick leave provision in the House-passed coronavirus relief bill, providing protections for just 20% of workers while exempting large companies with more than 500 employees from having to provide sick leave. The bill was further stalled by Republicans even after it passed, leading the Trump administration to pressure Senate Majority Leader Mitch McConnell, R-Ky., to get it over the finish line. But even after McConnell agreed to fast-track the bill, Sen. Rand Paul, R-Ky., further delayed it by pushing a proposed amendment related to the child tax credit and the war in Afghanistan that has no chance of passing, NBC News reported.

Even as Republicans dragged their feet on providing urgent aid to hundreds of millions of Americans, Trump announced Friday that the U.S. would help bail out oil companies by buying up as much as 77 million barrels in response to the recent price slump. The president also vowed to help the airline industry, which is seeking $50 billion even though airlines have spent 96% of their free cash over the last decade rewarding rich shareholders with stock buybacks.

"Diverting public funds to bail out this industry will do nothing to stop the spread of this deadly virus or provide relief to those in need," a group of House Democrats said in a letter to Trump on Tuesday. "Using this public health crisis as an excuse for another giveaway to the fossil fuel industry is badly misguided."