A last, desperate pivot: Trump and his allies go full racist on coronavirus

No longer able to write pandemic off as a "hoax," Trump and his supporters exploit crisis in ugliest possible way 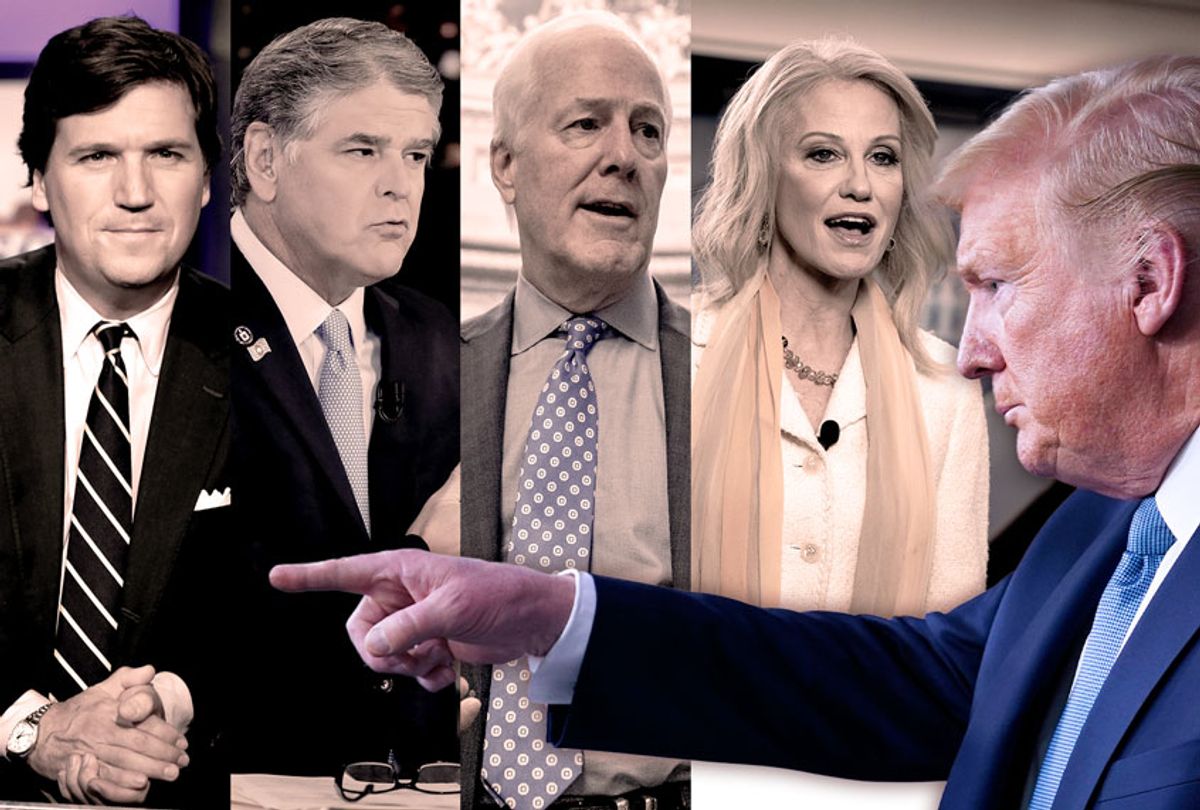 What's remarkable is that this hasn't happened sooner, honestly. Donald Trump, his propaganda apparatus and his fellow Republicans have gone full-tilt with the racism, now that simply denying that the coronavirus is a real problem is no longer an option.

Trump is always eager to find an angle to unspool some demagoguery about how nonwhite people are the enemy, so it was genuinely surprising that he focused, at first, on minimizing the problem. It didn't suggest the man has any actual decency, of course, but it was entirely expected he would default to racism, even when trying to manipulate the stock markets.

But those days are over. The virus is spreading rapidly, people are going stir-crazy stuck at home and the economy is tanking. This is the kind of crisis that opportunistic racists barely dared dream of before. Indeed, Fox News host Tucker Carlson has been all but pleading for weeks for Trump and his fellow right-wing talking heads to move away from denialism and towards racist exploitation.

Trump is finally listening. He's started call this epidemic the "Chinese virus" and, like all racist trolls, is playing dumb when called out for it. He's said it's "not racist at all, no, not at all" and that he wants "to be accurate" and that the virus "comes from China."

Trump's racist trolling is sending Carlson into bouts of near-orgasmic ecstasy. On Tuesday, he swooned that the president's "Chinese virus" rhetoric was an example of "Trump at his very best."

On Wednesday night, Carlson added some conspiracy-theory to the race-baiting, insisting that the Chinese "know that wokeness is our Achilles' heel and they know they can control us with it" and that "any conversation in this country, no matter how serious, can be shut down instantly by somebody, maybe a mindless ABC correspondent, saying 'racism.'"

Carlson is being coy here about what "conversation" he feels the word "racism" is shutting down. But reading between the lines, of course, it's obvious: A conversation about whether or not it's OK for white people to use this virus as an excuse to paint nonwhite people, especially foreigners, as dirty and subhuman.

Carlson knows, of course, that if we actually have that discussion, conservatives lose. There is no rational argument, no facts that can be brought to bear, that prove the racists right. Nor is there anything substantive to be gained from painting East Asian people as dirty. Doing so will not slow down the virus at all.

So instead of actually having the debate, which he knows he would lose, Carlson will pretend this debate is being censored. It's a neat trick that the right has perfected in recent years: Pretend to have a winning argument without actually actually having one.

No, the real reason that Trump, Fox News and so many Republicans are leaning hard into racism angle is to deflect blame for how badly they screwed the pooch by spending weeks denying this virus instead of fighting it.

Sean Hannity is running eagerly with the new blame-Asians strategy. Along with Rush Limbaugh, Hannity was among the most eager of right-wing pundits to hype the idea that the coronavirus crisis was a hoax. Now he feels humiliated as he gets called out for it, not just by progressive sources like Salon and Media Matters, but by mainstream publications like the Washington Post, which compiled a video of Fox News hosts turning on a dime after weeks of downplaying the coronavirus threat.

Wednesday, Hannity accused the people who called him out for this of "unwittingly doing the bidding of China."

This idea that Carlson and Hannity are peddling, that China has some sinister agenda that anti-racists and people who think it's bad to lie about coronavirus are serving, is nonsensical to those outside the right-wing bubble, of course. If one thing is crystal-clear in all this, it's that coronavirus has been incredibly disruptive to China and a worldwide humiliation for their government. It's not something the Chinese regime is delighted about.

What Carlson and Hannity are doing is winking at widespread conspiracy theories on the right that suggest China deliberately created this virus to harm the U.S. — theories that Sen. Tom Cotton, R-Ark., has shamelessly touted. And while no one is defending the authoritarian Chinese government, the reality is that this kind of conspiracy theory is more about racism and xenophobia than anything else, and appeals to ingrained stereotypes of Asian people as underhanded and sinister. In the real world, the main victims of Chinese authoritarianism are not white Americans, but ordinary Chinese people.

Some Republicans, of course, aren't interested in the more elaborate forms of racism, but just want to kick it old school.

"China is to blame because the culture where people eat bats and snakes and dogs and things like that," Sen. John Cornyn of Texas told reporters on Wednesday, drawing completely accurate accusations of racism.

Has Cornyn conveniently forgot that Texans also eat snakes —specifically rattlesnakes? As a Texan, I can attest to this — I've certainly done it. My people also eat bull testicles, jokingly calling them Rocky Mountain oysters, which should render us unfit to accuse anyone else of eating weird food. But, of course, racists like Cornyn aren't known for possessing any shame or logical consistency.

A special call-out goes to White House spokeswoman Kellyanne Conway, perhaps the most shameless of the trolls, who performed fake outrage at accusations of racism against the Trump administration by declaring, "I'm married to an Asian." (Her husband, George Conway, is of Filipino heritage.) Kellyanne did not note, however, that her husband appears to despise her and her racist boss, and has built a side career for himself calling them out for their nonsense.

All this racism primarily serves the purpose of deflecting blame from Trump onto Asian people. It also serves an important secondary purpose: Giving conservatives an imaginary narrative where they're the victims, instead of the people who created this problem in the first place by electing an incompetent, sociopathic game-show host to the presidency.

The troll game goes like this: Say something wildly racist. When called out for the racism, immediately declare yourself a victim of "political correctness run amok" and start making bad-faith arguments about why your obvious racism wasn't racism. Ta-dah! Now you're debating "political correctness" instead of the wisdom of empowering a lazy, lying wannabe fascist dictator, which is a debate that you, the conservative, will lose.

All credit to Atlantic editor Adam Serwer and Media Matters rapid response director Andrew Lawrence, who called out this troll game for what it is.

None of which is to say that liberals can "win" by refusing to call out racism. This racism is both entirely sincere and being cynically deployed to score political points. Liberals and progressives, however, should avoid getting mired in debates about what does or does not constitute racism. Conservatives are being racist when they say things like "Chinese virus" or "Kung-Flu," and they know it. If they claim otherwise, they are lying. No further debate need be had.

Instead, liberals can and should focus on calling this out for what it is: Republicans claiming to be the party of "personal responsibility" but have refused to take any responsibility for this situation, even though they caused it by electing and protecting their incompetent, narcissistic president who thought he could lie a viral pandemic into not happening. Efforts to blame Asians are a naked attempt to evade accountability for their mistakes. Honest people on the left need to keep pointing that out, and refuse to let conservatives change the subject with these racist slurs.