Scientists are trying to diagnose concussions through a simple blood test 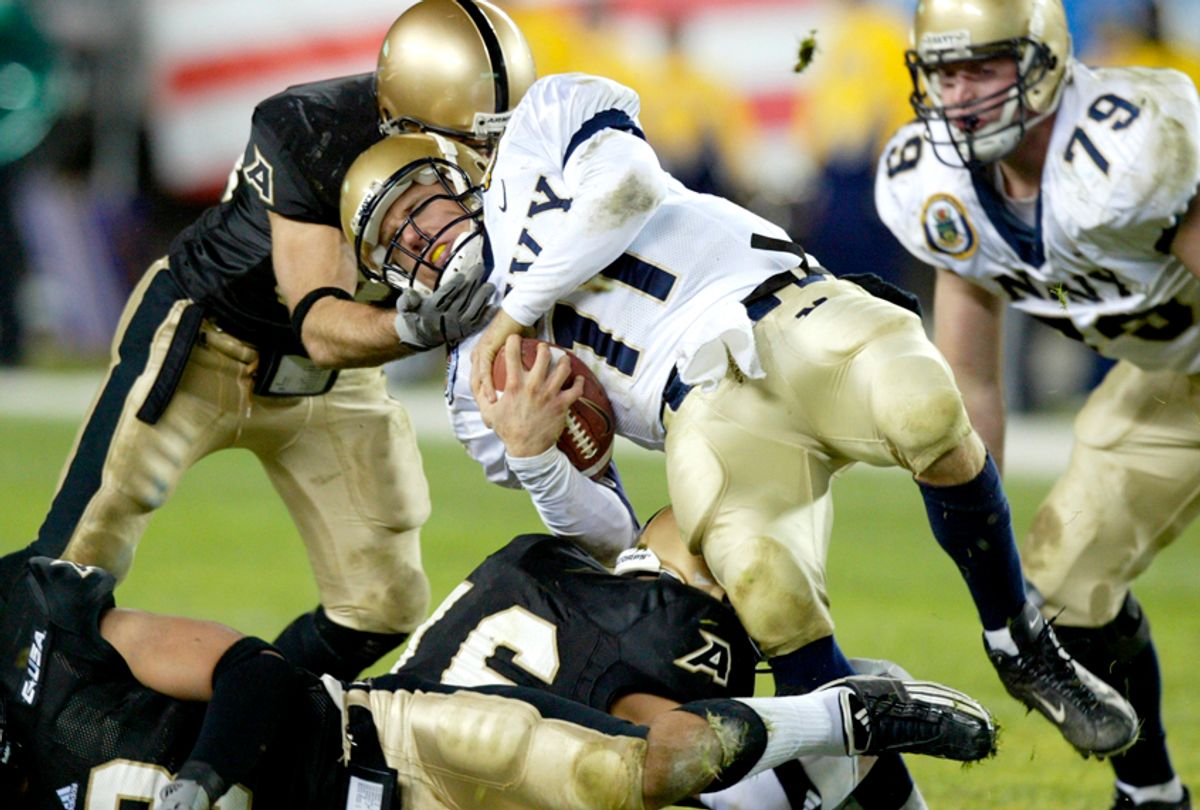 When an athlete breaks their arm, the symptoms are usually clear. An X-ray can show the extent of the injury, and a doctor will most likely place the arm in a cast to heal. But what happens when the one of the main injuries plaguing athletes has no visible or consistent signs or symptoms? How are we supposed to keep athletes safe from an injury we don't really know how to diagnose or treat?

Concussions are a mild type of traumatic brain injury typically resulting from force transmitted to the head. They affect an estimated 300,000 athletes in the United States every year. But they can be hard to diagnose. Symptoms vary from person to person, but typically include physical symptoms, including headaches, nausea, dizziness, and balance problems. Cognitive symptoms, such as difficulty concentrating or forgetfulness, and emotional symptoms, like irritability, nervousness, or anxiety, can also occur.

There is no single distinguishing feature of a concussion. Most of these symptoms can also be present in other types of injury or disease. In many cases, even brain scans of concussed patients, such as MRI or CT scans, appear normal. As a result, researchers are racing to find alternative methods to better diagnose concussions.

Recently, there has been new hope that specific biomarkers — objective and quantitative indicators of disease, illness, or injury — could signify someone has developed a concussion. The use of biomarkers to diagnose diseases has already proven successful for many types of cancers and heart damage. These biomarkers include levels of certain proteins or molecules in blood, urine, or even saliva.

To date, many potential biomarker molecules have been examined for identifying concussions. For example, a recent study in Neurology showed a correlation between the production of certain inflammatory molecules, such as interleukins, within six hours of an athlete sustaining a concussion and the duration of time for which they experienced concussion symptoms. Although there's value in understanding the link between these molecules and concussions, the problem remains that biomarkers like interleukins are not specific to concussions.

There is currently only one U.S. Food and Drug Administration (FDA)-approved blood biomarker testspecific to traumatic brain injuries used to detect brain bleeds.  Amazingly, in clinical trials it was able to predict the presence of intracranial lesions with 97.5 percent accuracy. The test looks for the presence of two proteins that are secreted into the bloodstream after head impacts: glial fibrillary acidic protein (GFAP) and ubiquitin C-terminal hydrolase-L1 (UCH-L1). Both proteins are influential in establishing balance in the brain. GFAP plays a role in maintaining the blood-brain barrier, and UCH-L1 is important to ubiquitin, a tag that is added to proteins to indicate their use in metabolism.

Having a blood test like this become widely available could change the way concussions are diagnosed. A blood test reduces patients' exposure to radiation from the scanning methods currently used to determine the presence of brain bleeds. But the test will only work for the most severe concussions, and brain bleeds are actually quite rare following a concussion. Additionally, FDA's approval does not allow use of the test in children, who remain vulnerable to both concussions and radiation from brain scans.

Nevertheless, the scientific method behind this study provides a potential model for the development of biomarkers — instead of tackling concussions as a whole, researchers can look for biomarkers for individual symptoms. Researchers, led by physician Linda Papa of the Orlando Regional Medical Center in Florida, have continued testing on these two proteins, GFAP and UCH-L1.

Typically, the control groups in studies of traumatic brain injury biomarkers are vital to set an appropriate baseline against which to compare data from patients with concussions. These control groups are often high-level athletes, due to the fact that athletes tend to be readily available to researchers and have well-documented recovery processes. But data suggests that only half of all traumatic brain injury patients who seek care in U.S. emergency departments were injured while playing contact sports.

Papa's study included 712 trauma patients, with injuries resulting from both sport and non-sport-related trauma. This provided the unique opportunity to include trauma patients that had sustained head contact, but did not self-present with concussion symptoms as a control. Papa and the research team compared GFAP and UCH-L1 protein levels between three groups: those with head injuries resulting in a concussion (diagnosed through traditional methods), those with head injuries without a concussion diagnosis, and those that had been injured but did not sustain head trauma.

They found that UCH-L1 levels were not specific to concussions — the protein also increased in patients with non-concussive injuries. GFAP levels, on the other hand, were higher than normal for at least seven days post-concussion, and so GFAP was determined to be the most promising biomarker for concussions since it was elevated only in concussion patients. People with concussions often do not seek immediate medical attention, so its longstanding effect makes GFAP an even better candidate.

Deciding when someone has "healed" from a concussion is another potential use of biomarkers. One potential biomarker for this purpose is brain-derived neurotrophic factor (BDNF). Typically, BDNF promotes the health and growth of neurons in the brain. Studies have shown that low levels of BDNF are associated with prolonged symptoms of a concussion or "incomplete recovery." BDNF can be measured from blood and saliva samples, and has been shown to accurately decipher between people with concussions and those without.

Current treatments rely on the patient to declare when they are symptom-free. For athletes in particular, the pressure to get back into play is intense, and it is easy for patients to fake feeling healthy. Introduction of tests like the Buffalo Concussion Treadmill Test aim to determine the exercise tolerance of concussion patients by comparing their heart rate at rest and during exercise. This can then be used to predict patients' levels of recovery.

Using the Treadmill Test in conjunction with biomarkers could help provide even more nuanced information about recovery. Perhaps someday all of these potential biomarkerscould be used together: GFAP and UCH-L1 to determine the presence of a brain bleed, and BDNF to provide insight into the severity of the concussion itself. Going forward, it will be important for scientists work together to define particular symptoms of a concussion, both on a biological and physiological level. The more specific we get, the easier it will be to define biomarkers, and to identify clusters of physiological changes in order to define the disease.