"The risk of being undercounted disproportionately falls on communities of color," a letter from Democrats read 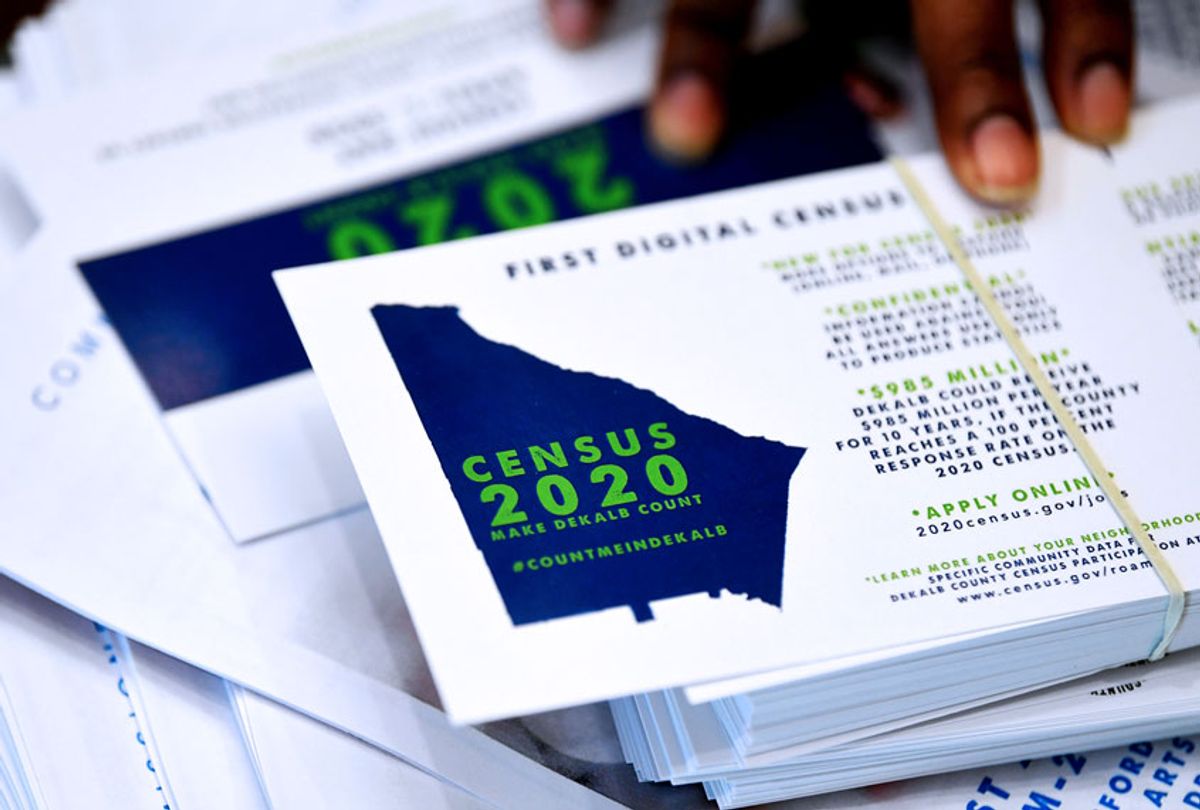 A worker gets ready to pass out instructions on how to fill out the 2020 census during a town hall meeting in Lithonia, Ga. (AP Photo/John Amis)
--

Lawmakers and civil rights groups are warning that the novel coronavirus crisis could devastate minority communities for the next decade if the outbreak upends the 2020 census, which normally takes place in spring.

The Census Bureau announced on Wednesday that it will suspend its field operations for at least two weeks to protect the safety of workers and respondents. But medical experts say measures to control the spread of the virus will likely be required for much longer, leaving groups like the NAACP concerned that minority communities, which are already regularly undercounted, will be devastated even further if field workers are unable to go door-to-door.

The Census Bureau conducts a count of the United States population once every decade. The count helps determine how many congressional seats and Electoral College votes each state gets and determines how the federal government doles out trillions in spending.

The bureau sends out mailers asking people to submit forms online, by mail, or by phone, and then sends out an army of 500,000 field workers to go door-to-door to track down people that failed to respond. These field workers also distribute forms to unconventional addresses like those at many Native American reservations and in remote locations. They also perform a count of about half a million people in homeless shelters. Some of these workers were already in the field, though the operation does not fully ramp up until the end of May.

The Census Bureau initially responded to the spread of COVID-19 by instructing field workers to keep their distance from respondents and providing them with sanitizer. But Census Bureau Director Steven Dillingham said on Wednesday that field operations would be suspended until at least April 1 as the agency determines the best way to protect workers and respondents.

"The public is strongly encouraged to respond to the 2020 Census online using a desktop computer, laptop, smartphone, or tablet, and can also respond by phone or mail," Dillingham said.

The move came after a census field supervisor tested positive for COVID-19, requiring a number of other employees to self-quarantine, according to NPR.

Margo Anderson, a census historian at the University of Wisconsin-Milwaukee, told the Associated Press that the move was unprecedented.

"I don't think I've ever heard of such a suspension, nationwide," she said. "We're in uncharted territory on the census, as well as everything else since last Friday."

Terri Ann Lowenthal, a consultant on census issues for advocacy groups pushing for an accurate count, told The New York Times that any delay threatens to affect the count.

"The bureau clearly hopes to resume operations as previously planned, but nobody has a crystal ball," she said. "The more the Census Bureau has to shift and modify operations and deviate from its plans, the harder it will be to have an acceptable outcome."

Steve Jost, a former spokesman for the Census Bureau, agreed that any delay "greatly increases the risk to the accuracy and completeness of the count."

The accuracy will also be challenged by colleges requiring students to vacate their dormitories and restrictions on access to elderly residential facilities, where residents face a high risk of severe illness from the virus.

The bureau has also scrapped in-person training for workers, according to The Times, and lawmakers are increasingly concerned that the COVID-19 outbreak will result in staffing shortages due to concerns over the spread and because many parents have had to stay home after schools around the country were shuttered.

Census officials told USA Today that the bureau is on track to meet its hiring goals in many cities and that it reached their goal of more than 2.6 million applicants.

"But there is still uncertainly as to whether the bureau will be able to hire and retain enough qualified census takers to collect information from households that didn't respond on their own," Lowenthal told the outlet.

At this point in 2010, the bureau had already hired around 600 percent more workers than it is currently paying, CNN reported.

"We are really stressed right now," David Lee, who heads a network of nonprofits that provide census-related outreach, told the outlet. "We are very behind in hiring, having difficulty hiring staff and outreach workers. Some anecdotally attribute that to fear of exposure to the virus."

Rep. Steven Horsford, D-Nev., told USA Today that he is particularly concerned about the Native Americans, African Americans, Latinos, and Asian Americans in his district.

"Making sure that every one of our communities receive the outreach necessary has been a big priority for us,'' he said.

Rep. Lacy Clay, D-Mo., explained that a key factor in reaching out to traditionally undercounted communities is hiring people who know the areas and look like the people that live there. Census officials previously said they believe the bureau undercounted 1.5 million African Americans and Latinos in the 2010 census.

"That's why I'm all in,'' Clay said, adding that he has promoted census job fairs and recorded PSAs urging so black communities "feel a part of it and you get the buy-in from average citizens.''

But NAACP President Derrick Johnson told the outlet he worries that the Trump administration's delayed response to the COVID-19 pandemic would disproportionately affect communities of color and extend to the census count.

"It is impacting all of our governing functions, including the census,'' he said. "We are in a very gray area, so we don't know what to expect."

It's unclear what, if anything, the bureau can do to provide better protections for workers and respondents so it can carry out the count. Many people have already lost their jobs due to the pandemic, which could boost census hiring, but some applicants said the bureau definitely was not doing enough to ensure their safety.

"I asked what about the safety of folks like me who come to work for you, not to mention the public, and they had no answer for that," North Carolina's Adam Matza, who got a call this week about a census job he applied to months earlier, told USA Today. "They said they're operating as though there's no virus ...That's not really good enough for me. The irresponsibility in that is just astounding."

Democrats have sounded the alarm on the staffing shortages for months.

"There are grave challenges facing this year's Census and, to be honest, I don't have full confidence that the administration is equipped to handle them,'' House Oversight and Reform Chairwoman Carolyn Maloney, D-N.Y., said during a hearing in February.

The hearing came after a Government Accountability Office report warned that "without timely and appropriate actions, the challenges ... could adversely affect the cost, accuracy, schedule and security of the enumeration."

But even as the Census Bureau raced to staff up in time, the ongoing pandemic has set it back weeks.

William Frey, a senior fellow at the Brookings Institution, said times like this is exactly why hard to count groups are "the exact communities that may require face-to-face interaction."

"This is one of the reasons we take the census," he told the Los Angeles Times. "It's the basis for these government and private sector programs that help vulnerable populations in a time like this."

The government relies on accurate data by the census to "make plans for providing supplies and enough food and other items for their populations," added Arturo Vargas, chief executive of NALEO Educational Fund.

"Anybody who is marginalized in society in any way," he said, "by poverty, by language, by housing situation — I think this [virus] exponentially complicates ability to count those populations."

"We'll just have to play it by ear," he said, adding that his department has "done as much as we can to be ready for whatever contingency comes up."

Senate Democrats unsatisfied with the department's response demanded that Dillingham, the bureau director, detail contingency plans to ensure an accurate count of minority communities in a letter earlier this month.

"We particularly want to know what contingency plans are when we get to the face to face interview part of the census," the letter said. "We know that the risk of being undercounted disproportionately falls on communities of color and low income communities and Native American communities."