Many mayors and governors have responded heroically, but the absence of national leadership is already deadly 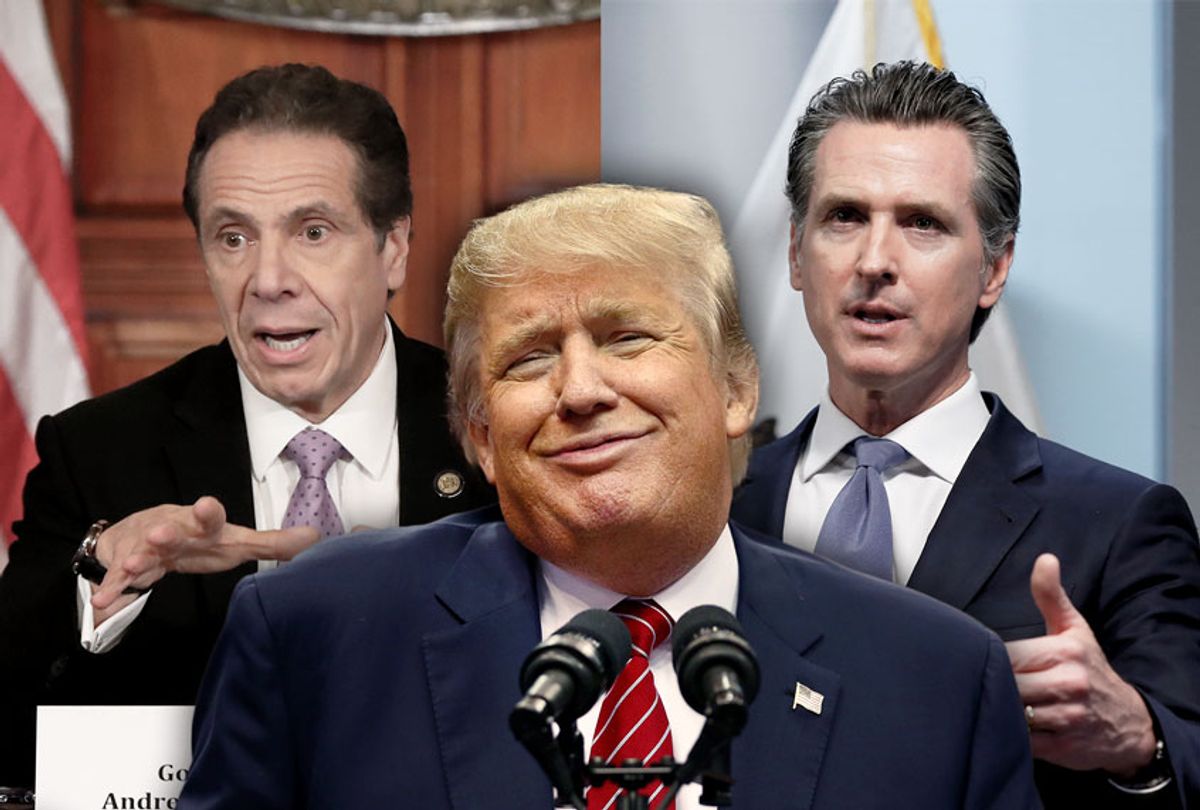 One of the arguments in support of the Affordable Care Act that Chief Justice John Roberts cited, when he sided with the court's majority to uphold the law as constitutional, was the idea that health care cannot be solely left to the states. A disease, after all, does not respect borders.

So far, everything about the coronavirus pandemic is playing out as predicted. If the United States only follows the limited guidance given by the Trump administration, then the current trajectory will likely lead to over 9 million people infected and nearly 1 million deaths. Traditionally public health has been left to individual states, but the fight against COVID-19 is a global crisis that calls for a coordinated effort. Instead, it's the clearest case yet that the federal government, under President Trump's addled leadership, is tragically leading from behind.

AMERICA USED TO BE THE LEADER OF THE WORLD. THANKS TO OBAMA AMERICA ISN'T EVEN LEADING FROM BEHIND.

In the absence of decisive national leadership, governors and mayors suddenly find themselves stepping into the void.

At the top of the week, all six counties in the San Francisco Bay Area issued a shelter-in-place order — the first of its kind in the nation. The governors of Oregon, Washington, New York, New Jersey and Pennsylvania ordered all nonessential businesses temporarily close down. By Friday, even Florida's Republican Gov. Ron DeSantis,  the subject of intense criticism for keeping the state's crowded beaches open during spring break, had called for the statewide closure of restaurants, bars and nightclubs. By week's end, more than 75 million Americans will be living under an order to remain indoors except for exercise or grocery shopping.

"We are not getting what we need," Breed said about assistance from the federal government in an interview with CNN's Wolf Blitzer, "and so we have to take action ourselves to save lives."

After weeks of dismissing the impending pandemic as a "hoax" meant to hurt his presidency, Trump has slowly come around to acknowledge our grim new reality. He's deployed familiar tropes to paint himself as a wartime leader, while simultaneously whining that he hasn't been given enough credit. So as the president keeps on failing spectacularly in this historic moment of crisis, paralyzed by an overwhelming inability to act responsibly even with millions of lives on the line, states have scrambled to provide crucial guidance.

The vagueness and lack of direction out of the White House has left it up to states to administer restrictions, applying what appear to be arbitrary deadlines and leaving local police departments to enforce public adherence. Even executives in red states, from Alabama to Texas to Idaho to South Carolina, have called for public restraint to slow the spread of the deadly pathogen — a move experts have said is necessary to "flatten the curve," but one Trump has written off as a course of action nationally. Democratic governors in Illinois, New York and Kentucky have appeared in front of cameras daily to offer updates meant to reassure their constituents. By contrast, Trump has recently dusted off the podium in the White House press briefing room only to pick fights with reporters about political correctness to distract from his failure. While his biggest sycophants on Fox News are finally treating the threat seriously, states are still waiting for tests more than a month after asking the federal government for help.

"I watch a news conference and they tell us we have testing capacity, but I am telling you we don't have testing capacity. It is not out there yet," Minnesota Gov. Tim Walz, a Democrat, said on Wednesday. Connecticut Gov. Ned Lamont, also a Democrat, ordered all private labs to send negative test results to the state, a move that matters because data on the number of positive tests — without knowing how many were negative — can paint a misleading picture.

"I think it's critical the feds move a lot faster on this stuff," Massachusetts Gov. Charlie Baker, a Republican, complained this week.

For his part, Trump has praised governors' handling of the chaotic situation — even as he admits his administration has only made it harder for them. The federal government is not "a shipping clerk," Trump told governors seeking assistance with the procurement of much needed medical supplies. After encouraging states to fend for themselves, he went on to acknowledge that the federal government's purchasing power dwarfs anything the states can even attempt.

And not all states are equal, which has only illustrated the depths of the problem.

States like Tennessee, where the number of positive cases jumped 57% this week, have so far refused to take executive action, deferring instead to local municipalities to set their own limitations. Even after the entire Georgia state legislature was shut down this week because a Republican member entered chambers while awaiting his test results, Gov. Brian Kemp, a Republican, has so far refused to order any statewide closures. Oklahoma Gov. Kevin Stitt, also a Republican, was still encouraging residents to frequent restaurants and bars this week.

Ohio and Louisiana announced their first cases of COVID-19 on the same day. Gov. Mike DeWine of Ohio, a Republican, responded swiftly and ordered schools closed and large events canceled. Now the Buckeye State, with a population of 11.6 million, has seen fewer than 90 cases and reported no deaths. Louisiana, meanwhile, has issued no such closures and has reported more than 500 cases and 14 deaths — with only 4.6 million residents.

"Our trajectory is basically the same as what they had in Italy," said Democratic Gov. John Bel Edwards said, calling for help from federal officials. Italy's COVID-19 death toll exceeds 3,400.

This patchwork response to a global pandemic is getting people killed. States and municipalities were abandoned for too long by the Trump administration. (New York State was finally deemed a federal disaster zone late Friday after reporting almost 8,000 cases, nearly half the U.S. total.) Still, many are doing heroic work and taking bold steps — like pausing all debt repayment for residents and reclassifying grocery store employees as emergency workers so they qualify for access to state-sponsored child care.