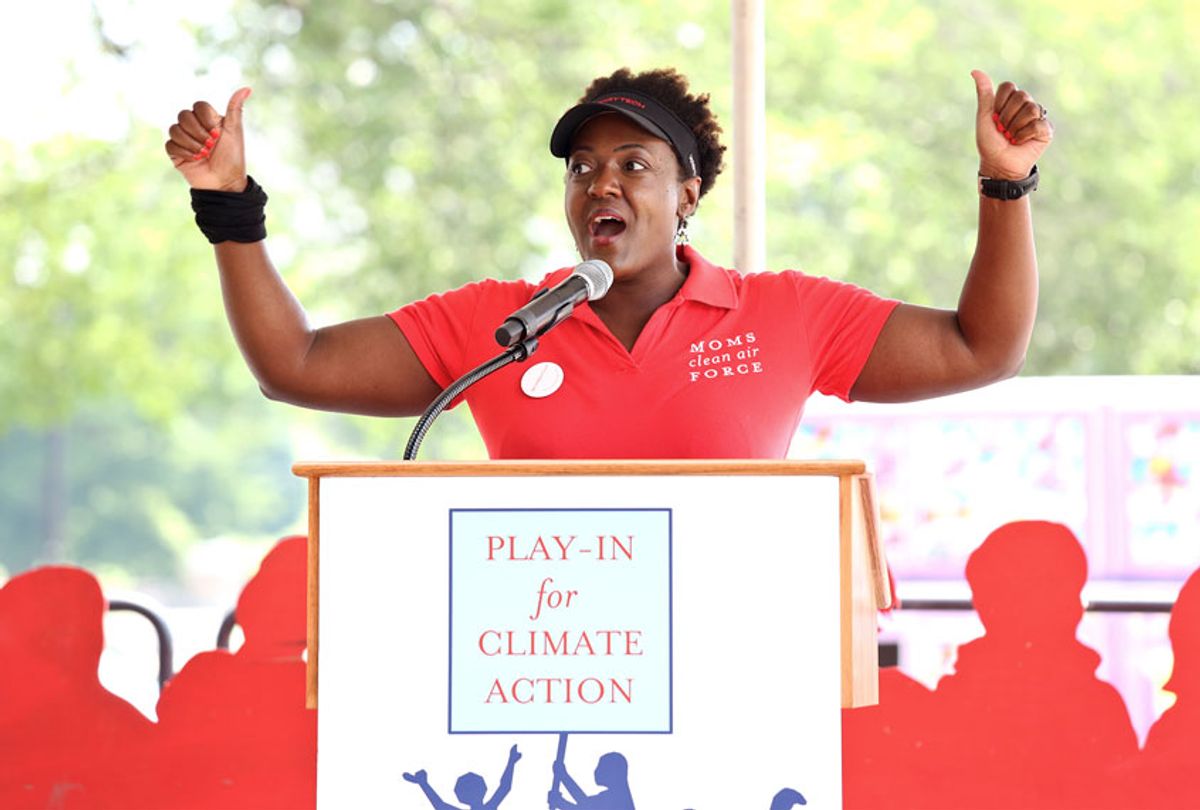 If you were a kid in the '80s and '90s, chances are you spent your weekends in front of the TV or at the mall. When Heather McTeer Toney was a child in Greenville, Mississippi, she spent her weekends at social justice rallies marching with her dad, a retired civil rights attorney.

"I have seen pictures of myself in my Sunday best on the front lines of a rally or a march," Toney told me in our conversation for Inflection Point. "And I'm positive that I was enjoying playing or being around other friends, but I was participating in social justice, you know, so that's what it was like in our house"

That's what it's like in her house today, too.

The little girl in her Sunday best grew up to be Greenville's first African-American and first woman mayor — and the city's youngest mayor, to boot— and regional administrator for EPA in the Southeast under the Obama administration.

As National Field Director for Moms Clean Air Force, Toney sees activism and community service as a way to connect with her kids and make them a part of important conversations about real issues.

Of course, her kids treat such events the way all kids do toward family activities: by dragging their feet.

"My kids are a part of events that we do with Moms Clean Air Force, and they have their shirts that they put on," she told me. "And you know, I hear the whining of 'do we have to go?'"

But once they get to where they're going, the kids have fun, make friends, and make a change. That's not accidental: Moms Clean Air Force builds a sense of play, friendship and purpose into their activism. Each year in Washington, D.C., the group organizes a "Play-in for Climate Action" featuring kids' activities in the morning and visits with members of Congress in the afternoon.

"There is nothing like seeing 200 kids running around dressed as butterflies and in hula hoops and with parachutes and singing songs," McTeer Toney told me. "But it's just such a beautiful display of why we're doing this and how important it is."

McTeer Toney's group centers children in their actions to fight air pollution because they know that kids are on the frontlines of climate change.

"Our focus is to protect children, all children from the impacts of air pollution and climate," she said. "Even for members of Congress, I think, that aren't as enthused about the same type of climate action that we want, respect our organization because we say that we are 'mom-partisan.' It doesn't make a difference if you're Republican or Democrat, tea party, liberal, conservative, that doesn't matter. We're mom-partisan. So we want to know that all of our members of Congress are doing the things that are helpful and healthy for our children. And that has been a wonderful journey."

Moms Clean Air Force is one of a growing number of activist groups that focus on making kids central to and a part of their work. It makes sense since our young kids and teens will be the ones reckoning with the consequences of climate change as adults.

She remembers, as a teen, the impact that the Rodney King verdict and subsequent riots had upon her awareness of the divides in our country.

"In today's society, our young people are seeing very similar types of issues," she said. "And that's inclusive of climate. It's inclusive of immigration, it's inclusive of gun violence. And we have to have conversations with them because they want to do something, they want to be active and they're seeking our guidance on how to do it. And then they're making their own decisions."

At a recent Moms Clean Air Force event, McTeer Toney's daughter made the decision to speak publicly about environmental justice for the first time.

"All of a sudden I look up and here's my daughter doing this television interview with a local news station," McTeer Toney told me. "And she's talking so beautifully about why we're here. And so as I'm, you know, rushing as the mom to get pictures, I saw exactly what was happening to her, which was the same thing that happened to me."

The torch was passed from one generation of social justice advocates to the next.

"You're around it so much that it comes out of you in ways that you can't expect," McTeer Toney says. "It was one of those, you know, teary moments like, 'Oh my God, this my baby.'  And at the same time being extremely proud and I understood, I think, in that moment, how my parents felt about me."

To hear more about how Heather McTeer Toney's focus on her family and community helps her be a more effective activist, listen to our conversation and check out her Inflection Point Toolkit for how to fight for climate safety and clean energy.

And when you're done, come on over to The Inflection Point Society, our Facebook group of everyday activists who seek to make extraordinary change through small, daily actions. Subscribe to "Inflection Point" to get more stories of how women rise up right in your feed.

Our conversation was recorded with production assistance from Bioneers: Revolution from the Heart of Nature podcast.