Is Trump's much-touted chloroquine really a "game changer" for COVID-19? Not exactly

Trump is touting chloroquine as a treatment to COVID-19. But experts say his scientific skills are shoddy 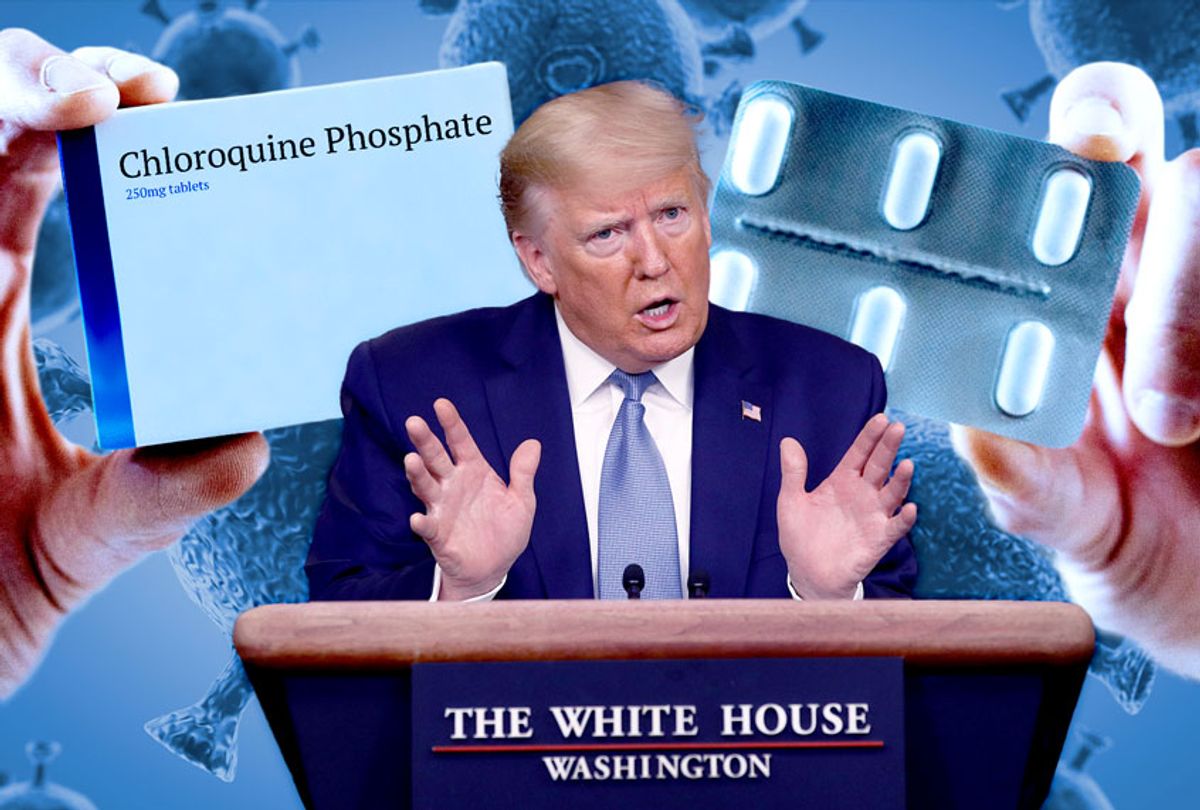 As to be expected, President Donald Trump took to Twitter over the weekend to try to ease public fears about COVID-19 by promoting several experimental drug treatments. In an all-caps tweet, Trump urged the Food and Drug Administration (FDA) to "move fast" to approve a combination of hydroxychloroquine, an anti-malaria drug, and azithromycin, an antibiotic, as a potential treatment for COVID-19, the disease caused by the novel coronavirus. On Twitter, Trump served as hypeman for this medical cocktail, writing that these drugs "have a real chance to be one of the biggest game changers in the history of medicine."

For someone with no background in medicine, Trump is weirdly convinced of the efficacy of these drugs. Last week, in a press conference, Trump said he felt "good" about the possibility of chloroquine, another related anti-malaria drug, and hydroxychloroquine as potential treatment for COVID-19. Today, he shared an article from the New York Post about a man surviving COVID-19 thanks to hydroxychloroquine. Yet anecdotes should not be confused for statistics; most scientists, researchers and doctors will tell you that one anecdotal story from the New York Post does not constitute clinical evidence that any of these drugs can, or should, be used to treat COVID-19.

According to a study published on the web site bioRxiv, there have been 69 drugs identified, including chloroquine, that could treat the respiratory disease that has caused 16,359 deaths and mass economic disruption worldwide. The World Health Organization is looking into both hydroxychloroquine and chloroquine as possible ways to slow or kill the virus, but there are plenty of unknowns that prevent it from being a "game changer," as Trump called it. Science magazine details the concerns in a recent report. Similar to Trump's previous dangerous rhetoric, his claims have the possibility to cause more harm than good. As NPR reported, some pharmacists are concerned about people hoarding the drugs. "Our members are definitely seeing more demand for this medication and possibly some people trying to hoard the medication," Todd Brown, executive director of the Massachusetts Independent Pharmacists Association, told NPR. "Pharmacists are seeing an increase in requests and prescriptions for them, in instances where it's not clear why the patient needs it at this time." Health officials in Nigeria said that three people have overdosed on the drug.

Salon spoke with Rodney J.Y. Ho, a professor and director of the Targeted, Long-acting and Combination Anti-Retroviral Therapy (TLC-ART) program at the University of Washington, about both hydroxychloroquine and chloroquine as potential drugs to treat COVID-19.

As usual, this conversation has been edited for clarity.

First, what are these drugs?

So chloroquine and hydroxychloroquine are both malaria drugs. You've probably heard about this from people that they're accessible because they are FDA approved. But it's not a drug that you buy over the counter, it's a pill that's prescribed— so that's a very important distinction — because that means it has side effects that need to be managed by pharmacists and by relations.

And what are those side effects?

So there are many different side effects, but the big ones are when it's taken with another drug. So it can be as simple as being on a contraceptive that can change the drug levels, then that becomes toxic, so that's what needs to be managed.

So what do we know about how these drugs treat COVID-19?

Drug levels achieved in blood with current dosing regimen for hydroxychloroquine is higher than what is needed in test tubes to kill Covid-19 virus. Based on that, people have been using it as one of the four or five experimental medications [but] because it's not proven, nothing has been tested thoroughly by the FDA. But because it's available by prescription and it's a pill, you can order it.

So because it shows promise in a test tube, does that mean it will in the human body as well?

The virus can kill people in many different ways. [We can observe that it is] killed in the test tube, [but] then you need to go through a long test to make sure that [it will happen] in the patient at the right stage, and the right place that you can use this [drug]. And we don't know that yet. And what other things that the virus is doing, we don't know.

What we do know is that the virus will kill the lung cells. Our lung cells are very big. Think of lung cells as balloons with pockets of cells inside them. These cells are loaded with blood. That's how we exchange oxygen. So when the lung cells are infected, they will kill and collapse those balloons. At some stage, the whole lungs collapse and other cells attack the immune system. So, that's when the hydroxychloroquine might have an effect, but the question is, when is there no point of return? And we don't know that yet. So you can imagine the complications of how to treat this virus, and when to treat it. We don't know how long and how quickly people can die from this — we need to help them by isolating and preventing the number of infections.