"He is legally blocking towns from doing a better job than he is at keeping you alive," MSNBC's Rachel Maddow says 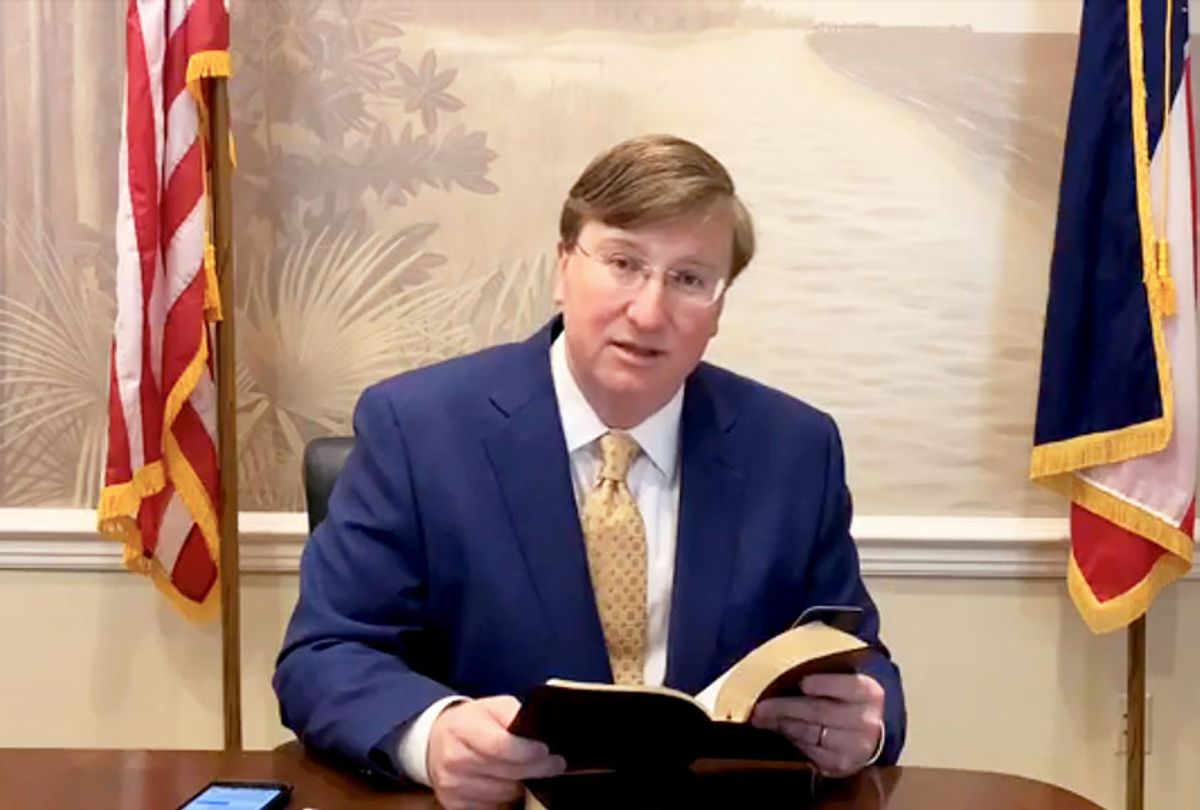 Mississippi Gov. Tate Reeves leads a prayer service about the coronavirus on Sunday, March 22, 2020, on Facebook live. (Office of the Mississippi Governor via AP)
--

Reeves, a Republican, signed an order that labels businesses such as gun stores, department stores and real estate offices as both "essential" and "critical."

The governor closed public schools last week and declared a state of emergency. The number of confirmed COVID-19 cases rose to 377 in the state this week.

The executive order requires people to avoid gatherings of more than 10 people but "does not apply" to the list of essential businesses, which also includes banks, home repair services and restaurants.

"Any order, rule, regulation or action by any governing body, agency or political subdivision of the state that imposes any additional freedom of movement or social distancing limitations on Essential Business or Operation, restricts scope of services or hours of operation of any Essential Business or Operation, or which will or might in any way conflict with or impede the purpose of this Executive Order is suspended and unenforceable during this COVID-19 State of Emergency," the order declared.

It came days after the state's health department advised all restaurants to end dine-in service, which prompted numerous cities to legally require establishments to shutter their dining areas. Reeves' order will allow restaurants to serve dine-in customers, so long as restaurants restrict capacity to 10 patrons and follow social distancing guidelines.

Reeves' order may also override curfews established by several cities if they interfere with "essential" businesses such as Lyft and Uber.

It remains unclear if the order could also force Jackson Mayor Chokwe Lumumba to reopen civic buildings closed earlier this month, according to the Jackson Free Press.

Despite ordering cities to reopen shuttered businesses, Reeves vowed to take action against the state's lone remaining abortion clinic if it provided abortions during the outbreak.

Reeves said during a Facebook Live speech Monday that he did not plan to order a statewide shutdown despite numerous surrounding states implementing severe restrictions. Mississippi saw the largest increase in cases yet Tuesday.

A resident asked Reeves during the address why the state was not following guidelines like those in China, where the number of new cases has plummeted after the nation imposed a strict lockdown on impacted regions.

Reeves came under fire from MSNBC host Rachel Maddow on Wednesday for overruling officials who imposed restrictions while "refusing to act statewide."

"You should know that your government is breaking new ground when it comes to the coronavirus pandemic," Maddow warned the state's residents. "The governor of your state today has pioneered a whole new kind of response to the coronavirus pandemic, in which he is legally blocking towns and cities in your state from doing a better job than he is at keeping you alive. He is undoing public health measures and insisting that the state will not have them."

"Because we pray and reject dictatorship models like China they say we are 'untroubled,' undermining our warnings and pleas to stay home," he tweeted. "We're following our experts and I've spent many sleepless nights praying for wisdom in this unprecedented time."