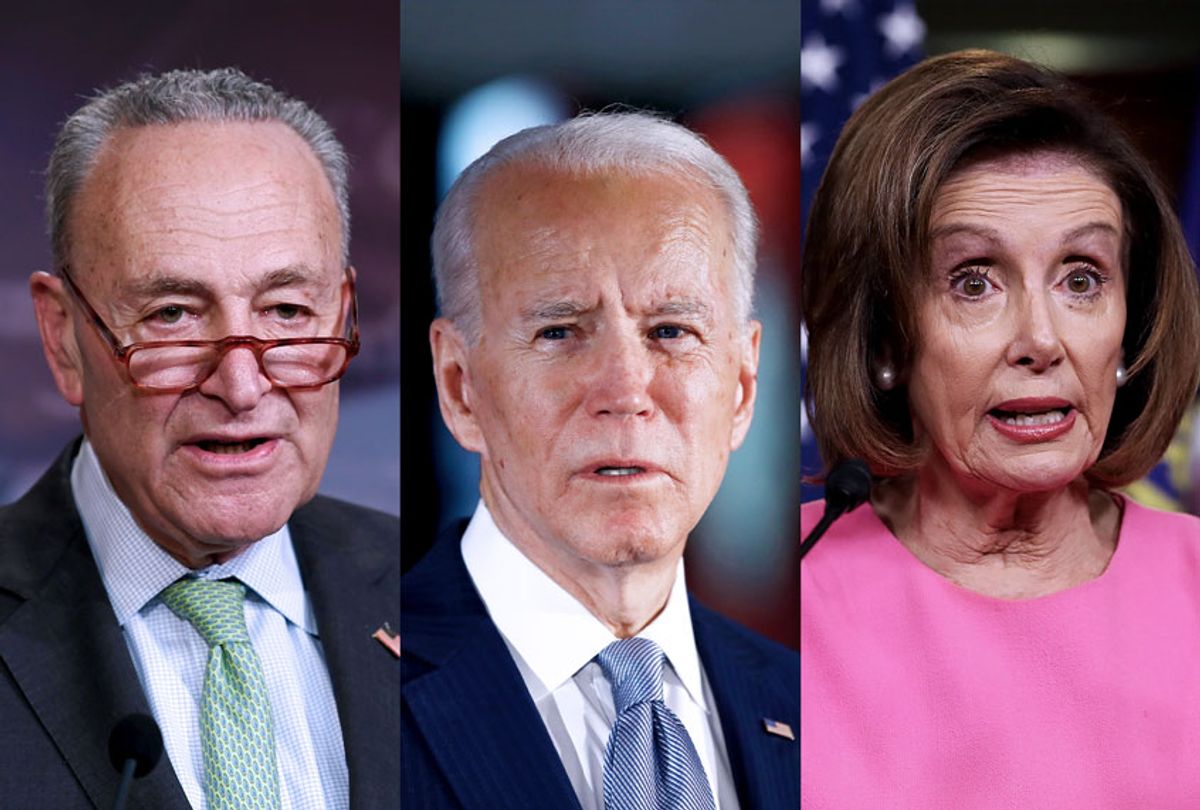 The one extremely thin silver lining of the current crisis and the economic collapse that has followed is that it provides indisputable proof that workers, not CEOs, are the engine of the American economy. If we are on the verge of another Great Depression, as seems likely, that didn't happen because the occupants of the C-suite are working from home, but because millions of ordinary working people can't show up for work in public-facing jobs that keep this country running.

The Senate reacted to this by passing a $2 trillion stimulus that expands unemployment benefits, will send a check to most American households, and — since Republicans are running the show — $500 billion in industry bailout money. This bill may mute some of the worst economic effects of this crisis, but there's a real threat that this will just be a repeat of the 2007-8 economic crash and stimulus, in which corporations and the wealthiest Americans recovered nicely but the rest of the nation never really regained its economic footing.

Americans technically got their jobs back, but, due to soaring wealth inequality, many or most never regained their pre-recession levels of wealth. Millennials, who were just starting their productive adult lives when the crash hit, have been particularly screwed over, and are largely unable to build any real wealth at all. Millennials only own about 3% of the country's wealth, whereas boomers held about 21% of the country's wealth when they were about the same age in the 1980s.

In light of this, what Democrats need to do — because it's the right thing to do and in order to drive a big electoral victory in November — is bring back the politics of the Great Depression. It's time to run on a new New Deal, one that won't let "recovery" be defined by how the wealthy benefit and whether 401k's recover their value, but will address deep economic inequalities by redistributing the wealth out of the C-suite and towards the people who actually build wealth in this economy.

The current crisis, with all its horrors, provides a neat narrative that Democrats can use to advocate for this new New Deal:  A story of sacrifice repaid.

People are staying home right now not just to protect their own health, but as a collective sacrifice for the greater good. Most people will survive this, but recognize the need to stay home and slow the spread of disease in order to keep hospitals from being overrun and to keep more people from dying.

Recognizing this sacrifice, and arguing that a grateful nation needs to repay these workers with a new New Deal that fixes our grotesque economic inequality, should be a slam dunk. It is, after all, the same kind of argument that got the original New Deal passed in the first place. It's also the attitude that likely informed the marginal tax rates, middle-class prosperity, and relative economic equality of the 1950s. Ordinary Americans had just sacrificed a lot to save this country during World War II, which makes it much harder to justify the predatory capitalism that defines the early 21st century.

The good news is that we're winding down a presidential primary in which not one, but two candidates — Bernie Sanders and Elizabeth Warren — made robust arguments for raising taxes on the rich to pay for things like universal health care, free college tuition and affordable child care. There are many proposals floating around for a Green New Deal, which would implement 1930s-era federal investments in building infrastructure that would put people to work, rebuild our economy and directly attack the climate crisis.

While former Vice President Joe Biden, who is decidedly more moderate, has pretty much locked up the Democratic nomination, that's not evidence that voters reject these ideas. Warren's plan for a wealth tax to pay for these ambitious programs was polling at 63% before this crisis hit. It's safe to say those numbers would probably go up if Democrats actually embraced rhetoric about repaying American workers for their sacrifice and making clear that it's workers who build wealth, not CEOs or "entrepreneurs."

Biden has already shown himself open to moving leftward in response to public opinion. He could and should fully embrace these plans to address epic levels of economic inequality, which will only be exacerbated by the current economic collapse.

In the 2017-2018 midterm cycle, Democrats offered a half-baked notion of what I'm suggesting here, called "A Better Deal." It had some good ideas, such as more restrictions on corporate mergers, job creation for infrastructure building and regulatory controls meant to control rising prices on pharmaceutical drugs.

But it really wasn't ambitious enough to address the main problem in the American economy, which is that the top 1% of Americans own more wealth than the entire middle class combined. To get a real sense of how grotesque wealth inequality is in this country, watch this video of a CBS reporter illustrating it to shoppers in a New York mall. (Don't blanch at the close personal contact — this was in the before time.)

WEALTH INEQUALITY: The richest 1% controls more wealth now than at any time in more than 50 years. But what does wealth inequality really look like?@TonyDokoupil turned America's economic pie into a real one and asked people a simple question: Who gets what? pic.twitter.com/scGPKcHbie

Not only is it the right political time to push for a restructuring of our economy so that it's both greener and more just, that's critical to give younger generations of Americans any hope of a better future.

The New York Times Friday published a piece about the hellscape facing new college graduates, who are watching their job prospects dissipate in the wake of the economic collapse. The grim reality is that this economic setback, happening at such a crucial time in their lives, may be impossible to truly recover from. Millennials faced a similar setback in 2008, with the result that most are still unable to start saving for retirement, are saddled with enormous debt and cannot hit basic adulthood milestones like buying a home.

There is an opportunity here not to screw Gen-Z the way we screwed over the millennials: A new New Deal, one that helps wipe out student debt, helps young people buy homes and addresses other concerns, like medical bills and child care, that keep people from being able to save money even when they have decent jobs. Jobs will presumably come back when this crisis is over, but the government must do more to make sure those jobs pay well and that basic living expenses don't keep outstripping ordinary people's salaries.

Any such program would likely help older people, too, of course. We all could use a break from the richest Americans sucking up all the wealth that workers actually created. But it would be especially beneficial for younger people who have had their early earning years so horribly interrupted.

Right now, Donald Trump is irresponsibly running around crowing about his desire to "reopen" the economy by Easter Sunday, which would be catastrophic for public health and would probably end up making the economic crash worse. But it's not enough for liberals to call him a ghoul or an idiot in response, though both of those things. Democrats must make a counter-offer: Let's get through this crisis together, America, and if we win in November, we'll repay your sacrifice with a new New Deal.

Our lives have already been upended in ways that seemed unimaginable just a few weeks ago. If the time for drastic action isn't now, then when will that time ever come?