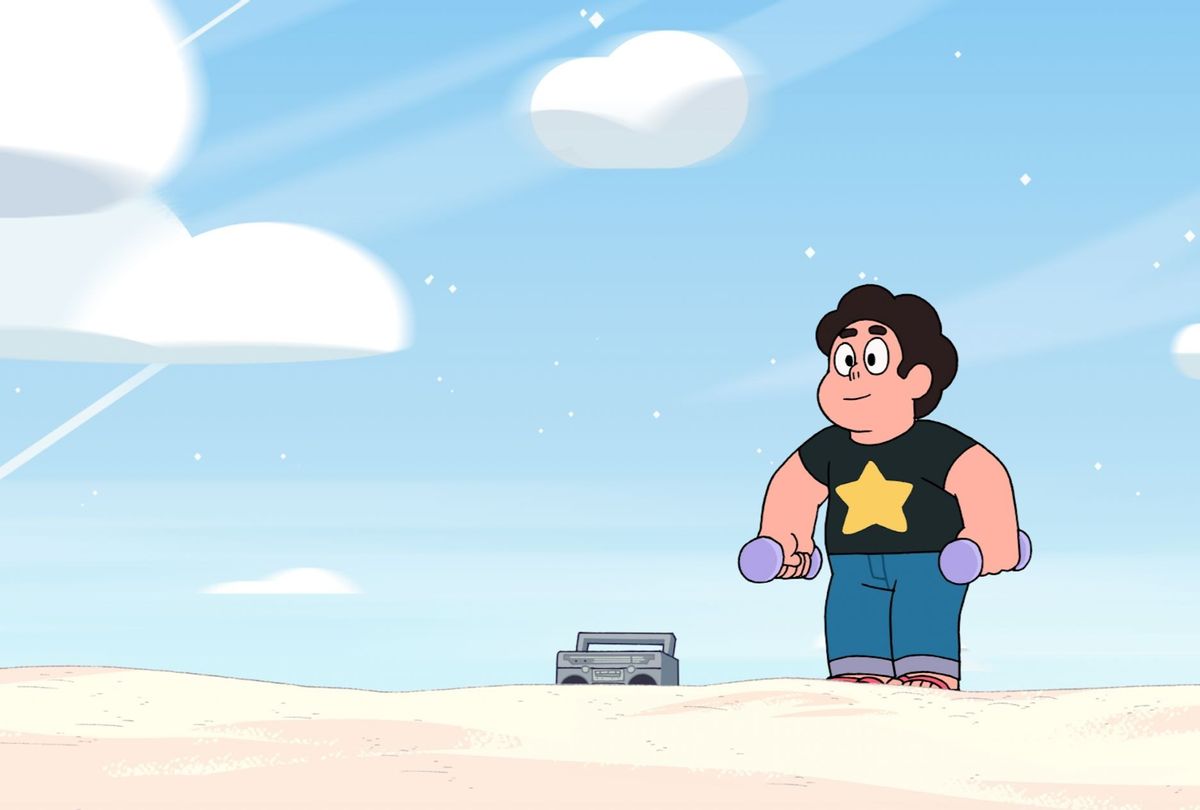 The imaginative and inclusive world of Cartoon Network's groundbreaking "Steven Universe" concluded on March 27, after five seasons, a television movie, and the epilogue series "Steven Universe Future." Its four-part finale wrapped up with "Homeworld Bound," "Everything's Fine," "I Am My Monster," and "The Future," ending with its protagonist Steven bidding farewell to his loved ones. There's a small but meaningful mention of him attending virtual therapy appointments, presumably a measure after a breakdown that transformed him into a kaiju-like beast. These final events sum up the charming eccentricity and validating mission of "Steven Universe."

And while the cartoon's fierce following that propelled the show's longevity can't be denied, it's a series that had a much larger impact on pop culture, even for those who may not have watched it with the same fervor. How do you describe a light-paletted cartoon like "Steven Universe" to a newbie? Imagine a young half-human boy who is raised by three humanlike guardians known as "The Crystal Gems" in the small town of Beach City. His guardians – the collected Garnet, the rambunctious Amethyst, and the straight-laced Pearl – mentor him to use his Gem powers, which are manifested by his Gem-bejeweled belly button. All have a loving but fraught motherly connection to Steven, who himself is a product of the love between their late Gem leader and a human man. The more Steven faces his Gem powers and heritage, explores and sees modes of identity, and copes with stress and anxiety, the more the series illuminates its maximal commitment to self-love and inclusion that wasn't present in any other children's cartoons before.

Since its launch on Cartoon Network on 2013, the show's science-fiction inventiveness, quippy humor, and distinctive characters enthralled its audience. Its scenarios, both idyllic and action-driven, are eye-popping to children. Its shenanigans, especially early ones like Steven transforming his body into cats (yes, cats), can sound silly on paper. Yet, its visual ambition and script paid special attention to mental health, gender identity, and sexuality that helped "Steven Universe" acquire critical acclaim, an LGBTQ+ fanbase, and a GLAAD Media Award.

It is both beside and part of the point that creator Rebecca Sugar, who imported much of "Steven Universe's" goofiness and mature themes from her work with the also-kiddish "Adventure Time," is the first non-binary woman and openly bisexual creator to lead a show for Cartoon Network. Her own lived experience shaped much of her team's mission for inclusiveness, from the diverse body shapes of the Gems, to the assortment of identities, to the subversion of binary gender expectations. This coming-of-age story is centered around a boy who avoids the hallmarks of traditional masculinity. He comfortably dons pink, idolizes his female-presenting (technically agender, and "she/her" pronouns apply) Gem guardians, prefers diplomacy over punching his problems, and sings before a cheering crowd in a dress and glittery make-up. 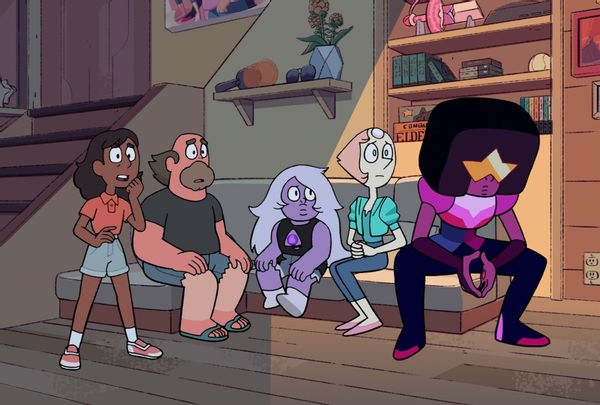 Now the series doesn't mention "sexuality" or "gender identity" aloud but here is a word and power that exists in "Steven Universe": "fusion." Fusion is an act where two or more Gems combine their bodies, abilities, and personalities to form one large whole being, often as a fighting advantage. But we learn later that fusion is more than just a form; it can signify relationships, intimacy, and the permanency as well as the fluidity of identity.

Fusion is an effective visual metaphor for the health of relationships, identity, exploration, and consent. Late in the series very first season, our male protagonist and his female human friend Connie experiment with their own fusion, resulting in Stevonnie, an androgynous (quasi-) human with "they/them" pronouns. Stevonne's presence is electric; male and female characters alike blush at the sight of them. Later in the same season's finale, Steven discovers that his beloved guardian Garnet had been a perma-fusion of two female-presenting Gems. Four seasons later, the two Gems will share the first groundbreaking same-sex wedding in a children's cartoon.

You'll notice that the dialogue around fusion allows the viewers to identify some of the coy messaging in "Steven Universe." In the second season, there's a message of consent in Garnet's "It's not right [to force fusion]" when she discovers her oppressors forced Gems to fuse together. By the time the show enters its fifth season, Steven encounters an implied polyamorous fusion of six Gems, "Maybe more, if we meet the right Gem," they remark.

"Steven Universe" wasn't afraid to addresss some of society's shortcomings either. Throughout the show's run, certain songs stand out for their simplistic yet sheer poetry in asserting identity and tapping into the mysteries of identity. In the Season 1 finale, Garnet sings her rousing "Made of Love" anthem against a Gem who berates her fusion status:"I can see you hate the way we intermingle, but I think you're just mad cause' you're single." One season later, the melody resurfaces in "Something Entirely New," a duet between the two Gems that made Garnet, singing lyrics that echo youths discovering a love that is exhilarating and nerve-wracking, and transgressive to the Gem society that raised, then oppressed them.

And yes, animated children's shows like "Clarence," "The Loud House," and "The Dragon Prince" have taken the steps to feature visible LGBTQ+ characters. But depending on network or corporate interference, many cartoons have struggled with featuring visible queer affection, sometimes with animators relegating LGBTQ+ relationships for the background or quickly passing frames. Even the 2012 "Legend of Korra," which broke ground for slyly developing a romance between two bisexual leading characters, showed symptoms of network restraint by saving the turning point of the relationship for the finale's last moments. It signified a same-sex relationship not through a kiss, but with two women holding hands, tender music, and the two staring at each other in the show's final minutes. In contrast, cartoons like "Steven Universe" and its contemporaries like "She-Ra and the Princesses of Power" and "Kipo and the Age of Wonderbeasts" fall into an exceptional realm of inclusion because they actively explore and forefront queerness in longterm story arcs right within their first seasons.

When children are young and exploring relationships and identity, "Steven Universe" could provide them those templates that society did not give to them. Now the ambitions of "Steven Universe" and "Future" can feel new compared to cartoons that came before it. But nothing about Steven and his Gem loved ones' discoveries and exploration should feel subversive. Nothing about validating LGBTQ+ human and humanoid characters in cartoons should feel subversive. Nothing about telling kids that it's okay to work through the beauty and messiness of self-discovery should be subversive. A cartoon that's a rallying cry to love yourself and grow into your identity should be nothing radical for children. "Steven Universe" envisions a world where queerness is extraordinary as it is normal. 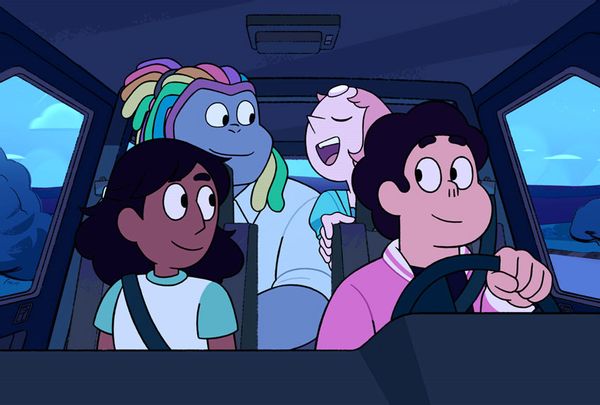