"Breeders" feels your parenting pain and cusses right along with you

Salon chats with the stars and creators about their honest FX comedy, which shows loving parents losing their minds 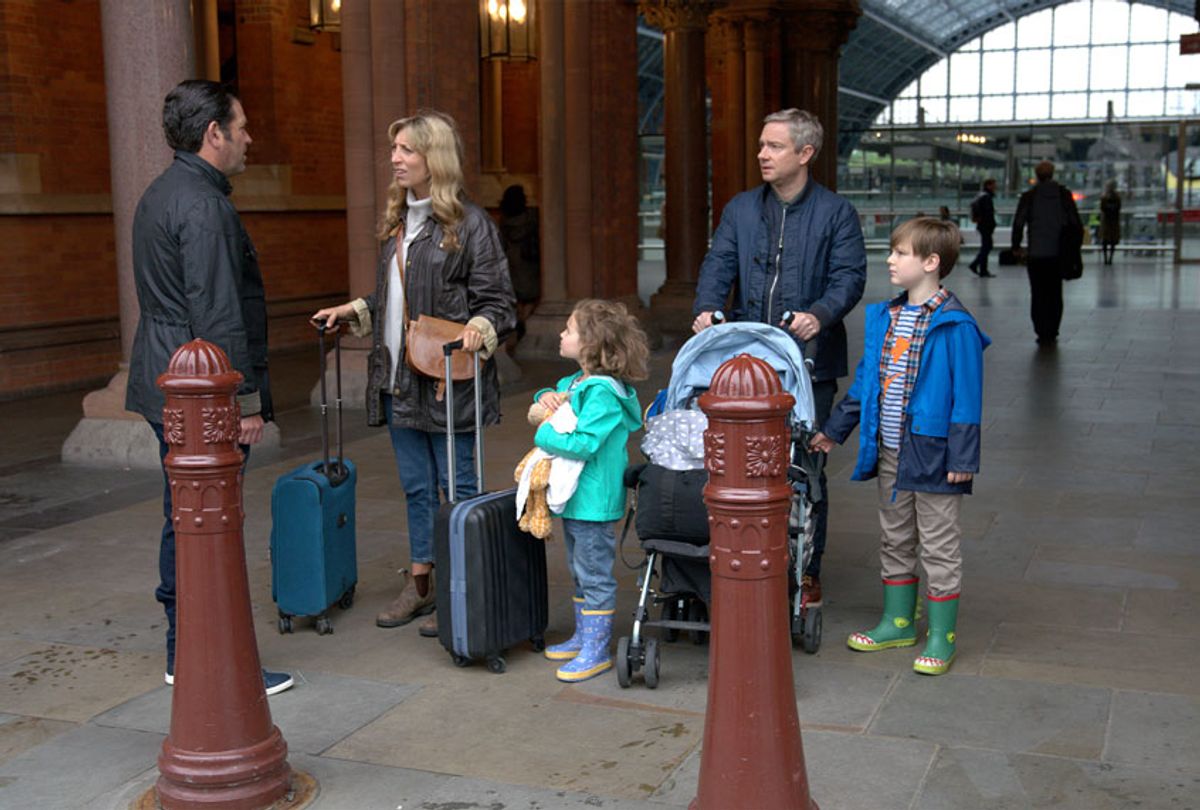 "Breeders" opens with what is probably a familiar scene to parents of young children. Martin Freeman's character Paul is attempting to prep for a work presentation at the kitchen table he shares with his partner and co-parent Ally (Daisy Haggard). Upstairs from him their young son and daughter are screaming at the top of their lungs, slamming objects around the room and generally making it impossible to concentrate.

Soon Paul reaches his limit, gets up and trudges up the stars, muttering quietly to himself all the while. "Don't do this, mate. Don't do it. Doesn't help. If you go in there and you scream, they cry and you hate yourself. Breathe. Talk to them. Do it better, Paul. Be better."

This pep talk gets him to the threshold of his kids room, and as he opens the door he announces himself with, "JESUS F***ING CHRIST. HOW MANY TIMES DO I HAVE TO TELL YOU BE QUIET?" The tirade continues uninterrupted until Paul pauses and takes in their shocked faces. "Sorry," he says a good deal more quietly and sheepishly. "I'm working. I didn't mean any of that." They're still stunned silent. He apologizes again and slinks away.

"Breeders" is a comedy aptly described as black, in the British comedy sense of that qualification. The descriptor fits, but oddly enough, so does the notion that in its own way, it's also a family sitcom. A brazenly, unapologetically honest one. And this particular moment was born from a very real place – Freeman's subconscious. That opening scene is taken more or less directly from a dream he had, and an ongoing frustration.

"I'd felt it for years actually," he told Salon in an interview conducted prior to the show's March debut, "being in nice middle-class dinner parties where everyone just talked about how amazing it was to be a parent. And no one was be being honest, actually, about the fact that yes, of course it's amazing. And it goes without saying that you love your kids more than life itself. But what doesn't usually get said is, in my experience, is this is f***ing hard."

With "Breeders," he explained, he and his co-creators Chris Addison and Simon Blackwell hope to gives voice to the dark part lurking within the hearts and brains of most adults with children, a voice and a truth often silenced. It is this: even the best of parents (and despite what that cold open may indicate, Paul and Ally are a doting, loving mother and father to their boy and girl) occasionally are pushed to fits of extreme rage.

Directly following that outburst, Paul voices the conundrum every devoted parent probably feels at some point. He loves his kids more than anything. He would die for them. And sometimes, he also wants to kill them.

All of this makes the FX series a rollicking, commiseration fest anybody who understands that being a parent is thankless, rewarding, beautiful, aggravating, blissful, infuriating, self-sacrificing and tough.

Blackwell, the comedy's showrunner, sums up the show's core philosophy thusly: "When you have a child, you're handed this perfect human being. And the deal is you bring them up, you launch them into the world, and you try and do as little harm as possible. And you will fail at some point. It's a very sad thing, in a way, that you do, because you don't want to. But you will because you're a human being."

He added, "We just want to emphasize that and then try and let people off the hook a bit by saying, that just happens. We want people to see that they're not the only ones who are going through this. And it's not something that's particularly shown on TV, the kind of intensity of being a parent with young kids."

"There's a flying blindness to the generation of parents now that, um, wasn't necessarily the case before," Addison adds. "Because parenting has this weird sort of duality at the heart of it, which is that you love your children more than anything and would do anything for those creatures. But no one can make you angrier. No one can just push your buttons like your own kids. And that's a really odd thing that those two things happen to go together."

Blackwell likens the series' depiction of parenting to the version shown in "Catastrophe," a series that revolves around a relationship that starts off as a one-night stand and suddenly, unexpectedly expands into a flawed, loving, messy relationship.

The difference, Haggard explains, is the unfiltered outbursts. "When I read the first episode, I just thought, Oh, this is great 'cause I literally was living that," Haggard explained. She then describes the circumstances of her audition for the part of Ally, a self-taped effort that took place in the kitchen while her 4-year-old was watching a TV show that could be heard in the background, "and my baby was in their little car seat that I was sort of wobbling with my foot." She says she looked a bit angry in the recording, "while my boobs were leaking." So yes – what we're watching unfold onscreen comes from a very real place.

"Seeing someone swear at a child is what I love about the first episode," Haggard said with a laugh. "It's quite shocking, but it's also everyone has had a moment where they've done that, you know. Or several."

Freeman then offers the balance of those moments. "As long as you know that your kids know that they are loved, that means everything. It really is. Because we all know people who weren't very loved and they know it. And they didn't really feel it. And that's the worst thing you could do, not make them feel secure and loved."

Haggard adds,"And within that security and love, set boundaries."

While "Breeders" was dreamed up as a darkly honest, unfiltered comedy for the best of times, a person can only imagine how relatable it must be in a time when schools and day cares are closed and parents – the lucky ones, I should say – are stuck working at home with children who have no concept of the pressures bearing down on adults.

Should you choose to binge the first five episodes on Hulu, you will witness Paul and Ally facing the same challenge many middle-aged parents of toddlers are dealing with: caring for stubborn, aging parents at the same time as they're taking care of their young kids. Their accident-prone older son has led the local emergency room doctor to suspect them of being at best irresponsible or at worst, every good parent's nightmare: abusive.

The series thus far also explores the realities of postpartum depression, marital strain, and even death. And the kids are lovely and sweet, but also inconsiderate, stubborn and loud. Into this maelstrom saunters, for a time, Ally's irresponsible but loving father Michael (Michael McKean) who inserts himself into the chaos with little consideration of the toll his arrival has put on their already strained relationship. And this is all before life throws the family a massive curve ball.

This week's episode revolves around a significant tragedy that, despite its life-altering import, is not enough to give Paul and Ally a break from the wildness of their young children. But in the thickest part of it, they are fiercely supportive of one another, which is shown in a frantic scene that is at once cathartic and completely earned.

"No one looks back at having brought their kids up thinking, I aced that, I nailed that. I was a perfect parent," Blackwell said. "From the child's point of view, as an adult, you don't look back to your childhood and think that it was perfect. Because every therapist would be out of business if that was the case. So we're just trying to take some of the guilt away for people and say, you know, try and do your best as a parent. That's all."

Addison added, "Every time we show ["Breeders"] to somebody who has kids they go, 'Thank God – I thought it was just me. Cause you don't see it. People don't talk about parenting like this, but it is a fairly universal experience."

New episodes of Breeders" air at 10 p.m. Mondays on FX and debut the next day on Hulu.