Forget Trump: Welcome to the Free Republic of Reality. Here's our Declaration of Interdependence

Andrew Cuomo and Phil Murphy are leading the fight against this pandemic. They know our strength is together 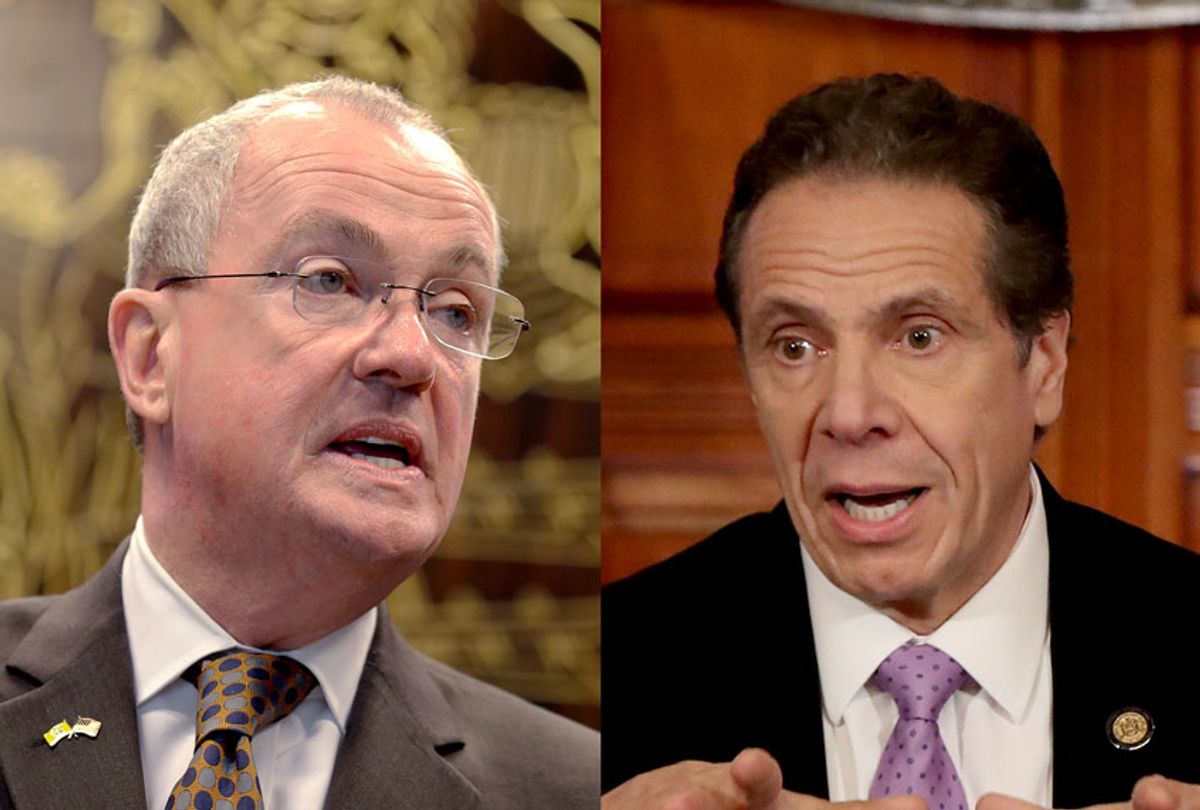 This was the week that the United States and our region became the global epicenter for the coronavirus pandemic.

Across the country, the national death toll rose past 2,000, with more than 40 percent of those deaths in New York City and New Jersey.

For weeks, as conditions continued to deteriorate here, our national government under the leadership of Donald Trump has been in various stages of denial and obfuscation. Since January, the administration has been responding to this deepening national emergency by trying to lay out a narrative that would help the president's re-election bid and keep Wall Street humming.

Not since the American Revolution, when England's King George III punished us for acting in our own self-interest, has our "national leader" been so out of touch with our real circumstances.

This has given rise to what I call the Free Republic of Reality, led by New York Gov. Andrew Cuomo, New Jersey Gov. Phil Murphy, Connecticut Gov. Ned Lamont and Pennsylvania Gov. Tom Wolf. These four Democratic governors formed a compact of mutual aid and support as a coordinated public health response to a rising death toll they could not ignore.

Our free republic did what a nation must do in a time of existential crisis, combined forces under the basic principle that all lives matter and that all commercial interests must be subordinate to the preservation of life.

Just what is government for if not that?

Last Tuesday, Murphy reported that New Jersey had recorded 17 COVID-19 related deaths, the most in one day since the start of the outbreak. With 3,675 cases at that time, our state now had the second-highest number of cases of any state in the nation.

The New York Times described an  "apocalyptic surge"  on Tuesday in which over one 24-hour period 13 patients died at Elmhurst Hospital in Queens, including one who was 38 years old.

The Times recounted that some patients died in the emergency room before getting a bed, while people stood outside all day waiting for the chance to get tested. Many ended up going home without being seen.

That same day, Kious Kelly, 48, a nurse at Mount Sinai Hospital in Manhattan, died from COVID-19. Basic protective medical gowns were in such scarce supply in the Mount Sinai system that nurses improvised by pressing Hefty-brand garbage bags into service.

It is hard to overstate the significance of the reports of COVID-19 infection and deaths among health care workers who are on the front lines of our war with this invisible killer.

When that line does not hold, as it did not for a while in China and Italy, there is the real likelihood of a collapse of the public health system — with dire consequences for the entire population as hospitals become hotbeds for the infection they are trying to suppress.

The Feb. 7 death of Dr. Li Wenliang, 34, a Chinese ophthalmologist who practiced in Wuhan, and who had been punished by officials for trying to warn his colleagues about the virus, was a key inflection point.

For weeks, much like President Trump, the authoritarian government in Beijing had tried to downplay the seriousness of the outbreak, including sanctioning the brave young doctor before he died. The heroic whistleblower was forced to falsely confess he had spread lies that sowed unnecessary public panic.

After wasting precious time, the Chinese national government reversed course and put tens of millions in Wuhan on a stringent lockdown. It was policed far more intensely than anything we are experiencing here and was accompanied by rigorous testing, tracing and fever surveillance.

Contrast that with the unmitigated living nightmare of Trump telling state governors to fend for themselves on the free market, in search of lifesaving personal protective gear like surgical and N-95 masks, as well as ventilators.

As my colleagues and I have reported at the Chief-Leader, the unions representing nurses and New York City's EMS service have warned that the CDC's expedient watering down of occupational health standards to compensate for the scarcity of equipment risks their members' health, their families and the very viability of our entire response.

By midweek, the FDNY 911 daily medical call volume exceeded 6,400, more calls than the department got on 9/11 when the World Trade Center was attacked and collapsed. New York City has prepared ad hoc morgues to handle what they expect to be thousands of deaths.

The chair of the New York City Council's Health Committee, Mark Levine, told MSNBC that the municipal hospital system "was already straining" and that "we may be in a situation where we don't have the staff, the equipment, the beds to adequately serve everybody."

He continued. "As for the morgues and the number of deaths, this is a city of 8.5 million people. There are projections that 50 percent of us will get the virus. Most of us would not need medical care … but if just 1 percent of the population were to succumb, that would be an event that would dwarf 9/11 by orders of magnitude."

In the crucible of this virulent scourge, the political subdivisions that had always defined us as New Jersey and New York don't matter. Something new has been forged that transcends those borders.

Our states are adjacent and intertwined, with bloodlines and familial ties of concern that knit us together closer than ever in this time of tribulation. With so many families hunkered down in our homes, we've become keenly aware of our neighbors. We are by necessity now so rooted in place, without the frenetic distraction of coming and going.

Now, the biblical instruction to "love thy neighbor" is the ultimate situational awareness because deep down we all know what our culture of hyperdrive commerce had let us forget.

Our fates have always been tied together like limbs of the same body. We now see an injury to one as an affliction that we all must bear, as we try to learn from each tragic loss to avoid the next one.

Our circumstances are intertwined, not as a spiritual abstraction or moral imperative but as a biological and scientific fact.

We know something is upon us of a scale that's beyond the edge of our lived history. The 1918 Spanish flu pandemic killed 50 million people around the world and 675,000 in the United States.

In our region New York City recorded 20,403 deaths, 3.9 per 1,000 residents in a city of five million, ranking it one of the more successful municipal public health responses to that pandemic.

By contrast, Philadelphia, with a population of just 1.5 million, recorded close to 13,000 flu-related deaths, just from the middle of September through November of 1918.

Decisions by municipal officials to hold a massive World War I bond parade, despite the virulent flu outbreak, not only had deadly consequences for the City of Brotherly Love but for southern New Jersey counties Camden and Gloucester.

Revisiting the news clips of the era, it becomes readily apparent that contagious disease is not warded off by borders, armed guards or the mighty Delaware or Hudson rivers.

In retrospect, public health experts credit the range of local responses, which included shutting down schools, commerce and public assembly, as what made the difference in the size of the local toll.

As it turns out, those jurisdictions that were the most proactive and aggressive in implementing these social distancing measures had greater success reducing their per capita death tolls.

As we await the latest grim overnight reports from our region's hospitals, we need to be heartened that with every passing hour the Free Republic of Reality grows.

It is a new nation born of necessity, informed by medical science, guided by the public health, and inspired by an unshakable love of our neighbor.