"Better Call Saul" and the two faces of JMM 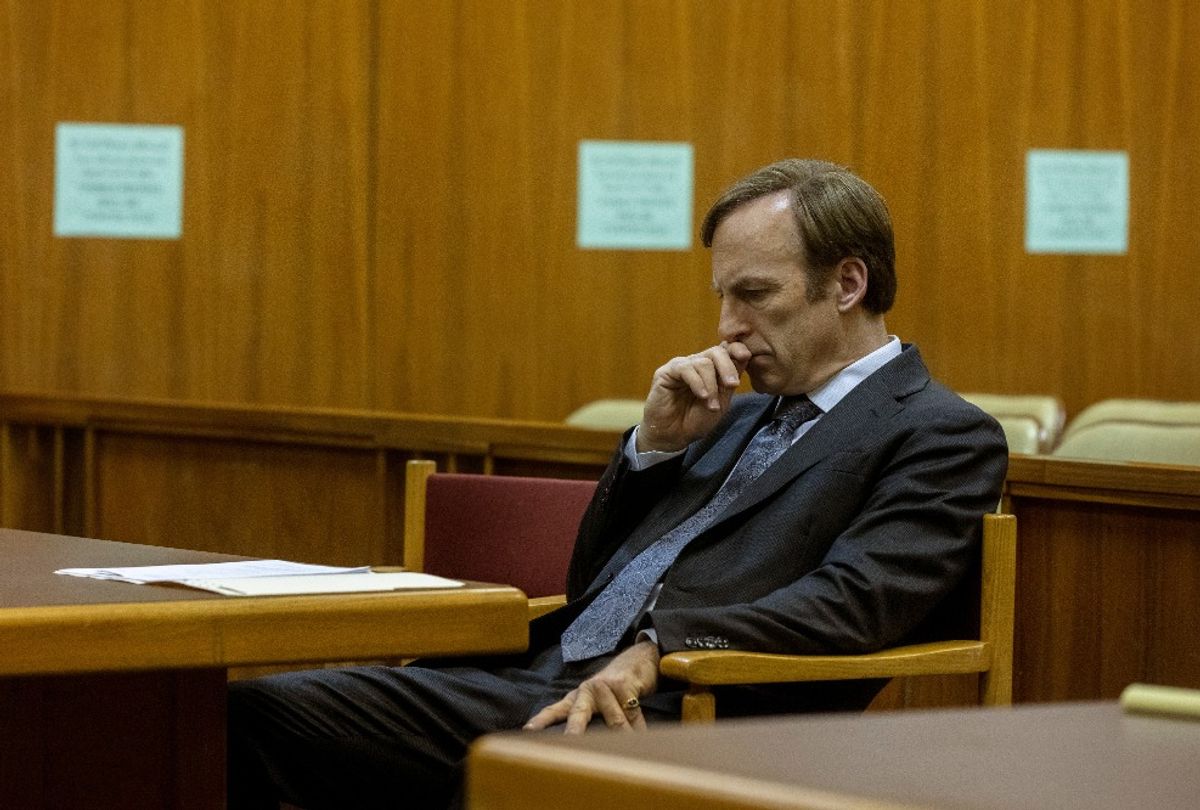 Spoiler alert: This story discusses key plot details of the AMC series "Better Call Saul" episode "JMM." If you're not caught up with the current season, stop reading now.

The monogrammed initials on Saul Goodman's briefcase, "JMM," were supposed to stand for the name Bob Odenkirk's "Better Call Saul" character was born with: James Morgan McGill. A name that has a distinguished air about it despite Jimmy's humble upbringing and his early years as Slippin' Jimmy the con man. He's still Jimmy when he's not on the clock – Jimmy, devoted life partner and now husband to straight-arrow lawyer Kim Wexler (Rhea Seehorn). The man who will use every tool at his disposal to win wealth and success, since gaining respect among his peers is unattainable.

Kim meant the briefcase to reward Jimmy for surviving a mourning process complicated by the suspension of his law license, and she had it monogrammed before she knew Jimmy would be practicing law as Saul Goodman moving forward from his reinstatement.

Once Jimmy punches in as Saul, all bets are off and the con man comes out. And that briefcase is a physical symbol of a threshold at which he finds himself in this episode, named for those initials. When a client, the ruthless cartel kingpin Lalo (Tony Dalton), first asks what "JMM" stands for, Jimmy as Saul replies, "Justice Matters Most." Lalo snickers dismissively and later in the episode, after dangling the proverbial offer Jimmy can't refuse in front of the scheming lawyer's face, suggests a new acronym for him: "Just Make Money."

Season 5 of "Better Call Saul" is the penultimate for the series, and thus far has made good on the tease Odenkirk made in an interview with Salon of being well past the midway point of the bridge between Jimmy's early identity and the one we know from "Breaking Bad." Previous seasons had viewers earnestly searching for signs of Saul Goodman's emergence and celebrating the first mention of his name, the first time Odenkirk's Jimmy debuts him to the public, and at last in the Season 4 finale, his official establishment within the legal community.

In this seventh installment – titled, yes, "JMM" – we see how the Saul persona's infectious influence will eventually grow beyond his creator's control, in the same way Slippin' Jimmy never quite went away. And straightaway "JMM" becomes one of the series' definitively important episodes, owing to the way it explores every major character's effort to maintain control of their identity's duality and how some are better at doing so than others.

Setting the stage for this is the no-frills courthouse wedding between Jimmy and Kim that opens the episode, one that Kim proposed in one of those "what?!" episode closing moments for which the show is famous. The love story between Jimmy and Kim is one of partnership, perseverance, and – here's that word again – survival. Kim has always stood by Jimmy, sometimes to the detriment of her physical well-being and career. She stands by him even after he emotionally cons her at the end of the fourth season, and crazy as it comes across, after he gets her the outcome she wants in an emotional case by duping her in front of her client and colleagues, she is so enraged at his betrayal that she proposes.

And the event that marks their status as husband and wife in the eyes of the law is a quick, no-frills affair with Huell (Lavell Crawford) serving as a witness. Kim, for her part, says her "I do" with a quiet, genuinely felt certainty while Jimmy masks his obvious anxiety as to how badly this could crack up by assuring Huell that this marriage is purely for legal cover, and to give them spousal privilege.

This comes in handy later when Lalo demands that Saul work his magic to get him out on bail and promises that if he can pull that off, he'll become a friend of the cartel. Kim and Jimmy agree that to maintain trust in their relationships, he has to agree never to blindside her again, and to let her know when he's having an itch to do something bad. So when he shares this information about what being a "friend of the cartel" means – massive wealth, mostly – Kim pauses and tells her husband she's glad he told her. "But," she asks, "do you want to be a friend of cartel?"

We already know the answer to this question from what we know of Saul on "Breaking Bad," and if we didn't already, Jimmy answers with the loudness and furor of an enraged drunk with a bullhorn at the end of the episode.

This season of "Better Call Saul" reminds us time and again that we're watching a tragedy that likes to hide from time to time in a clown suit. This important episode, written by Alison Tatlock and director Melissa Bernstein, marks a sharp turn towards everything going terribly wrong for the title character by setting the scene for his life to fall apart on multiple fronts. Jimmy McGill's trajectory is a student in corrosion, one we know has a miserable end in the distant future and likely a very disturbing one in the near term.

It's also a concrete parable of a situation that plays itself out in ways large and insignificant, all the time. What matters more, the greater good or sacrificing a few unfortunate and vulnerable souls to keep the economy roaring? What's better in the long run, doing the right thing now or an easy, lucrative act that stands to net high financial compensation down the road? This is the crossroads where we stand now, as a nation, and where the luckiest among us tend to find ourselves at some point in our lives.

For Jimmy, it is the line between remaining Jimmy McGill, generally a good guy who bends the rules for kicks and to get the job done, and Saul Goodman, the skilled and far-too-frequently underestimated trickster who favors wielding shock, awe, and chaos to get the job done instead of subtlety and civil compromise.

In a shabby Albuquerque courtroom Jimmy gazes for a moment at the loved ones of a murdered man whose name his homicidal client doesn't even remember. He allows the world around him to fade into static before suddenly, with zero transition, morphing into the predatory Saul.

Similarly to how "JMM" began, the second defining moment in the internalized war for dominance between Jimmy McGill and Saul Goodman also takes place in the courthouse, where Saul has performed well enough to secure bail for the conscience-free, homicidal Lalo.

As he covertly watches the family of Lalo's victim quietly mourn the injustice of the court's decision the split between "Justice Matters Most" Jimmy and "Just Make Money" Saul is never more evident. And this is before Howard Hamlin (Patrick Fabian) approaches Jimmy to ask him about the job offer he made to Jimmy to join Hamlin Hamlin McGill in a previous episode.

The offer comes after years of bad blood between Howard and Jimmy spurred on by his dead brother's poisonous sibling rivalry, and in the wake of the accusation that Jimmy has vandalized Howard's car with bowling balls and botched an important lunch meetings by sending hookers into the restaurant to loudly embarrass him. Howard, by the way, isn't there to follow-up but to remove the offer off the table. Before he gets that pleasure, however, Jimmy explodes not as himself, but as egomaniacal, unhinged and over-the-top Saul Goodman.

"You can't conceive of what I'm capable of! I'm so far beyond you! I'm like a god in human clothing!" he bellows in Howard's shocked face. "Lightning bolts shoot from my fingertips!" The speech is shocking and ridiculous in its bluster, and it's also a massive forward leap away from where "Better Call Saul" starts out with Jimmy McGill and toward the final, complete transformation showrunners Vince Gilligan and Peter Gould have imagined for Albuquerque's commercially successful criminal lawyer.

The themes powering "JMM" pierce through any ambiguity about how much of Jimmy remains in Saul Goodman by the time Walter White gets his hooks into him in "Breaking Bad." From what we can see at this point in the overall story the answer appears to be not much, if any bit of him is still in there at all. But what we're watching in this episode, more than many of the previous, is a man responding to a terminal diagnosis and acknowledging that time is running out for his previous life and identity.

And Jimmy is surrounded by similar studies in ethical duality, like Nacho (Michael Mando), the reluctant double agent working the angles between adversaries Lalo and Gustavo Fring (Giancarlo Esposito) while striving to keep his father alive.

Fixer Mike Ehrmantraut (Jonathan Banks) struggles to reconcile the brutal acts he facilitates or commits with his efforts to be a good man. His grim work and his skillful execution of awful tasks doesn't negate his propensity for tenderness such as reading "The Little Prince" to his granddaughter, or fixing the window of a woman nursing him back to health in a Mexican village where he wakes up after enduring a terrible beating.

Gus is more comfortable with navigating back and forth between his two identities. He is a legitimately skilled businessman and the owner of Los Pollos Hermanos, and he's also a guy building a meth syndicate behind the scenes and rising in the cartel world. He smiles and makes a polished presentation in a corporate boardroom in the same episode has him teaming up with Nacho, his mole in Lalo's crew, to vandalize his precious restaurant before burning it to a crisp in order to save his own skin.

Jimmy's choice has always been between pursuing legitimacy and acknowledgement of his undeniable legal talent, and bilking the grandstanding power brokers who look down their noses at him for everything he can. In response he created Saul Goodman in an act of frustration and shame, to act out his shameless impulses, let his shyster flag fly freely and without guilt, to get away with unscrupulous acts.

Recent episodes depict him using that power to bully tyrants into doing good. To help out Kim behind the scenes, he saves the home of a stubborn man who refuses to be forced off his leased land Mesa Verde, the bank that Kim represents, by way of ridiculous efforts to stall demolition crews and blackmailing the bank's chief executive. He also gains justice and significant compensation for a Native American artist whose work was appropriated without permission and used as the bank's logo.

People have long called upon trickster gods for a reason, remember. In the best stories they're there to balance some injustice in favor of the underdog, teaching the arrogant and the cruel a lesson by inflicting massive damage. They can be the surprise champions in the stories where Justice Matters Most.

The moral of "Better Call Saul" has never been about that, though. It's always been about money and petty revenge, and the shedding of a man's humanity as he realizes that it's the one thing preventing him from achieving greatness. It all starts with a name, and now we know it's not destined to end anywhere that's good – although it may be just.