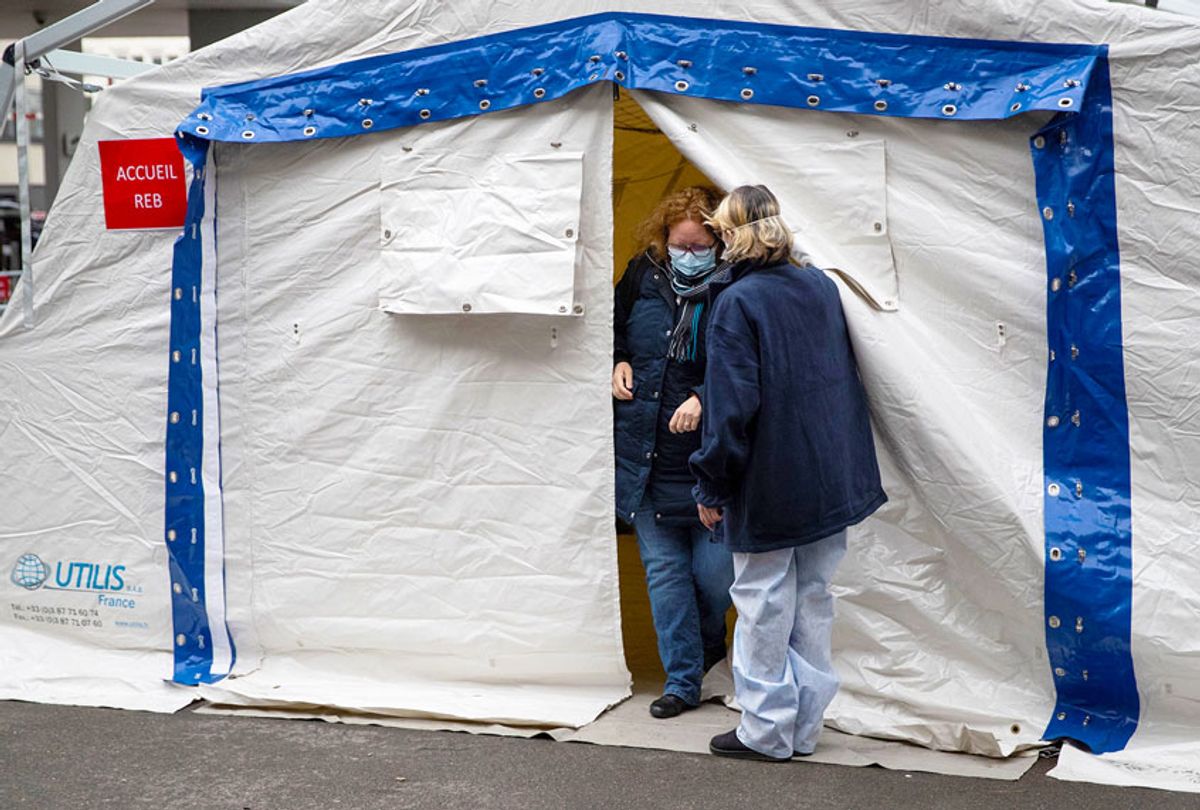 A nurse escorts a patient with covid-19 symptoms to a tent set up in a courtyard of the Henri Mondor Hospital in Creteil, near Paris, on March 6, 2020, to take blood sample as the novel coronavirus strain that erupted in China this year and causes the COVID-19 disease already left nine dead in France and made hundreds ill. (HOMAS SAMSON/AFP via Getty Images)
--

Emergency room doctors and nurses many of whom are dealing with an onslaught of coronavirus patients and shortages of protective equipment — are now finding out that their compensation is getting cut.

Most ER providers in the U.S. work for staffing companies that have contracts with hospitals. Those staffing companies are losing revenue as hospitals postpone elective procedures and non-coronavirus patients avoid emergency rooms. Health insurers are processing claims more slowly as they adapt to a remote workforce.

"Despite the risks our providers are facing, and the great work being done by our teams, the economic challenges brought forth by COVID-19 have not spared our industry," Steve Holtzclaw, the CEO of Alteon Health, one of the largest staffing companies, wrote in a memo to employees on Monday.

The memo announced that the company would be reducing hours for clinicians, cutting pay for administrative employees by 20%, and suspending 401(k) matches, bonuses and paid time off. Holtzclaw indicated that the measures were temporary but didn't know how long they would last.

In a follow-up memo sent to salaried physicians on Tuesday night, Alteon said it would convert them to an hourly rate, implying that they would start earning less money since the company had already said it would reduce their hours. The memo asked employees to accept the change or else contact the human resources department within five days "to discuss alternatives," without saying what those might be. The memo said Alteon was trying to avoid laying anyone off.

"It's completely demoralizing," said an Alteon clinician who spoke on the condition of anonymity. "At this time, of all times, we're putting ourselves at risk but also putting our families at risk."

Some co-workers are already taking on extra burdens such as living apart from their families to avoid the risk of infecting them, the clinician said. "A lot of sacrifices are being made on the front line that the administration is not seeing because they're not stepping foot in a hospital," she said. "I've completely lost trust with this company."

Other employers will soon follow suit, Holtzclaw said, citing conversations with his counterparts across the industry. "You can be assured that similar measures are being contemplated within these organizations and will likely be implemented in the coming weeks," he wrote.

However, another major staffing company for emergency rooms, TeamHealth, said its employees would not be affected. "We are not instituting any reduction in pay or benefits," TeamHealth said in a statement to ProPublica. "This is despite incurring significant cost for staffing in anticipation of surging volumes, costs related to quarantined and sick physicians, and costs for PPE as we work hard to protect our clinicians from the virus."

Private equity investors have increasingly acquired doctors' practices in recent years, according to a study published in February in JAMA. TeamHealth was bought by Blackstone Group in 2016; another top staffing firm, Envision Healthcare, is owned by KKR. (The staffing companies have also been implicated in the controversy over "surprise billing.")

Hospital operators have also announced cuts. Tenet Healthcare, a Dallas-based publicly traded company that runs 65 hospitals, said it would postpone 401(k) matches and tighten spending on contractors and vendors. Emergency room doctors at Boston's Beth Israel Deaconess Medical Center have been told some of their accrued pay is being held back, according to The Boston Globe. More than 1,100 staffers at Atrius Health in Massachusetts are facing reduced paychecks or unpaid furloughs, and raises for medical staff at South Shore Health, another health system in Massachusetts, are being delayed. Several other hospitals have also announced furloughs.

"We all feel pretty crestfallen," another ER doctor employed by Alteon said in a text message. "I did expect support from our administrators, and this certainly doesn't feel like that."

At Alteon, Holtzclaw wrote that the measures were necessary despite relief available from the $2 trillion stimulus that Congress passed last week. Those provisions include deferring payroll taxes, suspending reimbursement cuts and receiving advance Medicare payments.

Alteon's pay cut doesn't affect hourly rates for clinicians, but some of the people characterized as administrative employees are practicing doctors such as medical directors, according to one who spoke on the condition of anonymity. In his case, he said the cut amounts to about $20,000 a year.

"Every day I'm in county and federal emergency meetings. This is besides seeing patients. I'm doing more hands-on work right now than ever before," he said. "I'm getting calls 24/7 from the hospital administration, the county management team. I have not had a day off in over two weeks. And I'm working all this for 20% less."

The medical director said he understood the company has to cope with lost income, but he wished the leadership had let employees choose among a range of sacrifices that would best suit their individual circumstances.

"This decision is being made not by physicians but by people who are not on the front lines, who do not have to worry about whether I'm infecting my family or myself," he said. "If a company cannot support physicians during the toughest times, to me there's a significant question of integrity."

Another Alteon physician said he had been planning to ask for time off to go help out in New York, where the coronavirus outbreak is the worst in the nation. Now he has no paid time off, and he thinks his employer won't support him if he gets sick. He said if his pay drops he'll have to look for a new job.

"I have a huge loan payment. I have rent. I have groceries. I'm not going to sacrifice my life for when I get sick and they're going to say, 'You were replaceable,'" the physician said. "I cannot believe they did that to us."