Can you hide a pandemic? There's no need to believe Beijing on China's coronavirus success

U.S. intelligence reportedly claims China has cooked its coronavirus numbers — but that wouldn't be easy to hide 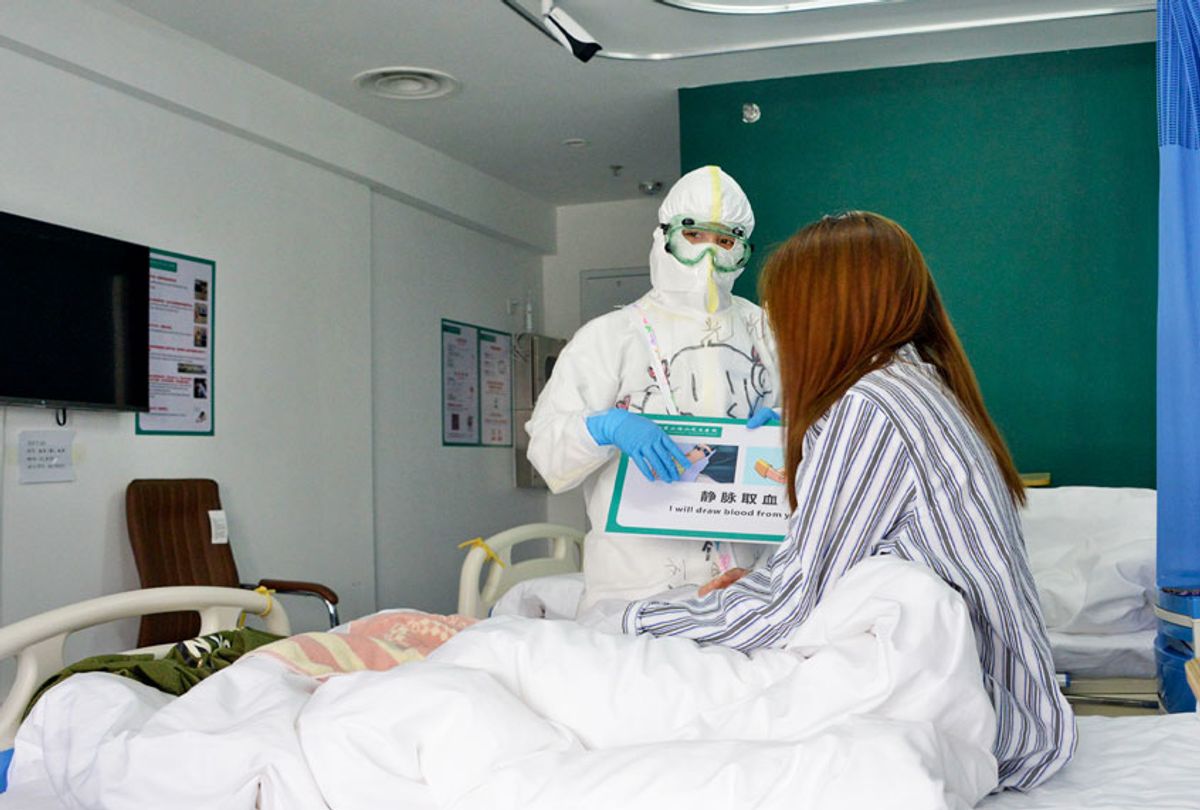 A medical worker communicates with a patient at Xiaotangshan Hospital in Beijing, capital of China, March 30, 2020 (Xinhua/Chen Zhonghao via Getty Images)
--

Bloomberg News (4/1/20) reported this week that anonymous U.S. officials say that a secret intelligence report concludes that China's statistics on the coronavirus outbreak are "fake":

China has concealed the extent of the coronavirus outbreak in its country, under-reporting both total cases and deaths it's suffered from the disease, the U.S. intelligence community concluded in a classified report to the White House, according to three US officials.

The officials asked not to be identified because the report is secret, and they declined to detail its contents. But the thrust, they said, is that China's public reporting on cases and deaths is intentionally incomplete. Two of the officials said the report concludes that China's numbers are fake.

Neither the Chinese government nor U.S. intelligence agencies are particularly trustworthy sources. So if they disagree about whether China's figures on its COVID-19 outbreak are accurate, as Bloomberg reported, is there any way to tell who's telling the truth?

Well, you could look at the report from the World Health Organization (2/28/20), which sent a team of international observers to China from Feb. 16 to Feb. 24 as the outbreak was still ongoing, talking to hundreds of Chinese doctors and other frontline health workers in hospitals, clinics and laboratories. As Dr. Bruce Aylward, the Canadian doctor and former WHO assistant director general who co-led the team, said in a press conference (2/24/20) presenting the team's findings:

I know there've been challenges with statistics that come out of China sometimes with the changing numbers. And [what] we have to do is look very carefully at different sources of information to say with confidence that this is actually declining. And when you get out into the field, there is a lot of compelling data and observations to support this decline….

I know people look at the numbers and ask what is really happening. And we do as well. I work for the WHO. Yes. But I have 12 people with me who work for the best institutions, researches and public health institutions around the world. They want to be convinced. And very rapidly, multiple sources of data pointed to the same thing: This is falling and it's falling because of the actions that are being taken. 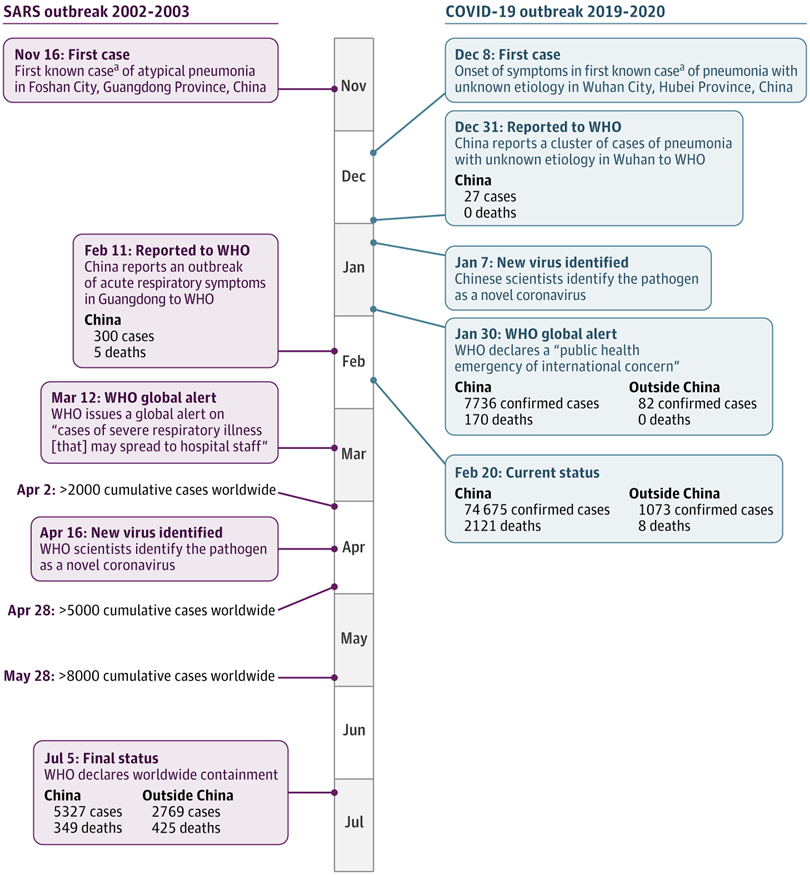 A report in the Journal of the American Medical Association (2/24/20) compares the response to SARS with the much quicker Chinese reaction to Covid-19.

Or you could look to the Journal of the American Medical Association, which has published many reports on the Chinese outbreak of Covid-19, including "Characteristics of and Important Lessons From the Coronavirus Disease 2019 (Covid-19) Outbreak in China" (2/24/20), which noted that "the Chinese government has improved its epidemic response capacity" since the 2002–03 SARS outbreak, when 88 days passed from the first case of SARS emerging to China notifying WHO of the epidemic, at which point there were 300 cases and five deaths. With Covid-19, by contrast, there were only 23 days between the onset of symptoms in the first case and China's warning to WHO on December 31, 2019, when there had been just 27 cases and no deaths.

Or you could look at similar reports in other leading medical journals, like "Early Transmission Dynamics in Wuhan, China, of Novel Coronavirus–Infected Pneumonia" (New England Journal of Medicine, 3/26/20) or "Estimates of the Severity of Coronavirus Disease 2019: A Model-Based Analysis" (Lancet, 3/30/20). If any of the thousands of researchers who have been scouring Chinese coronavirus statistics in search of patterns that could help defeat the pandemic elsewhere have detected signs of "fake" numbers, Bloomberg doesn't seem to know about it.

The reality is that it's very hard to hide an epidemic. Stopping a virus requires identifying and isolating cases of infection, and if you pretend to have done so when you really haven't, the uncaught cases will grow exponentially. Maintaining a hidden set of real statistics and another set for show would require the secret collusion of China's 2 million doctors and 3 million nurses — the kind of improbable cooperation that gives conspiracy theories a bad name.

China is slowly and carefully returning to a semblance of normalcy (Science, 3/29/20).  If China is merely pretending to have the coronavirus under control, the pathogen will rapidly surge as people resume interacting with their communities. Once international travel is restored, it will be quite obvious which countries do and don't have effective management of Covid-19. 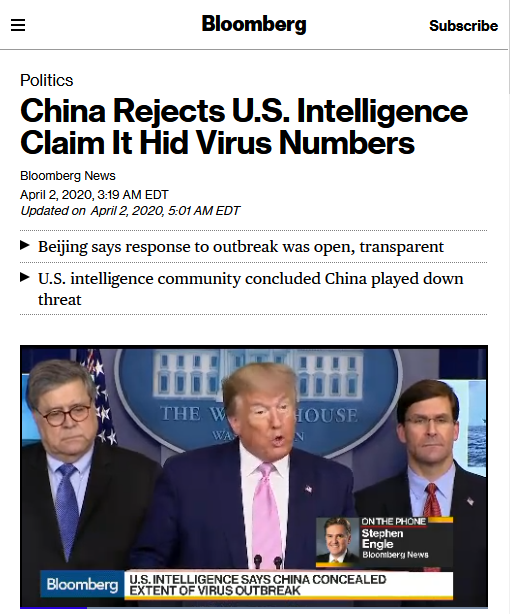 Chinese Foreign Ministry spokesperson Hua Chunying (Bloomberg, 4/2/20): "These slanders, smears and blame games cannot make up for the lost time, but will only cost more lost time and lives."

Until then, news outlets can serve the public by quoting health experts on the reliability of health statistics, rather than politicians. In a follow-up piece, Bloomberg (4/2/20) quoted Chinese Foreign Ministry spokesperson Hua Chunying ("Some U.S. officials just want to shift the blame," she said, plausibly enough) and Donald Trump, Vice President Mike Pence, Secretary of State Michael Pompeo and Sen. Ben Sasse, R-Neb. The only expert quoted was Dr. Deborah Birx, "the U.S. State Department immunologist advising the White House on its response to the outbreak," who said, "The medical community … interpreted the Chinese data as: This was serious, but smaller than anyone expected."

That's not how the Chinese data was interpreted by the WHO mission. As Aylward said at the press conference:

There is no question that China's bold approach to the rapid spread of this new respiratory pathogen has changed the course of what was a rapidly escalating and continues to be deadly epidemic…. that's what happens when you have an aggressive action that changes the shape that you would expect from an infectious disease outbreak. This is extremely important for China, but it's extremely important for the rest of the world, where this virus you've seen in the last few days is taking advantage to explode.