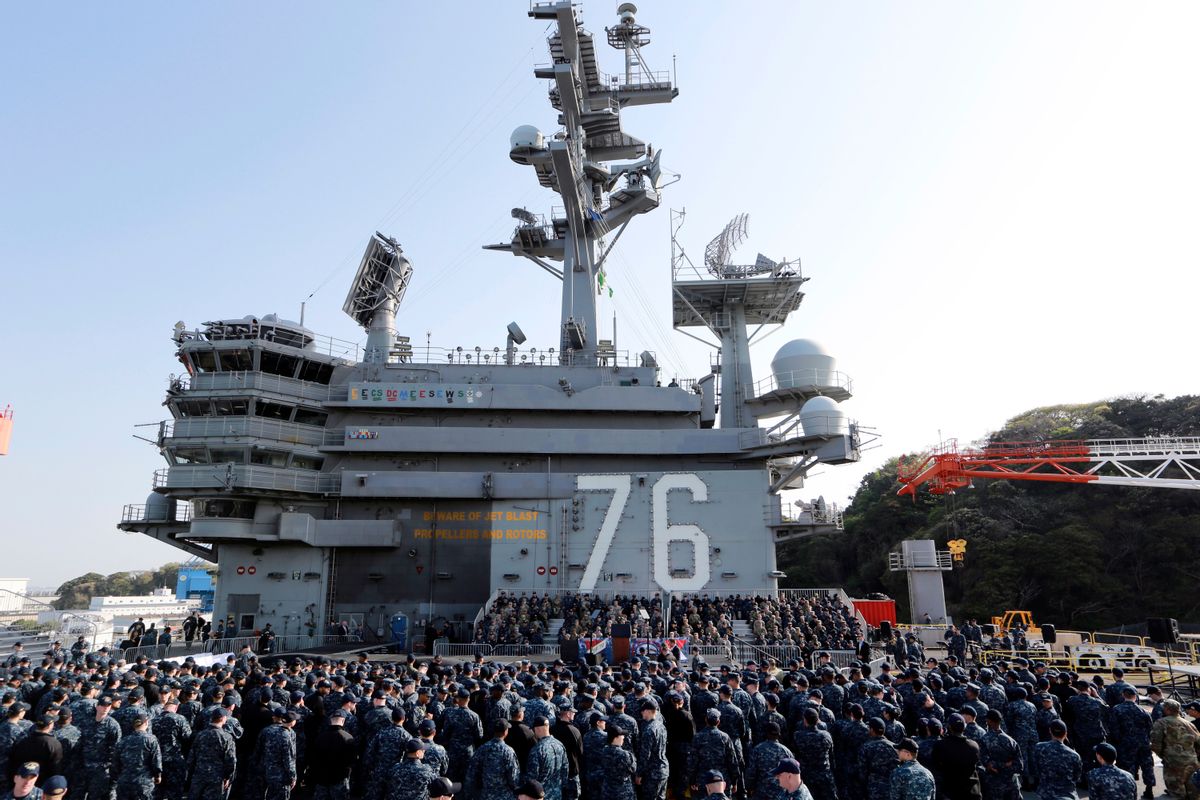 Navy officials announced Thursday that Capt. Brett Crozier, commanding officer of the sidelined aircraft carrier Theodore Roosevelt, has been relieved of duty in the wake of a leaked letter he penned pleading for U.S. intervention to stifle a COVID-19 outbreak on the 4,800-person ship.

Cozier's letter, which was first published by the San Francisco Chronicle, was reportedly sent up the captain's immediate chain of command in a "non-secure, unclassified" email that included "20 or 30" additional recipients, acting Navy Secretary Thomas Modly told reporters Thursday.

"[The letter] misrepresented the facts of what was going on," Modly said. "Okay, that's just not acceptable. … When I have a commanding officer who's responsible for a nuclear-powered aircraft carrier, with all that lethality and all that responsibility … that demonstrated extremely poor judgement in the middle of a crisis."

"Throwing the commanding officer overboard without a thorough investigation is not going to solve the growing crisis aboard the USS Theodore Roosevelt," the committee's statement read.

"What's more, we are very concerned about the chilling effect this dismissal will have on commanders throughout the Department of Defense. Dismissing a commanding officer for speaking out on issues critical to the safety of those under their command discourages others from raising similar concerns."

The unceremonious conclusion to Crozier's command signals the end of tumultuous nine-day unraveling of one of the Navy's most stalwart vessels.

On March 24 the command first reported that three of its sailors had tested positive for COVID-19. The infected crew were airlifted off of the ship as a precaution, but within one week confirmed cases in the ship's tight quarters spiked to nearly 100.

Navy officials responded by ordering the carrier to port in Guam, just over two weeks after the Roosevelt visited Da Nang, Vietnam. The decision to continue as scheduled with the Vietnam port call was made at a time when the country had only 16 confirmed cases, all of which were reportedly confined to the northern city of Hanoi, Chief of Naval Operations Adm. Michael Gilday said.

Pierside in Guam, Crozier earnestly wrote the letter that would cost him his job within a matter of days.

"We are not at war. Sailors do not need to die," he wrote. "If we do not act now, we are failing to properly take care of our most trusted asset — our Sailors."

Crozier proposed that the ship be evacuated, save for 10 percent of the crew who would remain onboard to operate critical systems. The remainder would move into isolated quarantine in Guam.

"Removing the majority of personnel from a deployed U.S. nuclear aircraft carrier and isolating them for two weeks may seem like an extraordinary measure," Crozier wrote. "This is a necessary risk. Keeping over 4,000 young men and women on board the TR is an unnecessary risk and breaks faith with those Sailors entrusted to our care."

Modly told reporters Thursday, however, that senior Navy officials were already well aware of the outbreak onboard the aircraft carrier and were taking necessary measures prior to the extensive distribution of Crozier's dispatch.

"What he did that was correct was recognize the situation that he needed to communicate on the ship," Modly said. "The manner in which he chose to do it — not going directly to his strike group commander who was right down the hall from him and talking it through — is the reason I have a problem.

"If he had walked in with that list of concerns to his immediate supervisor and said, 'Hey, let's work together on this.' And they work together on it … then we would not be here talking about this and that commanding officer will probably still be in command right now."

Modly added that making the letter publicly available — the Navy remains unaware of who leaked it — could especially impact families of sailors by burdening them with unwarranted concern.

"The reality of what's happening on the ship right now is we have about 114 sailors who have tested positive. Not a single one of them has been hospitalized," Modly said.

"So, it raised alarm bells unnecessarily. … It undermines our efforts and the chain of command's efforts to address this problem, and creates a panic and this perception that the Navy's not on the job, that the government's not on the job, and it's just not true."

The Navy is currently in the process of evacuating thousands of sailors off of the Roosevelt to be tested and potentially placed in yet-to-be-determined quarantine sites in Guam. Discussions between Navy officials and the governor of Guam have yielded the idea of using empty hotel space as one possible destination that would adhere to the single-occupancy, single-restroom standards recommended by the Centers for Disease Control and Prevention.

Approximately 2,700 sailors are expected to be removed from the ship over the coming days, Modly told reporters.

Navy officials, meanwhile, did not specify where Crozier would be assigned.

The 1992 graduate of the U.S. Naval Academy most recently spent a tour serving as the executive officer of the aircraft carrier Ronald Reagan followed by an assignment to command the amphibious command ship Blue Ridge.

The Roosevelt's executive officer, Capt. Dan Keeler, has assumed temporary command of the ship until the arrival of Rear Adm. Select Carlos Sardiello, who previously commanded the Roosevelt, the Pentagon announced.

"I did not come to this decision lightly," Modley said. "I have no doubt in my mind that Capt. Crozier did what he thought was in the best interests of the safety and well-being of his crew. … We have a responsibility to look out for them as well, but also to guard our national security mission and all the other sailors that are on all the other ships out there that may be put at risk by the actions of a particular commanding officer.

"That's that's the bottom line for me."