What is the American bard driving at with a 17-minute song on the JFK assassination? David Talbot thinks he knows 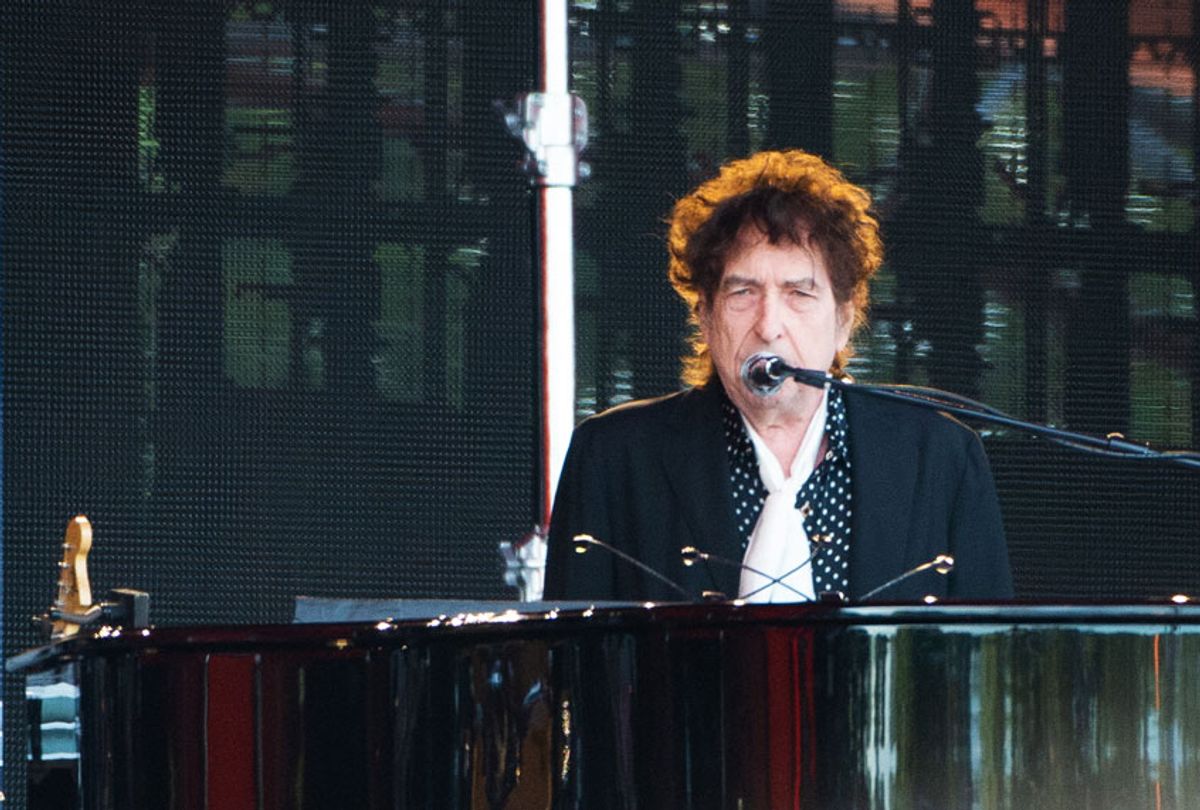 Bob Dylan's new song, "Murder Most Foul," arrives in the mailbox like a postcard from the apocalypse. In an effectively restrained voice, America's most important songwriter delivers an act of mourning for John F. Kennedy that enlarges into political prophecy, almost as if he is auditioning for authorship of a follow chapter to the book of Revelation.

The music is slow, almost appropriately like a dirge, and when a delicate touch of the piano bleeds into tearful string accompaniment, a space emerges for the singer's voice. He transports our mind's eye back to the vantage point of Dallas in November of 1963, promising that — no matter our age or ideology — we can also find the debris of our damaged souls at that same blood stained locale. As Dylan declares midway into "Murder Most Foul," we are riding to the "place where faith, hope, and charity died."

As America grew more commercially dominant and technologically powerful throughout the 20th century, it also transformed from a republic into an empire, accumulating during its metamorphosis a collection of characteristics that would usher in an era of political darkness. The seemingly disconnected acts of organized violence — in the jungles of Vietnam where America waged an unjust war, the inner cities where leadership exploited and abused the poor, the skies and rivers choking on the contamination of countless pollutants — all coalesced into a deep spiritual disease. It is a disease that reveals its gruesome symptoms yet again in this moment, as COVID-19 demonstrates the horrific fallout that results from separating citizens according to race and class, and deliberately neglecting the public good in the name of profit.

"Murder Most Foul" begins at the literal and figurative scene of the crime. Its opening lines communicate exactly where Dylan believes the country's "soul was torn away." It was not due to an accident, or even the unfortunate luck of Lee Harvey Oswald's aim, that JFK died, taking something essential in the American spirit with him in his last breath. According to Dylan, it was a planned execution by an unnamed "they."

The plural pronoun makes it clear that Dylan rejects the "lone gunman" theory of the Dallas assassination. The first verse has JFK, like Christ in Gethsemane, protesting his own fate, "He said, 'Wait a minute, boys, you know who I am?'/ 'Of course we do, we know who you are'/ Then they blew off his head while he was still in the car."

The "they" turns into a "we" with the boast, "We already got someone here to take your place." Within seconds of history — or a handful of lyrical lines — it is all over: "It happened so quickly, so quick, by surprise/ Right there in front of everyone's eyes/ Greatest magic trick ever under the sun/ Perfectly executed, skillfully done."

David Talbot, the founder of Salon and author of "Brothers: The Hidden History of the Kennedy Years" and "The Devil's Chessboard: Allen Dulles, the CIA, and the Rise of America's Secret Government," provides more specific identification of "they" than Dylan. I asked him, over an exchange of emails, for his interpretation, based on his years of research, including countless interviews with journalists and former government officials. He wrote:

I believe the 'they' Dylan is referring to is the high-level national security operation led by deposed CIA Director Allen Dulles that targeted Kennedy, who was trying to prematurely end the Cold War, and then engineered the cover-up of the crime. Dulles conveniently got himself appointed to the Warren Commission, which pinned the assassination solely on the conveniently dead Oswald, and then played such a dominant role in the official investigation that it should have been called the Dulles Report.

Dylan uses the power of song to amplify Oswald's own defense that he was no more than a "patsy" in the conspiracy to kill Kennedy, and he also identifies the same "they" as responsible for the death of Robert F. Kennedy, President Kennedy's attorney general and brother, who would also fall prey to an assassin less than five years later during his own presidential campaign.

Talbot's historical research and analysis, along with that of other revisionist historians like James Douglass, indicates that JFK and RFK were both breaking from the national security state at the hour of their respective deaths. The president's public rhetoric telegraphed an emphasis on peace, and a withdrawal from the imperialistic aims that his predecessor, Dwight Eisenhower, described in his famous farewell address, when he warned America about the dangers of the "military-industrial complex." It is impossible to assert counterfactuals with certainty, but many historians believe that even though Kennedy had initiated the Vietnam misadventure, it's unlikely he would have launched a full scale invasion of Vietnam.

Leftist intellectuals like Noam Chomsky, on the other hand, represent a faction that would argue Kennedy was no different, in ideology or policy, than other militaristic presidents. Dylan's nostalgic romanticization of a lost age, they might contend, is naive and misinformed. Talbot claims that Chomsky and other Kennedy skeptics lack information and perspective:

Chomsky and the late Howard Zinn — who were unable to perceive the obvious rupture between President Kennedy and his national security apparatus — have simply not done the exhaustive research that I and other revisionist historians like Douglass have done. Chomsky, et al., are captives of their own deterministic thinking and have not studied the voluminous documents or interviewed the hundreds of people whom I have, including many Kennedy insiders and national security advisers. When Arthur Schlesinger Jr. — the esteemed historian and a Kennedy White House adviser — told me "we didn't control the CIA or the Pentagon," that made me shiver.

"Murder Most Foul" both resembles Dylan's previous work and differs from it. Musically, it bears the most similarity to "Highlands" and "Ain't Talkin'" — two other lengthy ballads without traditional choruses in which the repetitive music, over an extended period of time, enables Dylan to adopt a hypnotic vocal effect as he speaks and sings, even when whispering, with the urgency of a tornado siren. All three songs, but most especially "Murder Most Foul," grow darker and ominous as each verse makes way for the next. "The age of the Antichrist has begun," Dylan sings in the new epic.

The demolition of the hope of the 1960s began with the assassination of JFK, and continued to haunt the surroundings of counterculture. Dylan makes the familiar comparison between Woodstock and Altamont — an outdoor Rolling Stones concert in California where the Hell's Angels, hired to provide security in an act of monumental stupidity, killed an 18-year-old attendee named Meredith Hunter.

References to music dominate the latter half of "Murder Most Foul." Dylan pleads with his nameless audience to "play" a roll call of great pop, country, blues, jazz, and rock and roll artists, in a seeming act of mourning for what is lost — both the physically and spiritually dead. There are lines when Dylan seems to offer the multicultural brilliance of American music as a source of comfort and a signpost toward redemption — "Play Etta James, play 'I'd Rather Go Blind'/ Play it for the man with the telepathic mind." There are also lines when Dylan's reference takes on the tone of a taunt, as if art and popular culture — even at its best — is little more than a diversion, a distraction from the horror of a president's blood spilling into the streets:

When Dylan cites the great music of the 20th century, calling out everyone from Thelonious Monk to Dickey Betts, "Murder Most Foul" almost becomes a waltz. But the music deconstructs back into dark dirge mode when Dylan turns to a commentary on what he himself is doing, making the song almost meta-musical.

The winner of the Nobel Prize for literature, who is famously adversarial with the press, anticipates how his own song will fall into the annals of entertainment, prompting music critics to exercise their microscopic attention spans and soup-bowl shallow understanding of the relationship between art and history.

"Play 'Marching Through Georgia' and 'Dumbarton's Drums,'" Dylan sings as he reaches his finale, "Play 'Darkness' and death will come when it comes/ Play 'Love Me or Leave Me' by the great Bud Powell / Play 'The Blood-Stained Banner,' play 'Murder Most Foul.'"

As if on Dylan's cynical command, most critics have so far focused on the 17-minute running time of "Murder Most Foul." The New Yorker offered the dazzling insight that the song is "weird," and NPR made the critical contribution of publishing an alphabetical list of all the songs Dylan references in the lyrics. No major publication has run a review that devotes any time to dissection of Dylan's use of plural pronouns when naming Kennedy's killers.

David Talbot sees higher stakes in "Murder Most Foul" than its qualification as Dylan's longest song:

There is a clear parallel between the assassinations of the 1960s — including the Kennedy brothers, Martin Luther King Jr. and Malcolm X — and the devolution of American democracy. In my lifetime we've seen the presidency steadily deteriorate, from the New Frontier of President Kennedy to the new Dark Ages of Donald Trump. Dylan signaled that he was prompted to release this stunning song about America's decline by the current pandemic, which has exposed the sickness and corruption of our institutions and leadership.

Bob Dylan has always played coy with his labeling as the "voice of a generation," and has often dismissed the investment many fans and scholars make in the interpretation of his lyrics. Frustrated with journalists in the late 1960s, he famously and charmingly referred to himself as a "song-and-dance man."

With the release of "Murder Most Foul" in a time of extreme American pain and need, Dylan has embraced his unique cultural and artistic authority to present a prophetic examination of American decline, taking a musical magnifying glass to the erosion of America's historical promise and the "slow decay," to use his words, of the American soul.

The 78-year-old Dylan is not the commercial juggernaut he was in previous decades, but his new songs always attract attention. "Murder Most Foul" already has 2.2 million plays on YouTube. The popular reaction to the song, as with the response to coronavirus, the attacks of 9/11, and the JFK assassination itself, will demonstrate the difference between hearing and listening.