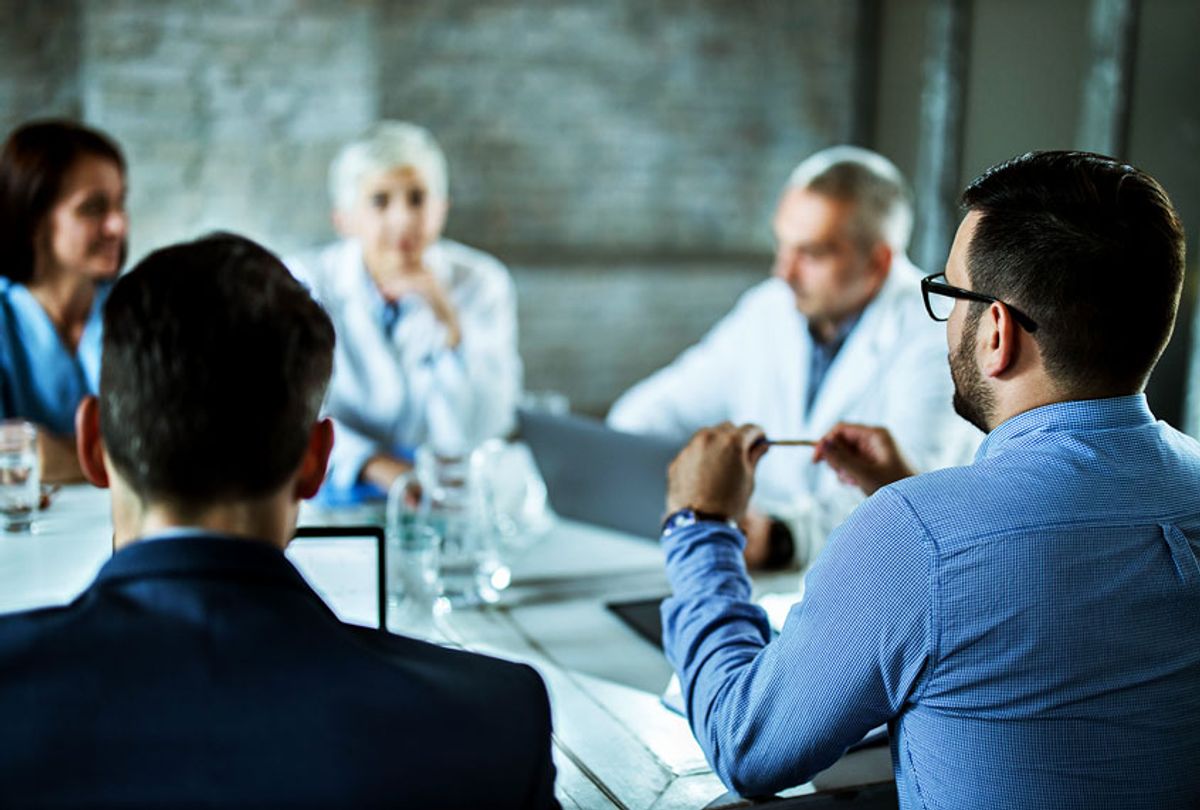 Businessmen having a business meeting with team of doctors at doctor's office. (Getty Images)
--

Private health insurers are expected to raise premiums by as much as 40% to recoup the costs of coronavirus testing and treatment, according to a new analysis from Covered California, the state's health care marketplace.

Though it remains unclear how much the coronavirus crisis will ultimately cost in health care expenditures, insurers will be submitting their 2021 rates to state regulators next month. Analyzing a wide range of models, Covered California expects that this year's care associated with the virus will cost between $34 billion and $251 billion, or between 2% of premiums and 21% of premiums. The analysis estimates that insurers would price the costs at double the rate into their 2021 premiums, projecting increases that range from as little as 4% to more than 40% for the 170 million workers and individuals who have private plans.

"Covered California's analysis shows the impact of COVID-19 will be significant, and that absent federal action, consumers, employers and our entire health care system may be facing unforeseen costs that could exceed $251 billion," said Peter V. Lee, the executive director of the marketplace. "Consumers will feel these costs through higher out-of-pocket expenses and premiums, as well as the potential of employers dropping coverage or shifting more costs to employees."

Setting next year's premiums will not be as simple as increasing the rates at double the costs of the 2020 care. Their proposed rates must reflect their "expected costs in 2021, not what they spent in 2020" to get approval from state health exchange regulators, Dave Dillon of the Society of Actuaries explained to Vox.

"Issuers are not allowed to include past losses in prospective premium rates if those costs are not expected to persist," he said. "Therefore, for the majority of health insurance issuers, premiums would not be expected to increase as a result of Covid-19-related costs if the pandemic is limited to 2020."

"Nowhere in those calculations can they say, 'We're gonna lose this much money in 2020,'" agreed Cynthia Cox, the senior vice president at the Kaiser Family Foundation.

If the virus stretches into next year, insurers can project higher costs. But the costs of the pandemic are not limited to testing and hospitalization over the upcoming months even if the spread wanes. A vaccine is not expected to be available until at least 2021, and top health officials have said that wide-scale immunization is the only way to contain the virus longterm. Pharmaceutical companies are also testing a range of therapeutic options that could also add to the overall cost.

And although insurers cannot set increases based on the previous year's losses, they are able to raise premiums if they are forced to dip into their existing capital reserves, which became more likely after numerous top insurers announced they would waive co-pays and out-of-pocket costs for coronavirus testing and treatment.

Insurers set their 2020 premiums in mid-2019 with "no hint of coronavirus on the horizon," Lee told The New York Times. "No insurer, no state, planned and put money away for something of this significance."

"Regulators would take a sharp eye to big premium increases," added John Bertko, the chief actuary for the California marketplace, but if insurance companies "chew up half or more of their solvency reserves, regulators will say they need to build them up."

A separate analysis by S&P Global Ratings found that insurers would be able to absorb a 3% to 4% increase in medical costs but increases between10% to 12% would force them to use their reserves.

Some experts think the cost projections are overblown.

"We think claims are really going to drop off over the next month or two," Edward Kaplan of the corporate consulting firm Segal told The Times, predicting that hard-hit New York may see costs increase by 4% to 5% but other areas would see lower increases if any.

But Lee noted that "everybody is still guessing what a coronavirus hospitalization stay looks like."

Though estimates show that typical pneumonia hospitalizations cost about $20,000, Covered California projects that the average for severe coronavirus cases will be closer to $72,000.

Insurer costs will also be greatly affected by the decision to bar elective surgeries in most states to preserve hospital capacity and personal protective equipment for health workers. Insurers could argue that they expect to see a large increase in demand for elective procedures in 2021 because of a months-long delay. But Dillon pointed out to Vox that this also cuts both ways since these insurers can "offset" this year's coronavirus costs with the savings on elective surgeries.

The Covered California analysis projects that, on the high end, costs associated with the virus would add about 20% to the current $1.2 trillion in annual costs. But Lee admitted that it would impossible to know at this point.

It's also possible that insurers may decide to pull out of the insurance marketplaces altogether, leaving 20 million people who get their insurance through the exchanges without coverage.

"They might decide not to participate if it's too hard to predict what their costs are going to be," Cox told Vox.

Lee agreed that millions "may lose their coverage and go without needed care as we battle a global health crisis."

For now, insurers are calling on Congress to provide financial assistance to help insurers absorb these costs.

"Health insurance providers are covering COVID-19 tests and needed treatments. As more people seek coverage and care due to this pandemic, this temporary, emergency program would protect Americans from the consequences of potential catastrophic costs," the two top health insurance trade groups said in a letter to Congressional leaders last month.

Some employers and others also launched the Alliance to Fight for Health Care to urge Congress to approve a federal reinsurance program that would help cover the costliest medical claims and "solutions to support special enrollment periods."

Congress appears to be working toward this sort of program in the House Democrats' latest proposal for the next phase of coronavirus relief. The proposal would create a two-year program that would "provide payments to individuals and small group market plans for extreme losses and help mitigate premium increases for consumers."

Bertko said that Congress, which is on recess until April 20, must act as quickly to prevent these premium increases.

"Given that insurers will be submitting 2021 rates in May and finalizing them around July 1, congressional action is needed very soon in order to affect 2021 premiums," he said in a statement. "While there is a lot of uncertainty with anything related to COVID-19, one thing we can be certain of is that the impact will be significant, and now is the time to take action."

Lee said that this program was necessary to protect the public, not the insurance companies.