Everything we know about coronavirus and your pets

After a zoo tiger in New York tests positive, concern mounts that pets can contract COVID-19. Here's what we know 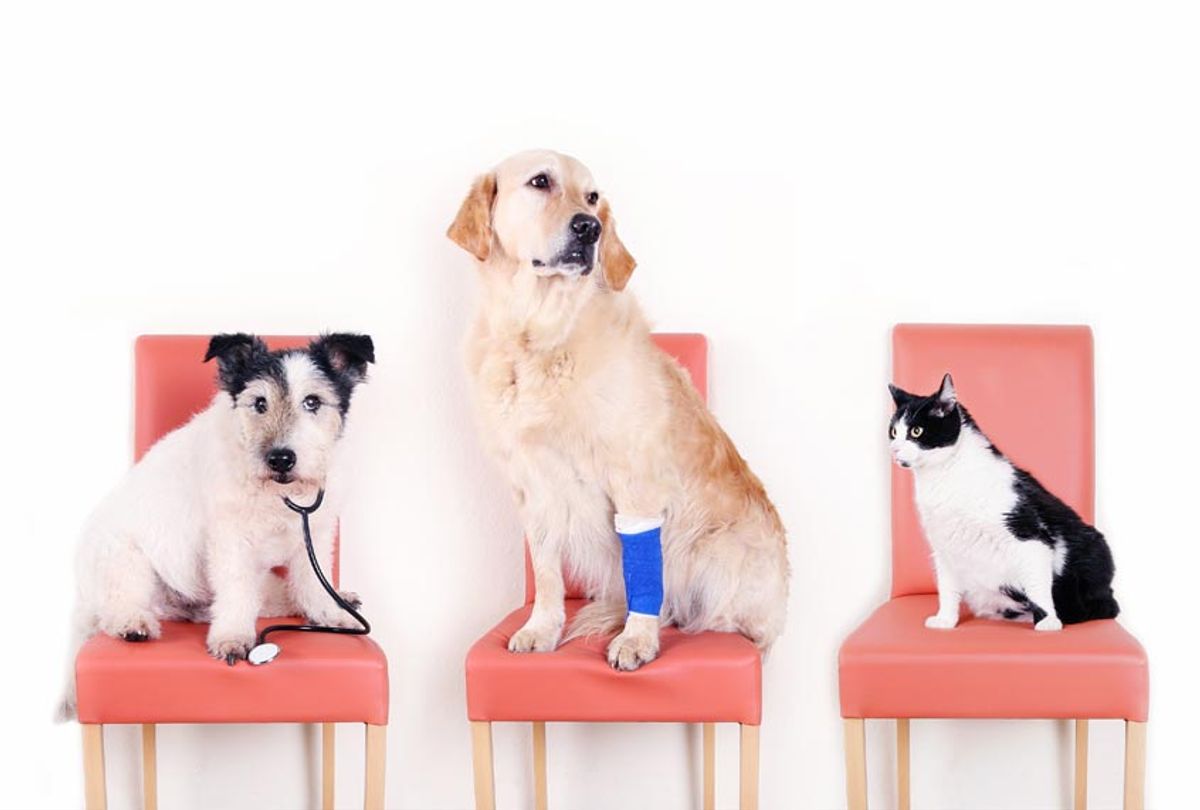 Two dogs and cat waiting for the Vet (Getty Images)
--

News surfaced yesterday that a tiger at New York's Bronx Zoo tested positive for the novel coronavirus. The discovery raises new questions about whether pets can contract the virus, and if it is contagious from pets (or zoo animals) to humans.

Nadia, a four-year-old Malayan tiger who lives at the Bronx Zoo, was suffering from a dry cough and loss of appetite, which prompted the test for novel coronavirus. Nadia's symptoms were first noticed on March 27, and zoo officials decided to test her "out of an abundance of caution," according to a statement from the Wildlife Conservation Society.

Fortunately, Nadia is expected to recover, but it is likely she isn't the only zoo animal infected. While tests have yet to confirm positive coronavirus results, other cats at the zoo — including Nadia's sister Azul, two Amur tigers and three African lions — developed dry coughs as well. The zoo believes that a caretaker with novel coronavirus infected the cats before developing any symptoms.

"Though they have experienced some decrease in appetite, the cats at the Bronx Zoo are otherwise doing well under veterinary care and are bright, alert, and interactive with their keepers," the statement read. "It is not known how this disease will develop in big cats, since different species can react differently to novel infections, but we will continue to monitor them closely and anticipate full recoveries."

This is the first known coronavirus infection of an animal in the United States, and in a tiger anywhere around the world. As the zoo emphasized on Twitter, the test used for Nadia is not the same test used for humans. The results were confirmed by the United States Department of Agriculture's National Veterinary Services Laboratory in Iowa.

Still, pets have tested positive for the coronavirus, albeit on other continents. As questions abound over human-to-animal transmission, here's what we know so far.

Cats are at risk of getting COVID-19

According to new research by scientists at Harbin Veterinary Research Institute, in China, five domestic cats were intentionally exposed to high doses of the novel coronavirus, known scientifically as SARS-CoV-2. In the experiment — whose results were posted on bioRxiv, but have to be peer reviewed — two of the cats that were euthanized had viral RNA in their upper respiratory tracts. The remaining three cats were placed in cages next to three uninfected felines. Later, researchers detected viral RNA in one of the exposed cats, which suggests that it got infected from a droplet from one of the three infected cats. More tests are needed to scientifically conclude cat-to-cat transmission.

Intriguingly, despite being infected, none of the infected house cats showed symptoms of illness.

A separate study of feral cats in Wuhan, which is also not yet peer reviewed, showed that some had antibodies to the coronavirus, suggesting that they did have some level of exposure to the coronavirus. The cats weren't ill while tested.

According to The Centers for Disease Control and Prevention (CDC): "We are still learning about this virus, but we know that it is zoonotic and it appears that it can spread from people to animals in some situations."

If you are sick with SARS-CoV-2, or suspect you have it, the CDC recommends treating a pet like a human in your household (regardless of species) and keeping social distance.

"Although there have been no reports of pets becoming sick with COVID-19 in the United States, it is still recommended that people sick with COVID-19 limit contact with animals until more information is known about the virus," the CDC states.

Can humans get the coronavirus from cats?

There is no evidence that suggests humans are getting the coronavirus from cats, or any pets. The CDC asserts:

"The virus that causes COVID-19 spreads mostly from person to person through respiratory droplets from coughing, sneezing, and talking. Recent studies indicate that people who are infected but do not have symptoms likely also play a role in the spread of COVID-19. At this time, there is no evidence that companion animals, including pets, can spread COVID-19 to people or that they might be a source of infection in the United States."

Several health officials have reiterated this. Karen Terio, head of the Zoological Pathology Program at the University of Illinois veterinary school (where tests for the Bronx Zoo tiger were conducted) told the New York Times: "Given the number of people in this country that have been infected with the virus and have become ill, and the number of people in this country that own domestic cats, it seems fairly improbable that cats are an important source of the virus for people if the first case we're diagnosing it in is a tiger."

Can dogs, or other house pets, get COVID-19?

According to the same study of the cats from the researchers at Harbin Veterinary Research Institute, dogs are not really susceptible to the infection. Chickens, pigs and ducks are not likely to get infected, either. Similar to the way the researchers studied cats, five 3-month beagles were administered high doses of the coronavirus, and housed with two beagles who weren't exposed. Swabs were collected from the animals every two days for the next two weeks. Researchers detected viral RNA on the second and sixth days in a couple dogs who were inoculated in their feces, but none of the dogs contained the infectious virus. "These results indicate that dogs have low susceptibility to SARS-CoV-2," the researchers concluded. The researchers also investigated the susceptibility of pigs, chickens, and ducks, and concluded they aren't likely to get infected, like dogs.

In Hong Kong, two dogs tested positive for COVID-19. The first one, who was 17 years old, died after having a "weak positive" test result, according to South Morning China Post. "It is very likely that the two positive cases [in Hong Kong] are examples of human-to-dog transmission,"  Malik Peiris, a leading public health virologist at the University of Hong Kong, told the South Morning China Post.

Ferrets, on the other hand, have a similar susceptibility as cats.

Can you get the coronavirus by petting an animal?

Again, there's no evidence right now to suggest that if you pet a dog that has been sneezed on by an infected person, you'll get infected yourself. While you should always wash your hands before and after petting an animal, and ask the owner for permission to pet while practicing social distancing, experts aren't as worried about this as being a source of transmission. The American Veterinary Medical Association (AVMA) Chief Veterinary Officer Gail Golab told the Washington Post: "We're not overly concerned about people contracting COVID-19 through contact with dogs and cats."

"The virus survives best on smooth surfaces, such as countertops and doorknobs," Golab said. "Porous materials, such as pet fur, tend to absorb and trap pathogens, making it harder to contract them through touch."