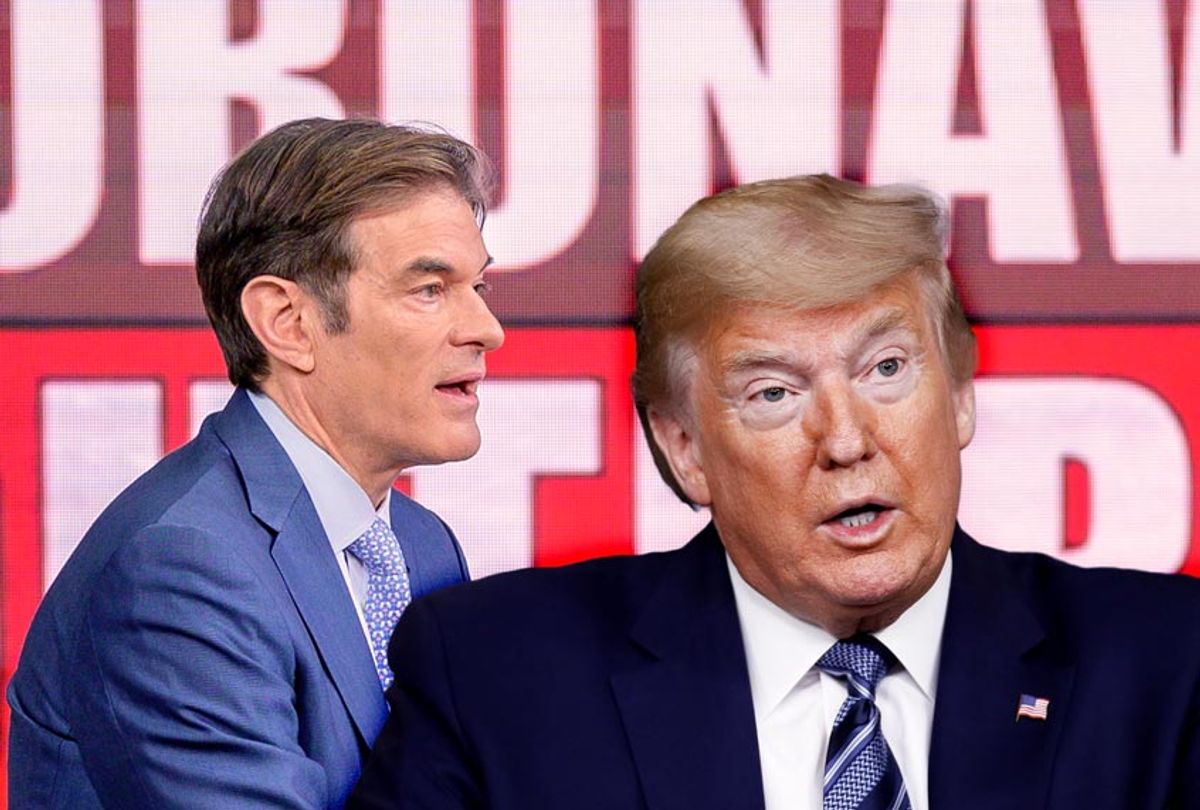 Oz, who has been repeatedly called out by other doctors as a "quack" for pushing discredited "miracle" health products, has frequently espoused the virtues of the malaria drug hydroxychloroquine as a coronavirus treatment on Fox's airwaves.

Trump has also promoted the unproven drug treatment for the new coronavirus at his news briefings despite top health experts like Dr. Anthony Fauci dismissing claims that the drug is effective in coronavirus cases as "anecdotal." Trump economic adviser Peter Navarro got into a heated altercation with Fauci at a recent White House coronavirus task force meeting over that description, according to Axios.

As Fauci has pushed back on Trump's claims, the president has "specifically made a point of telling aides that he was interested in what Oz had to say and that he wished to speak" to him, The Daily Beast reported. Trump previously named the doctor to his council on sport, fitness and nutrition.

Oz has appeared on Fox networks 21 times since March 24, frequently promoting the unproven drug, according to the report. Most of these interviews have come on heavily pro-Trump shows like "Fox & Friends" and with such as Sean Hannity and Lou Dobbs. Meanwhile, he has not appeared on NBC News in more than a month despite being a member of the "coronavirus crisis team" on the "Today" show.

Trump reportedly told top health officials that it would be a "good idea" if they spoke with the doctor.

Oz discussed his call with Verma on Fox News last week, explaining that he urged her to use the agency's data to compare coronavirus infection rates in patients taking hydroxychloroquine and those who do not. Along with malaria, the drug is commonly used to treat lupus and rheumatoid arthritis.

"It's a rough-and-tumble study, but she's agreeing to do it, or look into it, anyway," Oz said.

"It is very annoying to some of us that Dr. Oz is trying to poke his head in and get more involved in this," one official told The Daily Beast. "This shouldn't be a celebrity showcase."

Fauci has personally pushed back on Oz's claims during his own appearances on Fox News.

"Although there is some suggestion with [a recent hydroxychloroquine] study that was just mentioned by Dr. Oz . . . I think we've got to be careful that we don't make that majestic leap to assume that this is a knockout drug," he said last week on "Fox & Friends."

Oz has criticized Fauci as well, complaining Monday about his use of the term "anecdotal" to describe the evidence that the drug is effective against the virus. A small French study and a small Chinese study found contradictory results about the drug's effectiveness.

"That is an incorrect description of where this medication is now," Oz claimed. "There's no question it's not proven to be beneficial in a large clinical trial, as we expect in America . . . But these have been supported with case studies."

Oz went on to demand that Fauci "respect" the studies.

But other doctors who do not spend their time promoting unproven drug treatments on Fox networks disagree.

"This drug has major side effects," Dr. Megan Ranney, an emergency room physician at Brown University, told ProPublica, "including paranoia, hallucinations, suicidal thoughts, suppression of your blood counts, so you became more susceptible to infections. It can cause severe cardiac arrhythmias that can even cause death. Now, these are not common side effects, but they're common enough that they should not be taken just willy-nilly. It is not like water. It is not harmless."

The Centers for Disease Control and Prevention warned that unsupervised use "can cause serious health consequences, including death" and said the drug's efficacy "to either prevent or treat this infection are unknown."

The Department of Health and Human Services also warned that clinical trials were needed to "provide scientific evidence that these treatments are effective."

Other countries have issued warnings against using the drug after Trump's claims.

Meanwhile, the public promotions of the drug have led to shortages for patients who need it to treat lupus and arthritis. The American Medical Association and top pharmacist organizations warned of "grave consequences for patients with conditions such as lupus or rheumatoid arthritis if the drugs are not available in the community."

The warnings have not stopped Trump from promoting the drug regularly, even claiming over the weekend that he is considering taking the drug himself. Trump previously argued that "the worst doctors (by far) are celebrity doctors."

More dangerous could be medical advice from individuals who, like Trump, have no scientific background.

Trump attorney Rudy Giuliani told The Washington Post that he has also been one of the top voices in the president's ear promoting hydroxychloroquine. Giuliani has repeatedly hyped the drug on Twitter, leading the social network to delete one of his tweets promoting the drug for running afoul of its misinformation policy.

"We've got to take a little risk, god dammit, if we want to save lives," he added. "We are looking at a slaughter."